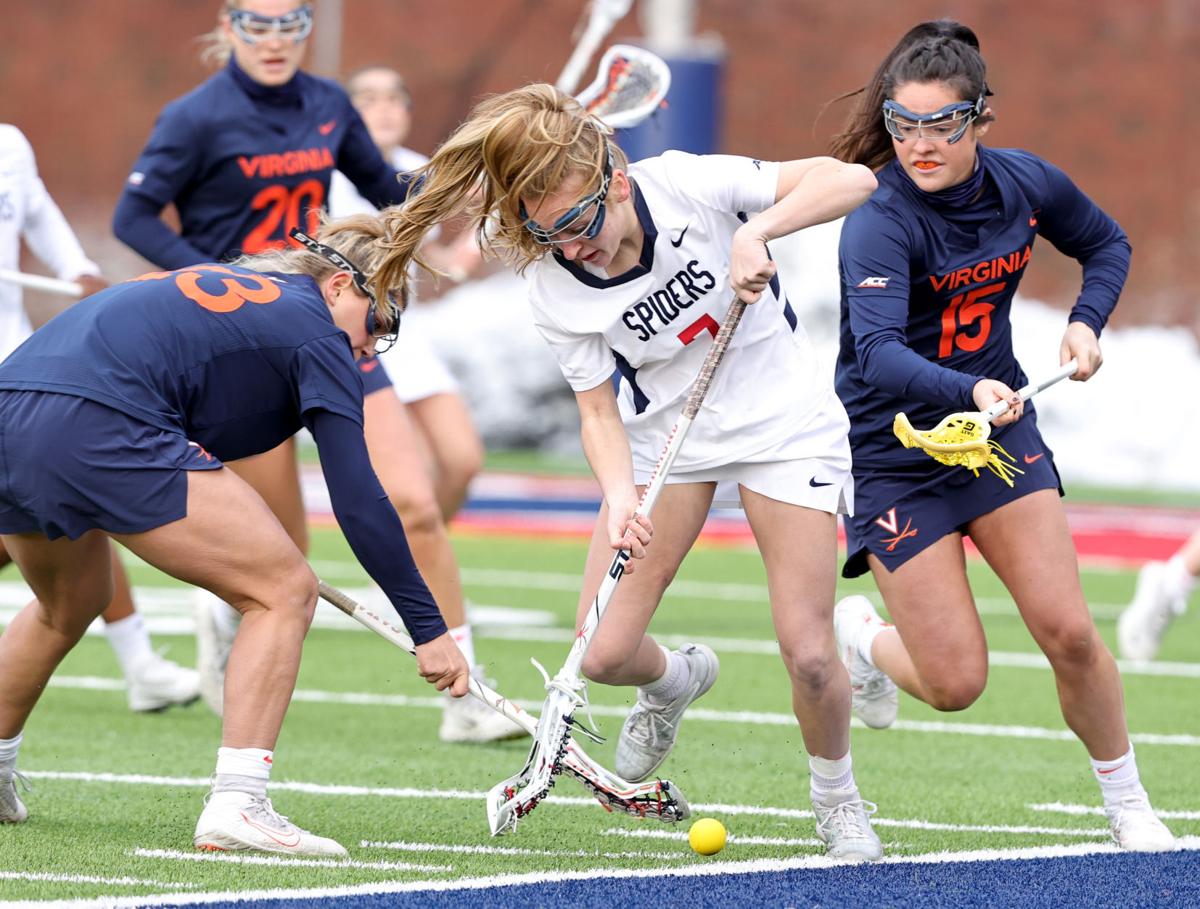 UR’s Sophia DiCenso (center) battles for control with Virginia’s Kiki Shaw (left) and Aubrey Williams during their game at UR. 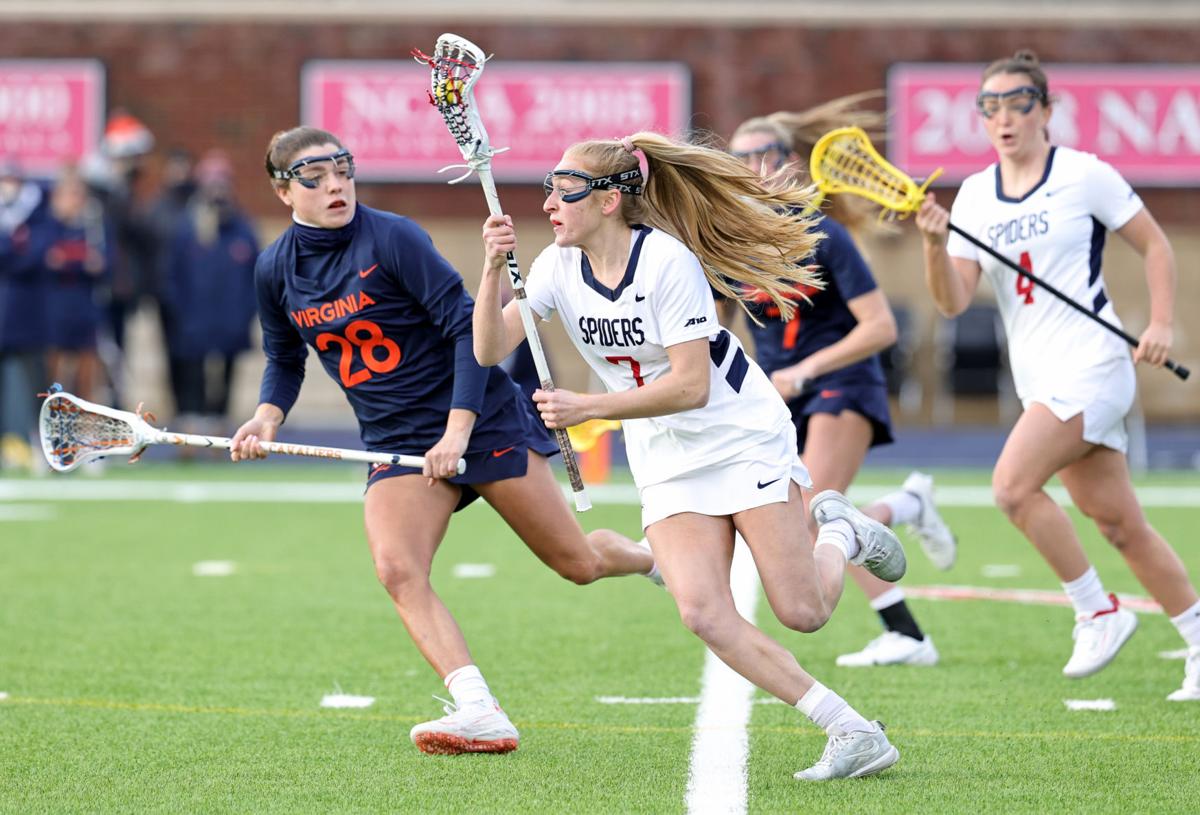 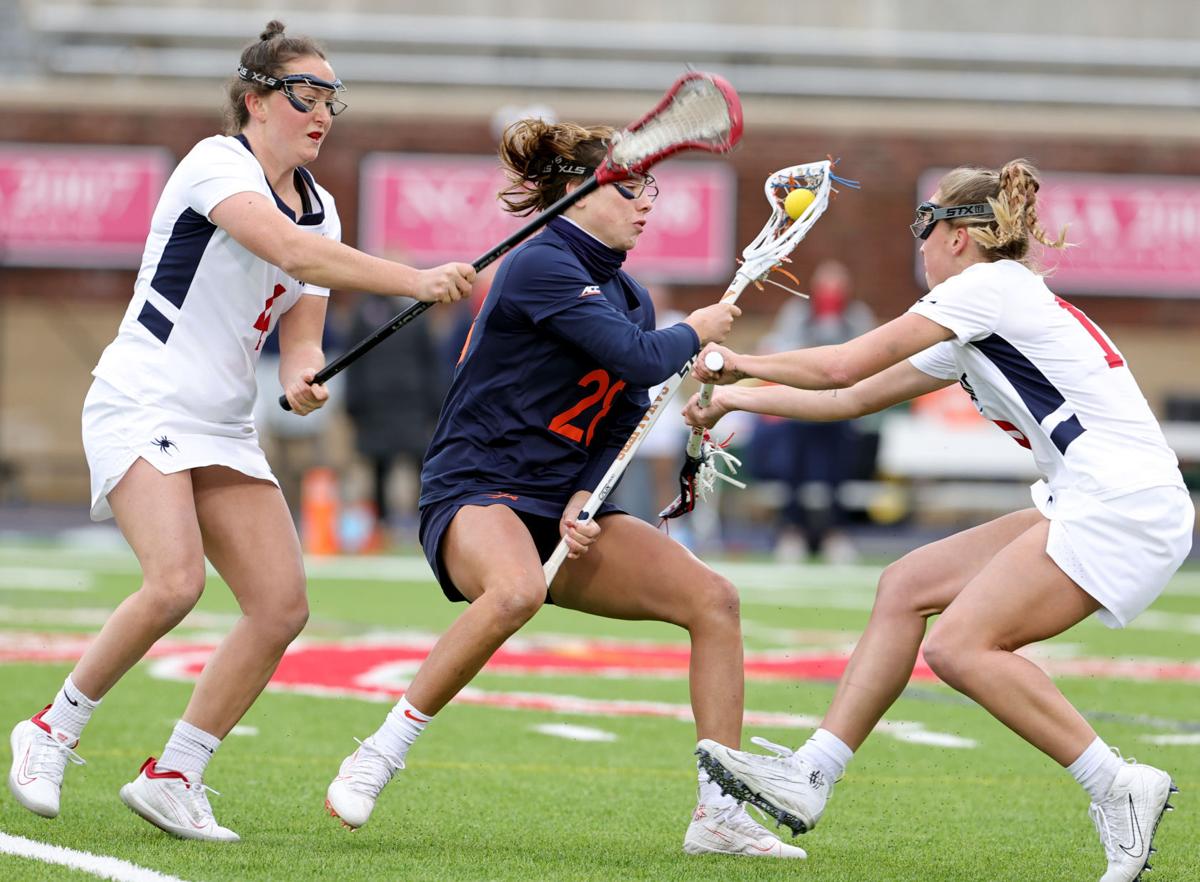 Following Friday’s 15-9 women’s lacrosse loss to No. 16 Virginia, University of Richmond senior Sam Geiersbach spoke of resiliency. The No. 14 Spiders showed some after falling behind 8-1 and 11-3 in the first half at Robins Stadium.

“It’s tough when you start a game down and they kind of get a jump on you,” said Geiersbach, an attack from West Babylon, N.Y. “But we have this never-give-up mentality, so it doesn’t matter how far down we get.”

Now, UR will try to demonstrate more of that resiliency after absorbing its first regular-season defeat since mid-April of 2019. The Spiders were 7-0 last season, including a win at UVA, before the pandemic caused college sports to shut down. Richmond began this season last Sunday with a 19-10 win over visiting Radford.

UR (1-1) was picked to win the A-10, and UVA (2-0) was projected as the fourth-place finisher in the ACC. The Cavaliers used draw superiority and six scores off free-position shots following Richmond fouls to take command in the opening half.

“We just couldn’t get the draws our way, so we didn’t have the ball enough,” said Geiersbach.

A defensive adjustment helped the Spiders settle down, according to UR coach Allison Kwolek, but the Cavaliers by that time were in control.

“Starting strong made a huge difference in the game, it energized everything we did,” said UVA coach Julie Myers. “I was very happy with our tenacity across the field and how we attacked in the first half in particular.”

Richmond, down 11-5 at the break, limited UVA to four second-half goals. “It’s just our offense really never got going,” said Kwolek. “I would say we’re a team that can catch and finish … that was rough for us tonight. We just didn’t capitalize on our offensive set the way that we needed to.”

“They had a lot of freshmen on the field that are all high-level players,” said Kwolek. “Those freshmen are able to step up and contribute right away. UVA, when they came out, they were ready to go. They definitely took advantage of our defense in that first 10 or 15 minutes.”

Virginia lost 13-12 in overtime to Richmond when the teams met last February in Charlottesville. UVA was No. 6 at the time, and that was the Spiders’ first victory over a top-10 team since 2006.

The Spiders next play at William & Mary on Feb. 27, when UVA returns to action against visiting Virginia Tech.

A shortened A-10 men’s basketball regular season, potentially by at least two games for each team, and shifting of conference tournament sites…

There are two things to watch as the University of Richmond heads into the final two games of its regular season. One, the Spiders’ schedule, …

'Tunnel vision' is how Spiders look at situation, according to Blake Francis

They completed a demanding on-the-road comeback. They took a second-half lead. But Richmond’s Spiders couldn’t hold off Saint Louis down the s…

There's more of 6-9 Spider Sal Koureissi than before, and likely more to come

Souleymane “Sal” Koureissi powered through a defender to score Saturday. This caused the loudest roar of the evening among those in the Univer…

By the time those on UMass’ bench yelled the “door” part of “Watch the backdoor!” another University of Richmond layup was being converted.

Russ Huesman acknowledges he headed into the planning process for a spring-semester football season with reservations.

UR’s Sophia DiCenso (center) battles for control with Virginia’s Kiki Shaw (left) and Aubrey Williams during their game at UR.