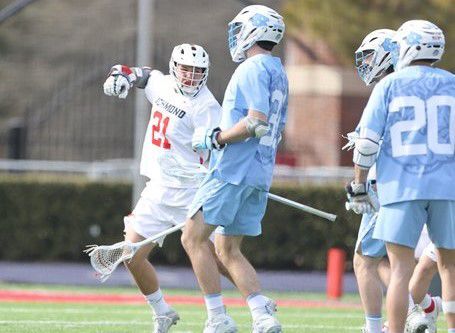 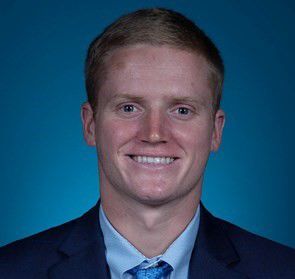 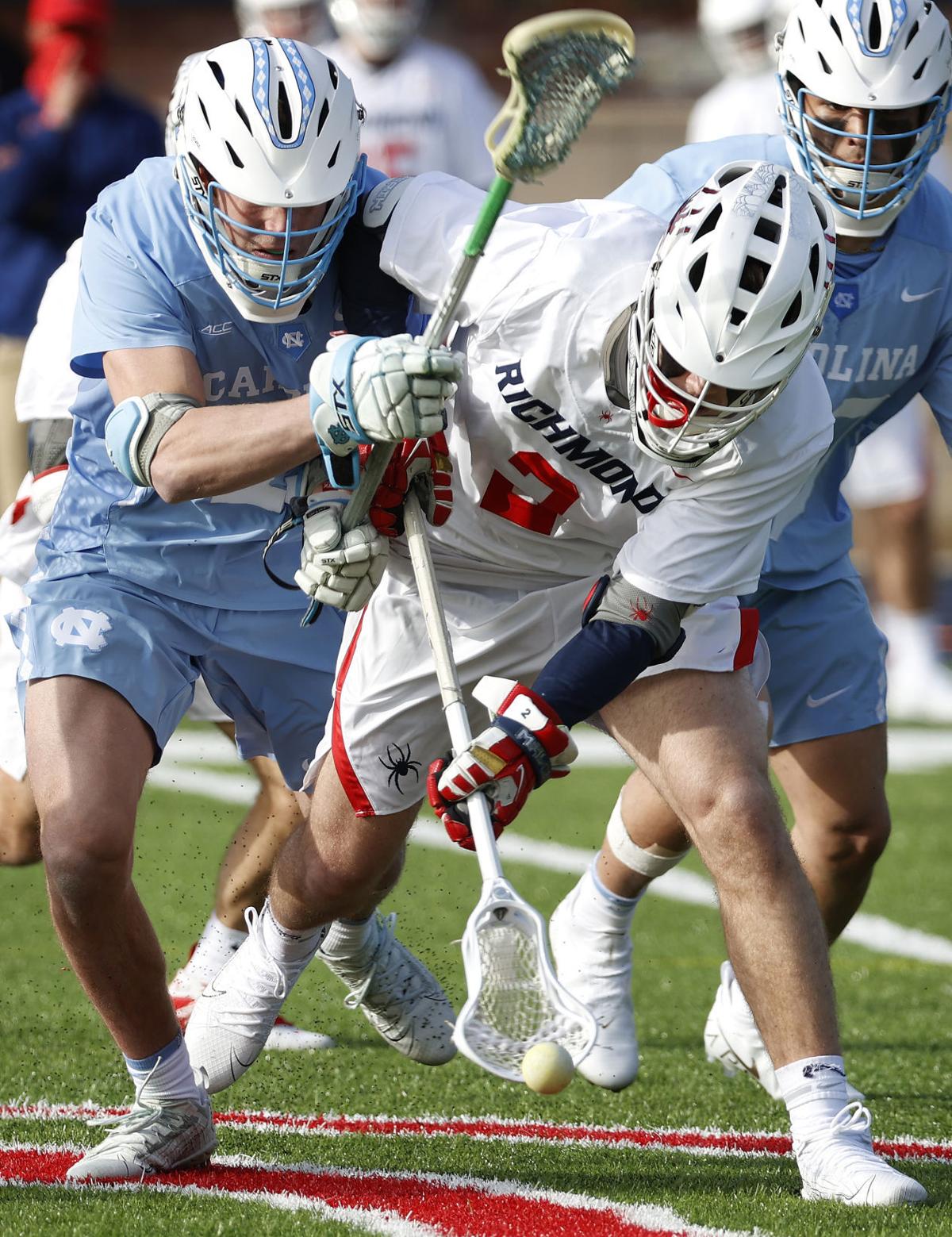 Richmond’s Brett Reid and North Carolina’s Andrew Tyeryar vie for the ball in the Spiders’ 14-9 loss at Robins Stadium on Sunday. Richmond led 3-2 in the opening 10 minutes before the Tar Heels pushed ahead.

Among North Carolina players who scored in Sunday’s 14-9 lacrosse win at the University of Richmond was Floridian Will Nicklaus, the grandson of golf legend Jack Nicklaus.

In golf parlance, the Spiders played well for the first few holes, and then couldn’t keep it together against the nation’s second-ranked team.

The Tar Heels (4-0) took control late in the first quarter and did not trail thereafter. A pair of sophomores, Richie Connell and Dalton Young, each scored three times for UR.

Richmond (0-2), ranked No. 16, played without coach Dan Chemotti, out in response to COVID-19 protocols, according to the school. The Spiders were directed by associate head coach/defensive coordinator Paul Richards. UR did not specify whether Chemotti’s absence was related to a positive test or contact tracing.

“Once the game started, the nerves were gone,” Richards said. “I tried to treat it as a normal of a day as possible. I felt like it was only going to be as big of a deal as I made it.”

UR began men’s lacrosse in 2014, and this is the first game Chemotti missed.

“He was outstanding. He just continues to be a rock for us defensively,” Richards said. “The guys have just so much confidence in him. That allows us to play with a lot of confidence defensively in front of him.”

The Spiders opened last weekend with an 8-7 overtime loss to No. 10 Loyola. Against UNC, Richmond scored three goals in the opening 10 minutes, to take a 3-2 lead. The Tar Heels responded by scoring six of the next seven goals to lead 8-4 at halftime.

Richmond cut UNC’s lead to 9-7, but the Tar Heels scored the next three goals to lead 12-7 early in the fourth quarter.

“I thought defensively, we opened the door for them a few times and gave them a couple of opportunities, and as talented as they are, you can’t give them opportunities,” Richards said. “They capitalized on their opportunities and we didn’t quite as much.”

Notes: The Spiders on Saturday afternoon meet Towson at Robins Stadium, part of Richmond’s four-game homestand to begin the year. The Tigers play Wednesday at Mount St. Mary’s … Chemotti’s status for Saturday’s game is to be determined, according to UR … No. 1 Duke visits Richmond on March 5.

The Tarheels beat the Spiders in lacrosse at Robins Stadium Sun., Feb. 21, 2021.

Richmond’s Brett Reid and North Carolina’s Andrew Tyeryar vie for the ball in the Spiders’ 14-9 loss at Robins Stadium on Sunday. Richmond led 3-2 in the opening 10 minutes before the Tar Heels pushed ahead.