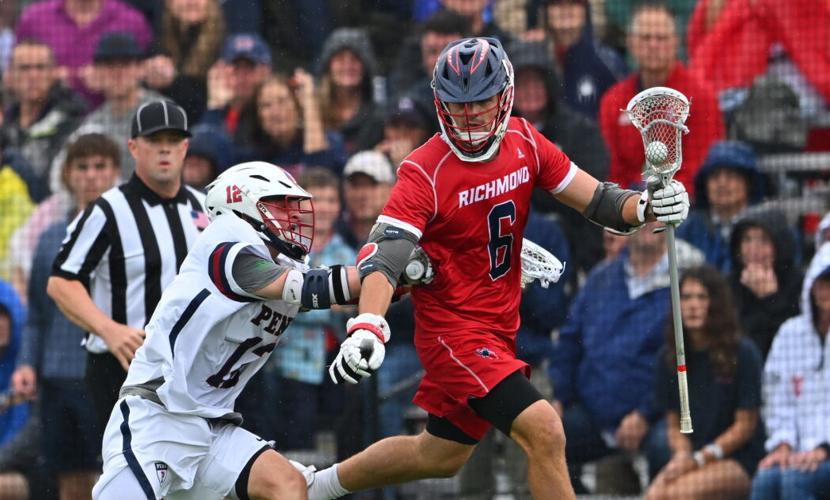 UR’s Luke Frankeny works around Penn’s Cam Rubin in Saturday’s NCAA lacrosse tournament first-round game in Philadelphia. Penn tied the game on Ben Smith’s goal with 29 seconds left in regulation, then won it 17 seconds into overtime on another goal by Smith. 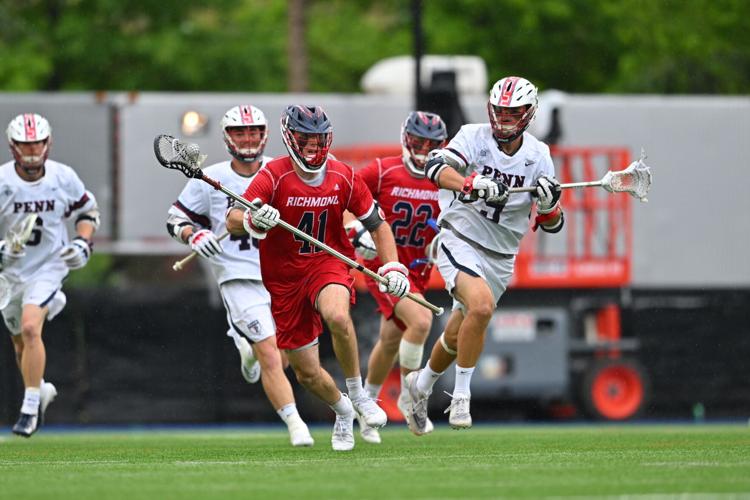 Jake Kapp advanced the ball upfield after a defensive stop by the University of Richmond at Penn Saturday in the NCAA lacrosse tournament.

PHILADELPHIA — In the rain, on the road, in the NCAA men’s lacrosse tournament, the University of Richmond led with 30 seconds remaining.

A few minutes later, UR’s red-clad players were prone all over the field, brought down by sudden-death disappointment, and Quaker Sam Handley was running near the Spiders’ fans smiling and waving.

Penn showed why it’s the third seed in the field. The Ivy League champion Quakers scored with 29 seconds left in regulation to tie it and won it 17 seconds into overtime after gaining possession on the OT faceoff and calling a timeout to set up a play.

The Southern Conference champion Spiders fell 11-10 in the first round before 2,061 at Penn Park, an alternate site on the school’s campus used because Franklin Field, the Quakers’ normal home field, was involved with graduation.

“I feel like we were pretty fortunate to come away with a win,” said Penn coach Mike Murphy. “That’s one of the best teams we’ve played all year.”

Said UR coach Dan Chemotti: “I’m being perfectly honest with you. There was never a moment during that game that I thought we were going to lose. Not one moment. So at the end … it still hasn’t quite sunk in.”

Richmond (11-5) fell to 0-4 in NCAA tournament games. Penn (11-4) moves on to the quarterfinals and will face Rutgers or Harvard, which play Sunday, next weekend at Hofstra.

Failure to maintain possession in a key moment cost Richmond. The Spiders scored a man-up goal to lead 10-9 with 3:55 left. Penn’s shot with 59 seconds remaining was saved by Zach Vigue, but while advancing the ball upfield after that save, Richmond committed a turnover caused by Penn’s Ben Bedard.

Said Chemotti: “But still, the [UR] defense was doing what they needed to do at that point. So I still was like, ‘All right, well, we’re going to get a stop.’ We’ve been getting stops and supporting each other.”

Penn’s Ben Smith scored at :29 to force overtime, and Smith hit the winner in OT for his fifth goal. Dalton Young had three goals to lead Richmond, which was forced to defend uncommon size. The Quakers came at UR downhill with the 6-foot-5, 230-pound Handley, the Ivy League player of the year, and 6-5, 220-pound Gabe Furey.

Richmond trailed 5-2 after the first period but showed composure it exhibited during a pair of wins that led to the SoCon title.

“They’ve got a lot of studs. [UR defense] started to shut them down and gave the offense an opportunity to put the ball in the net,” said Spider Ryan Lanchbury (one goal, two assists). “I don’t think it was [our] best 60 minutes, but I think we played solid, and we got good opportunities.

“We maybe at times were a little quick with our shots.”

The Penn lead was sliced to 7-6 at halftime, and UR went ahead 8-7 midway through the third period.

“I just felt like we weren’t subscribed early on to like our normal formula of success,” said Chemotti. “We were just getting beat to ground balls. ... You’ve got 18- to 22-year-olds, you’re in the NCAA tournament, you’ve got a freshman goalie in there, you’ve got a couple of freshmen scattered all over the place.

“And as much as you try to tell them, ‘Hey, this is the same game that we’ve already played 15 times. Just take a deep breath and focus on your execution,’ it’s a lot easier said than done.”

Hard rubber balls traveling in excess of 90 mph commonly pelt lacrosse goalies in their unprotected thighs, shins and calves, as well as vario…

Approaching the NCAA tournament, “I think this was a different year where we really came in here expecting to win."

Spider Dom Toso batted .310 last year. He bumped that by more than 100 points.

Transfers touch down at UR: 'I’d like to think we did well,' said coach Chris Mooney

Neal Quinn, a 7-footer who came UR from Lafayette, was impressive in the Spiders' first team workout of the offseason.

Inheritance builds in a relatively young college program, passed on from class to class.

After 17 Spiders years by Chris Mooney's side, Rob Jones moves to Liberty

"I would say he has the greatest work ethic that I’ve ever seen."

Spiders hoops roster comes into focus, and height sticks out. Here's the breakdown.

'A wild story:' Jason Roche went from West Coast, to prep school, to The Citadel, to UR

Jason Roche, one of the University of Richmond’s three incoming basketball transfers, averaged 23 points per game as a high school senior but …

UR’s Luke Frankeny works around Penn’s Cam Rubin in Saturday’s NCAA lacrosse tournament first-round game in Philadelphia. Penn tied the game on Ben Smith’s goal with 29 seconds left in regulation, then won it 17 seconds into overtime on another goal by Smith.

Jake Kapp advanced the ball upfield after a defensive stop by the University of Richmond at Penn Saturday in the NCAA lacrosse tournament.