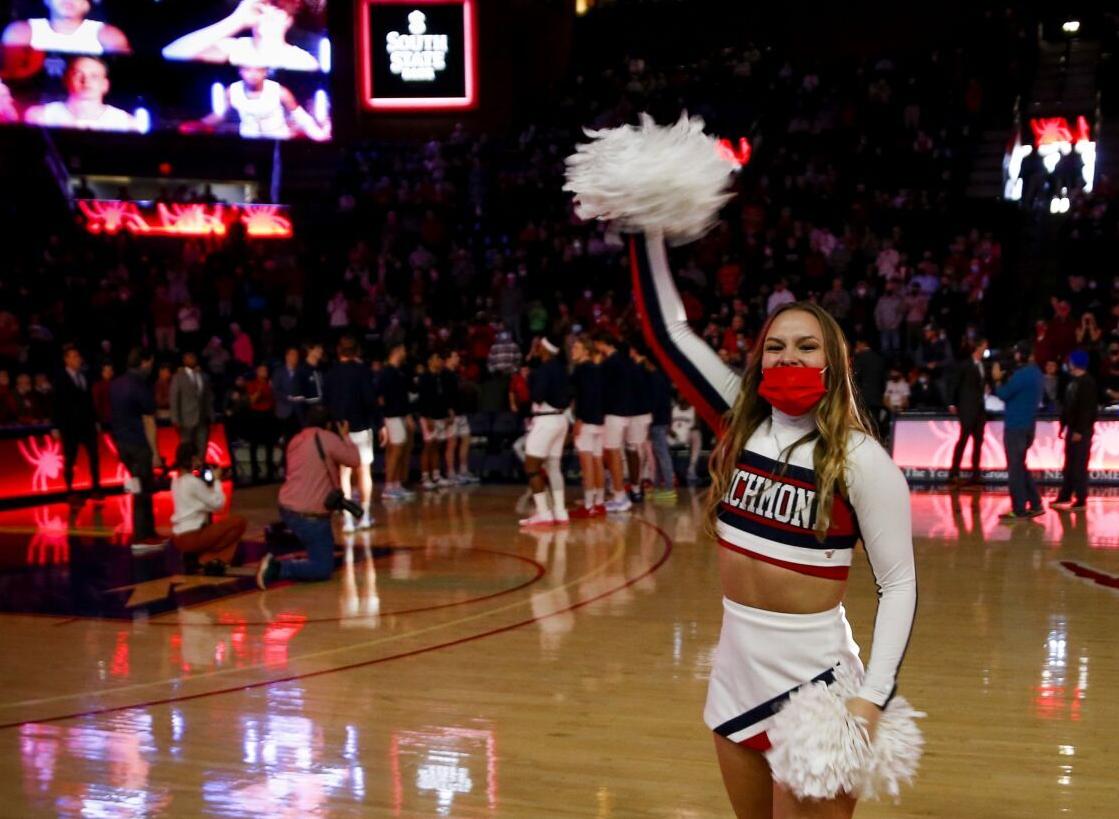 Sign of the times: a Richmond Spiders cheerleader wore a mask at the Robins Center while supporting UR’s team before the start of a December game against Old Dominion. 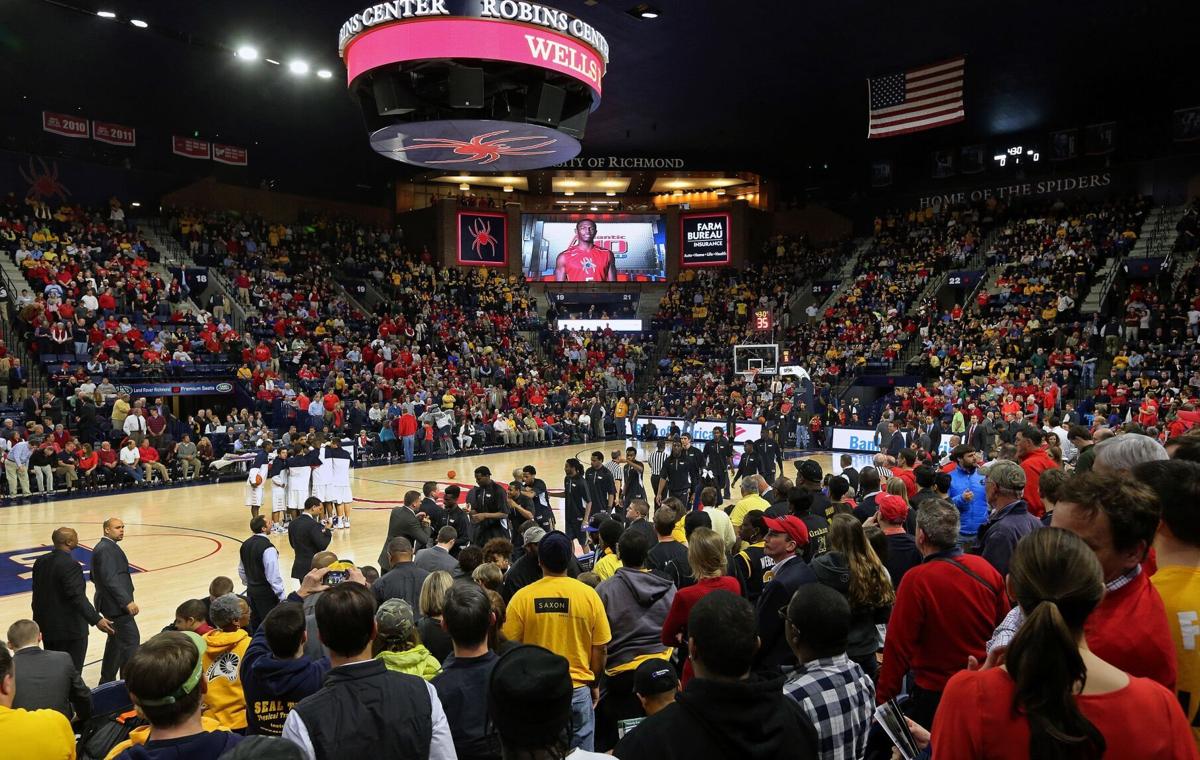 The University of Richmond’s Robins Center has a seating capacity of 7,201, and the Spiders have averaged 5,677 in eight home games so far this season.

The University of Richmond athletics Twitter feed on Monday morning sent a message: “Welcome back students! We’ll see you soon.”

UR, which resumed classes this week, attached a picture of a crowded student section in the Robins Center stands during a basketball game.

The school’s athletics website notes that the first 1,000 fans at the Spiders’ Friday night game against Davidson receive free T-shirts and promotes a pregame event featuring craft brew tasting and food sampling. UR will debut a new light show accompanying the announcement of the Spiders starting lineup.

Schools throughout the country deal with a balancing act during another winter wave of the pandemic, trying to generate energetic support in crowded basketball arenas while responsibly supervising venues when virus spread is common, and potentially dangerous.

Richmond’s 9 p.m. meeting with Davidson is an Atlantic 10 Conference national showcase, this one on ESPNU, amplifying UR’s desire for a lively Robins Center atmosphere featuring an involved student section and few empty seats.

“The University of Richmond continues to do everything it can to provide our students the high-quality, exciting, and distinctive educational experience they expect while also maintaining the health and well-being of our campus. Certainly this includes our athletic programs,” the school wrote Monday in a response to questions from The Times-Dispatch. “As for Friday night’s contest, we expect an enthusiastic crowd, but we will continue to enforce game-day COVID-19 polices and the mask-wearing requirement for all fans.

“We are continuing our public-address messaging and visual signage to reinforce our mask-wearing requirement during games and will continue to do so through this difficult time to protect the health and well-being of the Spider community.”

Other area universities chose another direction. On Jan. 3, Virginia Union University announced that there would be no fans allowed at men’s and women’s basketball games at the school’s Barco-Stevens Hall until further notice. On Jan. 7, Virginia State University announced, “For the health and safety of our student athletes and our Trojan Community, VSU will not allow any spectators to be present during at-home basketball games for the next two weeks through January 22, 2022.”

An increasing number of colleges have begun requiring fans to show vaccination cards, or proof of a negative COVID-19 test from a lab within 24 hours of entry, before they’re admitted to basketball games.

“This was less the case last year, that there were somewhat different protocols in different areas of the country that affected basketball, college basketball,” Spiders coach Chris Mooney said. “But it appears this year it’s a little bit more what your particular county says, or school, or city says.”

UR released its COVID protocols for the Robins Center before this season began in early November. All fans are required to wear masks, except when drinking or eating. Proof of vaccination is not required. The school requests that fans stay home if they have COVID symptoms.

The Robins Center, in its 50th season, seats 7,201. In eight home games this season, the Spiders’ average attendance has been 5,677. Students were not on campus during the past few home games (holiday break). Apart from the mostly vacant student section behind the basket on the arena’s west side during recent games, there have been empty patches in the stands that are ordinarily occupied. That could be related to the pandemic and fans’ hesitation to join large crowds.

“In light of COVID, we are seeing smaller crowds across the A-10 and at arenas in the rest of the country. However, we do not have any specific data at this time that suggests our fans are more reluctant to come to games than they are at other colleges and universities,” UR wrote.

Davidson is the highest-rated A-10 team in the NCAA NET rankings, at No. 38, heading into its Tuesday home game against Massachusetts. If the Spiders defeat Davidson (12-2, 2-0 A-10), no court-storming will follow.

Among the Robins Center COVID guidelines: “Court access is not permitted at any time or under any circumstance.”

UR visits Fordham Tuesday in makeup, coach optimistic UR can get in all 18 A-10 games

Game was originally scheduled for last Saturday, but postponed due to COVID issues at Fordham.

Sign of the times: a Richmond Spiders cheerleader wore a mask at the Robins Center while supporting UR’s team before the start of a December game against Old Dominion.

The University of Richmond’s Robins Center has a seating capacity of 7,201, and the Spiders have averaged 5,677 in eight home games so far this season.