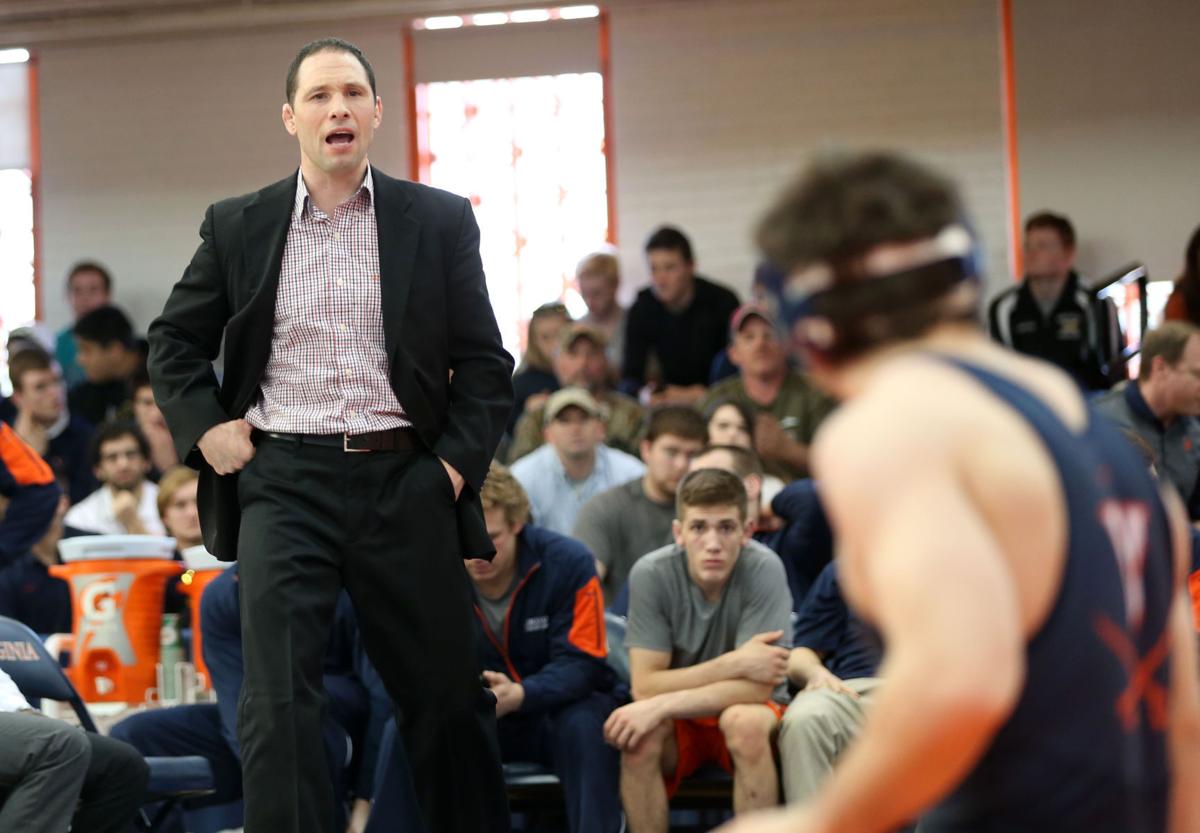 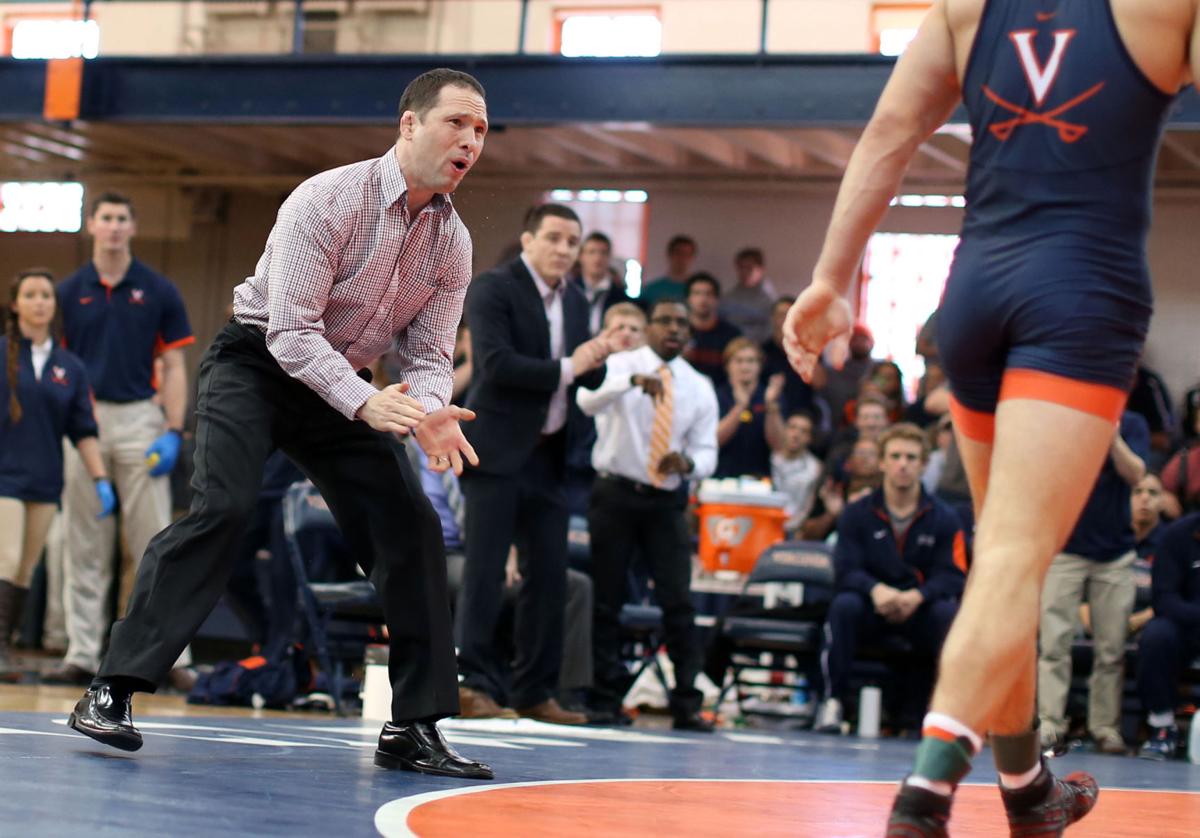 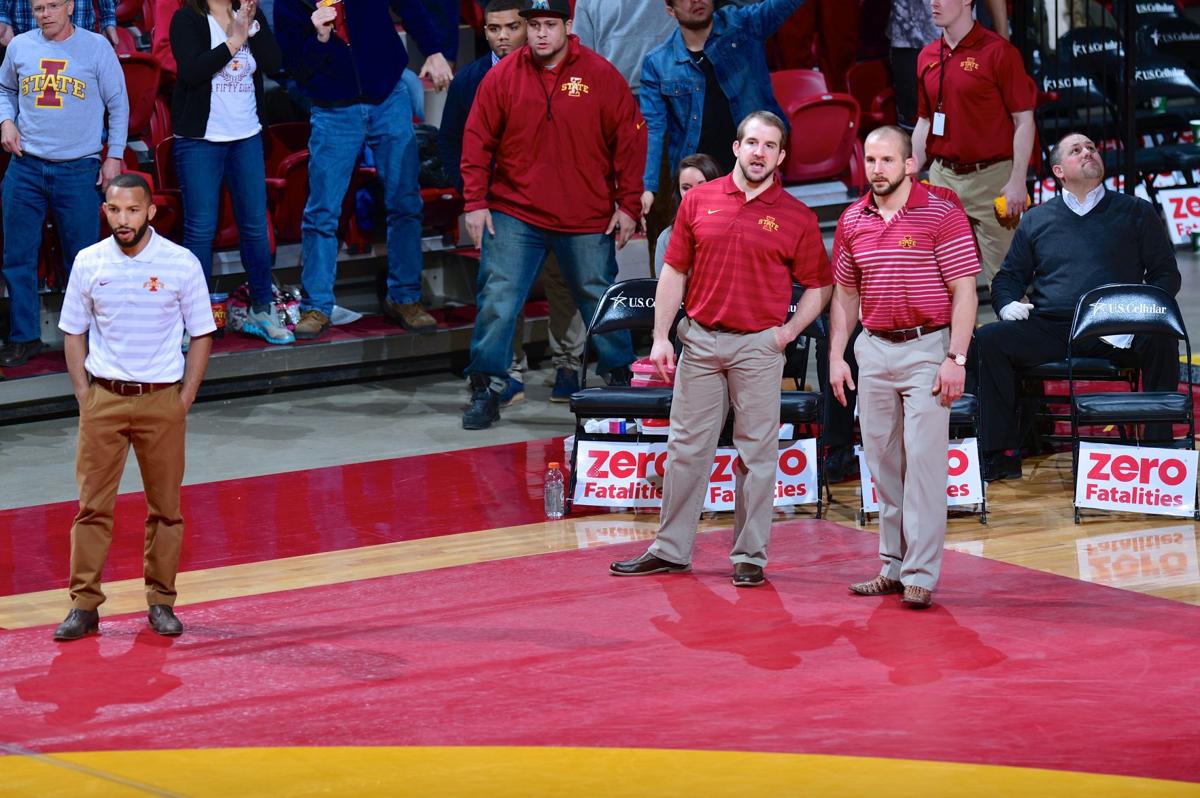 CHARLOTTESVILLE Sitting in a St. Louis hotel ballroom in front of plates of breakfast food, Trent and Travis Paulson listened to a man share his story.

He shared it all, not just the highlights. He talked about growing up in poverty and about battling demons that nearly cost him his marriage and his career.

And he talked about his brother — his twin brother — and the struggles in his life.

Trent and Travis Paulson, themselves twins, listened to this man share his story, and they were drawn in.

“After hearing him speak at that event, I knew right away,” Travis Paulson said. “It’s cool how open he is. He’s sharing his story, his deepest stuff, and it’s all to help others.”

When Virginia wrestling coach Steve Garland gave his keynote address at the breakfast, hosted in March by the Fellowship of Christian Athletes, he wasn’t recruiting new assistants. At the time, he had a full staff. He was hours away from coaching a pair of Cavaliers in the national semifinals.

But Garland believes, deeply and passionately, that his story can help others, so he’s willing to share it — the unpolished, unabridged version — whenever he can.

That story began as he was growing up poor in Middletown, N.Y., raised by a single mother working multiple jobs to support Steve and his twin brother, Dan, and their younger sister.

“We were always in the same room, and then cramped in the same bed,” Dan Garland said. “We were pretty much attached at the hip for most of our younger years. That’s the thing with being a twin. You always have a best friend.”

Fans of WWE pro wrestling as kids, the Garlands didn’t get into the real sport until the seventh grade. Often told they were too small for more mainstream sports, the duo immediately took to wrestling, excelling in sub-100-pound weight classes.

They headed to Central Connecticut State to wrestle together in 1995, but after one year, the school cut the program.

Steve Garland, who had excelled more in the classroom, transferred to Virginia, where he would become an ACC champion and a national runner-up.

Dan Garland went to SUNY Cortland, where he was injured and then saw his life spiral out of control. He left school after his sophomore year, then spent seven years in prison for selling drugs, he said.

“I kind of got off the path, fell in with the wrong crowd,” Dan Garland said. “I wish I would have been with my brother, because he always kind of kept me a little more grounded.”

While his brother lived in a cell, Steve Garland was building a successful coaching career, spending six seasons as an assistant coach at Cornell before getting the job at U.Va. in 2006.

His brother was getting out of prison and rebuilding his life, but Steve Garland was hitting his rough patch. In the eyes of his brother and mother, he was a success, the coach at his alma mater. But he saw something else.

“My brother puts an extreme amount of pressure on himself,” Dan Garland said. “He’s so focused on winning. I think it was reflecting into his personal life, outside of wrestling. To coach at his alma mater, we thought, was an honor. To him, it was just the beginning.”

The Cavaliers struggled on and off the mat, losing matches and having disciplinary issues. Garland had to coach, recruit, fundraise and — by his own admission — he wasn’t handling it well.

Like his brother, Steve Garland had become consumed with what he thought he wanted. If Dan Garland turned to selling drugs in his quest for success defined by money, Steve Garland lost himself in a quest for wrestling victories.

“I wasn’t better than him,” Steve Garland said. “I was just as lost as he was. I just tried a different route to try to make myself feel better.”

Steve Garland had no doubt about where he was headed.

Instead, he found religion and a new approach to his life and his career. Steve Garland found peace, and that — he said — lifted all the pressure off him. Since then, he’s won a pair of ACC championships and led the Cavaliers to top 25 finishes in six of the past eight years.

Wrestling in front of thousands of hometown fans, the Paulson twins faced the match they had always hoped to avoid. Trent vs. Travis. Brother vs. brother to advance at the World Team Trials as they vied for a spot on the national team.

That was 2010 at the Mid-American Center in the twins’ hometown of Council Bluffs, Iowa.

“You could hear a pin drop when we were wrestling,” Trent Paulson said. “Nobody’s cheering. Nobody knows what to do. It was awkward as hell.”

Travis claimed the win that day, advancing to the finals in the only competitive matchup between the pair. Trent, however, claimed an earlier victory, being born about 20 minutes ahead of his “little brother.”

Trent and Travis Paulson started wrestling when they were in first grade. They’ve been together in the sport nearly ever since.

For the past three years, the twins worked as assistant coaches at their alma mater, Iowa State. But when Cyclones coach Kevin Jackson resigned after last season, the Paulsons feared they might have to go their separate ways.

“We both felt like, when there was the transition at Iowa State, that we’d both be fine,” Travis Paulson said. “But we didn’t know if we’d be able to stick together.”

Travis took a position at Virginia at the beginning of May. Trent lined up a gig at Wisconsin.

“It just doesn’t happen,” Trent Paulson said. “Two openings and the same school in the same summer? No.”

But then U.Va. had a second assistant leave the program.

“I knew the next guy I was calling was Trent, because he wanted to be with his brother anyway,” Steve Garland said.

For the Paulsons, it wasn’t just the chance to work together that made the Cavaliers’ program a perfect landing spot.

Garland’s raw, emotional story of a life and career that were heading in a downward spiral before he found religion touched the Paulsons. The fact that Garland is a twin made his speech hit home.

Since hearing Garland speak, they viewed him as an ideal boss.

“Coach Garland gave one of his powerful speeches on his story and where he’s come from,” said Trent Paulson, hired by U.Va. on May 31. “We thought that was really motivational and inspiring. We both looked at each other and said that would be a great guy to work for.”

Little did they know, two months later, they’d be his assistants.