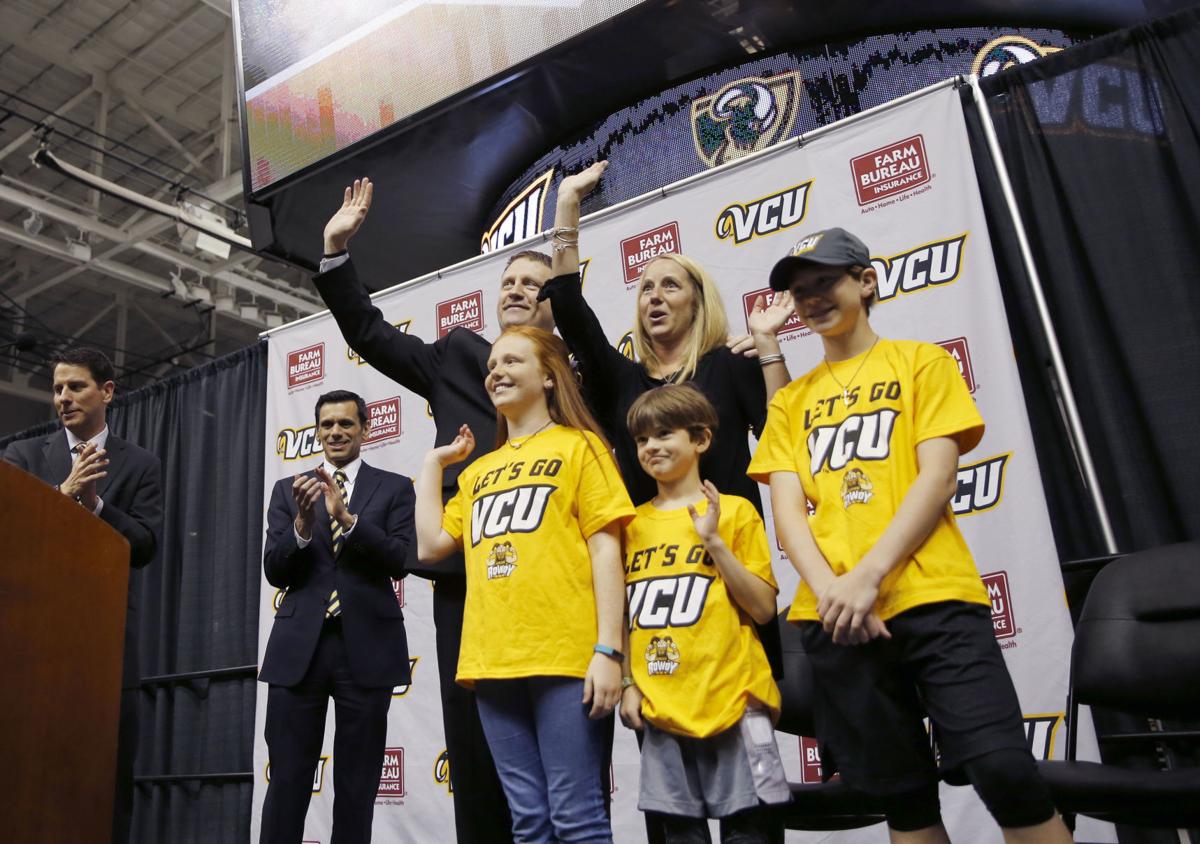 VCU coach Mike Rhoades strives to balance his career with his family. He enjoys attending his kids’ sports games. Rhoades and his wife, Jodie, have three children: daughter, Porter, and sons Chase (middle) and Logan. 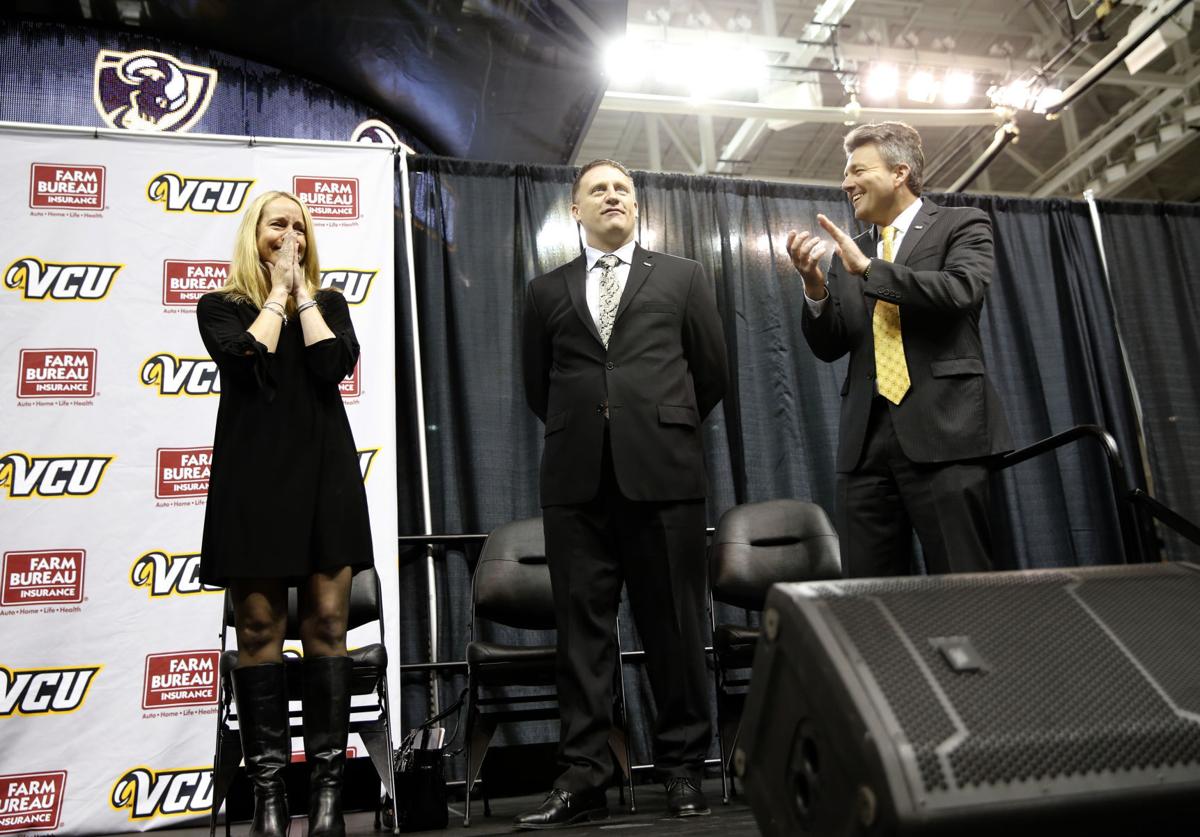 Mike Rhoades (center) is introduced as VCU’s newest basketball coach in a press conference Wednesday at the Siegel Center, as his wife, Jodie, and VCU athletics director Ed McLaughlin look on. 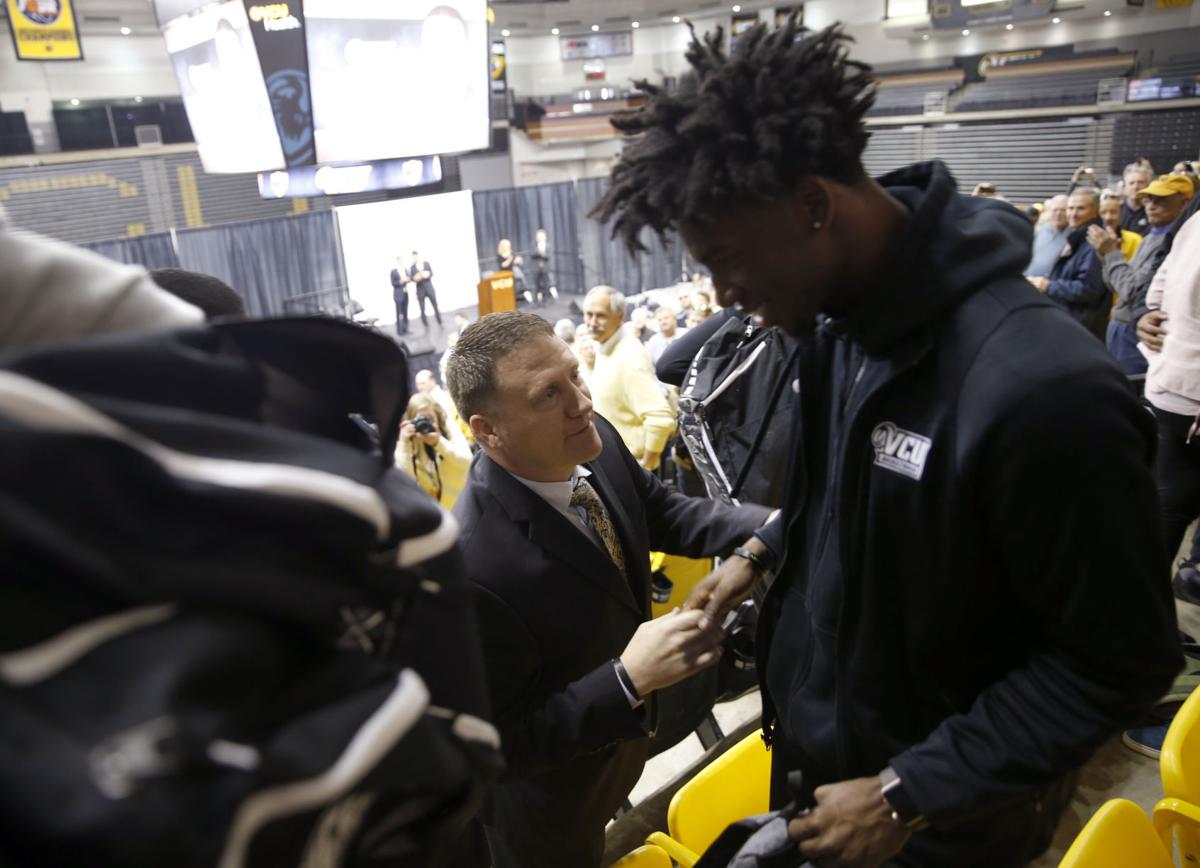 Mike Rhoades greets VCU sophomore forward Issac Vann at his news conference at the Siegel Center. Rhoades was a VCU assistant under Shaka Smart from 2009-14.

About 2½ minutes into his address to a large, spirited crowd at the Siegel Center on Wednesday, new VCU basketball coach Mike Rhoades hit the equivalent of a game-winning 3-pointer with the fans.

“We’ve been on a ride for a long time, and this ride stops here, Mom, at VCU,” Rhoades said, bringing the crowd to its feet.

Rhoades is the Rams’ third coach in four seasons, and the fan base has been frustrated by the springboard the post has become to other coaching jobs. Will Wade resigned on Monday after consecutive trips to NCAA tournament to become the coach at LSU.

Finding someone who can offer a background of success and stability for a program that has won at least 24 games in 11 consecutive seasons and has been to seven consecutive NCAA tournaments was paramount for Rams athletics director Ed McLaughlin.

“You look at any program that has a huge amount of success on the college level, whether it’s Gonzaga basketball or Alabama football, continuity is important,” said McLaughlin. “Continuity to do things at a really high level is critically important. Mike made it clear from the first two or three minutes we talked this is the place he wants to be forever.”

McLaughlin said financial terms of the contract were being finalized. The length is expected to be for six years, according to a source.

Rhoades called VCU his “dream job.” The 44-year-old native of Mahanoy City, Pa., has been a popular and respected coach in town. He made Richmond his home for 18 years as an assistant and coach at Division III Randolph-Macon (1996-2009) and an assistant at VCU under Shaka Smart (2009-14) before becoming the coach at Rice the past three seasons.

Rhoades was 197-76 in 10 seasons at R-MC and took the Yellow Jackets to the NCAA tournament four times and the Sweet 16 in 2002 and ’03. VCU was 137-46 and went to the Final Four during his tenure as an assistant. He gave life to a moribund program at Rice that has won 24 games once in program history. After going 12-20 in each of his first two seasons, the Owls were 23-12 this season.

“This is home,” said Rhoades. “I love it here. My family loves it here. When we got off the plane (Tuesday) night, we had 20-some friends (waiting) who are now our family when we moved down here. That’s why this was so exciting. Everybody knows my affection for VCU and VCU basketball.

“Our roots are already here. We just came back to connect with them.”

Rhoades’ wife, Jodie, got a little bit emotional onstage at the extended reception from the crowd. Their three children were with them, as well as Rhoades’ mother and sister.

“When I came down to Randolph-Macon, I came down in an ’87 red Ford Tempo with like 295,000 miles on it and no AC,” he said. “I pulled in and (legendary coach Hal Nunnally) and I … that was it. I’ve been here ever since (except for the three years at Rice). We got married here; our kids were born here. We just have so many friends throughout. This is an easy one.

“People who knew me knew I’d love to be the head coach. But it had to be right, too. Ed and I discussed a lot of things, but he knew my affection for this place.”

Rhoades said he wants to play fast and aggressive on offense and use pressure on defense. He emphasized several times that the program was about the players, not him. After he finished speaking at the introductory conference, he went into the stands to greet players who were in attendance.

“He’s a family guy,” said Jonathan Williams, a rising senior point guard who was recruited by Rhoades. “Energizer bunny. I think he’s a great person, not just a coach. He was speaking to me every day as a high school player. … He spent a lot of time with me from a nonbasketball perspective. I always had that in my mind that he really cared for me, not just basketball. … He treated me like a family member.”

Most of the team members don’t know Rhoades. With VCU looking at rebuilding the roster, his first priorities are retaining VCU’s current players, re-recruiting a four-man class that is ranked 21st nationally and settling on his coaching staff.

Williams said he thinks team members are going to be open to Rhoades and “take time to get to know him.”

Rhoades said he has reached out to recruits.

“If anyone can (keep the recruits), Mike can do it,” said McLaughlin.

Rhoades said he was waiting to see what happens at Rice before assembling his coaching staff. Joey Rodriguez, the point guard on the Final Four team in 2011 and the video coordinator at Rice, is returning as part of the staff in an undetermined position. He was with Rhoades at the Siegel Center.

Note: McLaughlin said forward Ahmed Hamdy received an extra year of eligibility from the NCAA. Hamdy, a senior this season, originally signed with Houston. He was ruled ineligible by the NCAA as a freshman because he played two seasons at Trent Internationale School in Sugar Land, Texas, after graduating from high school in Egypt. He transferred to VCU as a junior and filed a waiver for an extra season.

VCU coach Mike Rhoades strives to balance his career with his family. He enjoys attending his kids’ sports games. Rhoades and his wife, Jodie, have three children: daughter, Porter, and sons Chase (middle) and Logan.

Mike Rhoades (center) is introduced as VCU’s newest basketball coach in a press conference Wednesday at the Siegel Center, as his wife, Jodie, and VCU athletics director Ed McLaughlin look on.

Mike Rhoades greets VCU sophomore forward Issac Vann at his news conference at the Siegel Center. Rhoades was a VCU assistant under Shaka Smart from 2009-14.