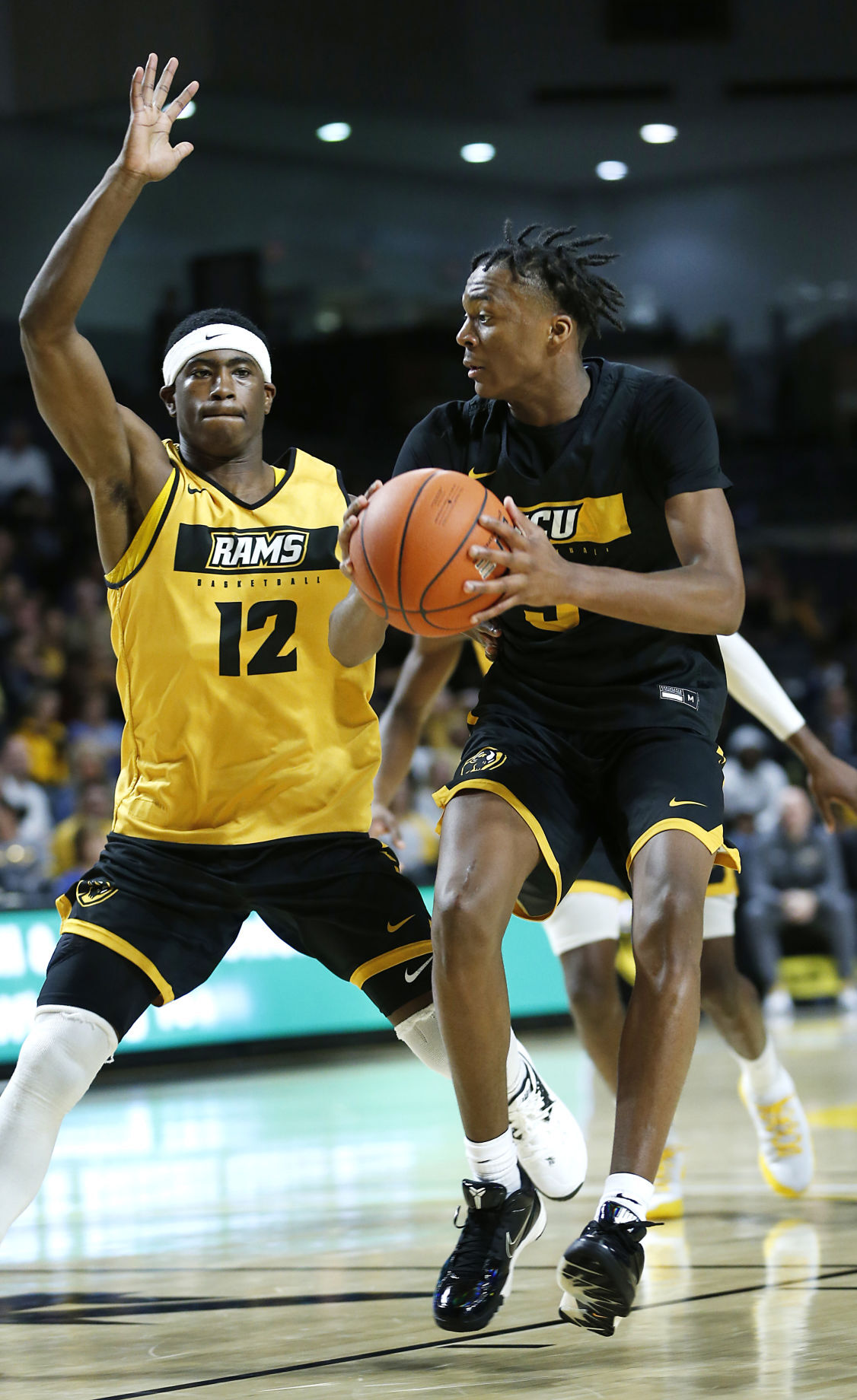 Sophomores Tre Clark (left) and Nah’Shon “Bones” Hyland, as well as freshman Ace Baldwin, will have featured roles in VCU’s guard rotation after some graduations. 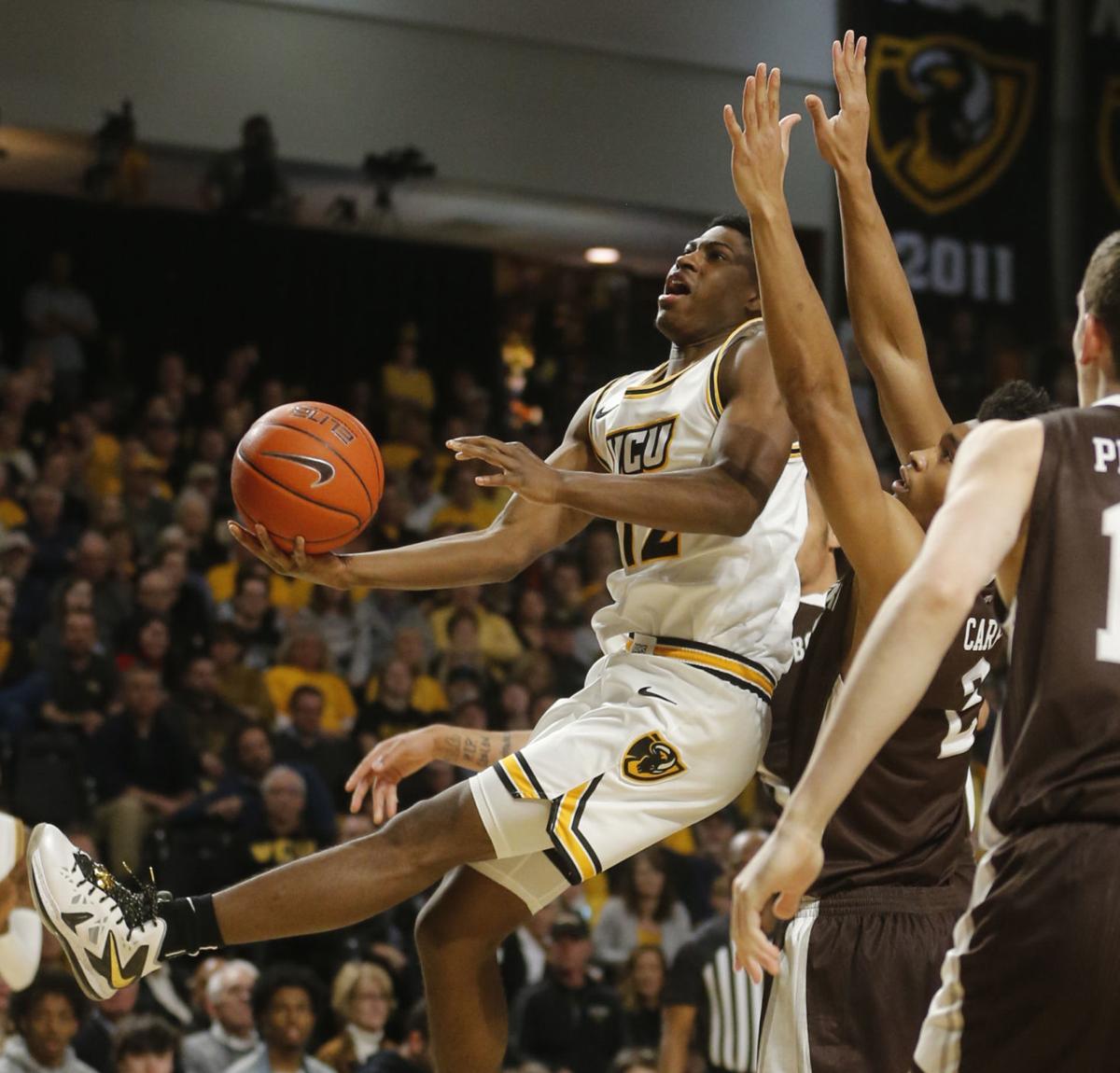 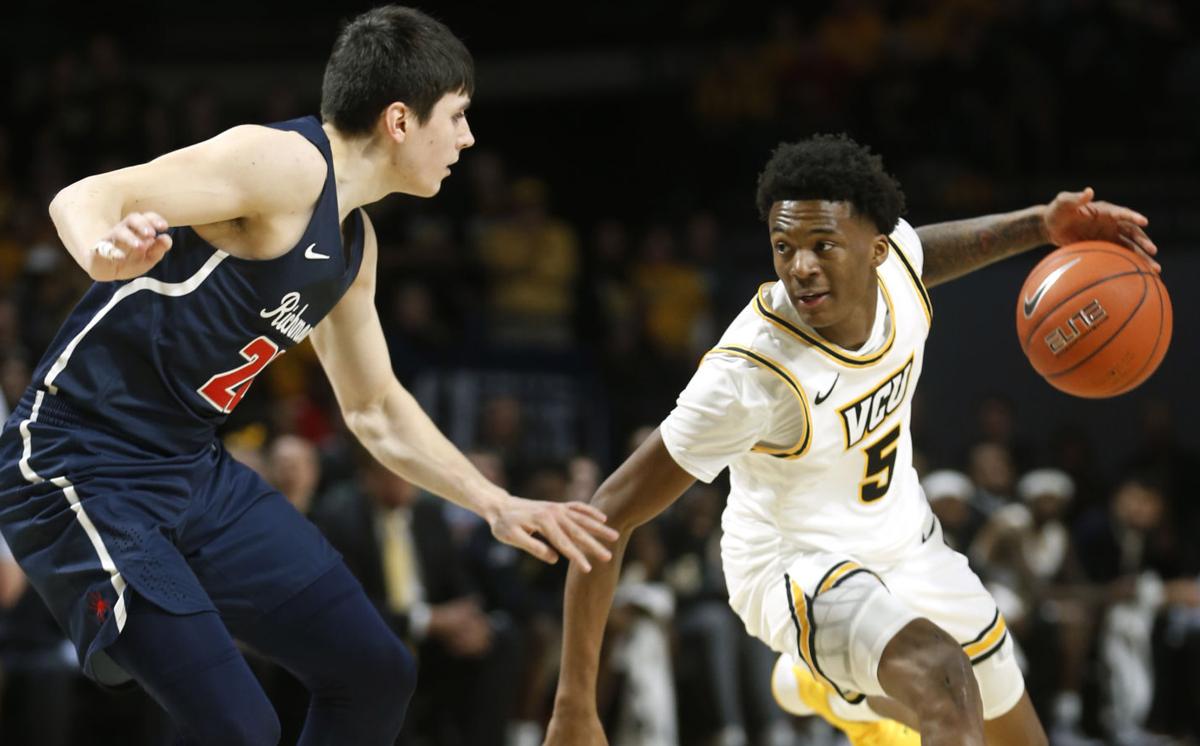 VCU’s Bones Hyland worked against the University of Richmond’s Andre Gustavson at the Siegel Center in January. 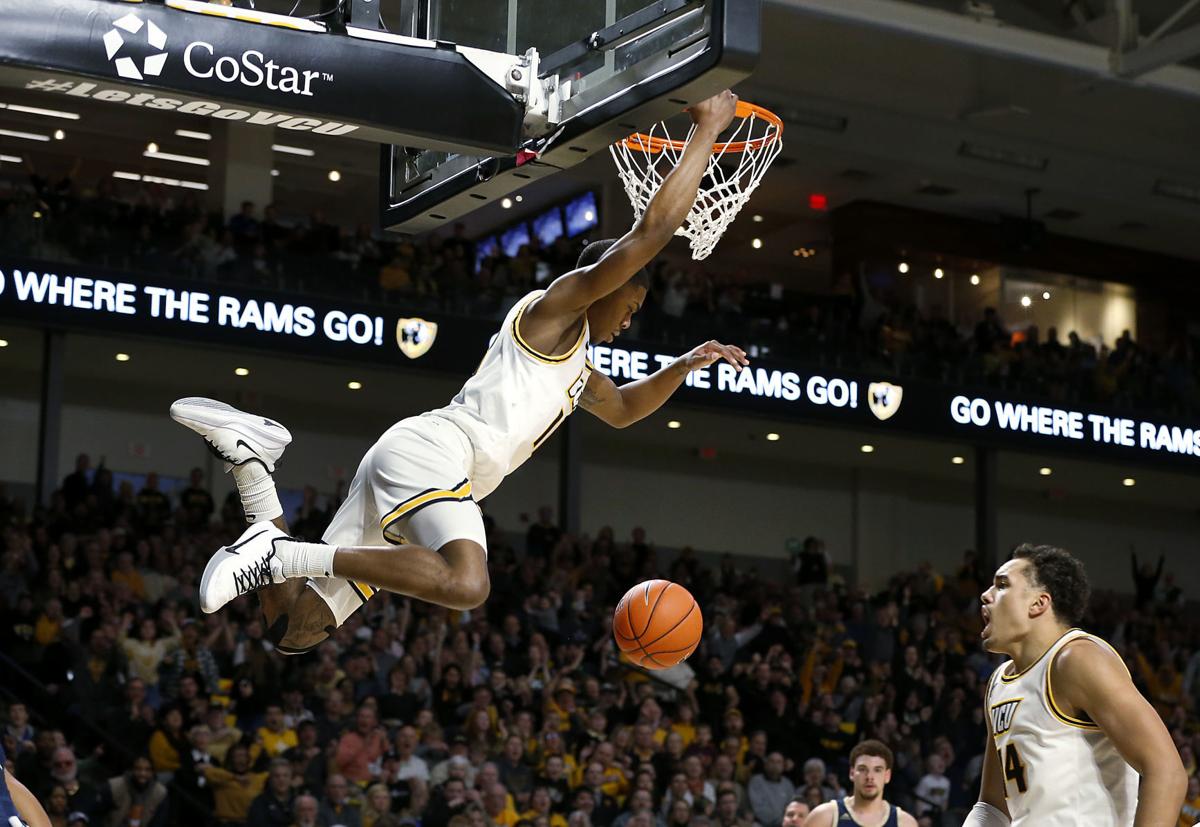 VCU’s KeShawn Curry holds on to the rim after one of his first-half dunks against George Washington at the Siegel Center. 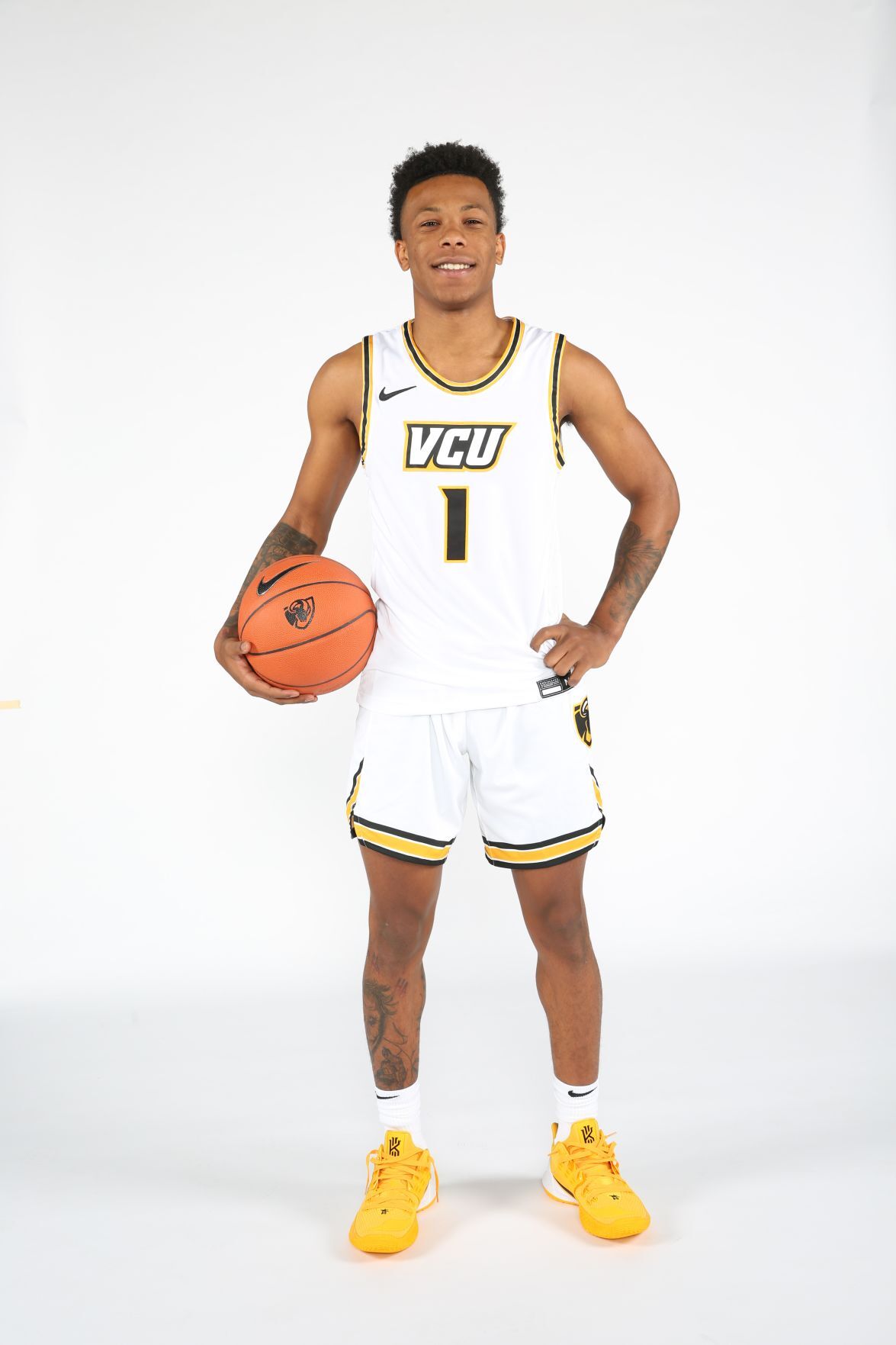 If there’s one word to describe what VCU’s backcourt is shaping up to be like this season, “flexible” would seem to be it.

Added to the mix was freshman point guard Ace Baldwin, to go along with returning point guards Bones Hyland and Tre Clark, both sophomores.

The ball-handling ability of the trio is something the Rams plan to take advantage of. Instead of one traditional point guard on the floor, with a traditional shooting guard, they’ll roll out two of their point guards at a time, with the capability to mix and match.

“We can play Tre and Ace together, and Tre and Bones together. Ace and Bones ... All three of those guys can shoot. It doesn’t always have to just be in one person’s hands,” coach Mike Rhoades said. “If people try to pressure us, we have multiple handlers out there. And at times that hurt us in the past.”

The configuration could turn out to be particularly fruitful for Hyland. He figures to take on a much heftier scoring responsibility this season, with each of VCU’s top three scorers from last season gone.

It’s a role he seems to have the acumen for, based on his performance in Atlantic 10 play last season — particularly his ability to ignite from beyond the 3-point line. Hyland shot 46.5% on 3-pointers in conference play. He hit his single-game season high of 5 3s four different times, and finished with 63 total, the most on VCU’s roster by 24 (Jenkins, 39).

The 6-4 Hyland will both be on the ball as the traditional point guard and off the ball like a shooting guard this season. But the off-the-ball role is one that he feels can open up his game a lot. It could allow his shooting prowess to shine even more.

“When you have a player that can dribble, shoot and pass at a high level, but you have some other guys that can do that and help him with that, that makes [it] harder to guard him. And the defense has to do different things,” Rhoades said. “Because Bones isn’t always on the ball, he’s off the ball, too. Now he can do a couple different things away from the ball. I just think it adds to our complexity, which I think will help us as we move along in the year and mature.”

Clark, though he didn’t get close to the level of playing time Hyland got last season, received more down the stretch last season. He averaged 12.3 minutes in VCU’s final seven games compared to 7.2 overall. And he showed that he’s a strong ball handler and a valuable defender.

And Baldwin is a player his high school coach at St. Frances Academy in Baltimore, Nick Myles, said is a throwback type of point guard who looks to get teammates involved. He averaged 8 assists as a St. Francis senior.

Also in the backcourt mix will be 6-4, 184-pound junior KeShawn Curry. He’ll slot in at both the traditional shooting guard and traditional small forward spots. Rhoades said there will be times when the Rams will roll out two ball handlers, like Clark and Hyland, Baldwin and Clark or Baldwin and Hyland, and other times when Curry will be on the floor with one of those guys. Then they can go bigger at the small forward spot, with Vince Williams (6-6, 210), Jamir Watkins (6-7, 210) or Jarren McAllister (6-4, 200).

“We definitely have options that way for sure. He’s having a really good preseason, KeShawn is,” Rhoades said. “And we expect him to step up as an upperclassman now.”

Curry has a knack for finishing at the basket, but Rhoades said he’s worked on his shot and that this offseason is the best he’s seen him shoot. Curry is 7 of 37 overall from deep thus far in his career.

The VCU guard corps is young overall, but the team will have a cornucopia of combinations to use.

Hyland is excited about the pieces the Rams have.

“I definitely see the improvement and the growth in the team,” he said. “And ... everybody’s bond is real tight. So, that can make your team go from a good team to a great team.”

Note: VCU is still finalizing its nonconference schedule, but a few dates are now confirmed. The Rams will play in a multi-team event in Orlando, Fla., to start the season, with its first game Nov. 26 and subsequent games Nov. 27 and Nov. 29. The full, four-team field isn’t official, but CBS Sports’ Jon Rothstein reported that Tennessee, Penn State and Charlotte are also in the mix. Also, the second leg of the Rams’ home-and-home series with LSU, in Baton Rouge, La., is now set for Dec. 22.

Sophomores Tre Clark (left) and Nah’Shon “Bones” Hyland, as well as freshman Ace Baldwin, will have featured roles in VCU’s guard rotation after some graduations.

VCU’s Bones Hyland worked against the University of Richmond’s Andre Gustavson at the Siegel Center in January.

VCU’s KeShawn Curry holds on to the rim after one of his first-half dunks against George Washington at the Siegel Center.