Twenty years after working together at Randolph-Macon, Mike Rhoades and Nathan Davis will face each other Saturday
0 Comments
Share this
1 of 7 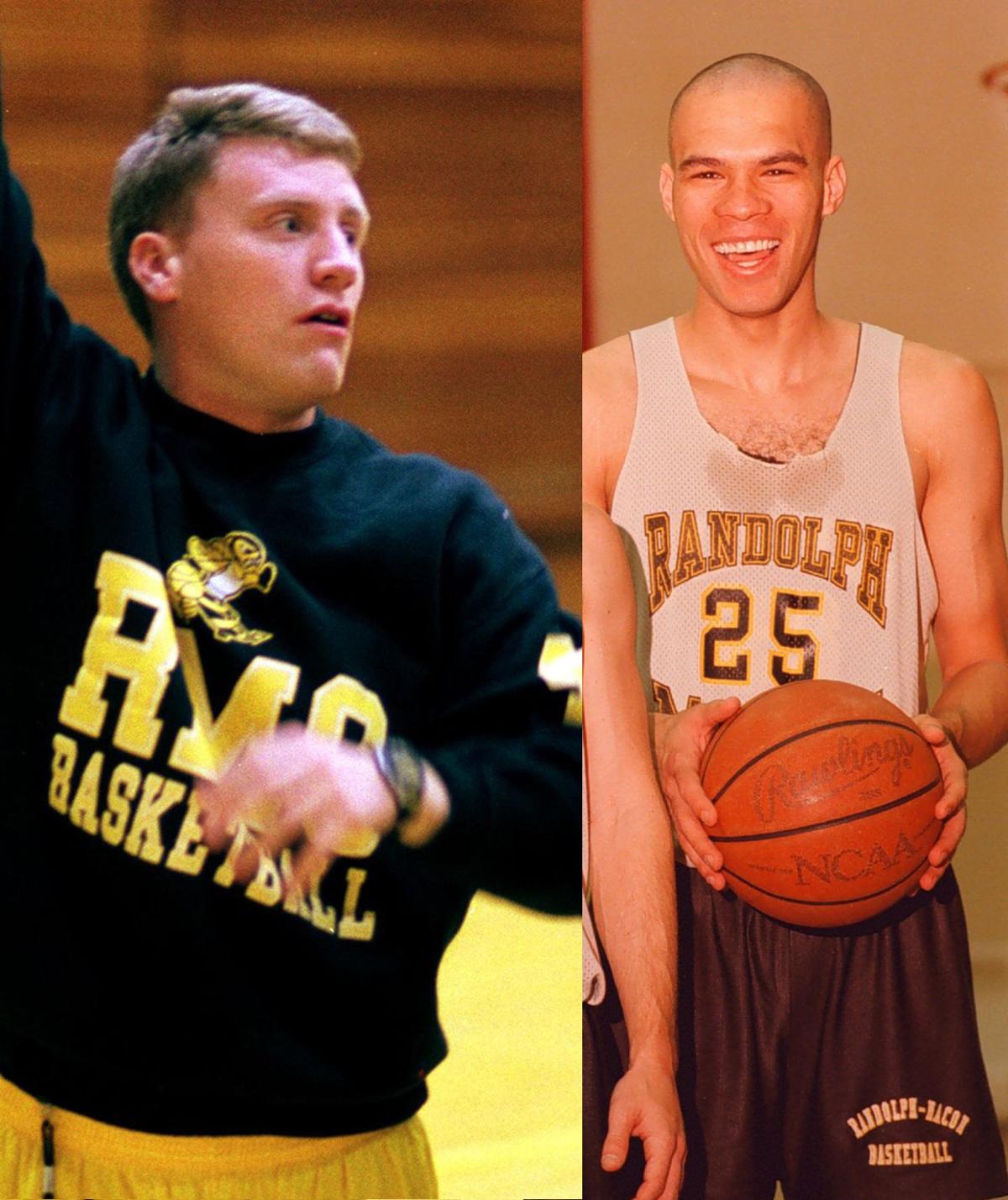 Mike Rhoades and Nathan Davis in their Randolph-Macon years 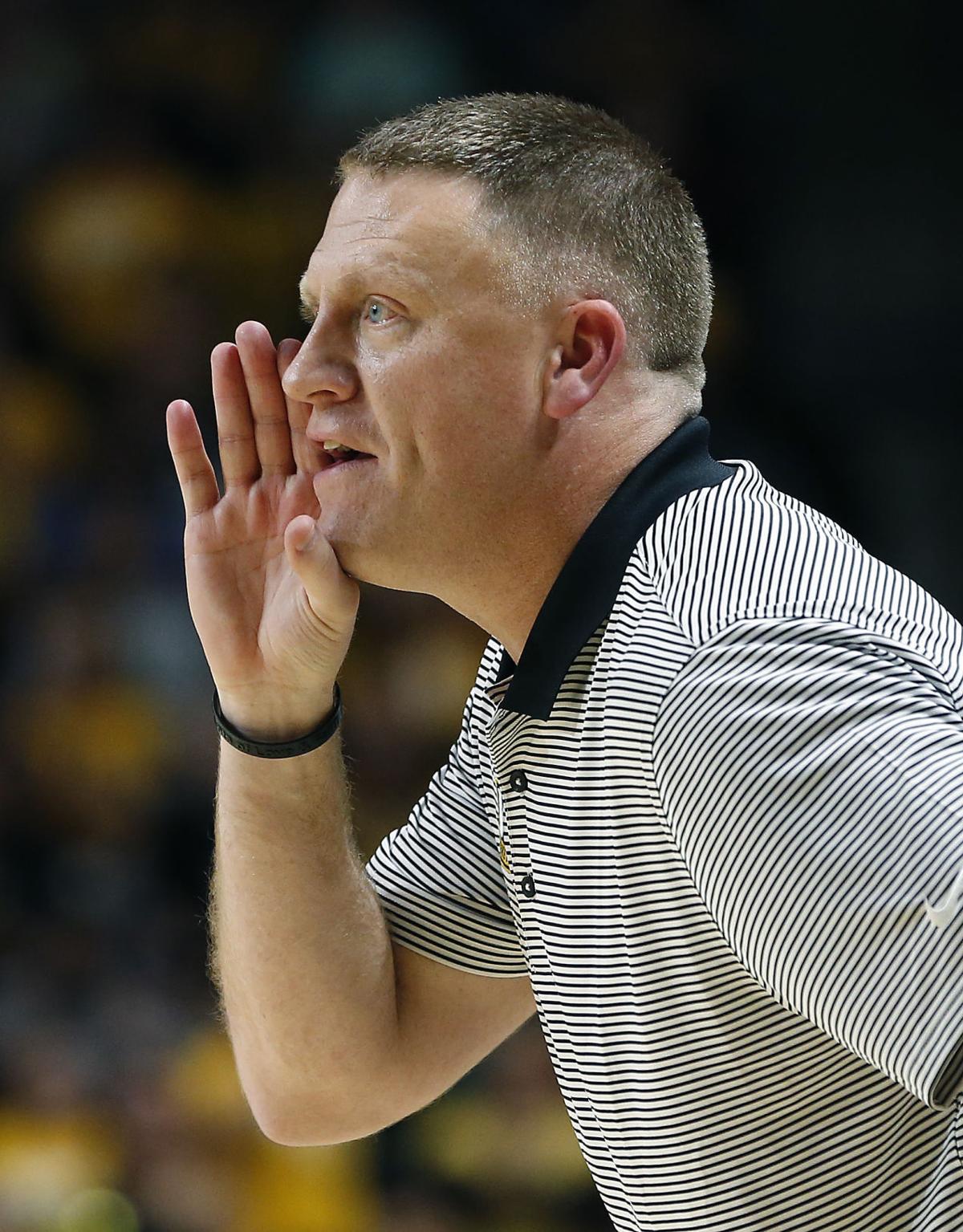 VCU's head coach Mike Rhoades during 2nd half against Liberty at the Siegel Center in Richmond VA Thurs. Oct. 26, 2017. 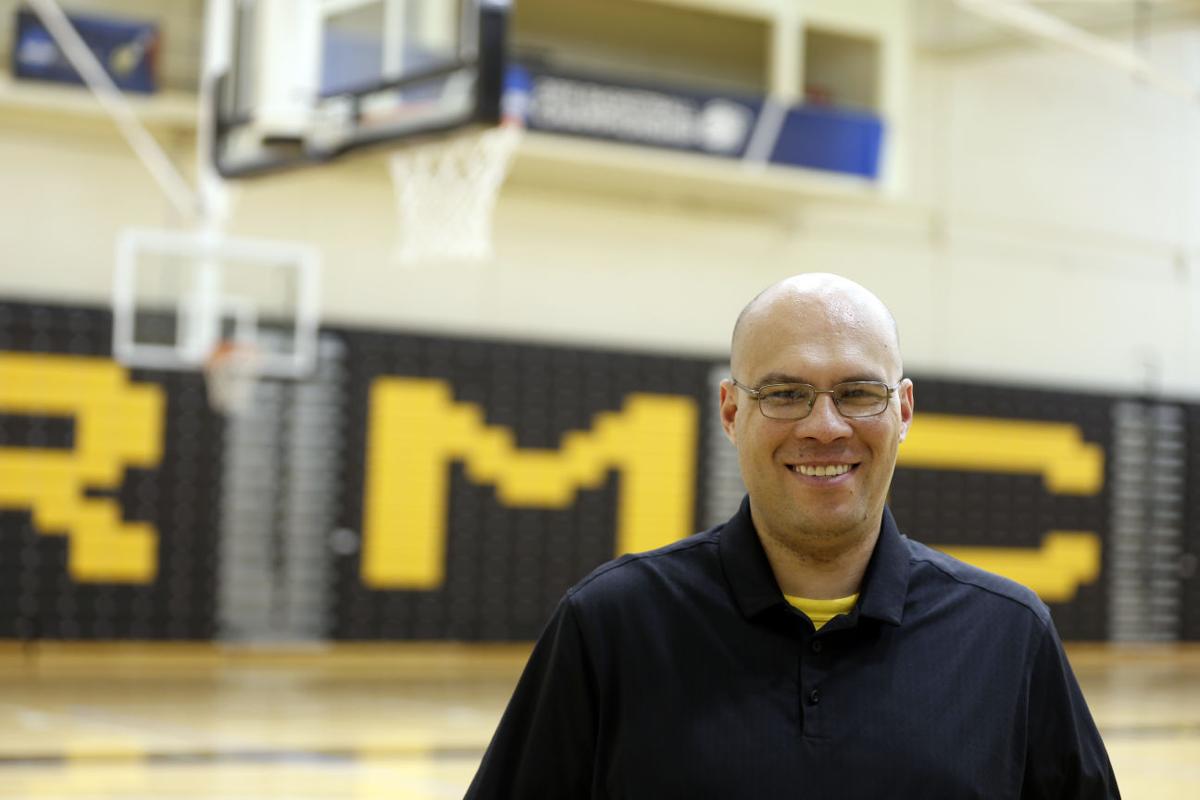 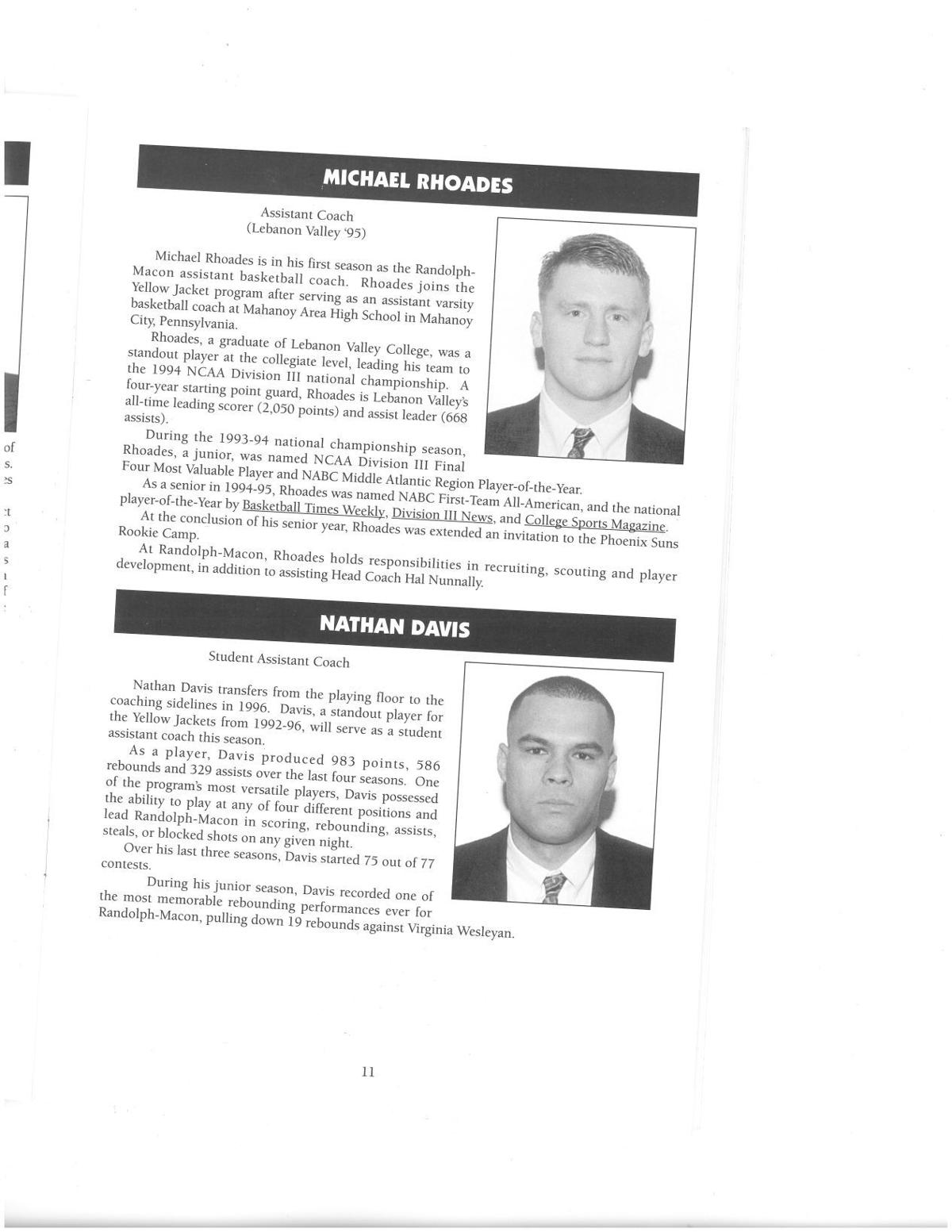 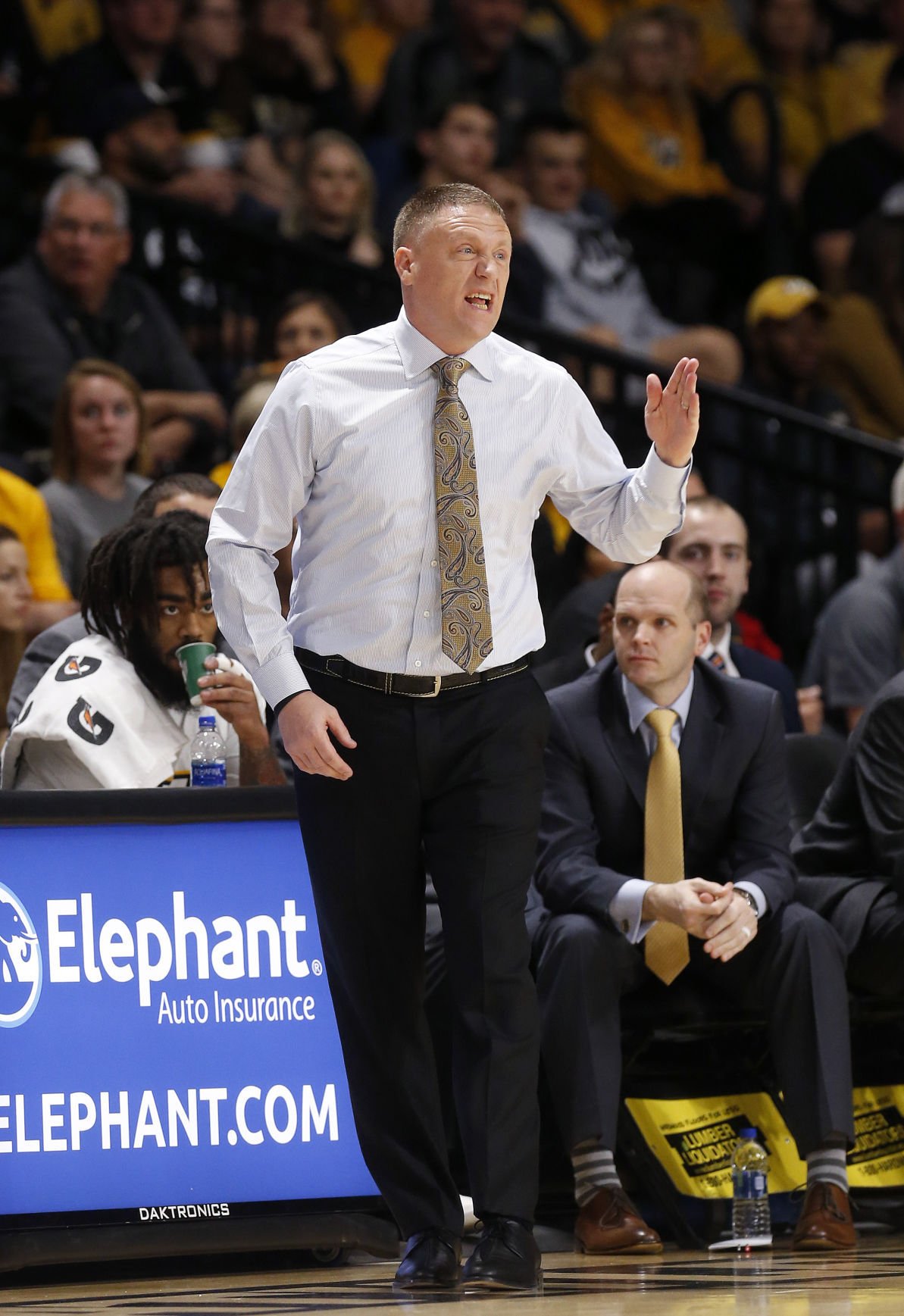 VCU’s head coach Mike Rhoades gives an instruction to players as the team plays against ODU during the first half of a NCAA men’s basketball game at VCU in Richmond on Saturday, December 2, 2017. 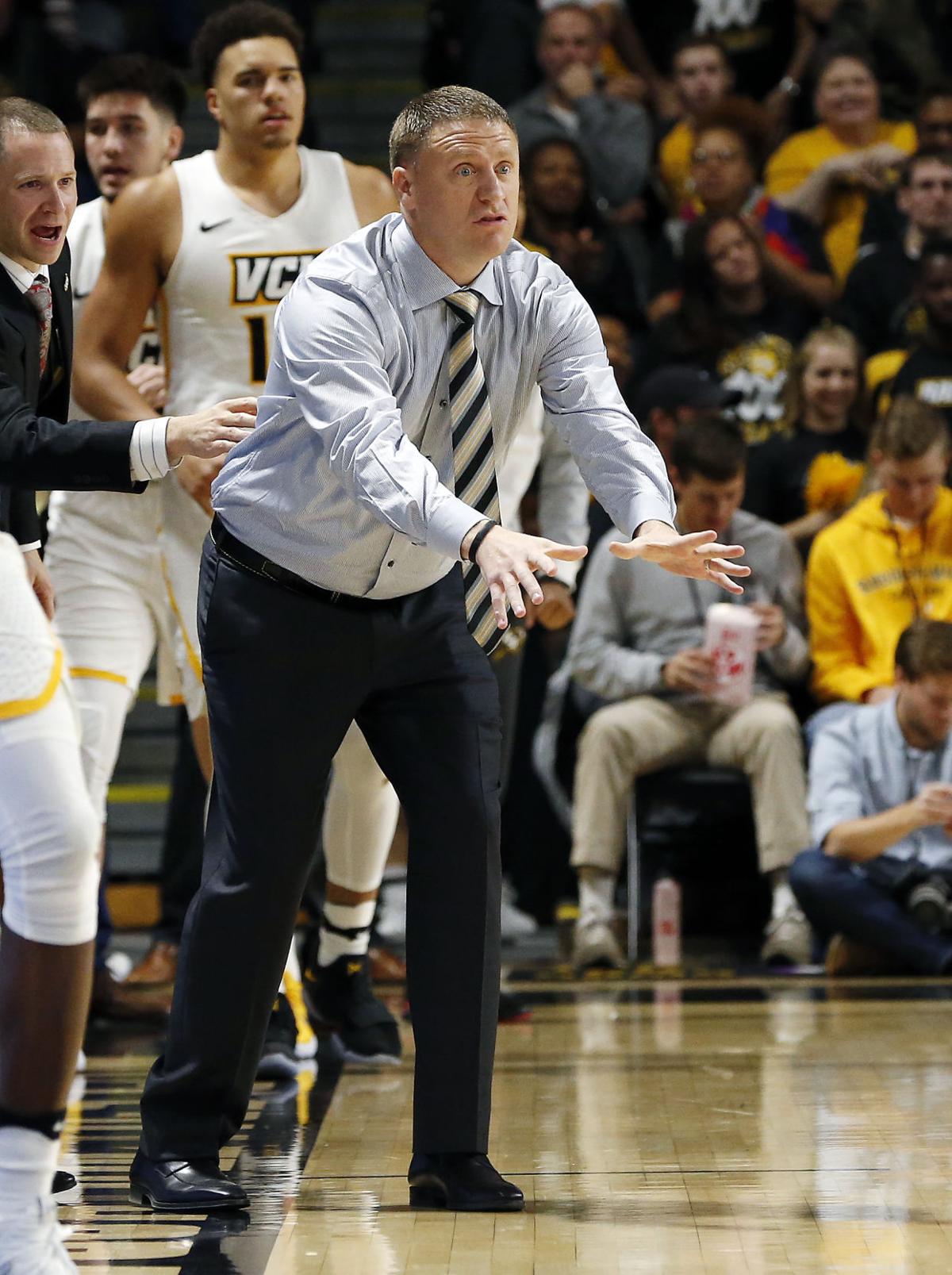 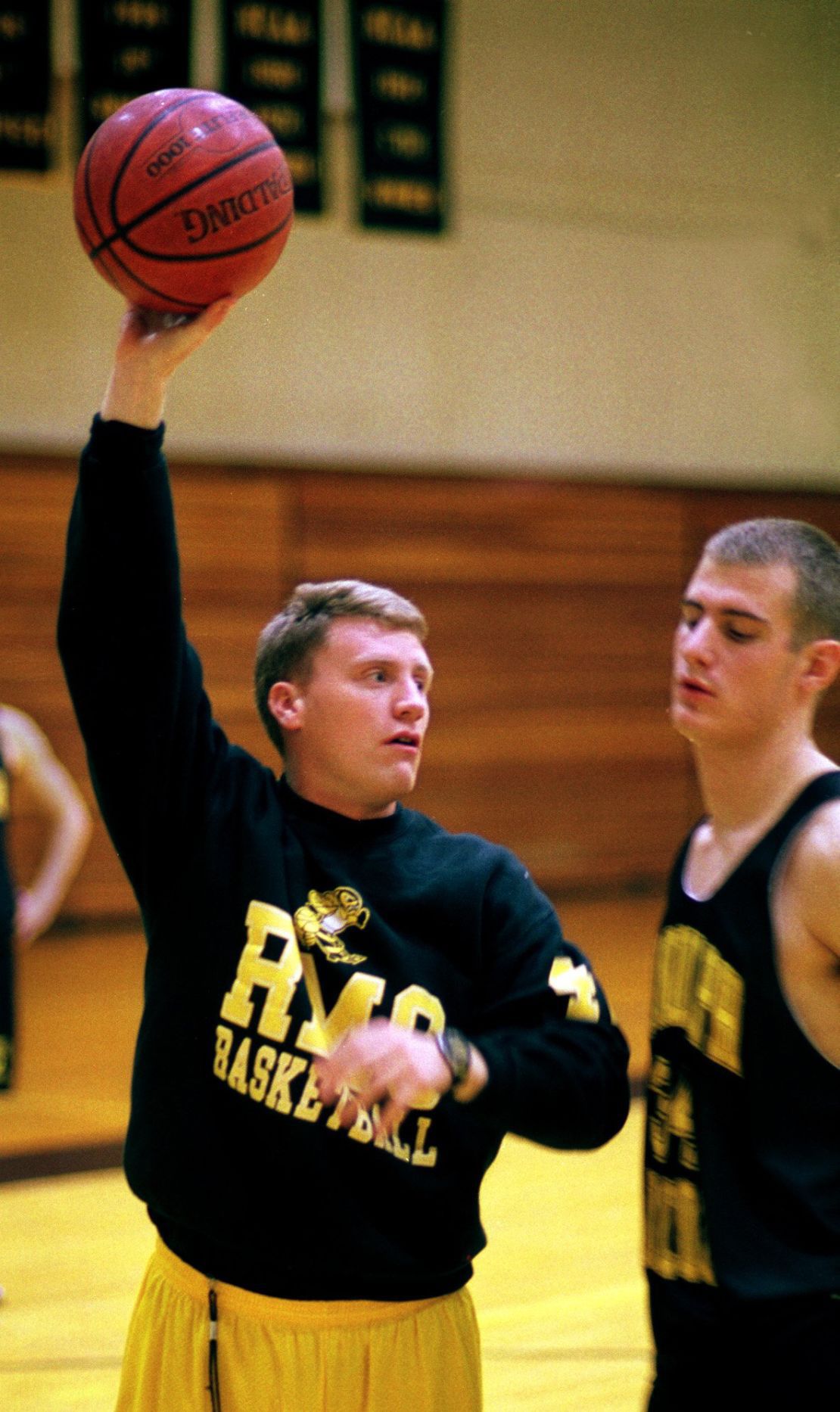 During the 1996-97 season, two young coaches got their start at Randolph-Macon under Hal Nunnally, the Yellow Jackets’ longtime former coach.

Nunnally brought on a 23-year-old Mike Rhoades as an assistant, about a year after he was named USA Today Division III national player of the year at Lebanon Valley College. A 22-year-old Nathan Davis, fresh off four years playing for Nunnally, was added as a student assistant as he completed a second major.

The two have been great friends since then, Rhoades said. Davis said in the past 20 years he and Rhoades rarely have gone more than a couple of weeks without speaking, or at least texting.

Amid those 20 years, each was a head coach at Randolph-Macon, then moved into Division I head coaching positions. On Saturday night, Davis, now Bucknell’s coach, will return to Richmond to face Rhoades’ Rams.

“It’ll be great,” said Davis. “I mean, the outcome of the game’s not going to affect our friendship in any way whatsoever.”

“We just were in the office all the time,” said Rhoades. “And trying to make our guys better. And two young guys working for Coach Nunnally ... trying to figure it out. We just had a blast.”

Rhoades, after three seasons as an assistant at R-MC, became the head coach there in 1999. He had a successful 10-year tenure when he went 197-76 and made a pair of NCAA Division III Sweet 16 appearances.

When Rhoades became an assistant at VCU in 2009, he handed the keys at Randolph-Macon to Davis. The Yellow Jackets reached the Final Four in Davis’ first season.

“I was very fortunate that Mike had left it in such a great state,” said Davis. “Because usually you don’t get jobs like that where things are rolling along. And I was able to take over a team that was good enough to go to the Final Four.

“We had a great group of guys. They were disciplined, they were eager to learn. And I think it all traces back to the culture that the program has, and the values he instilled in them before I got there.”

While Rhoades was an assistant at VCU and Davis was leading Randolph-Macon, they lived less than a mile apart in Ashland. Davis’ oldest child and Rhoades’ middle child went to school together.

But the dawn of their college coaching careers came in the 1996-97 season at R-MC. And with their similar roots — Davis played for Nunnally, Rhoades worked for him; Rhoades played for Flannery, Davis worked for him — the two have had similar influences on their coaching styles.

“There are some things that we both do that we know where they came from,” said Rhoades. “It’s just how it goes. But there’s a lot of similarities that way. We play differently, but we also, we look at the game very similar as well.”

Mike Rhoades and Nathan Davis in their Randolph-Macon years

VCU's head coach Mike Rhoades during 2nd half against Liberty at the Siegel Center in Richmond VA Thurs. Oct. 26, 2017.

VCU’s head coach Mike Rhoades gives an instruction to players as the team plays against ODU during the first half of a NCAA men’s basketball game at VCU in Richmond on Saturday, December 2, 2017. 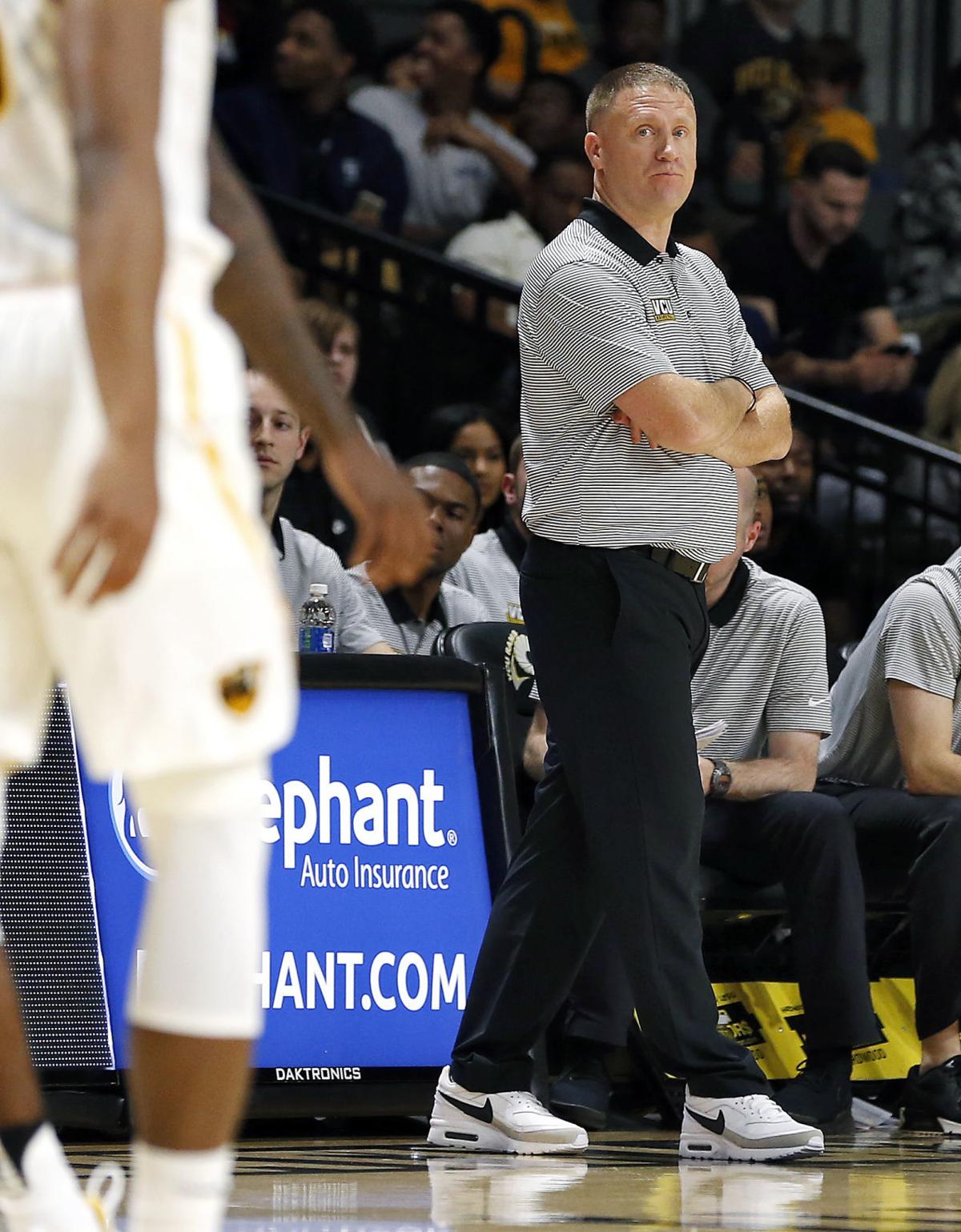