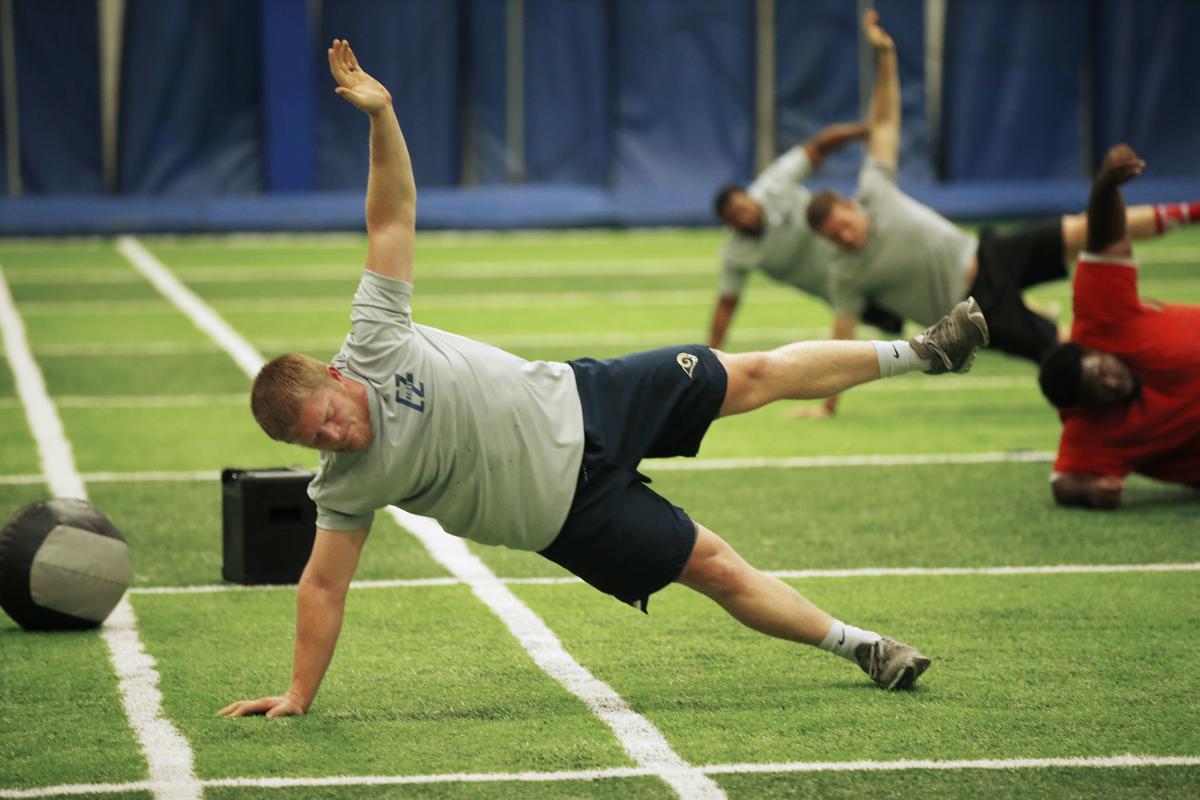 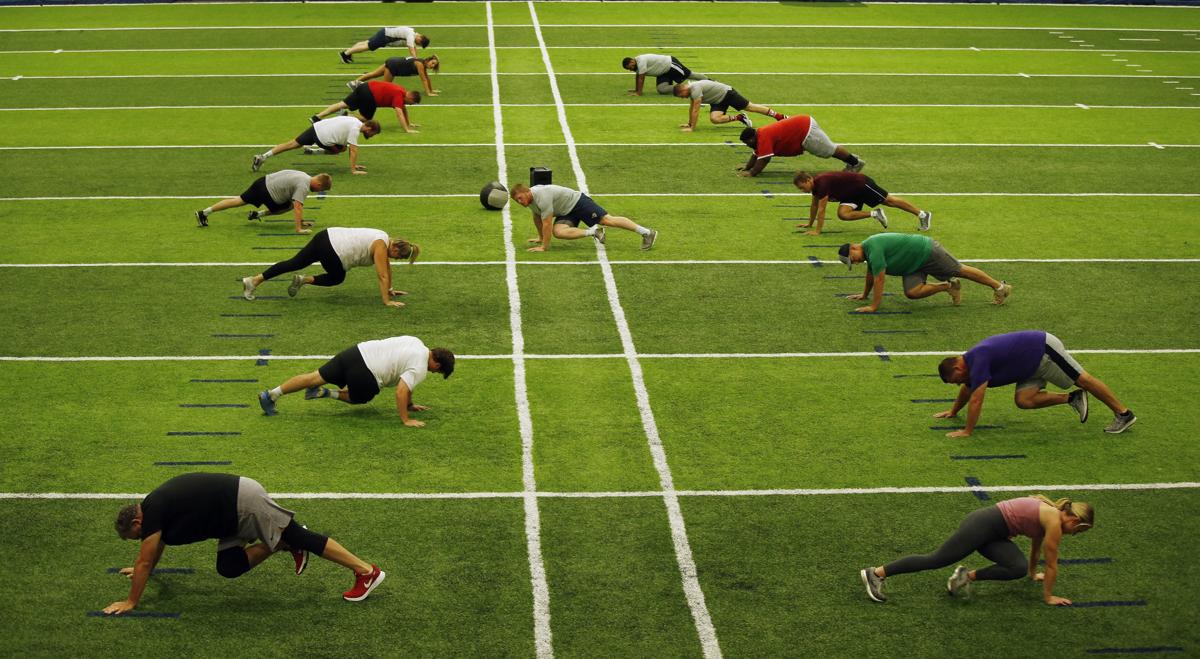 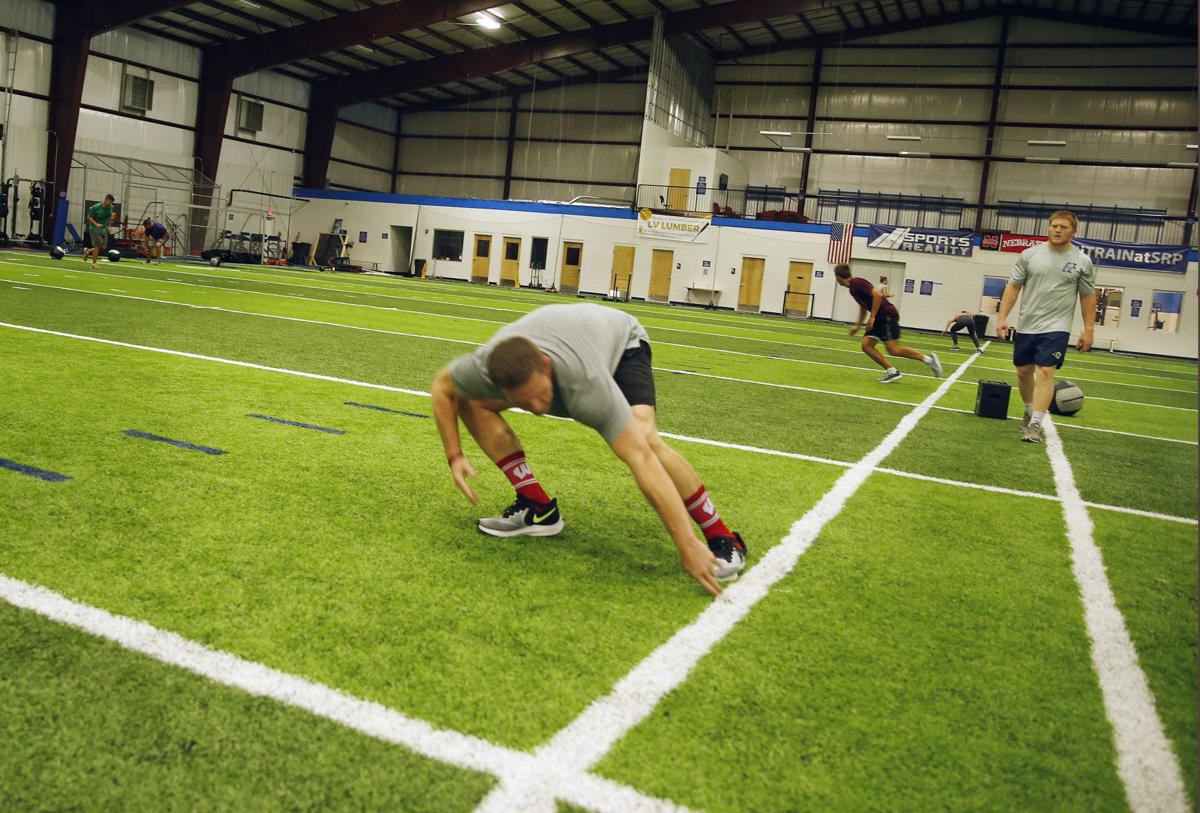 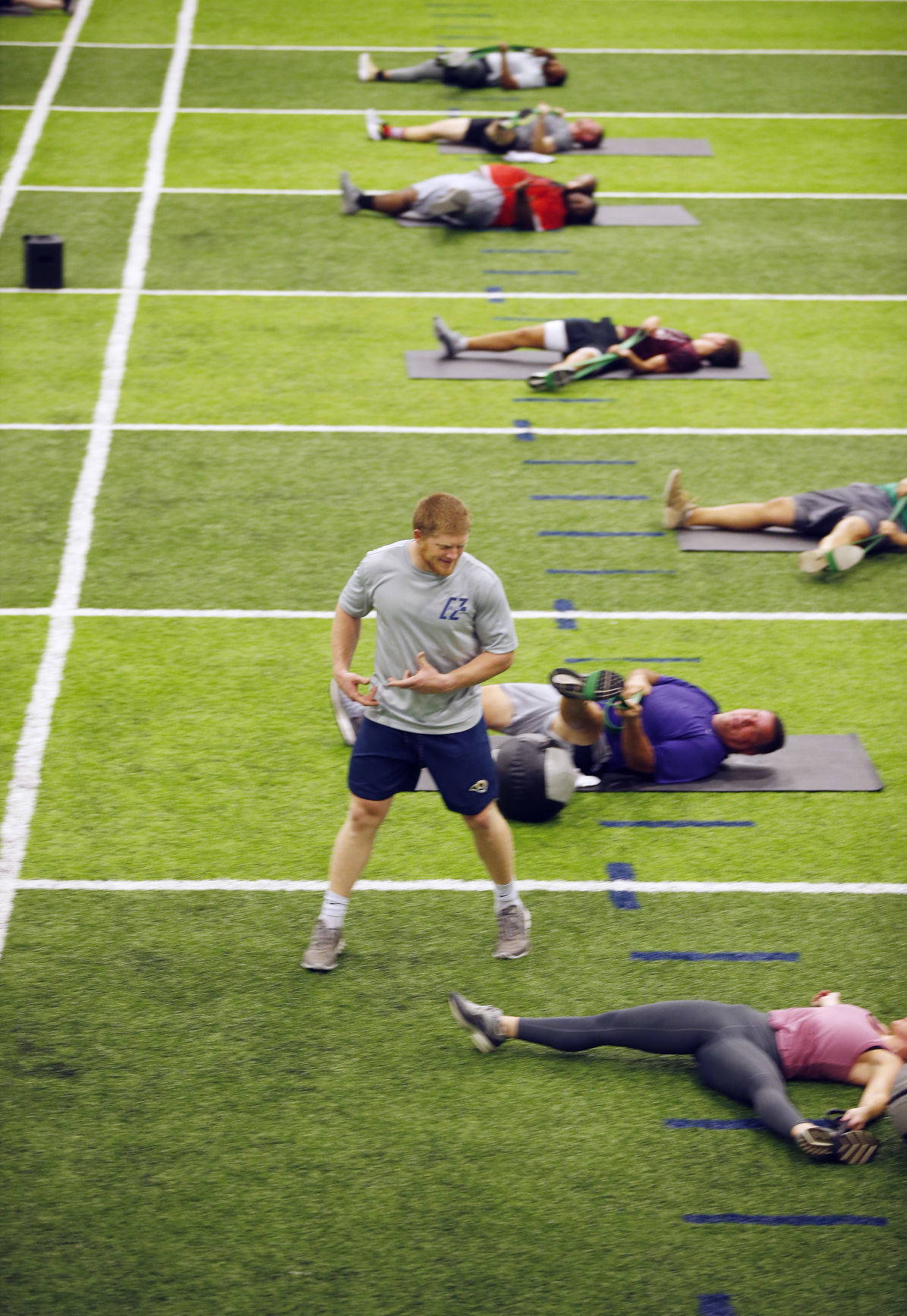 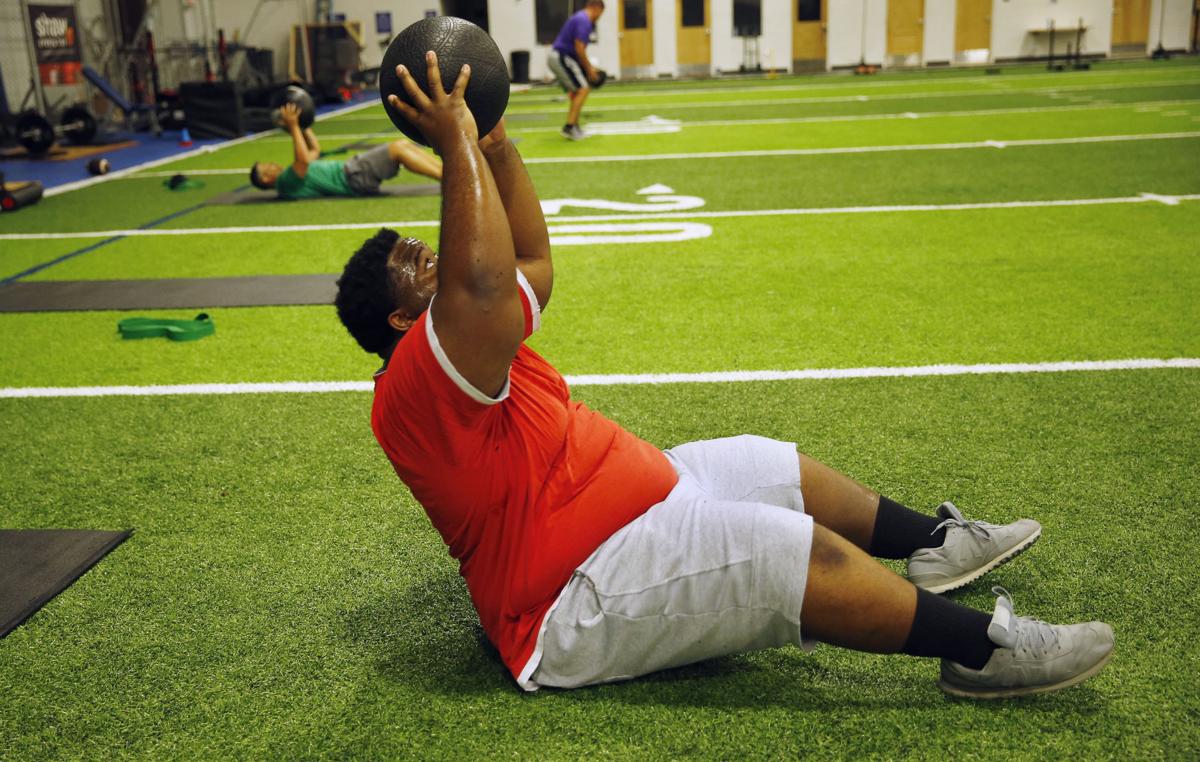 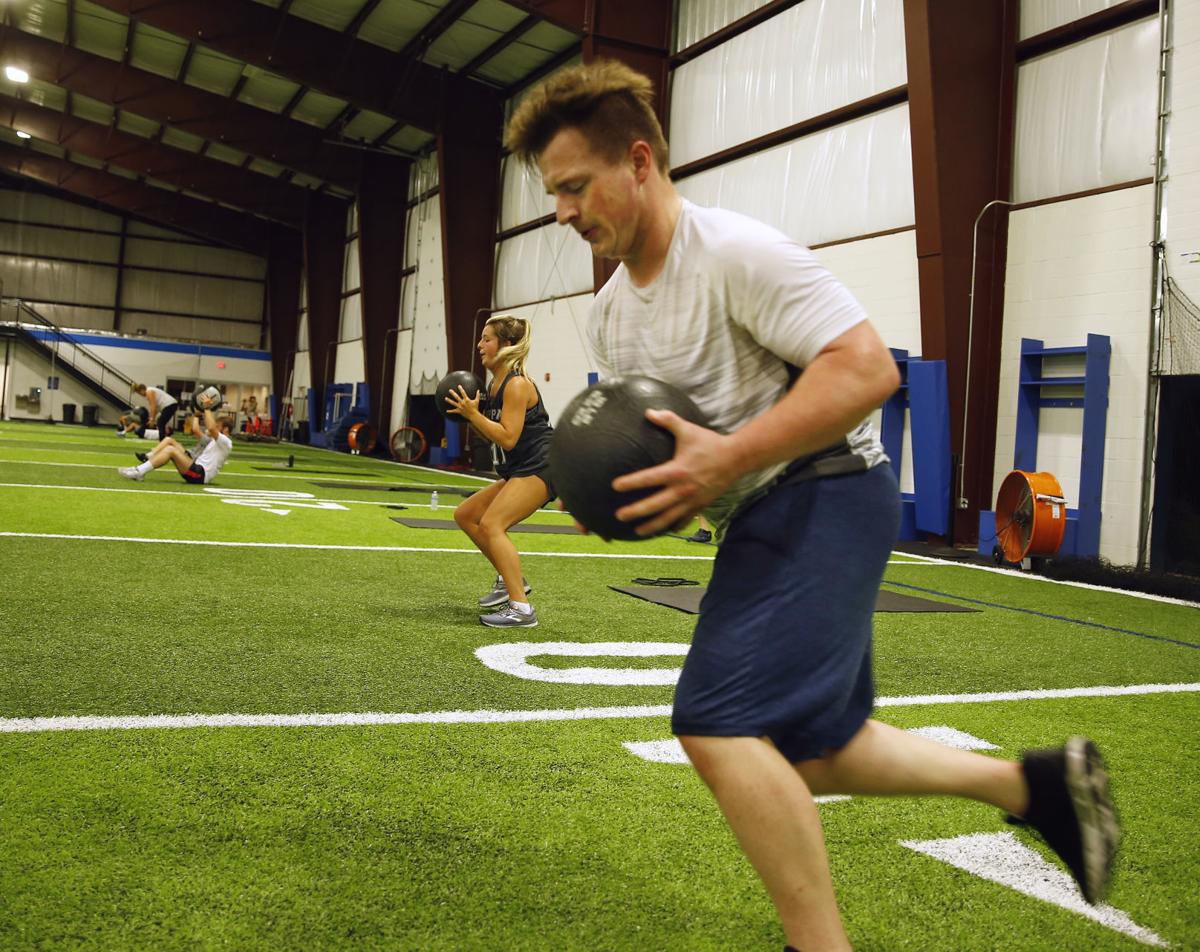 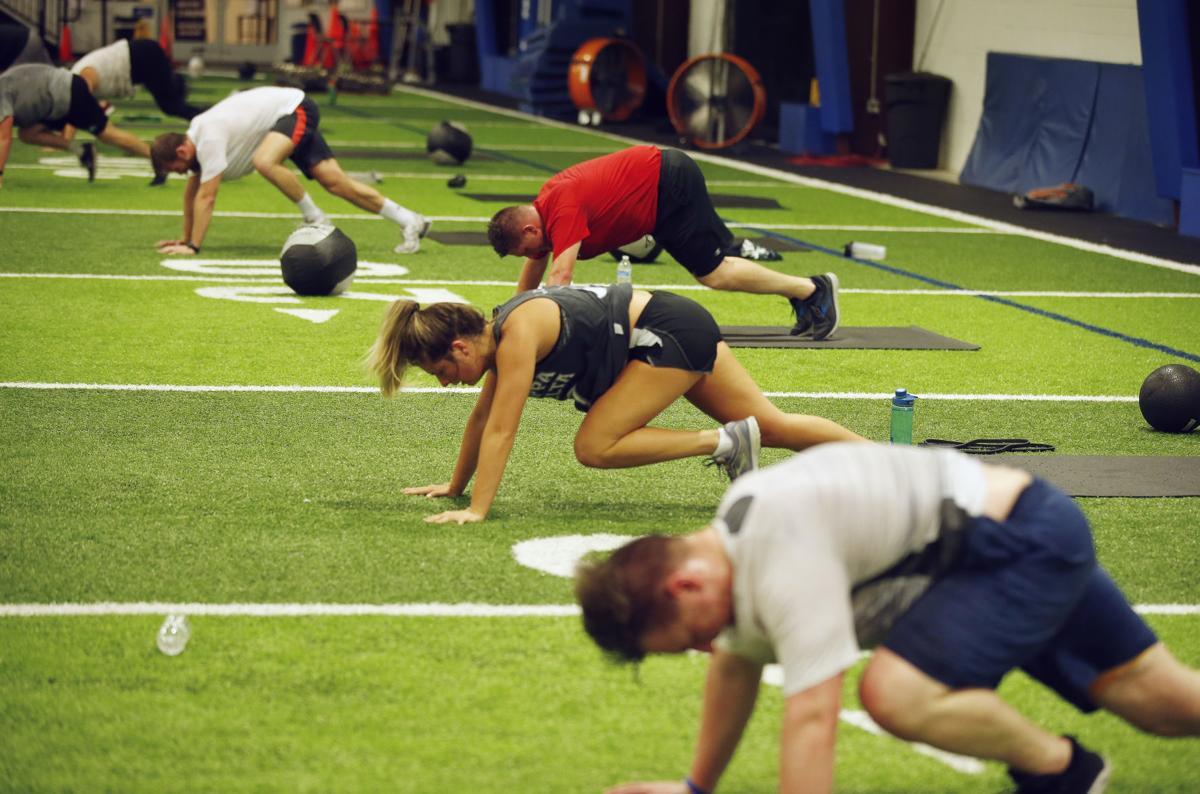 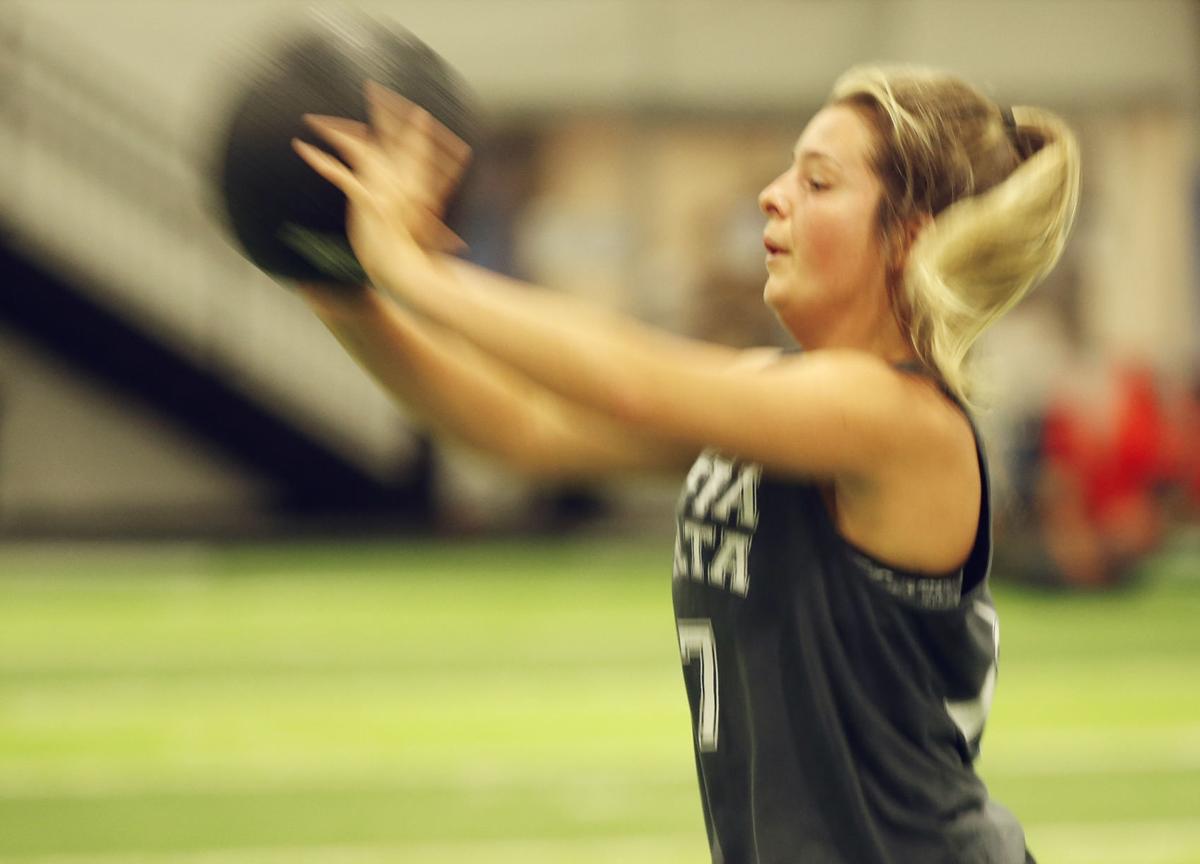 Brit McPhee tosses a heavy ball during one of the exercise drills conducted by Hanover coach Sam Rogers, a former Virginia Tech fullback, at Sports Reality in Hanover County. Rogers’ program creates a culture in which participants push and challenge each other. 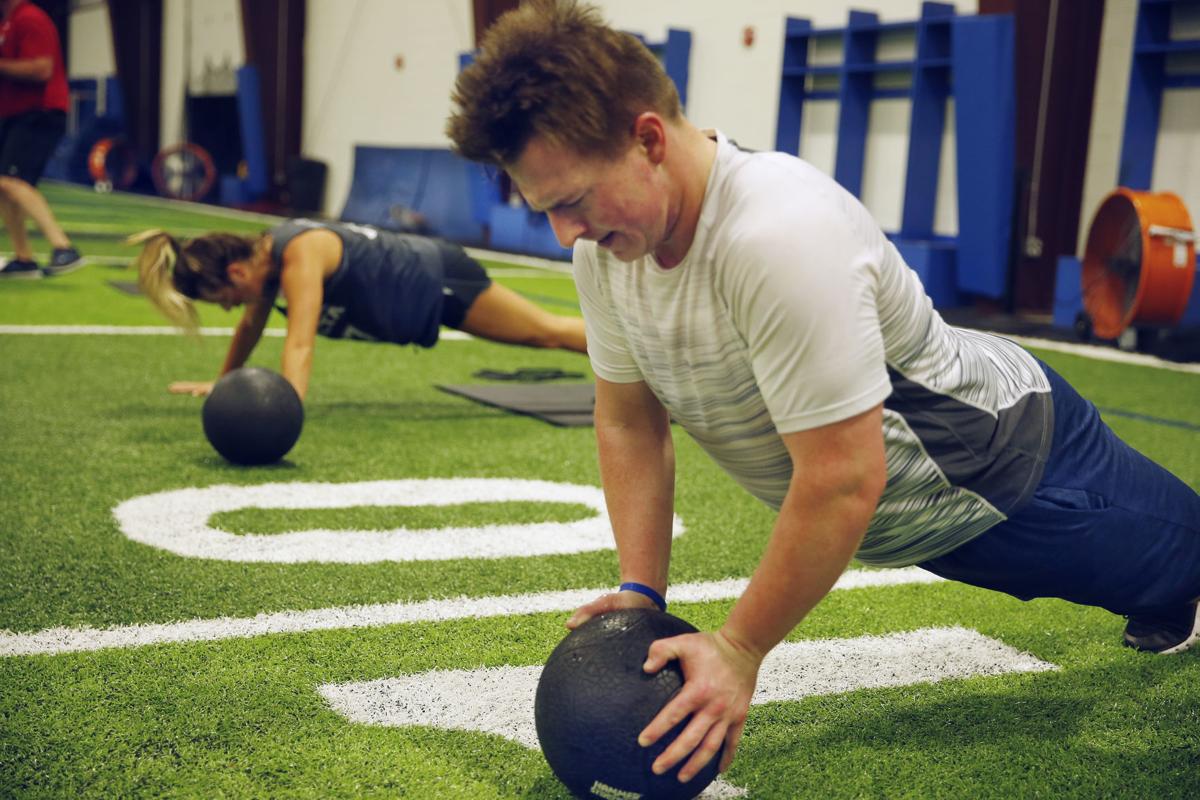 Brit McPhee tosses a heavy ball during one of the exercise drills conducted by Hanover coach Sam Rogers, a former Virginia Tech fullback, at Sports Reality in Hanover County. Rogers’ program creates a culture in which participants push and challenge each other.

As Hanover High School’s football program built itself from a winless start-up to a title contender more than a decade ago, much of the foundation for that turnaround took root in the team’s weight room. That’s where assistant coach Jake Just would put the players through grueling workouts, the kind that young athletes simultaneously crave and dread.

So before each workout, Sam Rogers — the program’s do-everything star from 2010 to 2013 — would check in with Just, to see what the coach had in store for that day.

“I remember coming up to Coach Jake before each workout and saying, ‘What do we have today, man?’” Rogers recalled. “He’d be like, ‘Sam, don’t worry about it. It’s going to be an easy day.’ And it became a thing.”

For Just, it was a way to take some of the edge off what was about to happen, what he was about to ask of his athletes.

“That was kind of our tagline,” said Just, who said he picked up the slogan from another former coach at Hanover. “I would just repeat that phrase over and over and over. Just get it in their heads that it was an easy day.”

Now, that story is the inspiration for Rogers’ adult workout program, EZDay, which he runs every Monday, Wednesday and Friday at 5 a.m. at Sports Reality in Mechanicsville, across the street from Hanover High, where he is the football coach.

Rogers, who starred at Virginia Tech and spent a year on the L.A. Rams’ practice squad, began the workout program with a test run in November, then launched it officially at the Sports Reality facility in January. Now, he has about 40 dedicated members enduring his “EZ” workouts that, like those from his high school days, are anything but easy.

They are high-intensity cardio sessions that focus on partner and team exercises, while still maintaining COVID-19 social distancing. Rogers will pair the members of the class with partners who line up across the facility from each other. They “meet in the middle,” though still at least 15 feet apart, then one runs back to their workout mat and does an assigned exercise.

When the first person completes that, they run back to the middle, at which point the partner runs to their mat to complete the exercise. They try to repeat this as many times as possible in the time Rogers has allotted for the particular drill.

The workouts always conclude with a “circuit.” The class splits in half and each half is a team. With members starting at their mats, they run essentially a workout relay race.

“You’re not just there for yourself,” said Ellis Whitshire, a 37-year-old from Rockville who is a member of the program. “You’re there to push and challenge everybody else you’re working out with. It’s a great culture.”

For Rogers, his passion for the program is about that as much as it is the exercise.

“There’s a certain group that wants to work out at 5 a.m., a certain type of person,” Rogers said with a laugh. “But it’s also people that just want to be around a community that want to build each other up. The mission of EZday is to build a community of people who go beyond themselves to encourage others.”

That’s where Rogers sees the most overlap between football — one of the most team-oriented of sports — and his EZDay program. And it’s worked.

Rogers said that while people are often apprehensive about committing to the early-morning schedule, most who give it a try end up hooked. He’s expanded the program to have an online offering, a Tuesday-Thursday program called Pre-Game, that emphasizes stretching and is designed to be a warm-up for the day, and afternoon program for aspiring college athletes.

That overlaps with his other job, coaching his alma mater.

At Hanover, Rogers set school records for touchdowns, passing yards and rushing yards and led the Hawks to the state playoffs all four years.

He walked on at Virginia Tech, won the starting fullback job as a true freshman and quickly earned a scholarship. His coaches lauded his work ethic and study habits.

He amassed 1,494 yards rushing and receiving and scored 11 touchdowns.

And Rogers was a fan favorite. Among those in the stands cheering for him was Whitshire, a Hokies season-ticket holder at the time.

“You could be in the stands and see, he gave it his all every play,” Whitshire said. “And from what I see, it’s extended way beyond his football career. Every morning, he’s pumped up motivated ready to go. Ready to go. You walk in and he’s got a smile on his face, ready to tackle the world and get the best out of everybody.”

Last week, when Just — who now lives in Western Pennsylvania — was back in town visiting family, Rogers persuaded him to come to the facility for a few days of the EZDay workouts he helped inspire.

“It was kind of a changing of the guard, because I had to do what he wanted me to do,” Just said. “I did it. I struggled through it, but it was amazing.”