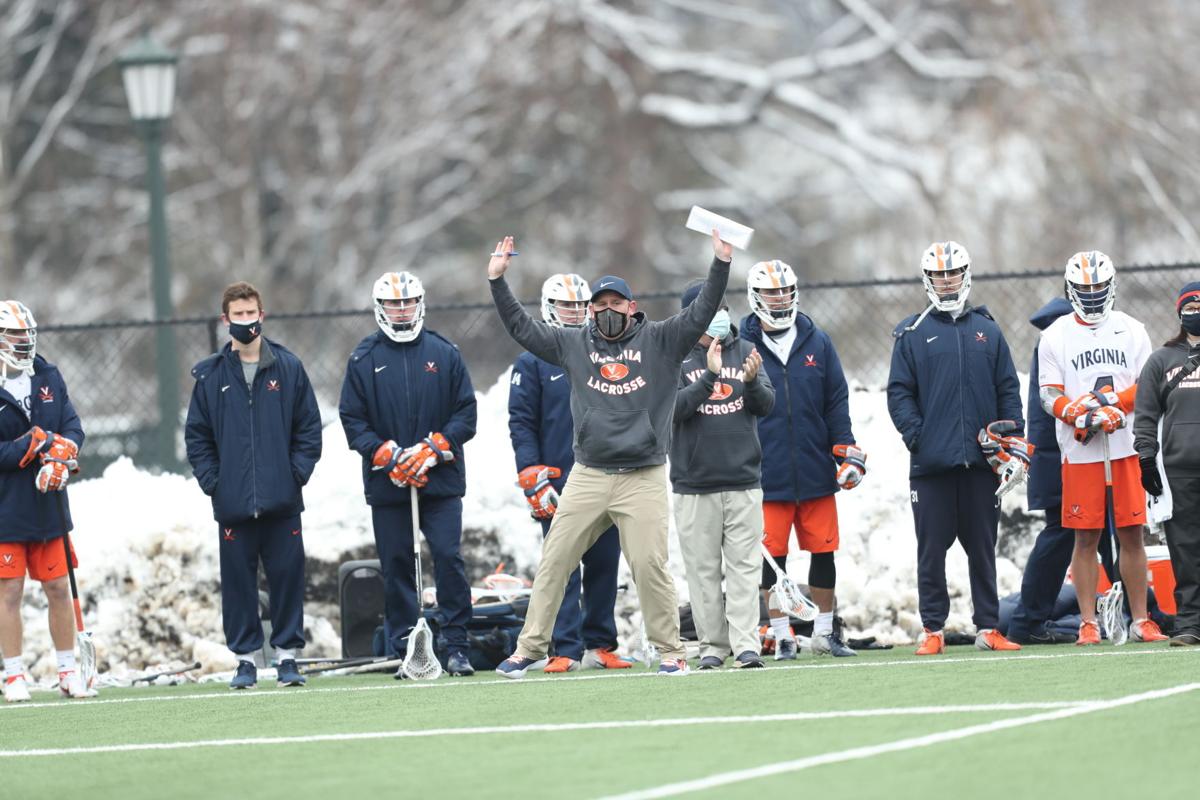 UVA assistant coach Sean Kirwan runs an innovative offense but is also becoming known for his ability to adapt on the fly to what defenses throw at the Cavaliers. 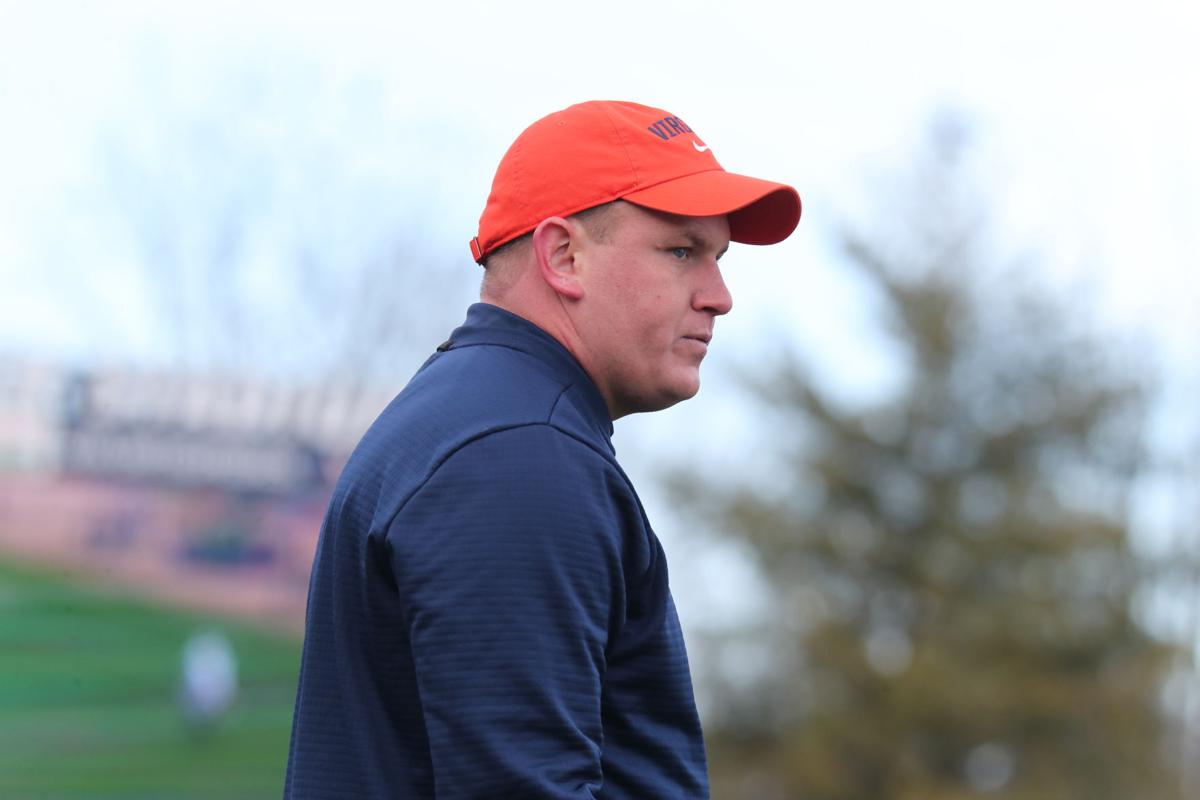 CHARLOTTESVILLE — Pat Kirwan remembers visiting Brown to watch his younger brother’s first scrimmage as the lacrosse team’s offensive coordinator. Lars Tiffany had tapped Sean Kirwan to install a fast-paced, aggressive attack that once dominated the college game, but had fallen out of style since the late 1990s.

Kirwan had learned and refined his system at Tufts University, first as a record-setting goal scorer there from 2009-2012, then as an assistant coach for Mike Daly’s Division III powerhouse.

In 2015, he joined Tiffany’s staff at Brown. Could the same breakneck, free-flowing offense thrive at the Division I level?

“There was a lot of fear of the unknown going into that first scrimmage — ‘Is this going to work?’” recalled Pat Kirwan, who played lacrosse at Cornell. “I think everyone involved was a little worried what the outcome was going to be. The first 5, 10 minutes didn’t look good. It was pretty sloppy and you kind of started to grind your teeth thinking, ‘Maybe this isn’t going to work.’ Then things started to click.”

Tiffany’s move was a gamble, but a calculated one. Loyola had begun to have success playing a fast-paced, transition-heavy offense.

Tiffany had longed to return to the style of play that more closely resembled the sport’s Native American origins, when its focus was on the development of men and of warriors. At Brown, he had the perfect opportunity.

The team had enough talent to play fast and furious, without an excess of outside scrutiny that might discourage experimentation.

“It was liberating,” said Tiffany. “It was so much more fun to coach that way.”

So he and Kirwan gave it a shot.

“I think there were a lot of those questions,” said Daly, who frequently had coaches from all levels visit Tufts to study the offense. “Frankly, we had a lot of Division I coaches come to our practices and say, ‘That’ll never work in Division I.’”

Brown ended up ranked fifth in the nation in scoring in 2015, Kirwan’s first year there, averaging 13.9 goals. The next season, it led the country at 16.3 and reached the national semifinals, the breakthrough campaign that helped Tiffany land the UVA job.

He brought Kirwan with him to Charlottesville, along with defensive coach Kip Turner. The trio helped return the Cavaliers’ program to the elite ranks of the college game, winning the 2019 national championship.

This season, after a slow start, Virginia has scored 18 goals in each of its past two games, wins over nationally ranked Richmond and North Carolina.

Thursday night, Kirwan’s offense gets a stiff test when No. 4 UVA hosts No. 3 Duke.

The Blue Devils rank second in the ACC and 11th nationally in scoring defense, giving up just 9.3 goals per game.

Two weeks ago, they held UNC — the nation’s top scoring offense — to 11 goals in an overtime win, more than six goals below the Tar Heels’ average.

But Kirwan’s unit is humming going into this meeting, in large part thanks to his adjustments. After an earlier loss to North Carolina, he actually had his group slow down and play with more structure than his teams normally do, allowing the Cavaliers to find their rhythm offensively.

Since then, UVA has outscored its opponents 62-49, going 4-0 in that stretch while steadily ramping the pace back up. Senior attackman Matt Moore has gotten on a roll as a scorer and distributor, senior midfielder Dox Aitken has regained his All-American form after spending the fall with Villanova’s FCS football team, and redshirt freshman attackman Connor Shellenberger has been living up to his hype as the nation’s top recruit in 2020.

“The core principles are the same,” said Sean Kirwan, 31. “We’re still trying to put pressure on our opponent in every phase of the game.”

Kirwan’s low-key demeanor stands in stark contrast to the aggressive style of ball he demands from his players, his enjoyment of the game rivaled only by his love of being a father to his young son, Cameron.

Kirwan’s future as a coach was evident from an early age. His father, a former player at Hobart, placed mini lacrosse sticks in the cribs of all four Kirwan brothers.

Sean Kirwan would sit at the family dinner table in New Jersey sketching out offensive plays he wanted his father — who coached the boys youth lacrosse teams — to use in upcoming games.

That future further crystalized in college, when Daly recalled him watching video with older offensive players, breaking down every aspect of previous performances and upcoming opponents.

“I’ve always loved the intricacies and the strategy, the X’s and O’s that come with the game,” said Kirwan. “To take this system that I got to be in with so much freedom, it allowed my creativity to take off.”

When Kirwan’s college career ended, he went right into coaching. He formed a relationship with Tiffany while at Tufts, working Brown’s prospect camps. It started him on a path that appears destined to include becoming a head coach one day.

But for now, Kirwan is in “no rush” to move on from Virginia, where Tiffany gives him the freedom to run the offense, UVA’s elite standing brings him talented pieces to position year after year and he’s revered for his ability to make in-game adjustments.

“He’s one of the best at understanding what the opposing team is doing ... while standing on the sideline,” said Tiffany, “Most of us need that video replayed three times on Monday or Tuesday.”

UVA assistant coach Sean Kirwan runs an innovative offense but is also becoming known for his ability to adapt on the fly to what defenses throw at the Cavaliers.