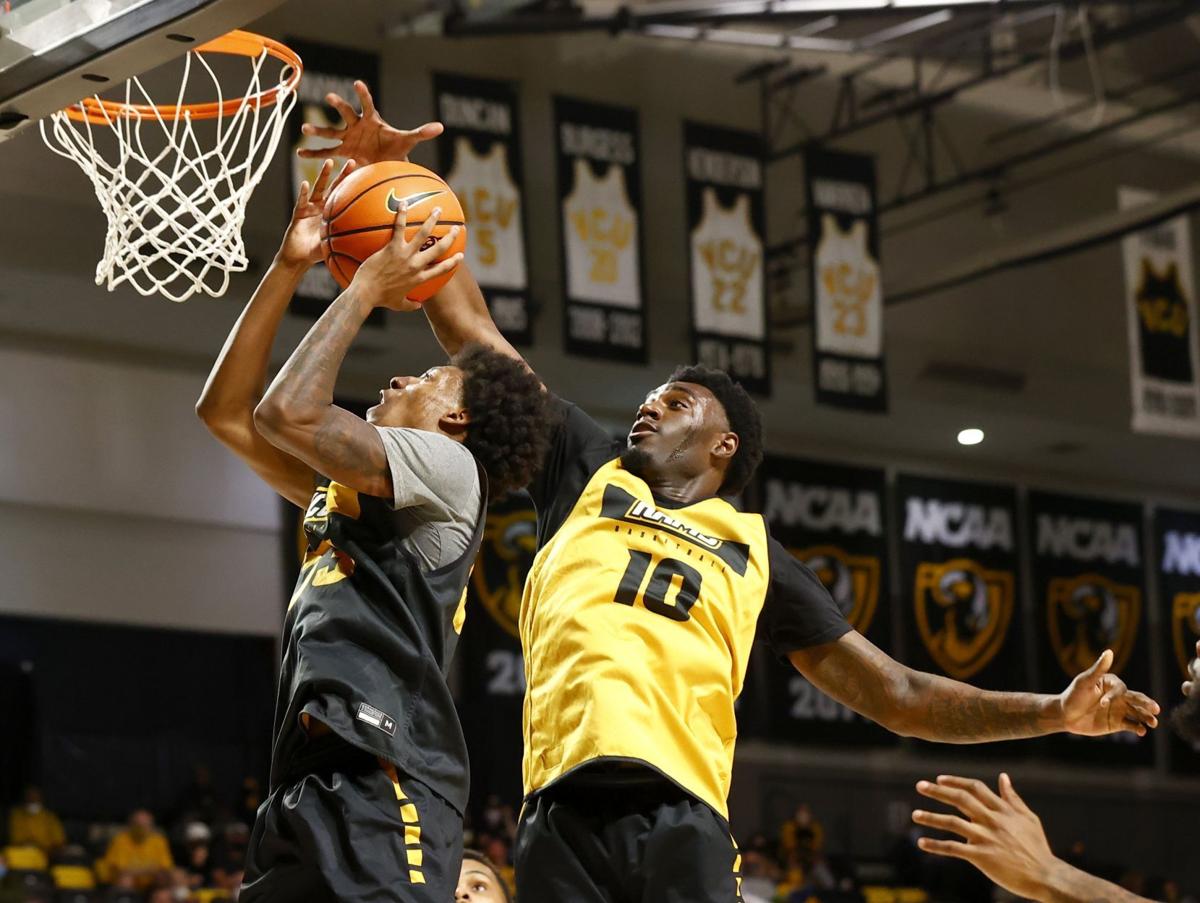 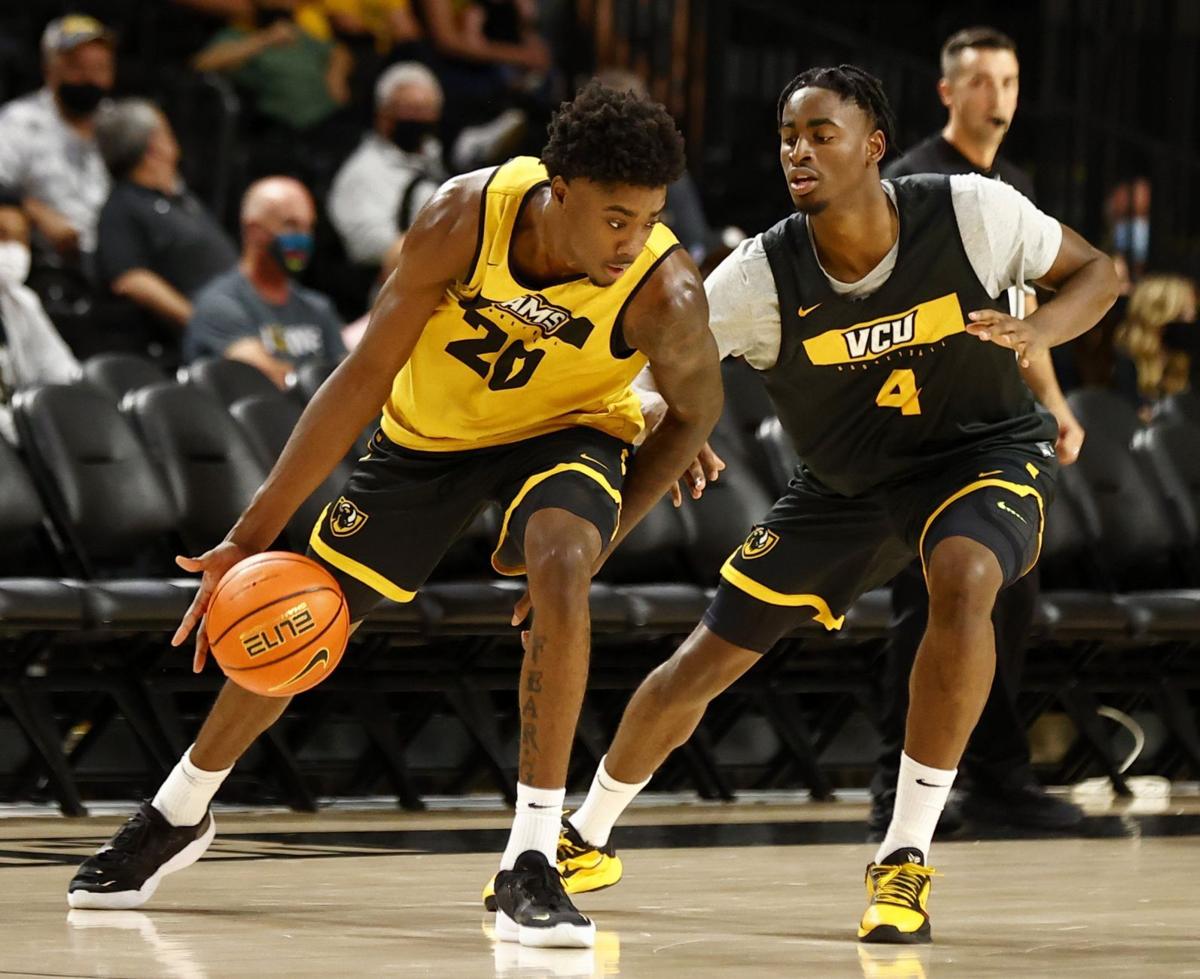 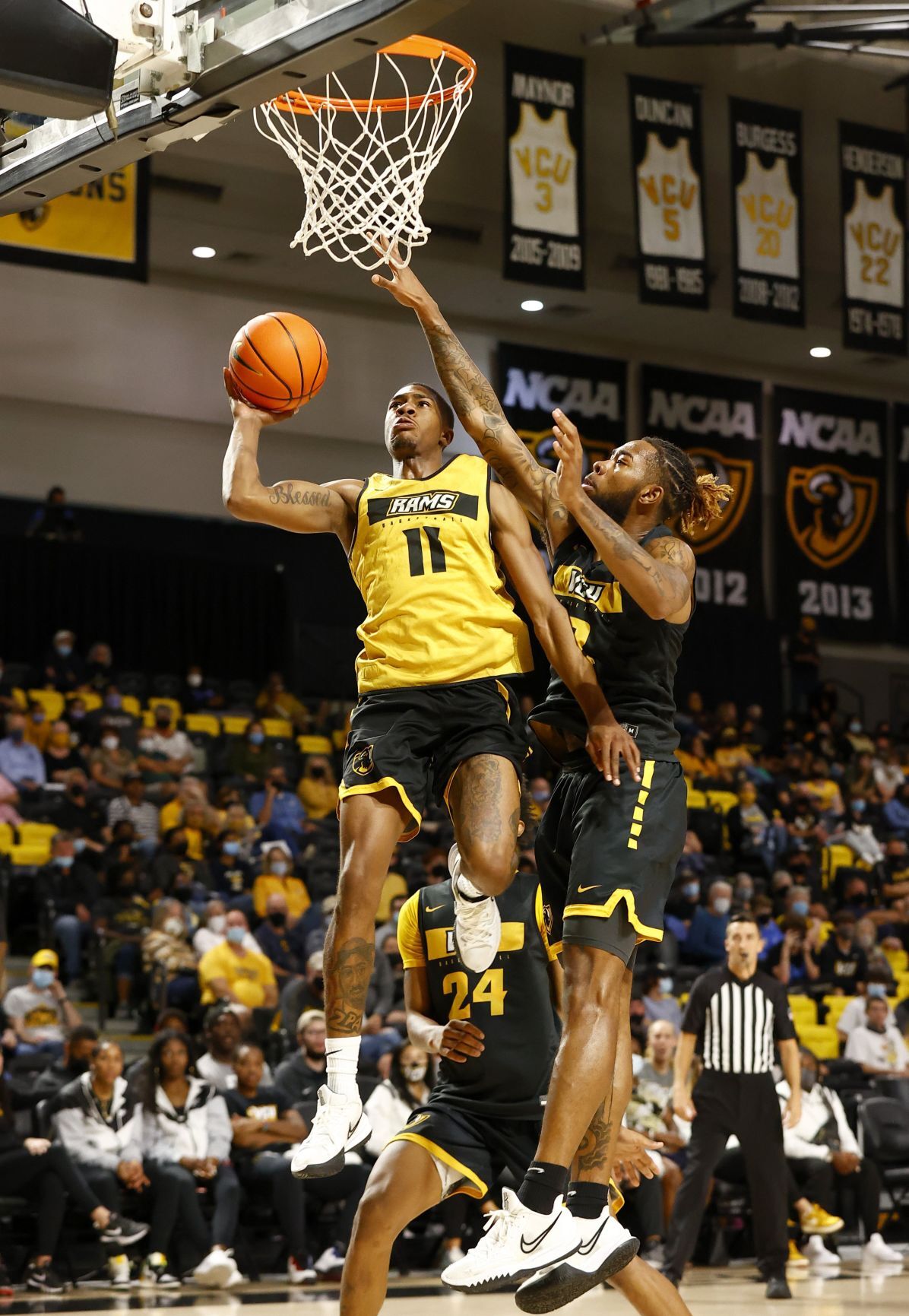 VCU’s KeShawn Curry shoots against Mikeal Brown-Jones in the Black and Gold Game, an annual basketball scrimmage, at the Siegel Center. 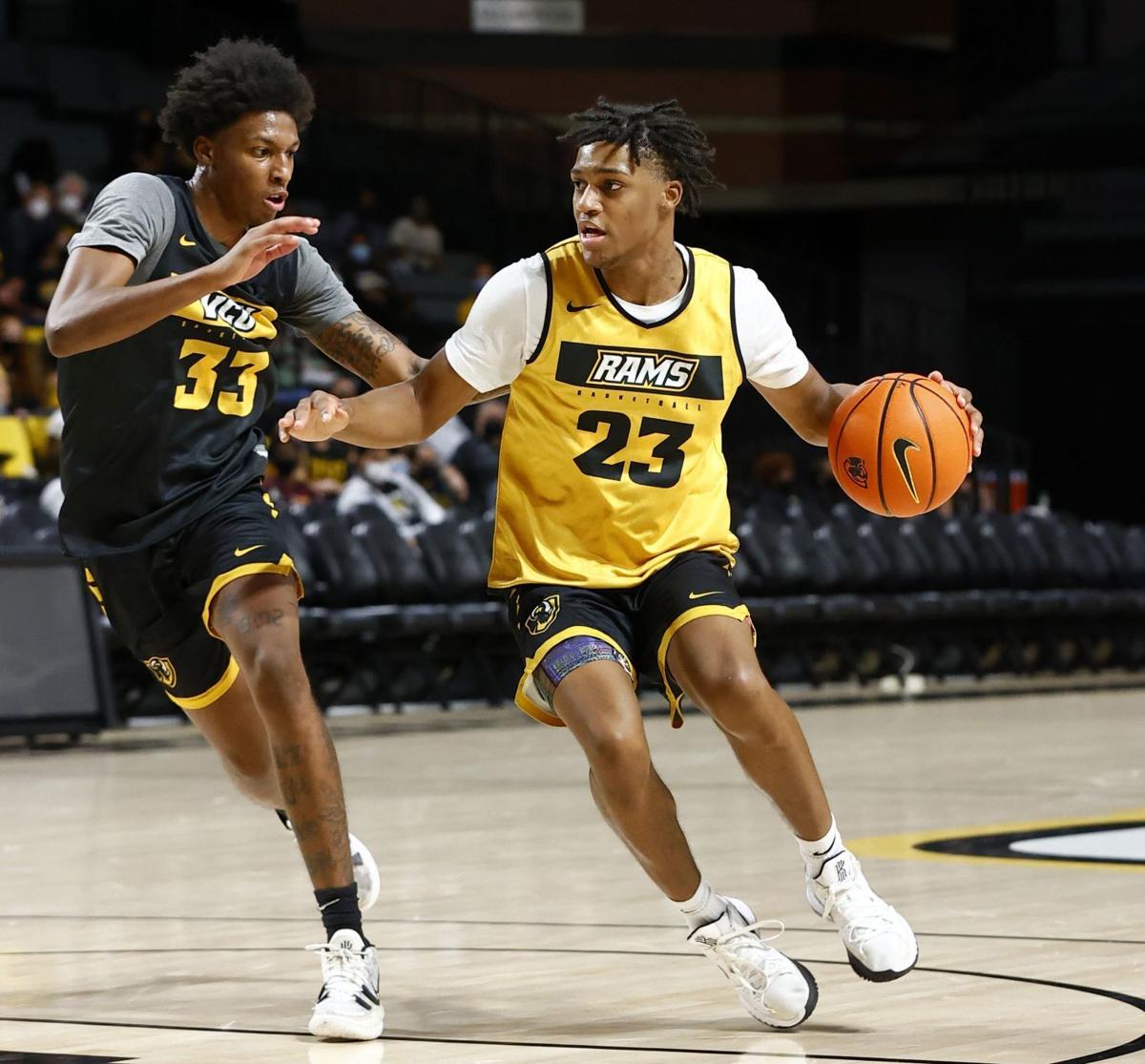 For the first time in more than 19 months, the hoops atmosphere at the Siegel Center on Saturday night was closer to normal. VCU opened the arena’s doors Saturday for the first public, on-court look at this year’s men’s basketball team, in its Black and Gold Game, an intrasquad scrimmage.

It was a return to an in-person format for the Rams’ annual preseason showcase. Last year’s Black and Gold Game shifted to a virtual program that included a 3-point shooting contest, dunk contest and more, because of the COVID-19 pandemic.

It was also a return to a more typical game-day atmosphere at the Siegel Center. Attendance throughout last season was restricted to 250 spectators each game.

“We’re back, we’re here,” VCU coach Mike Rhoades said to the crowd before the scrimmage.

There were 2,311 on hand Saturday. They saw the Rams run an alternative scrimmage format, with six four-minute periods of play . Some players changed teams after every set of two periods.

It was an unsurprisingly high-paced night of basketball, the first of two public dress rehearsals before VCU tips off for the real thing on Nov. 9 at home against Saint Peter’s.

Here are a few observations from Saturday:

Newcomers at point guard: The May injury to returning starting point guard Ace Baldwin, a ruptured left Achilles tendon, meant VCU was going to need some of its pieces to step up and fill Baldwin’s role for likely all nonconference play.

Freshman Jayden Nunn and Washington transfer Marcus Tsohonis were expected to be called on for that, and they took most of the point guard minutes between the Black and Gold squads Saturday.

Nunn started with the Gold team, and Tsohonis with the Black, and the two went head to head much of the night.

The 6-4, 190-pound Nunn, whom Rhoades called a natural point guard, showed his playmaking ability. He finished with 9 points on 4-of-7 shooting from the field, including a 3-pointer. He dished out three assists, to three turnovers, and had three rebounds. He also broke his teammates’ press defense adeptly.

“I thought J-Nunn, as a freshman point guard, he can guard the ball and he can make plays. You see him get in the lane and all that stuff,” Rhoades said. “He’s just got to continue to make the game easier and be a student of the game, which he has been up until now.”

The 6-3, 190-pound Tsohonis finished with 5 points on 1-of-9 shooting. He hit a 3-pointer in the fifth segment. He had one assist and one turnover.

Rhoades said Tsohonis had been battling a groin injury heading into Saturday.

“Marcus is more of a combo [guard],” Rhoades said. “But he can play the ball. You saw him handle it. Got in the lane a couple times.”

Nunn and Tsohonis were paired together on the Gold team for the final two segments, with Nunn continuing to play point guard and Tsohonis playing off the ball. Versatile 6-6 wing Vince Williams played point guard for the Black team during those segments.

Williams had a game-high four assists.

Williams led VCU with a 41.3% from 3-point range last season. He was VCU’s second-leading scorer, at 10.6 points per game. And his offensive acumen seems more critical now that VCU’s leading scorer last year, Bones Hyland, is now doing his scoring in the NBA — the 26th overall draft pick to the Nuggets in July.

On Saturday, Williams went 3 of 6 from 3-point range, part of his 15 points, which tied Hason Ward as the night’s second-highest scorer.

Back in public game action on Saturday, Curry showed the dazzling craftiness in driving to the rim for which he’s come to be known. He also slammed home a dunk in transition in the night’s sixth segment, which drew the crowd’s awe.

Curry went 7 of 11 for a game-high 16 points. He also had five rebounds and a pair of steals.

Ward shows off scoring touch: Ward, VCU’s high-flying, 6-9 forward, said this past week that he worked on finishing around the rim more this past offseason — particularly hook shots and floaters.

It showed in some of the successful shots he took Saturday. Ward worked with deft touch, tallying his 15 points on 7-of-12 shooting from the field. That included a 3-pointer, another thing Ward said he’s worked on.

“He can make plays because he’s so gifted as an athlete and has great length. And he has a good feel,” Rhoades said. “He’s just got to continue to learn the game. And as the game becomes easier to him, he’ll find easier, other ways to score.”

VCU’s KeShawn Curry shoots against Mikeal Brown-Jones in the Black and Gold Game, an annual basketball scrimmage, at the Siegel Center.