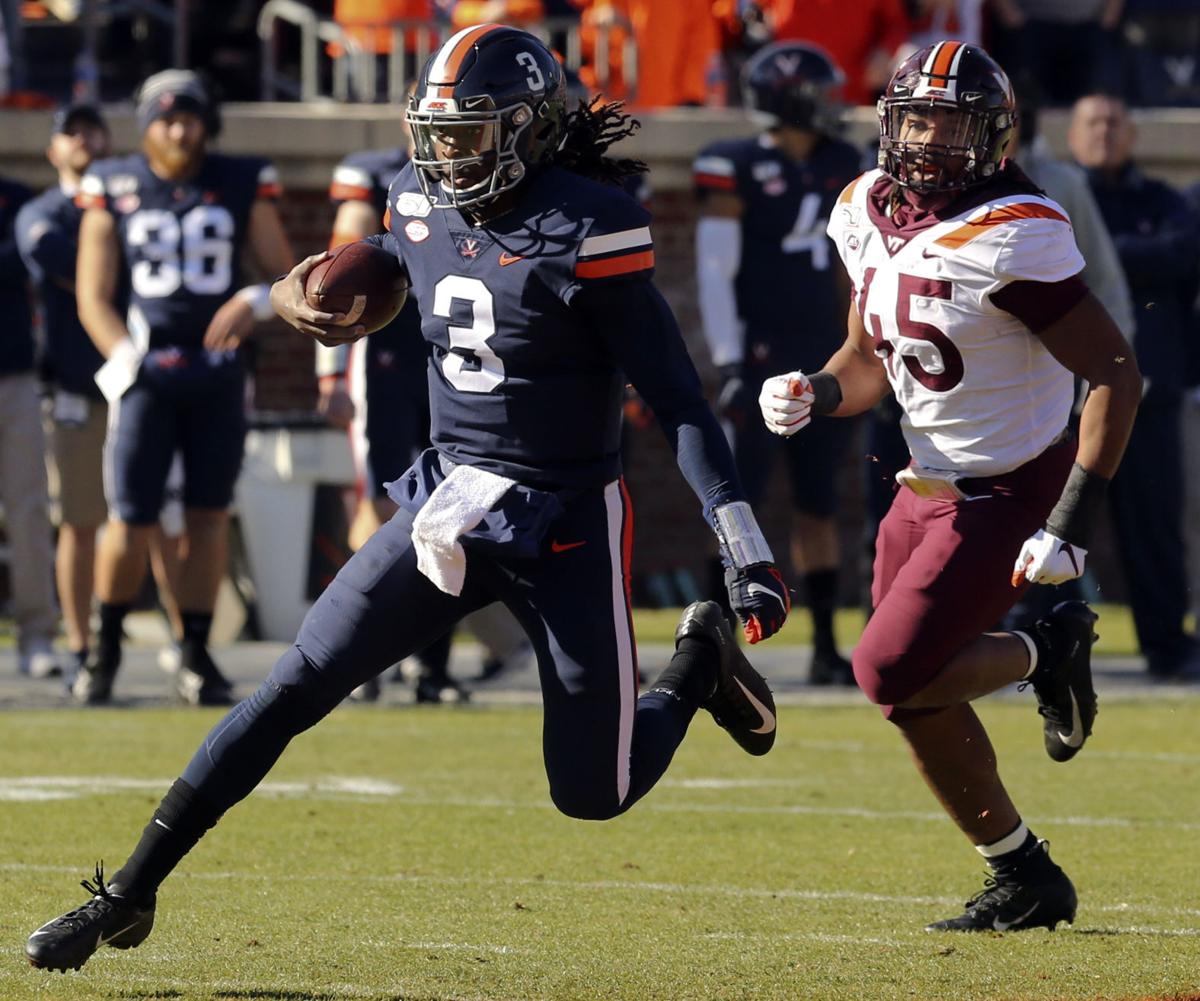 A year ago, a transcendent talent torched Virginia Tech’s defense for 475 total yards as UVA ended a 15-year losing streak in the teams’ annual rivalry game.

It would be hard to deny that Bryce Perkins was the difference in last season’s 39-30 Cavaliers’ victory. Virginia doesn’t have Perkins this year, but the Hokies are still bracing for a quarterback whose dual-threat abilities could determine Saturday night’s outcome.

“That kid can play,” said Tech senior defensive tackle Jarrod Hewitt. “You see him making plays outside of just the pocket or even making plays with his feet all the time.”

That kid is first-year UVA starter Brennan Armstrong, who is coming off back-to-back games where he posted more than 400 yards of total offense, becoming the first quarterback in program history to do that. He ranks fifth in the ACC in total offense this season.

The 6-foot-2, 215-pound left-hander from Ohio has the Cavaliers on a four-game winning streak. In his last game, a 43-32 win over Boston College, Armstrong scored on a 60-yard touchdown run. He threw for 287 yards and a score and ran for 130 and the long touchdown.

“He is a tough, country kid,” Anae said. “Going out to recruit him, man, me and coach [Jason] Beck, we’re taking country road here and country road there. I think just where he was raised and how he was raised, real hard working family, that’s who he is. He’s a tough, hardworking guy and I hope that’s showing in how he plays the game.”

That’s been evident to the Tech defenders as they’ve studied video of UVA’s offense and noticed Armstrong’s physical style of play.

“You’re going to get to know this guy won’t slide,” Hewitt said. “He wants the contact so you can kind of bring it to him a little bit.”

Louisville’s Malik Cunningham threw for 350 yards and three touchdowns and ran for 47 in a game the Hokies actually won 42-35 on Oct. 31.

Tech’s current four-game losing streak, however, started with a 38-35 non-conference loss to Liberty and quarterback Malik Willis. Willis threw for 217 yards and three scores and ran for another 108 yards and a touchdown.

The Hokies hope the lessons they learned in those games can help them Saturday night.

“We got to be disciplined to not run past the quarterback or not let them sit back there too long and extend plays,” said Tech defensive end Justus Reed. “Got to be gap sound and do our job and we’ll be all right.”

Last year in Charlottesville, the Hokies couldn’t handle Perkins, who scored on runs of 39 and 67 yards in the first quarter and finished with 164 yards rushing and 311 passing in leading UVA to its first win in the rivalry since 2003.

Now, Armstrong is hoping to be the first to quarterback the ‘Hoos to a win in Blacksburg since 1998.

“I’m at [my] perfect dream job. I told everybody, I was like, ‘Man, if I could be the video coordinator at VCU that’d be great. That’s the dream job.’”

VCU now sits at 100 regular-season Atlantic 10 victories — here are 10 of the most memorable:

Chase Coleman rarely sees the court for the Virginia men's basketball team, but the sophomore guard and aspiring coach still makes a major impact for the Cavaliers. “He’s always been another coach on the bench.”

CHARLOTTESVILLE — The ACC’s hottest team won’t get the chance to play another game until Saturday.