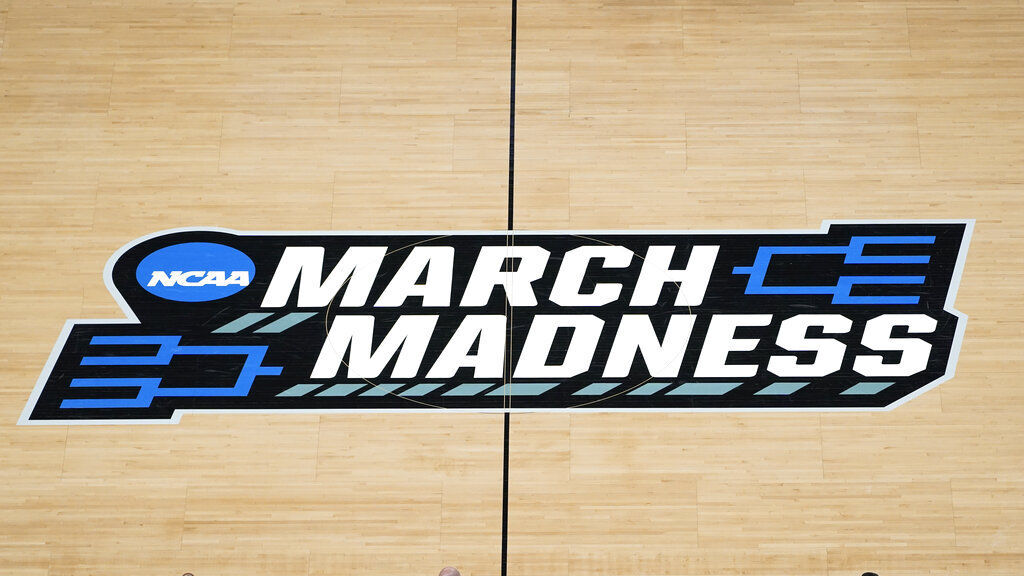 The March Madness logo is shown on the court during the first half of a men’s college basketball game in the first round of the NCAA tournament at Bankers Life Fieldhouse in Indianapolis, Saturday, March 20, 2021. The logo was not used for the NCAA women’s tournament. 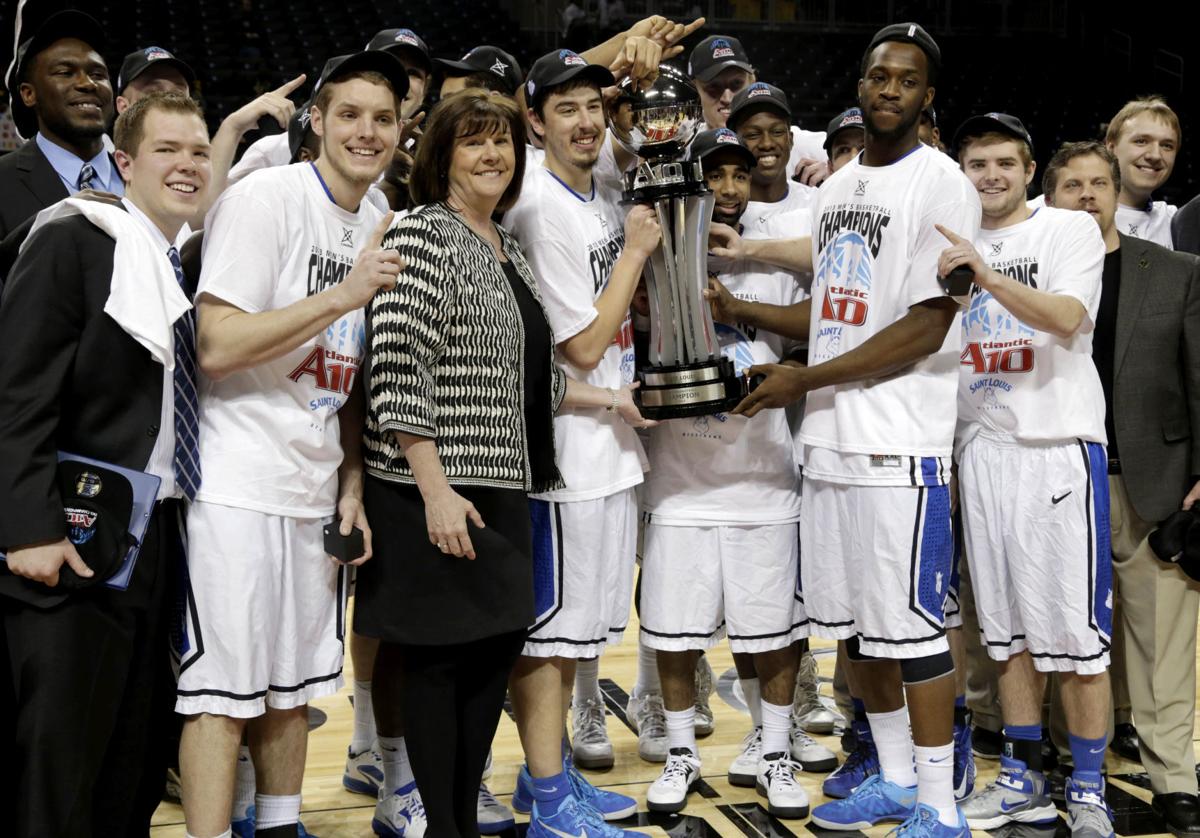 Atlantic 10 commissioner Bernadette McGlade posed with the Saint Louis men’s basketball team after it won the 2013 A-10 tournament title with a victory over VCU in the final. While men’s hoops draws top billing for many conferences, including the A-10, McGlade wants the NCAA to look into ways to properly support and promote the women’s game. 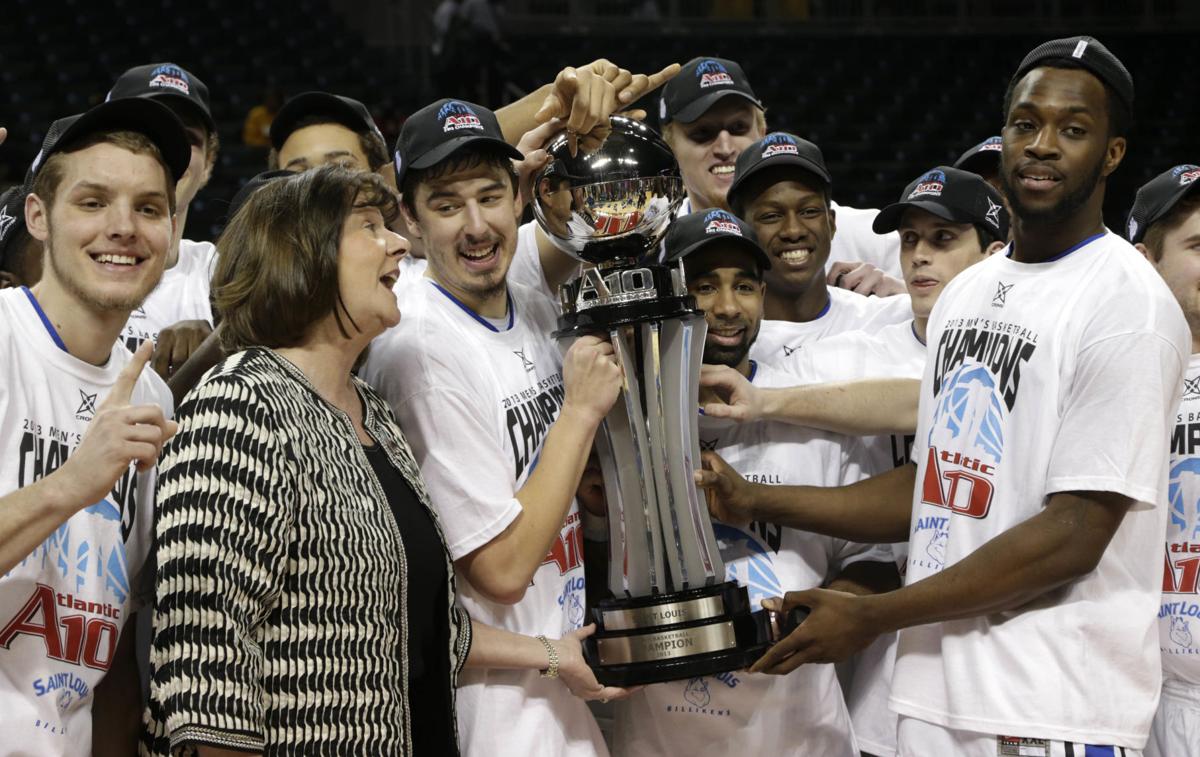 So the jarring disparities revealed last month between the NCAA men’s and women’s tournaments struck at her core.

But McGlade also is deeply invested in the men’s game. She leads a conference, the Atlantic 10, that annually earns multiple NCAA bids, and she just completed her third season on the Division I men’s basketball committee.

Several men, including ACC commissioner Jim Phillips, have served on both basketball committees. McGlade is the lone woman selected to both, and her frustration with inequities exposed during the women’s tournament is framed by a keen understanding of the sports’ contrasting market values and of the NCAA’s cumbersome governance structure.

“There were obviously issues that were inequitable and surfaced in a very public way, and there’s no getting around that, and they have to be addressed,” McGlade said during an interview at the A-10’s Newport News office. “And some of them were very unacceptable … and mistakes that shouldn’t have been made [by the NCAA]. Other [issues] are more systemic, and the onus for [resolving those] is on the [NCAA] membership.”

While NCAA staff worked tirelessly to stage the tournaments during a pandemic, they bungled athlete amenities. From the controlled-environment weight rooms to the courts of competition, the men’s in Indiana were top-shelf, the women’s in Texas apparent afterthoughts.

Not that the NCAA purposefully dismissed the women’s tournament. But the obvious failure of the respective event staffs to communicate effectively, if at all, is an indictment of the association’s internal workings and, ultimately, NCAA president Mark Emmert.

Even the simple matter of whether women’s college basketball can, or should, use “March Madness” branding caused confusion among NCAA brass.

“Wherever there was a breakdown in communication, I’m confident that will be addressed and remedied,” said McGlade, who spent four weeks inside the Indianapolis bubble created for the men’s tournament.

The NCAA has retained a New York law firm, Kaplan Hecker & Fink, to assess gender equity in all Division I, II and III championships, but the Women’s Basketball Coaches Association wants a voice in appointing a commission to examine the matter.

As a former player at North Carolina and coach at Georgia Tech, McGlade understands the anger of coaches such as South Carolina’s Dawn Staley and Georgia Tech’s Nell Fortner. Her subsequent administrative career informs her views on the macro topics confronting women’s college basketball.

Should the NCAA for the first time sell the television rights to the women’s tournament separately rather than bundle them with other championships such as baseball, softball and men’s and women’s lacrosse? The NCAA’s eight-year contract with CBS and Turner for the men’s basketball tournament is worth $8.8 billion. Signed three years ago and extending through 2024, ESPN’s deal to televise the women’s tournament and 23 other sports is worth $500 million, according to ESPN.

As it does for the men’s tournament, should the NCAA award conferences whose teams advance in the women’s bracket monetary units based on the television revenue? Moreover, to afford its corporate sponsors the opportunity to support both events at the highest level, should the NCAA stage the men’s and women’s Final Fours on separate weekends rather than simultaneously?

That’s how softball and baseball operate. Their championships are scheduled to conclude this year June 9 and June 30, respectively. The men’s and women’s soccer finals are traditionally separated by a week.

“There has to be very strategic thinking applied to these decisions,” McGlade said. “If there were easy, simple answers to any of these questions, we would all have them. We need to make some decisions that could be difficult but very meaningful to both tournaments.”

As a Georgia Tech associate athletic director in 1993, McGlade managed the school’s hosting of the Women’s Final Four, which was an advance sellout at the 15,811-seat Omni. In 2000 as an ACC associate commissioner, she chaired the women’s basketball selection committee, capping six years of service to the panel.

McGlade said that during her time on the committee, the group crafted a proposal to award monetary units based on tournament bids and advancement. The effort gained no traction.

“The [amount] was lower [than the men], but the principle was the same,” McGlade said. “There should be a unit distribution for teams that are participating in the NCAA women’s basketball championship … and be allocated on advancing through the bracket, just as the men, even though the value was less.

“From my perspective, I think that’s important. Equity can be different. You can treat programs equitably without it being exactly the same. … I think it’s an important topic now that it’s resurfaced again. Membership will have to make it happen. Mark Emmert at the NCAA doesn’t just wave a wand and say, ‘OK, we’re going to give a unit distribution to women’s basketball.’”

Based on the men’s tournament’s television contract, each unit, or game played, up to five games, is worth approximately $1.7 million, paid over six years, to a team’s conference. Whether or not the women’s basketball rights are unbundled, the unit amount would be far less.

“Even though it’s smaller, it’s still a significant value,” McGlade said. “There shouldn’t be a fear, or hesitancy, to assess value. It’s almost like the American way. … Financially, assessing a value goes a long way to continuing to grow a sport.”

McGlade was and remains a staunch proponent of putting the women’s tournament’s television rights on the market separately. ESPN’s broadcast for last Sunday’s championship game between Stanford and Arizona attracted 4.08 million viewers, according to Nielsen, a 9% bump from 2019.

Monday night’s Baylor-Gonzaga men’s final drew 16.9 million on CBS, a 14% dip from Virginia-Texas Tech in 2019, but still four times the audience as the women.

The March Madness logo is shown on the court during the first half of a men’s college basketball game in the first round of the NCAA tournament at Bankers Life Fieldhouse in Indianapolis, Saturday, March 20, 2021. The logo was not used for the NCAA women’s tournament.

Atlantic 10 commissioner Bernadette McGlade posed with the Saint Louis men’s basketball team after it won the 2013 A-10 tournament title with a victory over VCU in the final. While men’s hoops draws top billing for many conferences, including the A-10, McGlade wants the NCAA to look into ways to properly support and promote the women’s game. 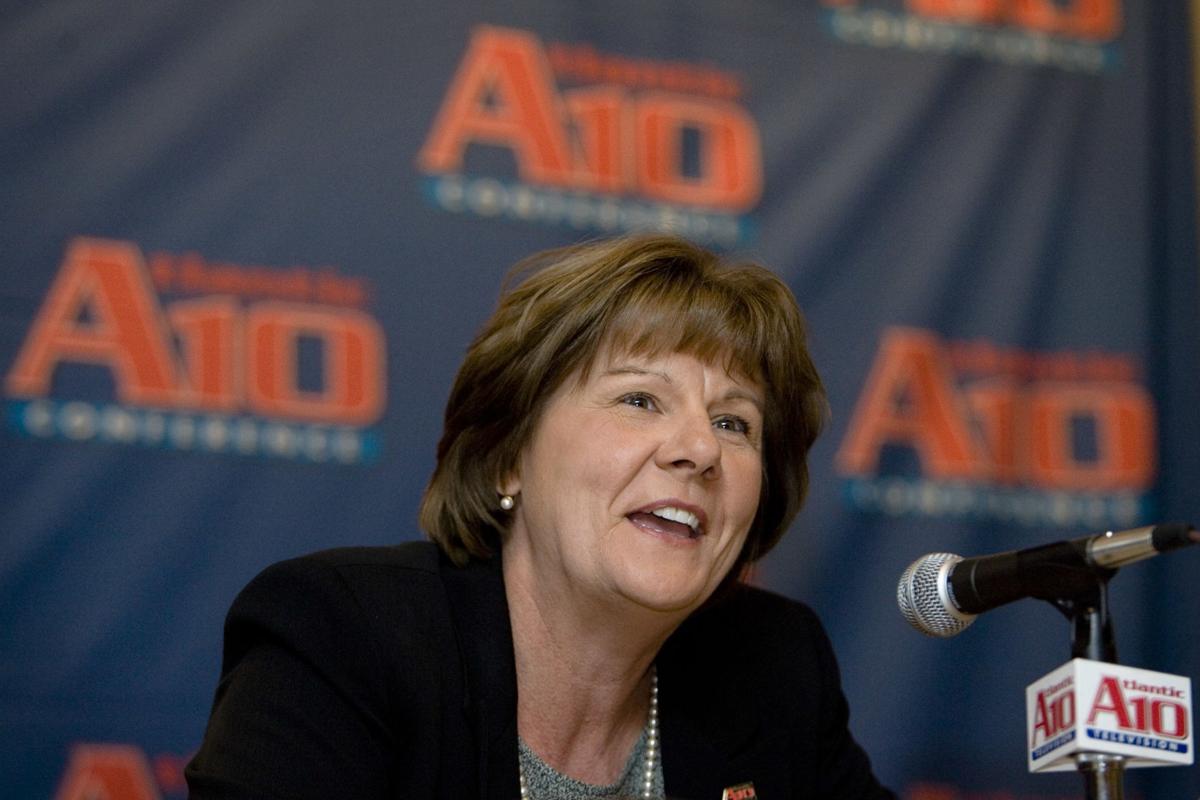 Bernadette McGlade said there were ‘unacceptable’ issues present at the women’s tournament. 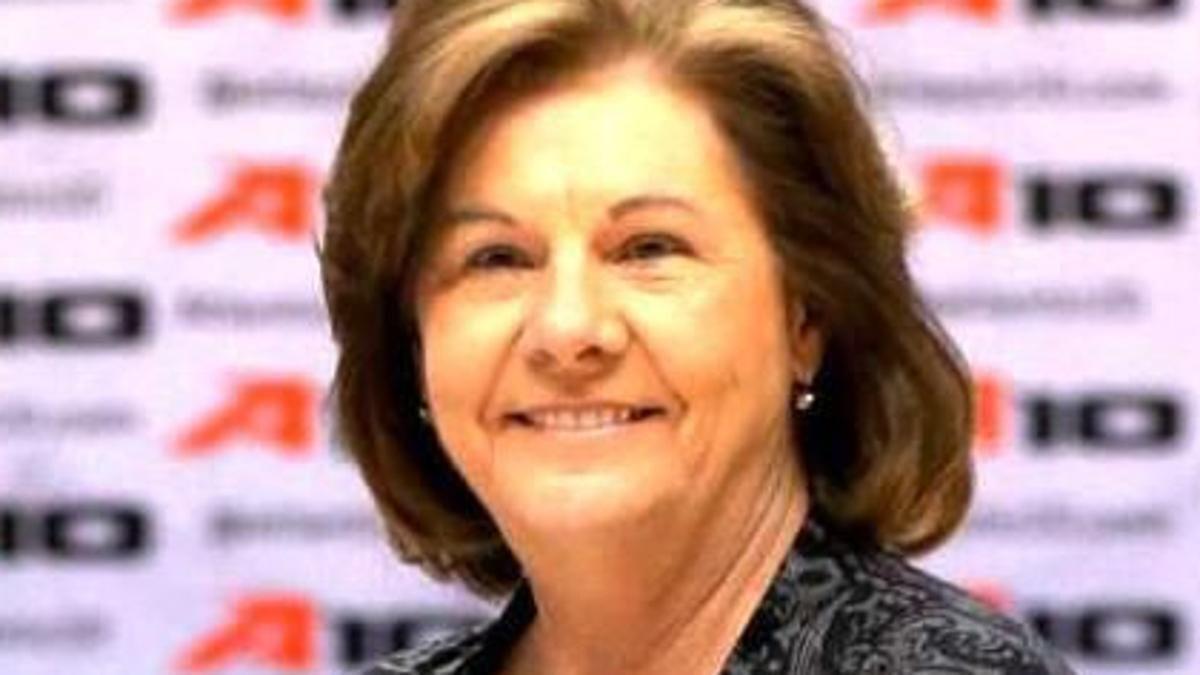