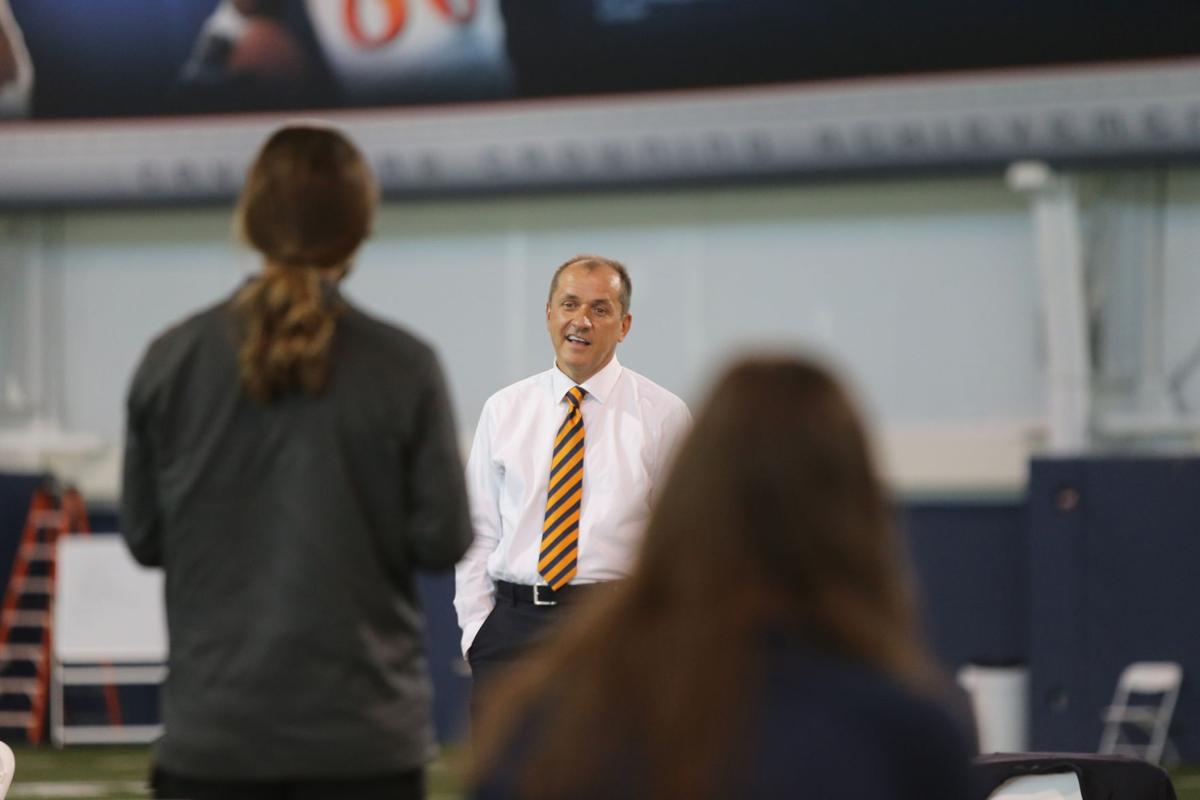 Jim Phillips, who began his tenure as ACC commissioner on Feb. 1, said he’s respectful of the conference’s history in Greensboro, N.C., but it “can’t just be the emotional tie” that gets in the way of what’s best for the league.

Confronting a question that has long simmered internally, one fraught with sentiment and politics, the Atlantic Coast Conference is formally exploring whether to move from its original home of Greensboro, N.C., the Richmond Times-Dispatch has learned.

That appraisal is part of what new ACC commissioner Jim Phillips calls “a holistic and transparent review” of the league’s structure, which the conference has outsourced to a pair of consulting groups.

“If you’re going to do an assessment, I have a responsibility to do it in a complete manner,” Phillips said in an exclusive interview, “and it wouldn’t be complete unless we looked at [potential relocation] as well. … Greensboro has been amazing. I’ve loved it. The community’s fantastic, the office is great, the location of the office is great.

“But … it can’t just be the emotional tie. It has to make a lot of sense.”

On Feb. 1, Phillips succeeded the longest-tenured commissioner (24 years) in ACC history, John Swofford. He is the first of the conference’s five commissioners not to have a direct ACC connection — he worked at league member Notre Dame when the Fighting Irish competed in the Big East.

But Phillips quickly immersed himself in a history lesson that dates to the conference’s 1953 founding in Greensboro. He also learned that a possible move has been discussed in ACC circles for years, especially among more recent members geographically and emotionally removed from the league’s roots.

Comprising conference’s presidents and chancellors, the ACC’s board of directors encouraged Phillips to undertake this comprehensive review.

“We wanted to provide the new commissioner with the resources necessary to think carefully whether the conference is built to succeed,” said Duke president Vincent Price, who chairs the board of directors.

Regarding a possible move, Price said: “I will say as a resident of North Carolina [that] I have my own personal views about the desirability of recognizing that traditional heart of the conference being here in this region, and I know that certainly will be among the factors we consider. … [But] I enter this decision about the conference review with an open mind, and I think all of us approach it this way.”

Greensboro Mayor Nancy Vaughan understands the city’s affection for the ACC like few others. Her father, the late Fred Barakat, was the conference’s associate commissioner for men’s basketball and managed the league tournament for 16 years until his 2007 retirement.

“Through [Barakat’s] passion and advocacy, as a family we are just totally in on the ACC and all the teams,” Vaughan said. “I’ve been wearing ACC gear since 1989. It is definitely something I feel strongly attached to, not only as mayor, but as a fan and family member. …

“I really appreciate that Commissioner Phillips has been completely transparent during this process. … Obviously the ACC is very important to the city of Greensboro and Guilford County. The ACC has grown and thrived here since 1953 and can continue to grow and thrive in our community.”

Since the ACC rarely hosts league meetings in Greensboro — pre-COVID, annual fall gatherings rotated among the 15 campuses, with winter and spring meetings in Florida — its calculation will center on business rather than accessibility.

Phillips said the ACC would evaluate options only if Newmark recommends a move and that the final decision rests with the league’s membership.

The most mentioned alternative is Charlotte, about 90 miles southwest of Greensboro and home to the conference’s football championship game and annual preseason football gathering. Charlotte occasionally hosts the ACC men’s basketball tournament and houses an ESPN studio complex.

Other options could include the largest markets in the ACC footprint: New York, Boston, Washington, D.C., and Atlanta.

“This is a review of Greensboro,” Phillips said. “This isn’t, hey, let’s go play footsie with somebody else. … I have not talked to one [other] city, not one. … I have not wanted to taint the process. … It’s too important to too many people to do anything less.”

A former athletic director at Northern Illinois and Northwestern, Phillips conducted initial evaluations at both of those schools, absent the relocation piece. But although new CEOs often assess the enterprise, Phillips understands the sensitivities for legions, including his staff and their families.

“The location thing is hard,” he said. “It’s hard. It’s just really hard. I know what May 8, 1953, means. I know what it means at Sedgefield Country Club, and I know the history of Greensboro and the ACC.”

Thanks in large measure to the city’s ACC connection, Greensboro Coliseum hosted 63 NCAA Division I men’s basketball tournament games from 1974-2012, third-most of any arena during that span. The NCAA has since awarded first- and second-round games to Greensboro for 2023.

Opened in 2011, the ACC’s Hall of Champions museum resides in the coliseum complex.

“We always want to be in the mix, no matter what happens, for [ACC] tournament play,” Vaughan said. “I think we have some of the best facilities in the country, and our staff puts on a great tournament, no matter what the [sport] is, and it’s all about the ACC. …

“We have invested in facilities specifically that would lead to more tournaments, more functions. We’ve got the largest aquatic center in the country right now. I’d say it’s the best. We’ve got a premier coliseum, we’ve got wonderful baseball and golf facilities.”

Vaughan said she is scheduled to meet with Newmark officials in early September and will enlist other civic and business leaders to help present Greensboro’s case.

“Newmark won’t be familiar with Greensboro and Guilford County,” Vaughan said, “and I think it’s important for them to realize that we are not a small town.”

The ACC has changed Greensboro addresses several times, always in cramped spaces until moving to its current office, near the Grandover Resort, in 1997. The conference owns the 18,500-square foot building, which Guilford County appraises for $2,755,100.

The late Gene Corrigan served as commissioner from 1987-97 and took over a headquarters on Battleground Avenue. His son Boo, North Carolina State’s athletic director, applauded Greensboro but wants “whatever is best for the conference.”

“It’s really a tribute to Jim’s style,” Corrigan said. “He’s done a great job with being inclusive and, quite frankly, having hard conversations, telling people, ‘Here’s where we are, and here’s our thought-out approach as to what we’re going to do.’

“So many things have changed since Commissioner Swofford took over [in 1997]. So it’s probably a good thing to go through a full review, and the best time to do that is on your way in the door.”

Before starting the review, Phillips informed his staff of approximately 50. Then he connected with Vaughan, followed by athletic directors, senior women’s administrators and athletic faculty representatives at member schools.

In a lengthy email to the membership obtained by The Times-Dispatch, Phillips wrote of a “fiduciary responsibility to ensure that remaining headquartered in Greensboro is what is in the best long-term interests of the conference and of our 15 member institutions.”

“He knows it’s unsettling for the staff,” said North Carolina athletic director Bubba Cunningham, the 2021-22 chairman of the league’s ADs. “He’s been very complimentary of, and open with, the staff. But I think the reality of 15 schools, many of them from the Big East, they don’t quite understand or appreciate the history of the league, the founding of it in Greensboro, and so, he owes it to them to explore. Now, I’m very biased in what I hope the outcome is, [staying in Greensboro], but I think it’s a fair thing to do for the membership.”

The ACC’s potential move spilled into public view Aug. 12 at a breakfast sponsored by the Wyndham Championship golf tournament — the PGA Tour event was played at Sedgefield that week — and attended by Phillips, Swofford and their wives. The event’s emcee, High Point University president Nido Qubein, good-naturedly asked Phillips to take a solemn vow not to relocate the conference.

Phillips deftly side-stepped the matter, according to sources at the breakfast.

“Transparency matters,” Phillips said in the interview. “No predetermined outcomes. … I owe that to my staff. I owe it to the membership. I owe it to the city on the location piece. … So there have been no secrets, and nobody’s been surprised about any of it. …

“It’s not pleasant or easy. But it’s a responsibility of the new commissioner, and I can’t walk away from that.”

Jim Phillips, who began his tenure as ACC commissioner on Feb. 1, said he’s respectful of the conference’s history in Greensboro, N.C., but it “can’t just be the emotional tie” that gets in the way of what’s best for the league. 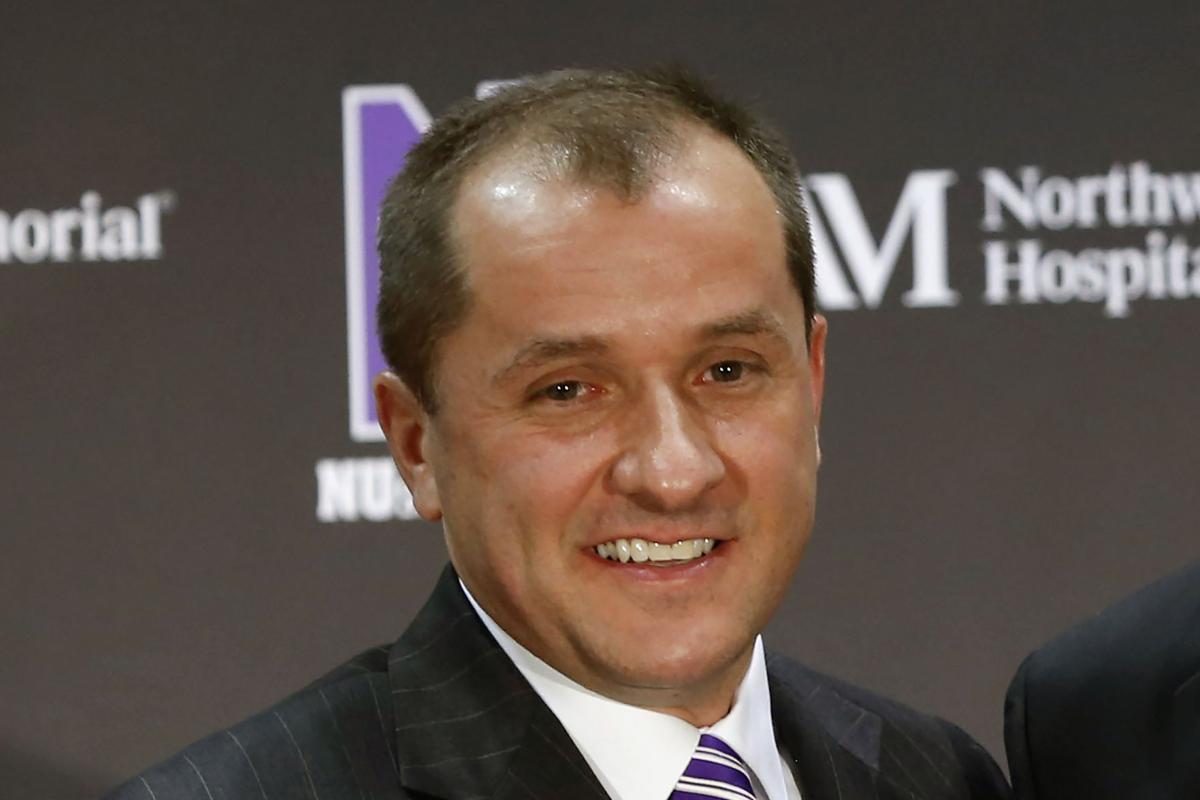 Jim Phillips says the ACC has not talked to other cities, but the process is a ‘review’ of Greensboro.