Little brother was fed up. Fed up with his big brother’s popularity and wealth. Fed up with the daily fawning of legions, including — you can’t make this up — the president of the United States.

Little brother had a case. He is popular, too, and hardly a pauper.

Yet, only six months removed from the most painful chapter of his life, no one seemed to care. Oh, there were the requisite sympathy cards in mid-March. But folks quickly moved on, fixated yet again on big brother.

So little brother decided to command some attention, and he knew just how to do it: Invite everyone to the most lavish party imaginable.

Such is the intent of the ACC’s men’s basketball coaches. They want to stage an all-inclusive NCAA tournament in 2021, and Wednesday afternoon, exhausted by our collective preoccupation with football, they began selling their vision on social media.

Many of their motives are noble, but the logistical, financial and medical hurdles seem insurmountable. Sure enough, less than 24 hours after the ACC coaches, Virginia’s Tony Bennett and Virginia Tech’s Mike Young included, began campaigning, the NCAA all but torpedoed the idea.

“While all who care about the game are entitled to their opinion, and we’ll always respectfully listen, at this time we are not working on any contingency plan that involves expanding the tournament field,” Dan Gavitt, the NCAA’s senior vice president for basketball, said in a statement Thursday morning.

College basketball lost March Madness to COVID-19 last winter, a void felt by not only athletes and coaches but also fans. So why not make the event’s return, virus permitting, like no other? Why not give every team — cliché alert — its “One Shining Moment?”

Notre Dame coach Mike Brey captured that sentiment brilliantly with a tweet from his South Bend, Ind., campus that invoked the source for the classic hoops movie “Hoosiers.”

“Indiana is home to the ‘Milan Miracle’ — an example of a pure basketball tournament where everyone got a shot at the title,” Brey wrote. “I can’t think of a better time, with the possible limits on nonconference competition this season, to use the ‘Milan Miracle’ as an inspiration to level the playing field.”

Brey is right. The pandemic may curtail, even eliminate, nonconference games this season. And without that data, the NCAA tournament selection committee’s task would become exponentially more difficult.

As Duke coach Mike Krzyzewski’s statement said, in part: “This is not a regular season. This is clearly an irregular season that will require something different.”

Krzyzewski and Brey, indeed the entire college basketball community, have watched major college football, the economic engine of all Power Five conference sports, splinter from the pandemic’s pressures. They lament the aimless leadership and are determined to avoid the same mistakes.

Moreover, they see a college sports world — I plead guilty — obsessed with football. They see President Donald Trump, stumping for votes in swing states such as Pennsylvania, Michigan, Ohio and Wisconsin, pressuring the Big Ten to reconsider its decision not to play this fall.

The ACC coaches wanted to remind folks that while football owns the fall and early winter, college basketball takes over in mid-January.

Fans swoon during postseason, and the NCAA tournament is a true national endeavor, home to the most treasured bracket in sports.

And though not as lucrative as college football, the NCAA tournament’s television deal with CBS and Turner is not for chump change. The current contract runs through 2024 and is worth $11 billion for 14 years; an eight-season extension from 2025-32 is valued at $8.8 billion.

But a tournament with all 346 eligible teams, more than five times the current 68, would be far more expensive to stage, this during an economic crisis. That crisis also would preclude a corresponding TV revenue bump, and the expanded event would expose thousands more to potential virus infection.

Finally, what about conference tournaments, which, by the way, are essentially the early rounds of the NCAA tournament? Would the league events vanish for a season? Would the conferences be able to escape contracts with arenas and hotels without considerable penalty?

The ACC coaches didn’t address details. They floated a concept and, as they hoped, created headlines and dialogue about college basketball.

Next week, the NCAA Division I Council is expected to approve a Nov. 25 tip-off for the basketball season, a two-week delay from the traditional start. Can Little Brother pull off an abbreviated schedule and a complete, 68-team NCAA tournament without a hitch?

We should be so lucky.

Teel: A seemingly inevitable outbreak struck Blacksburg. What's next for the Hokies and Cavs?

College football’s 2020 scheduling chaos, long anticipated and unlikely to abate, has broadsided the commonwealth before Virginia Tech or Virg…

Notre Dame coach Mike Brey (center) likened the idea of an all-inclusive NCAA tournament to the Milan Miracle, the inspiration for the movie “Hoosiers.” The small high school won a similarly structured tourney in Indiana. 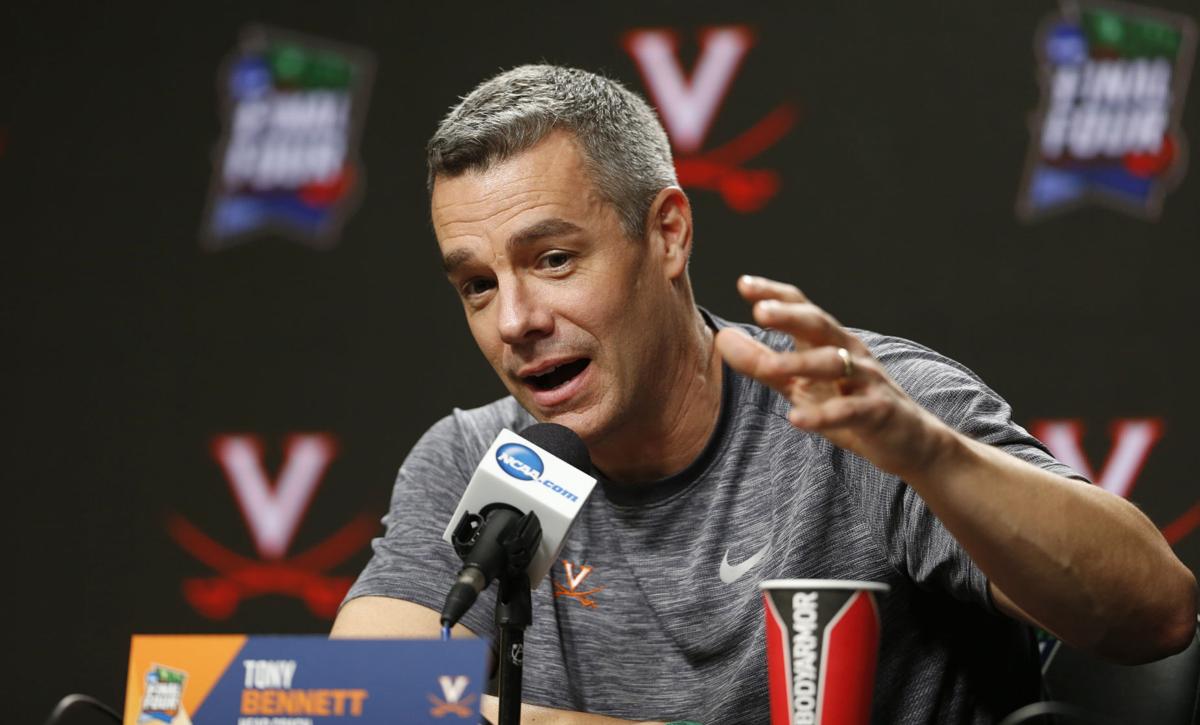