Teel: As he did at Richmond, Dave Clawson defying odds at Wake Forest
0 Comments
Share this
1 of 2 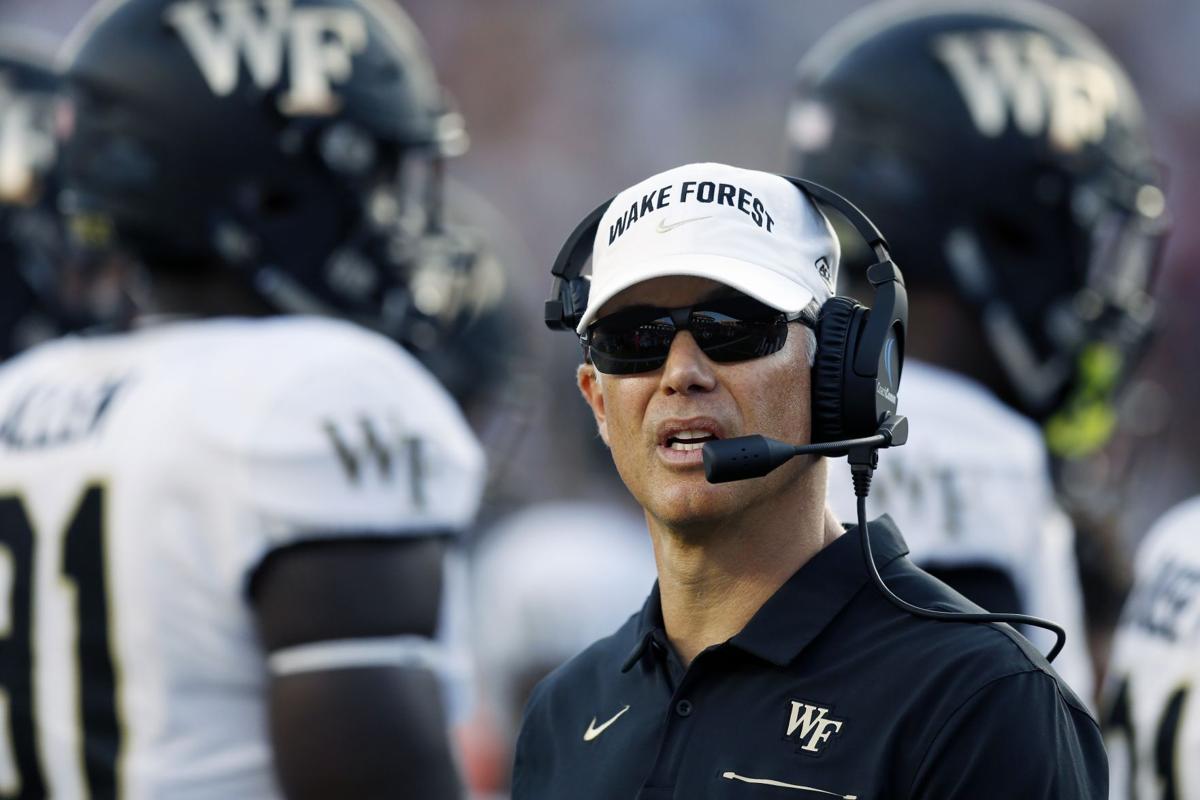 Wake Forest head coach Dave Clawson stands on the field during a timeout in the second half of an NCAA college football game against Boston College in Boston, Saturday, Sept. 28, 2019. (AP Photo/Michael Dwyer) 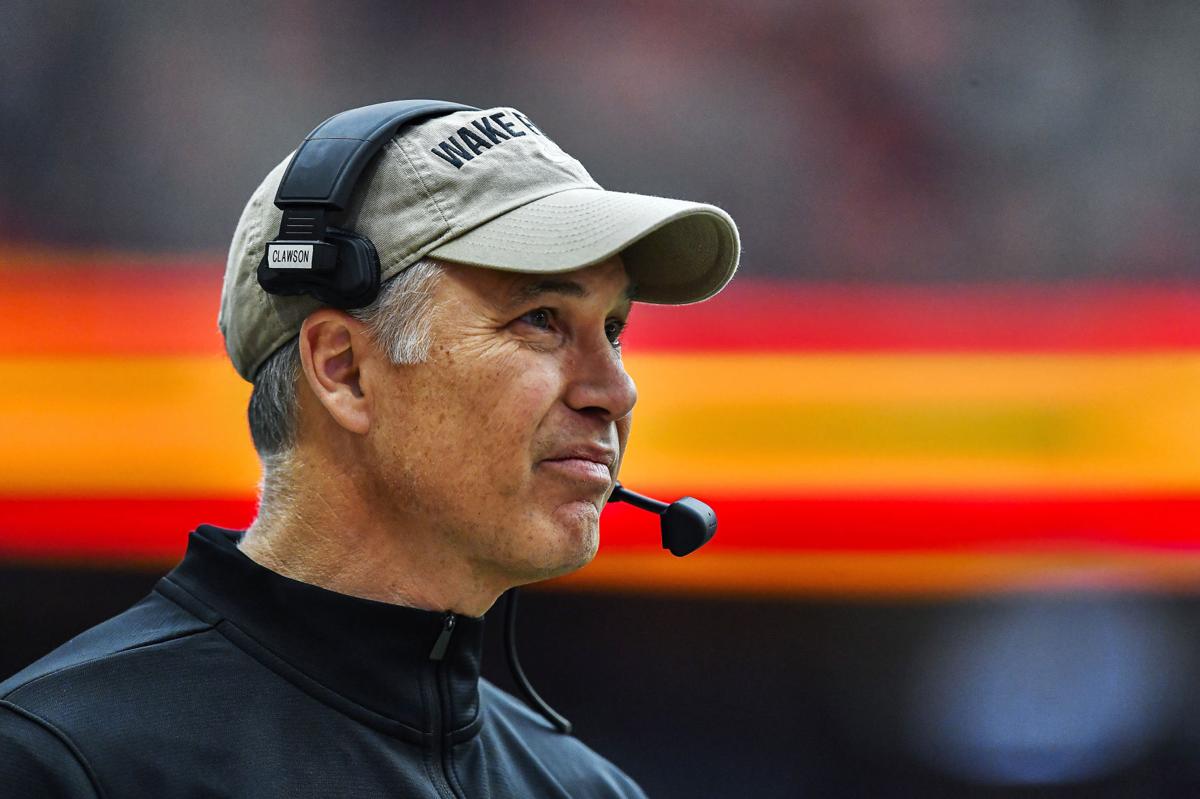 Wake Forest coach Dave Clawson has applied effective recruiting and frequent redshirting to put together a deep, talented and experienced team. His offense averages 38.4 points per game, No. 15 nationally and No. 2 in the ACC.

One ACC football team is undefeated. One is on pace to average more than 30 points a game for the fifth consecutive year, and one has forced double-digit turnovers this season.

If you’re surprised, you haven’t been paying close enough attention to Dave Clawson’s coaching tenure at the Power Five’s smallest school, as measured by undergraduate enrollment. Indeed, Clawson’s success at Fordham and Richmond foreshadowed much of what he has accomplished since accepting the Wake Forest job in December 2013.

He steered the Rams to their first Championship Subdivision playoff appearance in 2002, the Spiders to their first playoff semifinal five years later. Similar to Wake Forest, Fordham and Richmond are selective private institutions with limited resources for athletics.

The Richmond-Wake Forest comparison resonates most to Clawson because both compete in conferences with larger public schools that spend more on football, James Madison and Delaware in the Colonial Athletic Association, Clemson, Florida State and many others in the ACC.

Rather than run from academic standards and fiscal sanity, Clawson embraces them.

“I viewed it as an opportunity, that this is our best chance to win,” he said. “Let’s celebrate it and let’s promote it and have all those things be the reason we do win and not the excuse of why we can’t win.”

Win the Deacons (5-0, 3-0 ACC) have — this will be their sixth consecutive bowl season. The goal now is to exceed Clawson’s earlier teams, to elevate Wake Forest into the final top 25 for only the fifth time in program history and to reach the ACC championship game for the second time.

Don’t bet against them.

Through effective recruiting and frequent redshirting, Clawson and his staff have built a talented, experienced and deep squad. Nine players accepting the extra year of eligibility granted by the NCAA because of the pandemic bolstered the roster even further.

Among those super seniors are three of Wake Forest’s top four tacklers: linebacker Luke Masterson, rover Traveon Redd and cornerback Ja’Sir Taylor. The offense is stocked well enough to have thrived despite the transfer of running back Kenneth Walker (team-high 13 touchdowns in 2020) to Michigan State and a season-ending injury to receiver Donovan Greene (ACC-best 20.1 yards per catch last year).

Protected by a seasoned line led by tackle Zach Tom, Sam Hartman has thrown 11 touchdown passes and only two interceptions. Running backs Christian Beal-Smith, Justice Ellison and Christian Turner are interchangeable, Nick Sciba is on pace to become the most accurate kicker in NCAA history, while Jacquarii Roberson, A.T. Perry and Taylor Morin give Hartman plenty of targets.

“That’s one thing I’ve been impressed [with] over the years, how they’ve been able to continue [to recruit] good receivers,” Louisville coach Scott Satterfield said prior to facing the Deacons last week. “... I remember two years ago we went down there and they had some outstanding receivers that we couldn’t really cover, and they still have some great ones this year.”

Five days later, Roberson and Morin combined for 12 catches and 257 yards in a 37-34 victory over the Cardinals.

The Deacons average 38.4 points per game, which ranks 15th nationally and second in the ACC. Wake and Clemson are the only ACC programs to average at least 30 points in each of the previous four seasons, and the Tigers’ streak appears destined to end this year.

Few would peg the Deacons as the conference’s most consistent offense over such an extended stretch, but coordinator Warren Ruggiero, who accompanied Clawson to Wake from Bowling Green, has installed a system based on run-pass-option concepts.

“One of the hardest things to do as a defensive lineman is, in play-action, to transition from playing run to pass,” Clawson said. “So what the RPO thing did was it really slowed down pass rushes. It made defensive linemen play run before pass. ...

“Warren’s a brilliant, brilliant offensive mind, and he’s very creative, and he kind of based our entire offensive system — the RPO stopped becoming a complementary play and it became the bread and butter of what we did. We run inside zone, outside zone, counter, power, tackle wrap. We run all the traditional plays that other people run, but we run them with an RPO. ... I think Wake Forest is a place where you’ve got to be a little unconventional.”

Financial support has allowed Wake Forest to not only retain coaches such as Ruggiero but also upgrade facilities that Clawson said were worse than he had at Bowling Green. Clawson credits those investments with helping him sustain success longer than any Deacons coach since the ACC’s 1953 formation.

What Clawson’s Wake program has yet to do is have a winning ACC season, finish among The Associated Press’ Top 25 or reach the conference title game. The Deacons did all three in 2006 under Jim Grobe, winning the program’s second ACC championship and first in 36 years, starting a three-year, 28-12 run.

This marks the fourth time in six seasons that Wake has started at least 4-0 and the second time in three years they’ve opened 5-0. So no one in the Deacons’ locker room is surprised.

The most encouraging start was in 2019, when 7-1 Wake Forest was 19th in the initial College Football Playoff rankings. But a 36-17 loss at Virginia Tech the next week started a 1-4, season-ending slide.

“We got some injuries,” Clawson said, “but I also think we lost our way. ... I think [success] got to our heads a little bit. I don’t know if we prepared as well. I think there was some selfishness on that team. ... We certainly didn’t finish that year the way we should have. ... This group saw what happened.

“I think this year’s team has a chance to be much more balanced, that we don’t have to score 40 or 50 points every week to win. And our players know that. They know we’re better.”

How much better likely will depend on games such as Saturday’s against Louisville. The teams were tied four times, twice in the fourth quarter, before Sciba’s 29-yard, last-minute field goal.

“I’d say we’re a resilient football team,” Morin said at a postgame news conference. “... We’ve got a lot of fifth- and six-year guys, and it comes from them. They set the tone, and we all follow along.”

The victory elevated the Deacons to 19th in this week’s AP poll. They haven’t cracked the top 15 since 2006 and have never been ranked among the top 10.

“The sun is never going to rise and set at Wake Forest University on Wake Forest football,” Clawson said, “and I get that, but I also view this as something where we’re really enhancing the university.”

Wake Forest head coach Dave Clawson stands on the field during a timeout in the second half of an NCAA college football game against Boston College in Boston, Saturday, Sept. 28, 2019. (AP Photo/Michael Dwyer)

Wake Forest coach Dave Clawson has applied effective recruiting and frequent redshirting to put together a deep, talented and experienced team. His offense averages 38.4 points per game, No. 15 nationally and No. 2 in the ACC. 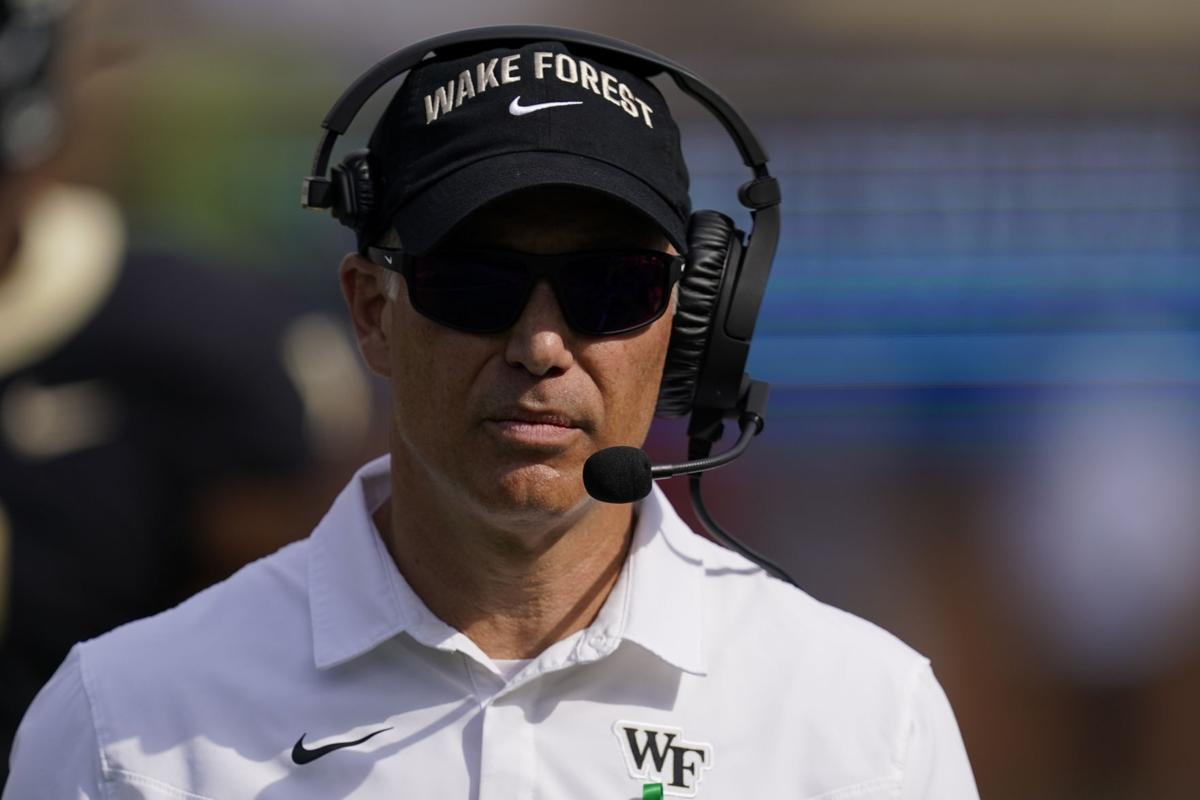 Wake Forest coach Dave Clawson has led the Demon Deacons to a 5-0 record and a No. 19 ranking nationally.