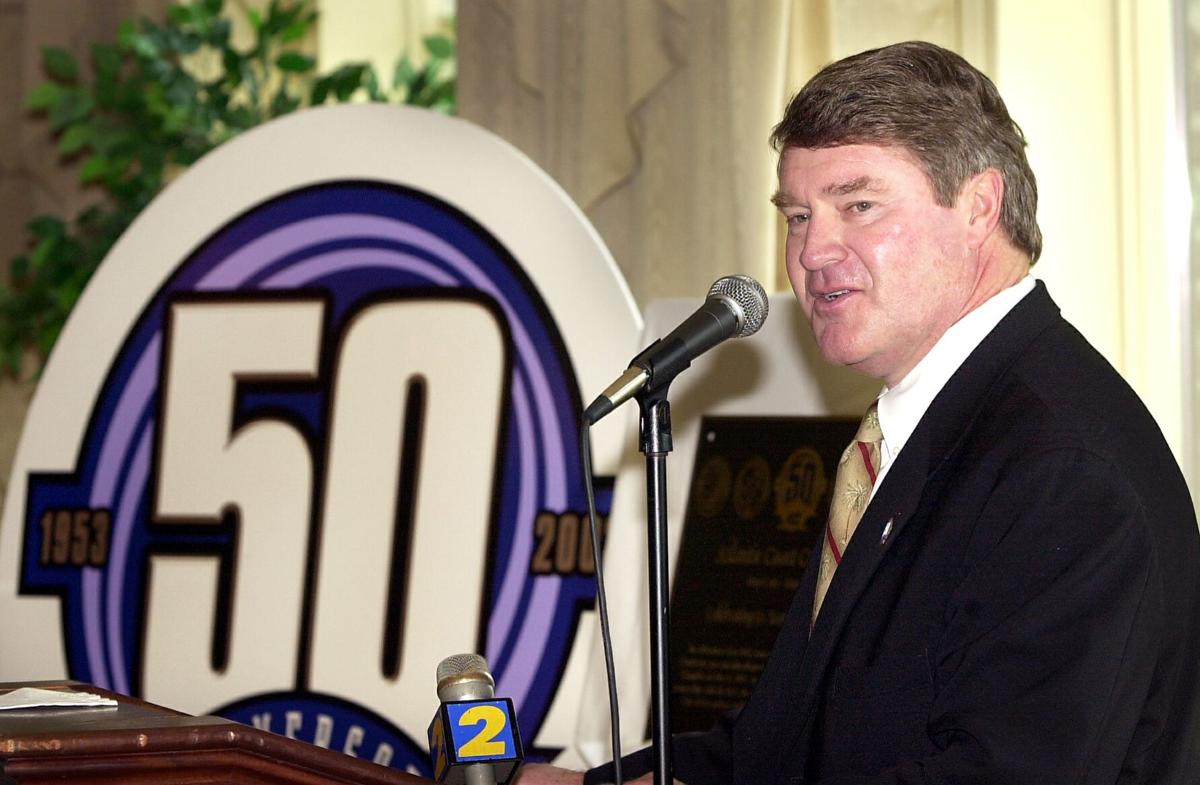 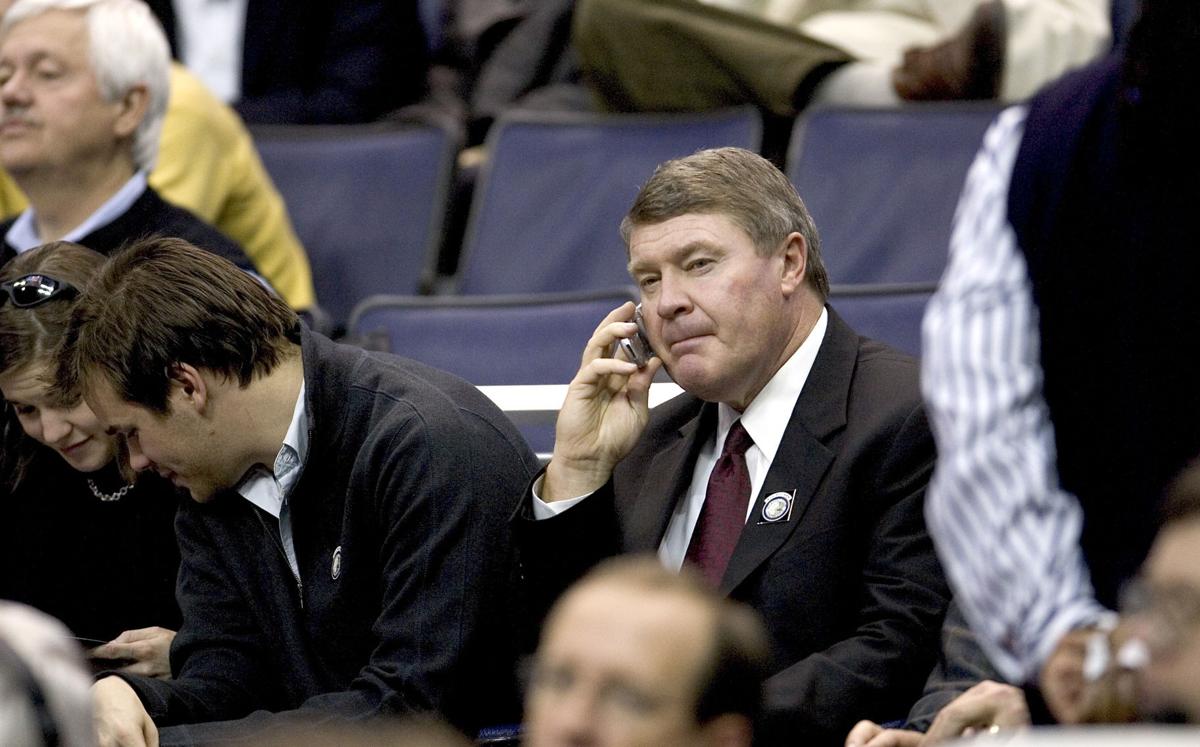 As Atlantic Coast Conference commissioner, John Swofford was among the founding fathers of the College Football Playoff and persuaded ESPN to become a partner in the ACC Network. Swofford led the conference through realignments and expansion from nine to 15 schools. 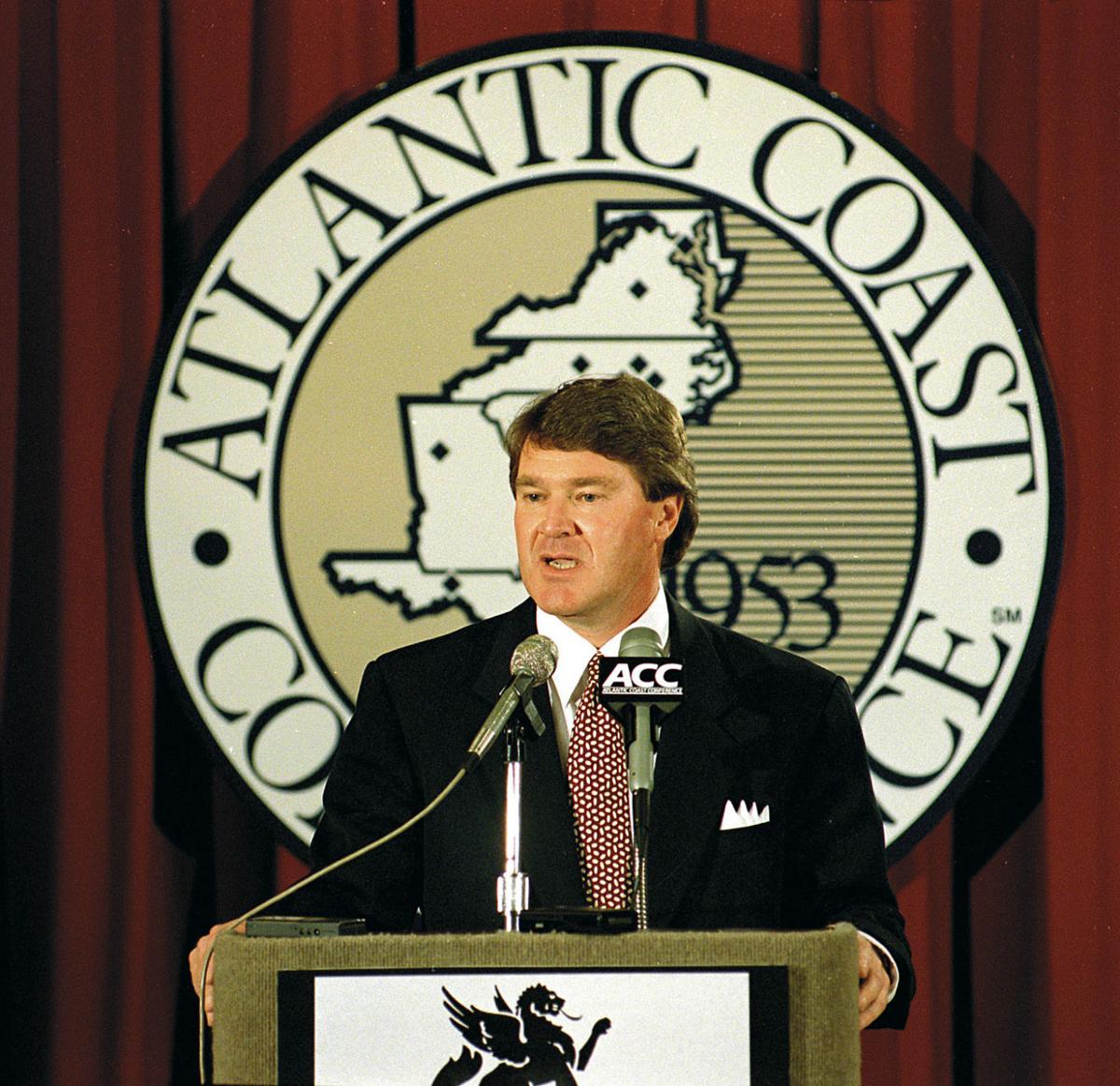 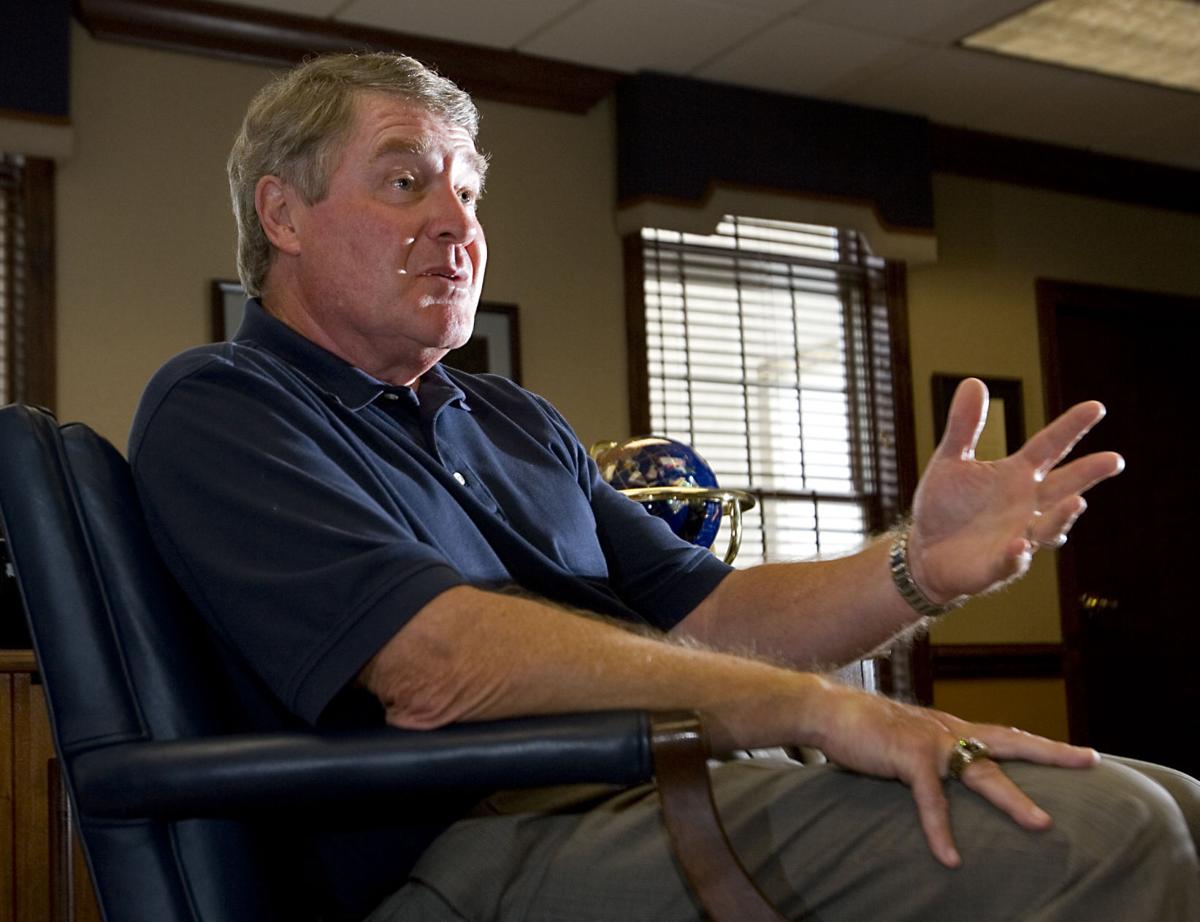 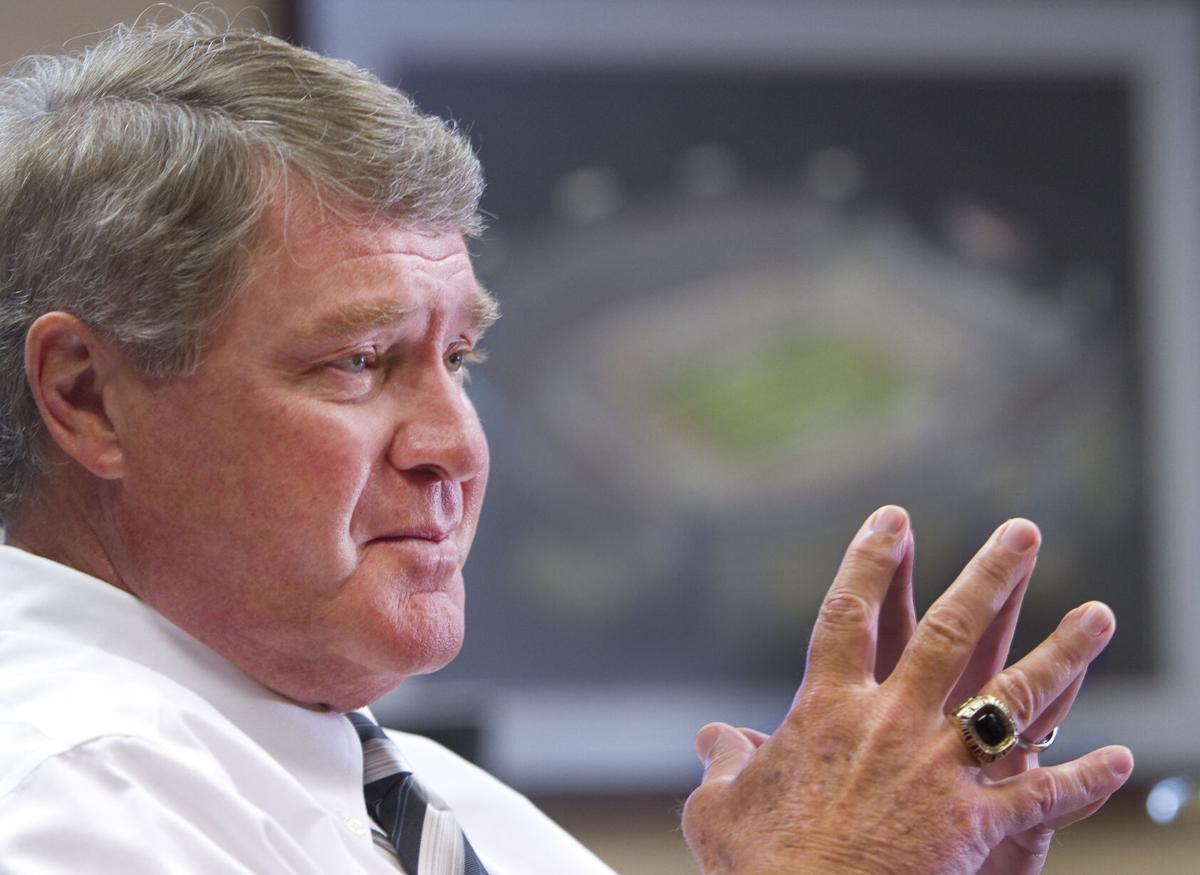 ACC commissioner John Swofford is ending a 48-year career in college athletics administration on Monday. He guided the conference through major changes during almost 24 years as its leader. 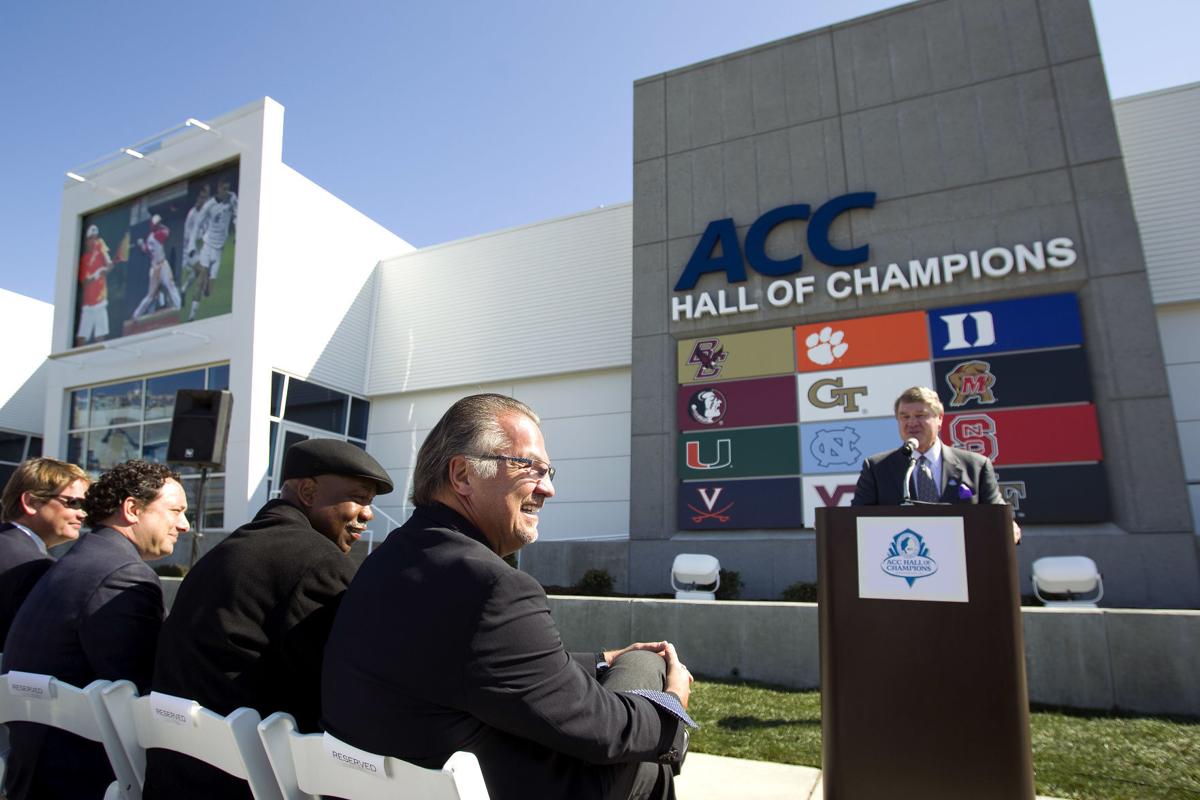 ACC Commissioner John Swofford speaks at the lectern before the ribbon cutting ceremony for the ACC Hall of Champions on Wednesday, March 2, 2011, in Greensboro, NC, at the Greensboro Coliseum. Dick Grubar (left), an original member of the ACC Hall of Champions Advisory Commission, was also in attendance. (names and location CQ by jw) (Jerry Wolford, news-record.com) 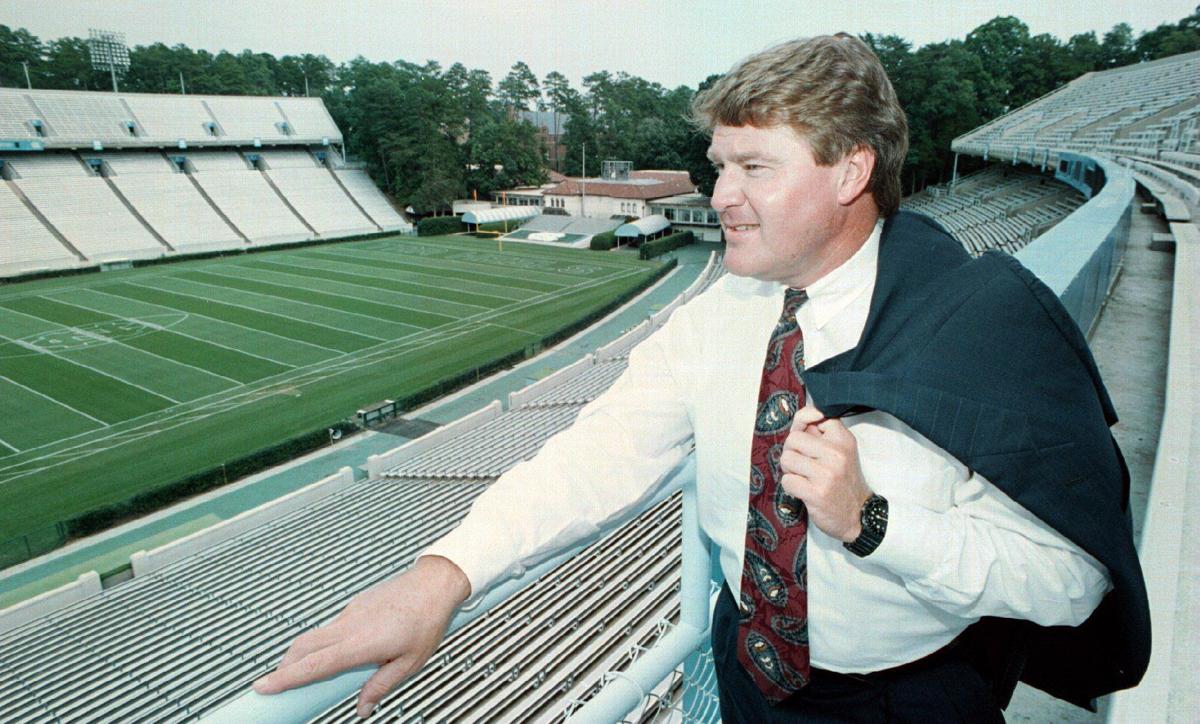 As the 2019 Final Four convened in Minneapolis, ACC commissioner John Swofford was at the peak of his influence in the college sports enterprise.

The conference was three months removed from Clemson’s second national football championship in three years. Virginia was poised to win the league’s third NCAA basketball title in five seasons, and the ACC Network was preparing for an August launch.

On the eve of UVA’s championship game against Texas Tech, and with so much to celebrate, Swofford and his wife, Nora, joined friends and colleagues for dinner at a downtown restaurant. My wife, our daughter and I also were waiting for a table.

Swofford strolled over, and I before I could finish with introductions, he was crouched low, talking to 7-year-old Laura and accepting her hug as if she were his own.

His professional status aside, he’s never abandoned the personal touch and small-town values rooted in his modest upbringing in North Wilkesboro, N.C. Indeed, those qualities define a remarkable 48-year career in college athletics administration that closes Monday as he transitions into retirement and turns over commissioner duties to former Northwestern athletics director Jim Phillips.

“You think of a commissioner’s office being a lofty thing you can’t touch,” said South Florida AD Michael Kelly, a former senior associate commissioner for football at the ACC. “But … people would be surprised at how approachable he really is. I don’t know if I’ve ever seen anyone better in a one-on-one setting than John.”

Swofford, 72, led the ACC for nearly 24 years, the longest and most transformative tenure in league history. He shepherded the conference through multiple rounds of realignment, growing membership from nine to 15 schools, was a founding father of the College Football Playoff and persuaded ESPN to partner in the ACC Network.

Such seismic change doesn’t transpire without bold vision, private arm-twisting and public setbacks. But Swofford navigated that course in an unpretentious way that fostered consensus and confidence.

“Many people succumb to ego and all the trappings of the position and lose their genuine appreciation of people and relationships, and that’s something that John [never did],” said Paul Hoolahan, a former Vanderbilt athletics director and Sugar Bowl CEO.

“He wasn’t real vocal in a lot of [commissioner] meetings,” retired Colonial Athletic Association commissioner Tom Yeager said, “but everyone paid attention when he did have a comment. There are a lot of guys in that group who love to hear themselves talk. He was literally so gracious, so unassuming.”

Swofford’s approach was evident in desk plaques he gave to ACC staffers many years ago. Each was inscribed with a quote often attributed to Harry Truman: “It is amazing what you can accomplish if you do not care who gets the credit.”

“John wasn’t standing on the chair trying to get on TV every day,” said Kelly, who still has the plaque. “He just wanted to do it in his own way, and do it in a way that to him was authentic and genuine. He has a great gift for understanding everyone’s perspective and trying to find … that deal that can be struck.”

All the while, Swofford protected the camaraderie that has marked the conference since its 1953 naissance in Greensboro, N.C. And no one understands and values that culture like Swofford.

The ACC has been a part of Swofford’s family since the Eisenhower administration.

His brother Jim played football at Duke from 1957 to 1959, and John earned the prestigious Morehead academic scholarship at North Carolina, where he played football from 1969 to 1971 and discovered an affinity for sports administration. Then-Tar Heels AD Homer Rice, 93, counsels Swofford to this day.

After securing a master’s in sports administration at Ohio University, Swofford landed his first full-time job in 1973, as ticket manager at Virginia under then-AD Gene Corrigan. Desperate for affordable housing, Swofford bunked on a cot in the tin-roofed field house at the south end zone of Scott Stadium.

The day of his first home football game, the Cavaliers’ opener against VMI, Swofford discovered that his predecessor had sold an entire section of the stadium twice.

“I learned a little something about crisis management right off the bat,” Swofford said.

Virginia’s basketball arena, University Hall, also staged pro wrestling shows that invariably sold out, and the pistol-carrying promoter dealt only in cash, which he lugged out of U-Hall in sacks.

“He was a great guy,” Swofford said, laughing, “but I was always so relieved when he left.”

In 1976, Swofford ‘s alma mater beckoned him home. He interviewed for, and accepted, the Tar Heels’ assistant AD position at halftime of the ACC basketball tournament championship game between UVA and North Carolina at the Capital Centre in Landover, Md.

Swofford was torn during the second half, watching Wally Walker lead the Cavaliers over the Heels.

Four years later, UNC promoted Swofford to athletics director. He was 31 and the nation’s youngest Division I AD.

In large measure, athletic directors are graded on their coaching hires, and at Carolina, Swofford’s knack was uncanny. He appointed Mack Brown in football, Sylvia Hatchell in women’s basketball, Karen Shelton in field hockey and Dennis Craddock in track, hall of famers all, and in 1993-94, the Tar Heels won the inaugural Directors’ Cup for all-sports excellence.

When Corrigan, his mentor and dear friend, retired as ACC commissioner in 1997, Swofford was a natural successor, and his flair for identifying talent continued. Atlantic 10 commissioner Bernadette McGlade, America East commissioner Amy Huchthausen, West Virginia AD Shane Lyons and Kelly, the former chief operating officer of the College Football Playoff, are among those he hired at the ACC.

Following Corrigan and Rice’s lead, Swofford empowered his staff, encouraged varying opinions and resisted micromanagement, and like Truman, he didn’t want credit. He remained the humble gentleman whose go-to order at his family’s restaurant, the Brushy Mountain Smokehouse and Creamery, is western North Carolina barbecue and vanilla ice cream.

Yet for all the mild manners, Swofford has a fiercely competitive streak, and Hoolahan, a former UNC teammate, witnessed it athletically and administratively.

“I used to call it the red face,” Hoolahan said. “He would never have any outbursts, except you could see his blood pressure was rising.”

Surely his BP spiked in November 2012.

Fresh off engineering the ACC’s additions of Pittsburgh, Syracuse and Notre Dame, the Fighting Irish without football, Swofford was blindsided when charter member Maryland revealed its intention to bolt for the Big Ten. With much of college athletics in realignment frenzy, the Terps’ defection created grave doubts about the ACC’s viability.

Masking the natural anger, Swofford huddled staff and league presidents to plan a counter. Less than two weeks later, the ACC invited Louisville — the Cardinals were in the midst of a basketball season capped by a national championship and a football season punctuated by a Sugar Bowl victory — to join the conference.

“There was never any panic on his part,” retired Wake Forest athletics director Ron Wellman said. “Because of his love for the conference and history with the conference, he was very self-assured and confident that [we were] going to survive.”

Even as the Big Ten and Southeastern Conference, both driven by massive fan bases and the SEC by unsurpassed football depth, lapped the field in revenue, ACC teams have won three national championships each in football and men’s basketball in the past seven years.

No other conference can stake that claim. Moreover, Swofford has led mental health initiatives for ACC athletes, and the league’s institutions continue to excel in the NCAA’s academic metrics.

“He was a perfect steward,” Kelly said, and a bridge from the tradition of the ACC to positioning it for the future.”

An essential component to that modernization was the advent of the conference’s football championship game, and on the afternoon of the 2019 contest in Charlotte, N.C., I bumped into John, Nora and a couple of their grandchildren as they strolled outside.

Coat and tie replaced by casual attire and a ball cap, Swofford was blissfully content. He is today, too, sailing into retirement and awaiting completion of a new home at Greensboro’s Sedgefield Country Club, the very setting where the ACC was founded.

“Reliving the [career] journey just brings a smile to my face,” Swofford said. “One chapter is closing, but another that I’m really excited about is opening. It’s a good time.”

As Atlantic Coast Conference commissioner, John Swofford was among the founding fathers of the College Football Playoff and persuaded ESPN to become a partner in the ACC Network. Swofford led the conference through realignments and expansion from nine to 15 schools.

ACC commissioner John Swofford is ending a 48-year career in college athletics administration on Monday. He guided the conference through major changes during almost 24 years as its leader.

ACC Commissioner John Swofford speaks at the lectern before the ribbon cutting ceremony for the ACC Hall of Champions on Wednesday, March 2, 2011, in Greensboro, NC, at the Greensboro Coliseum. Dick Grubar (left), an original member of the ACC Hall of Champions Advisory Commission, was also in attendance. (names and location CQ by jw) (Jerry Wolford, news-record.com) 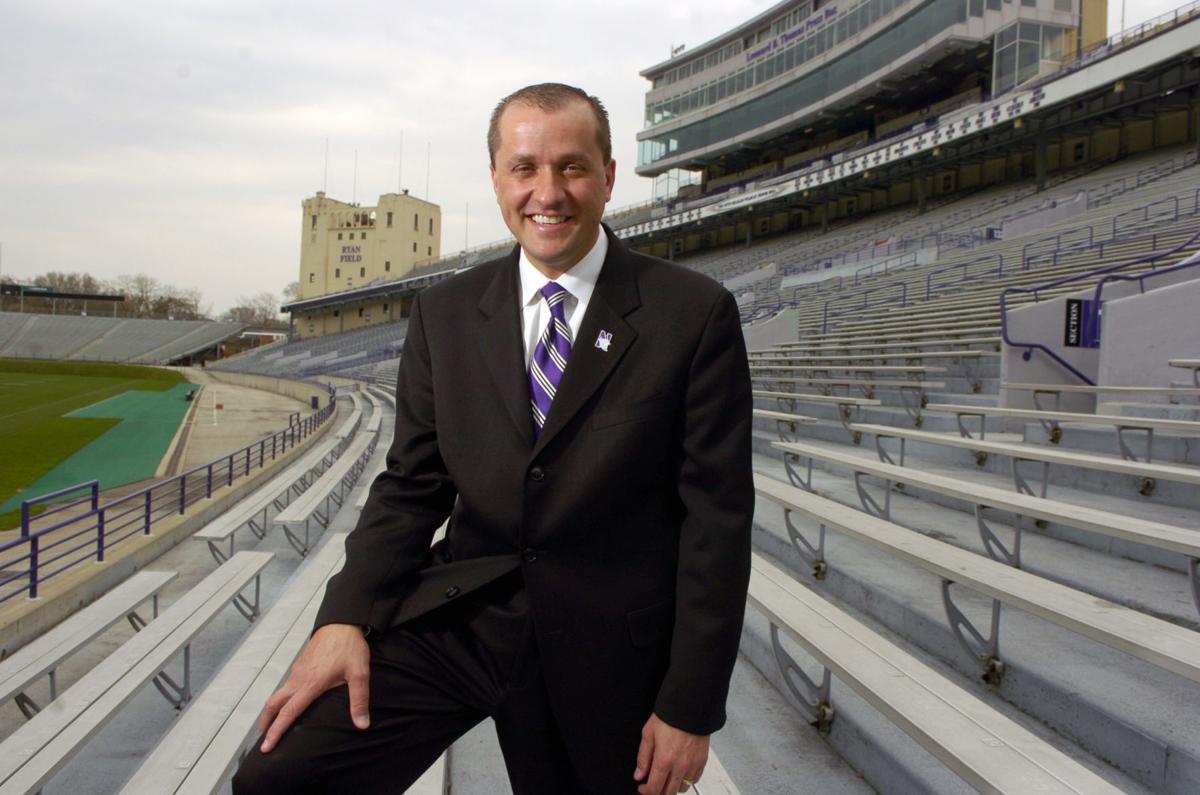