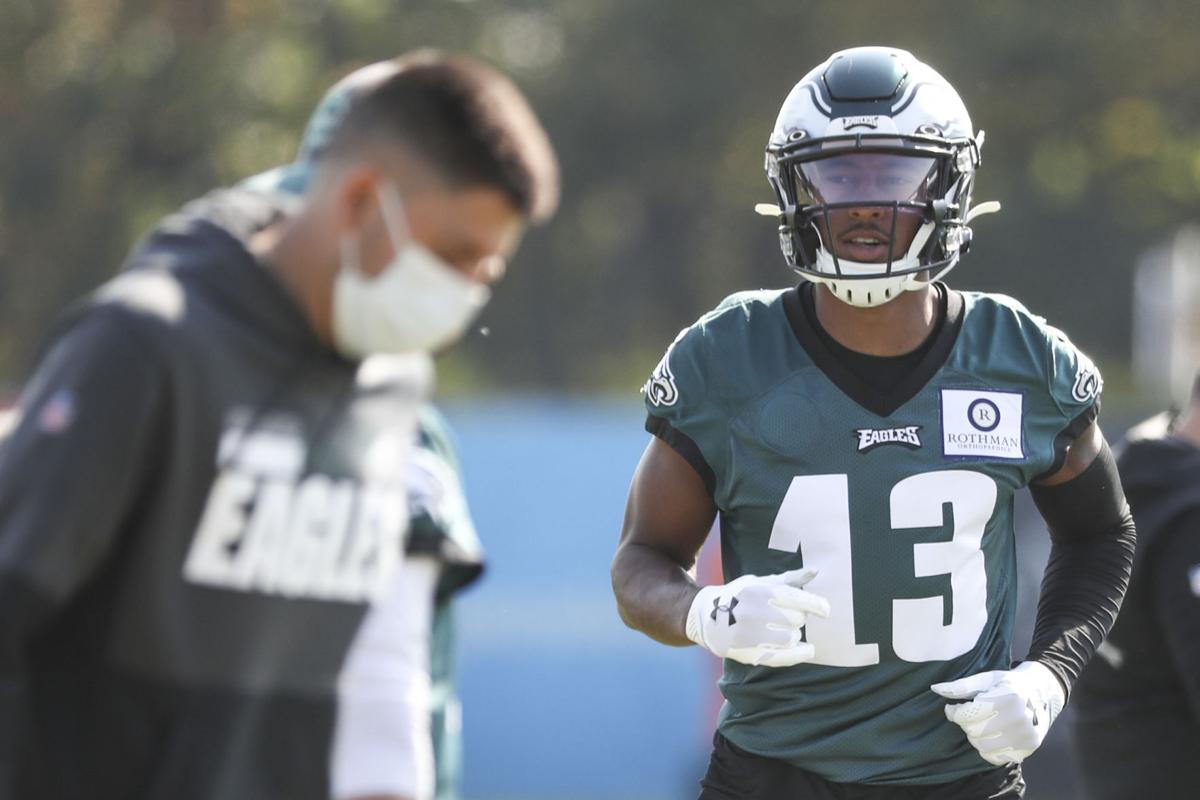 Eagles wide receiver Travis Fulgham runs to participate in a drill during practice at the NovaCare Complex in South Philadelphia on Wednesday, Oct. 07, 2020. 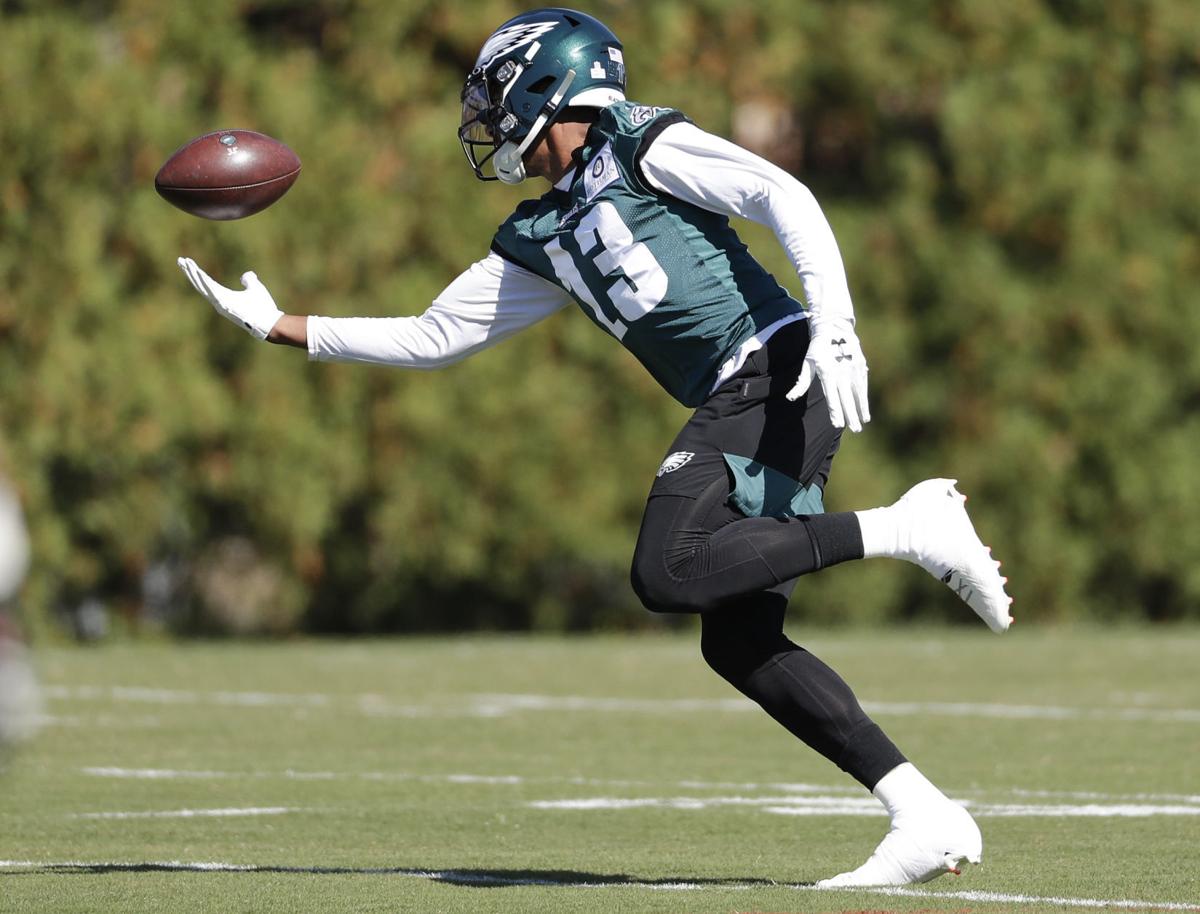 Eagles wide receiver Travis Fulgham catches the football during practice at the NovaCare Complex in South Philadelphia on Thursday, October 8, 2020.

Cutcliffe was half right.

Tech’s shortcomings extended throughout the season. Indeed, 2018 was statistically the program’s worst defense in 45 years.

But headlined by Travis Fulgham, Monarchs wideouts were exceptional in that 49-35 shocker in Norfolk. Often elevating over Hokies defenders, Fulgham caught nine Blake LaRussa passes for 188 yards and a touchdown.

A graduate of Broad Run High in Ashburn, Fulgham had a similarly productive afternoon last Sunday for the Philadelphia Eagles, the latest stop of a remarkable global journey that’s taken him to countries such as Jordan, Egypt, South Africa and India.

Born to Foreign Service Officers for the United States Agency for International Development, Fulgham had a passport at age 3 — his mother, Celeste, cradled him in her arms for the photo. He saw wonders such as the Great Wall, Colosseum, Vatican, Great Pyramids and the Taj Mahal, the latter his favorite.

“Traveling gave me a greater appreciation for everything I have,” Fulgham told me during his final season at ODU.

“He’s very bright, very experienced, and has seen a lot of things that most young guys haven’t seen before,” said John Allen, then ODU’s receivers coach. “You can tell that. He’s very intellectual and he really studies his craft, and I think because he has that maturity about him outside of football, it helps him in the game.”

Fulgham didn’t live in the U.S. until the ninth grade, and his primary youth sports were soccer, cricket, basketball and rugby. He discovered football at Massanutten Military Academy and, after just one varsity season at Broad Run, walked on at ODU in 2014.

He was on scholarship within weeks.

Four-plus years later, Fulgham was the second-leading receiver in the program’s brief history and an NFL prospect. The NFL front-office gig that Fulgham aspires to — he majored in sports management — would have to wait.

Chosen in the sixth round of the 2019 draft by the Detroit Lions, Fulgham was cut or waived a combined five times by the Lions, Eagles and Green Bay Packers from September 2019-September 2020. He appeared in three games for Detroit last season but did not catch a pass.

Their receiving corps ravaged by injuries, the Eagles signed him off their practice squad Oct. 3. The following night, against the reigning NFC champion San Francisco 49ers, Fulgham started for the first time as a pro and caught a game-winning, 42-yard touchdown pass from Carson Wentz late in the fourth quarter.

In a road setback to the Pittsburgh Steelers last week, Fulgham had 10 receptions for 152 yards and a score. Since 2016, Alshon Jeffery (160) and DeSean Jackson (154) are the only Eagles receivers with more yards in a game.

“I think first of all he’s a beast,” Wentz said last Sunday. “He showed up today and showed [that] really last week, that the two big plays he had, they weren’t a fluke. The kid, he’s a baller. He made a lot of big plays. I was really proud of him and pumped for him.”

At 1-3-1, Philadelphia trails only the 2-3 Dallas Cowboys in the unsightly cluster that is the NFC East. And with Cowboys quarterback Dak Prescott done for the season with a compound fracture and dislocation of his right ankle, a playoff spot is there for the taking.

But the Eagles’ schedule is not friendly. They play the Baltimore Ravens on Sunday and face consecutive late-season tests against the Cleveland Browns, Seattle Seahawks and Packers.

“Whenever we have free time, before, during practice, or after practice, we’re working on our chemistry,” Fulgham said last Sunday. “Carson’s a great quarterback, he’s putting the ball on the money, and I’m just coming up with the play.”

David Cutcliffe is not surprised.

"To be quite honest with you, we don’t trust the college very much anymore.”

Teel: Disruptive defense not enough for UVA in loss at Miami

As the wild world of nonconference college basketball scheduling continues to turn, VCU on Monday lost three games it had planned to start the season.

Often lamented but never repaired, ACC football’s flawed schedule rotation has been exposed this month like rarely before.

“I believe we’ll have a year of college basketball that people will enjoy,” North Carolina coach Roy Williams said.

The Atlantic 10 men’s basketball preseason poll came out this week last year. VCU led the way, and it wasn’t close in voting among league head…

Consistency eluding Virginia Tech, UVA, but they're not alone

Early in his college football coaching career, Mack Brown received some advice that shocked him and still befuddles him to this day. In a then…

Eagles wide receiver Travis Fulgham runs to participate in a drill during practice at the NovaCare Complex in South Philadelphia on Wednesday, Oct. 07, 2020.

Eagles wide receiver Travis Fulgham catches the football during practice at the NovaCare Complex in South Philadelphia on Thursday, October 8, 2020.