Teel: In Brent Pry, Hokies may have found the football version of Mike Young
0 Comments
Share this
1 of 2 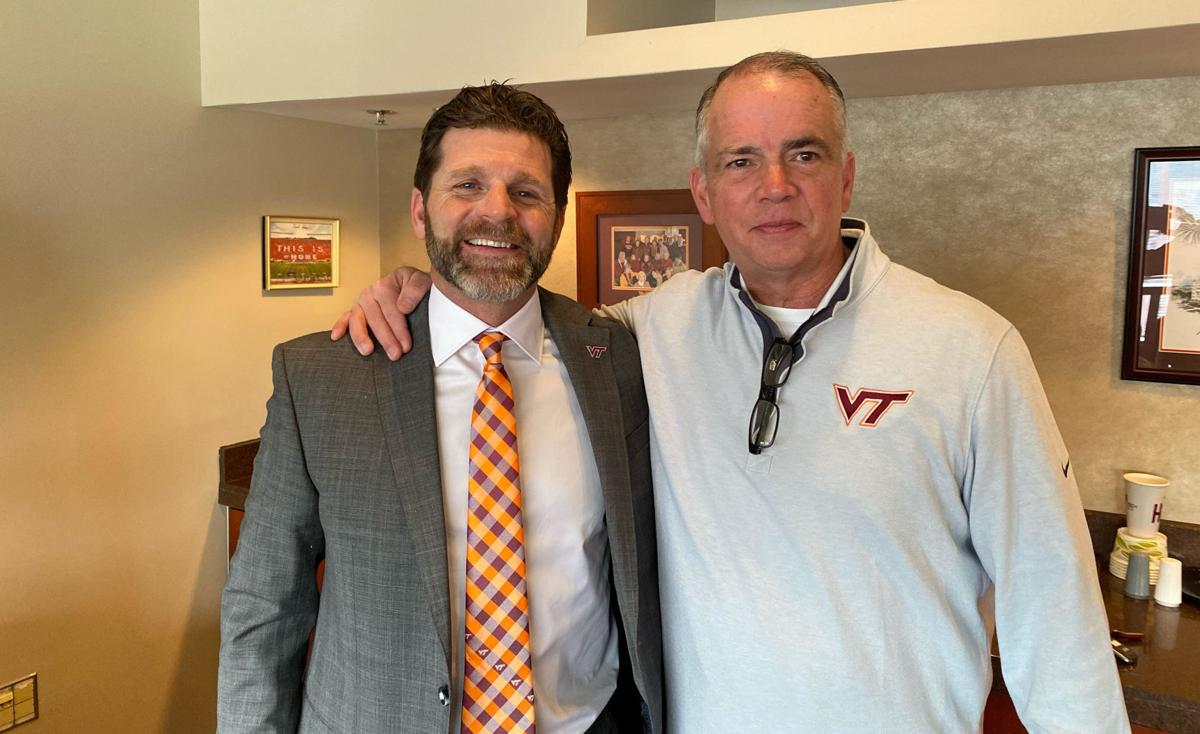 New Virginia Tech football coach Brent Pry (left) and Hokies basketball coach Mike Young both went to high school along the I-81 corridor — Pry in Lexington and Young in Radford. 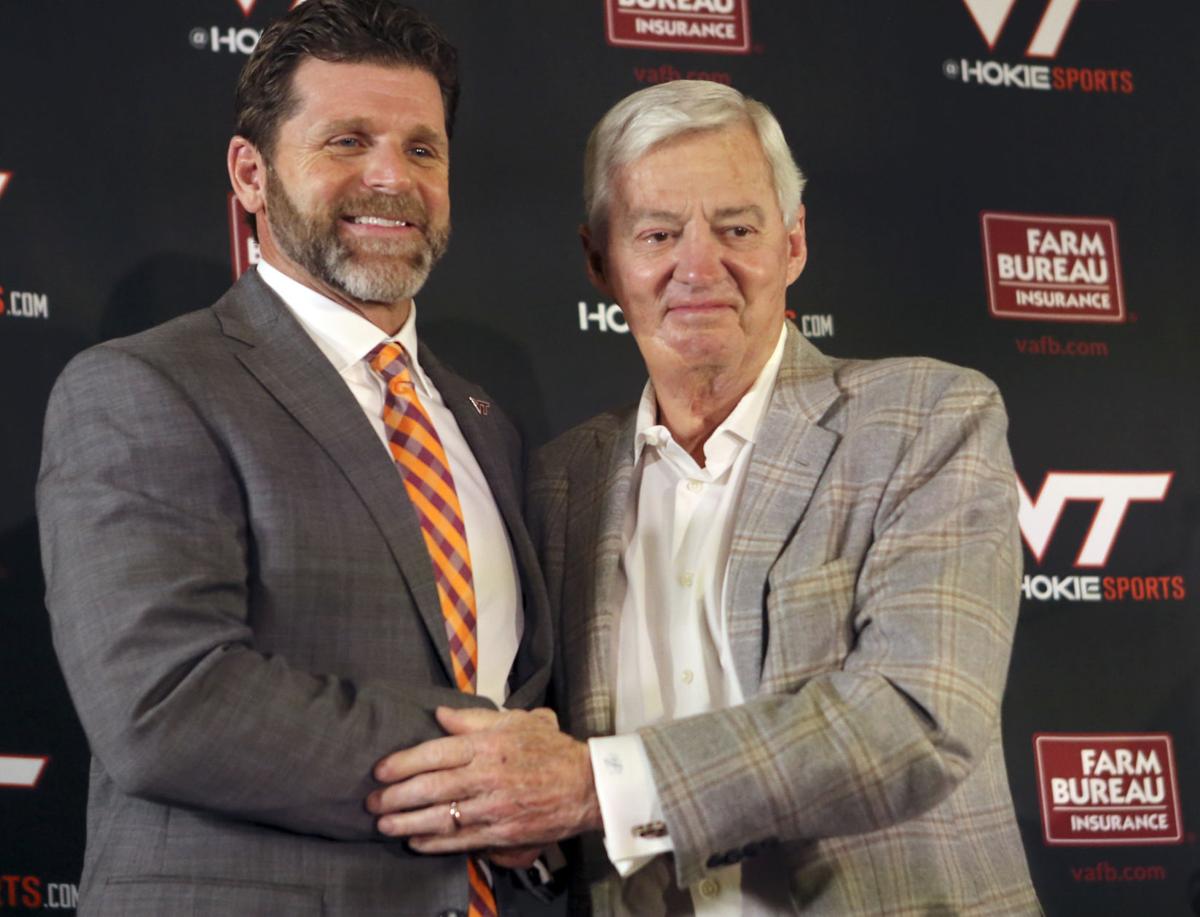 “Yeah, my fondest memory came just roaring back to me yesterday when I walked out on the 50-yard line in the stadium,” Pry said at his introductory news conference, “and I remembered 1995, my first season [as a graduate assistant coach]. We were 0-2 and had lost to Boston College and Cincinnati and we had the vaunted Hurricanes coming to town, and they had all the accolades and the shiny uniforms and the orange cleats, and then we proceeded to whip that tail 13-7 if I remember right.

“Played great defense and ran the ball and turned the season around. Won 10 straight including the Sugar Bowl on New Year’s Eve. For me that ’95 Miami game is my fondest memory. … And maybe the experience after the Sugar Bowl with Wes Worsham and J.C. Price on Bourbon Street.”

Pry nailed the score and the sentiment, and as he navigated the remainder of his media obligations, I couldn’t help but wonder if Virginia Tech athletic director Whit Babcock found the football version of Mike Young.

First, a quick rewind: Beamer, the Hokies’ retired Hall of Fame coach, has long identified the ’95 victory over Miami as the game that vaulted his program into the national conscience. Tech, indeed, won its final 10 games that season, capped by an upset of Texas in the Sugar Bowl, and Beamer, sitting in the front row Thursday, nodded approval as Pry mentioned those moments.

And the men that Pry celebrated with along New Orleans’ shrine to debauchery? Well, Price was a Hokies All-America defensive tackle who will, after continuing as interim head coach for Tech’s upcoming bowl, be Pry’s associate head coach, and Worsham is among the school’s most beloved and generous donors. Hence the name, Lane Stadium/Worsham Field.

The parallels are not remotely exact. After all, Young came to Virginia Tech with 17 years of head-coaching experience at Wofford. Pry has none.

Young had never worked in a power conference. Pry served under James Franklin for three seasons in the SEC at Vanderbilt and the past eight in the Big Ten at Penn State.

But just as Young did at Emory & Henry, Radford and Wofford, Pry learned his trade at small programs with limited resources, schools such as East Stroudsburg State, Western Carolina, Louisiana-Lafayette, Memphis and Georgia Southern.

Young was 55 when he landed in Blacksburg. Pry is 51, each man content in his former position and patiently waiting for the right opportunity.

Most important, of course, Young and Pry share commonwealth roots and an innate affection for the Hokies, even though neither attended Virginia Tech. Both went to high school along the stretch of I-81, Young in Radford, Pry in Lexington, where Hokies are prevalent, and both have childhood campus memories.

“Oh, believe me,” Pry said. “It was my dream to play here. And I did come to camp here. I know Coach Beamer won’t remember, but I did. I just was never the player to be at Virginia Tech, but it was always just such a presence for me in my life.”

Though not a splashy hire, Young has become wildly popular among Hokies faithful, his neighborly demeanor and skillful coaching energizing the base. Pry has the potential to do the same and, like Young, make Virginia Tech his destination job.

“Relationships [are] where it’s at for me,” Pry said, channeling Young. “I seemed to have aligned myself in each stop with people that believe in that, that that’s where it starts, from Coach Beamer to James Franklin and everyone in between.

“That’s not going to change for me. That’s what’s right for Virginia Tech, and that’s who this place is.”

Fresh off Wednesday night’s victory at Maryland, Young attended Thursday’s festivities, and I asked him about the similarities to Pry.

“Absolutely,” he said. “Brent viewed this place as a mecca, and so did I.”

Pry’s regard for Virginia Tech was evident to Babcock in their first Zoom encounter.

The full-circle nature of Pry’s coaching odyssey was inescapable Thursday as he choked up thanking Beamer and Beamer’s longtime defensive coordinator, Bud Foster. They are the mentors Pry credits for launching his career.

“It started here,” Babcock said, “and we certainly hope it will finish here. It’s a wonderful story, from history to now making new history.”

New Virginia Tech football coach Brent Pry (left) and Hokies basketball coach Mike Young both went to high school along the I-81 corridor — Pry in Lexington and Young in Radford.