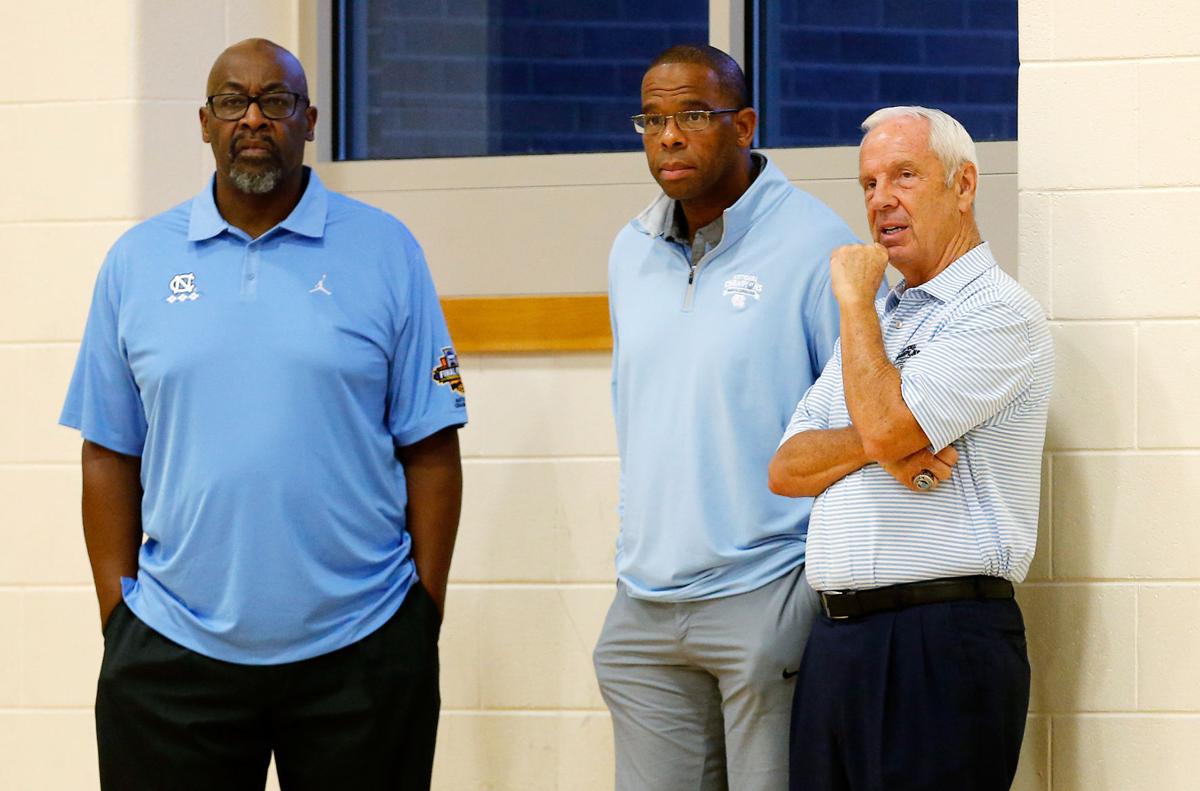 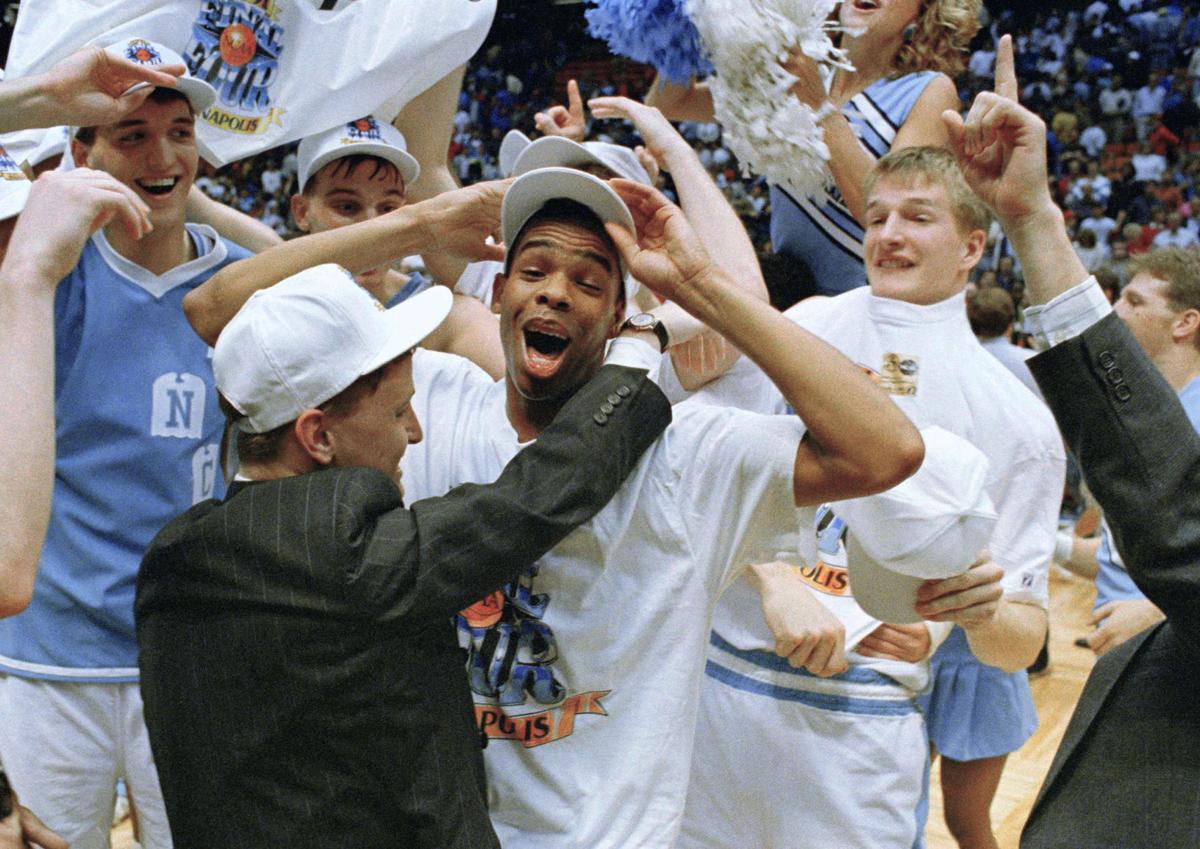 UNC’s Hubert Davis celebrated on the court after the Tar Heels defeated Temple 75-72 in the Elite Eight in 1991. Davis, who was just promoted to head coach at UNC, and his teammates went on to lose in the Final Four against Kansas, coached by his predecessor, Roy Williams.

Rookie men’s basketball coaches are rare in the ACC. The league is too ruthless, the stakes too high, for most athletic directors to entrust the job to someone who’s never occupied the corner office.

But if any program and fledgling can make it work long-term, it’s North Carolina and Hubert Davis.

Smith was a 30-year-old Carolina assistant when he replaced Frank McGuire. But college basketball has become infinitely more complex, competitive and lucrative, furthering the need for seasoned leadership at the highest levels.

That’s why the Tar Heels lured Williams, a UNC graduate and former Smith assistant, home from Kansas in 2003. He had coached the Jayhawks to four Final Fours and 13 NCAA tournaments in 14 years. He was proven.

Davis is not, but he assumes command with a unique understanding of Carolina basketball, past and present, that when combined with the program’s resources and heritage abates some of the risk inherent in all coaching searches.

He’s the nephew of former UNC great Walter Davis. He played for Smith, helping the Tar Heels win two ACC tournaments and reach a Final Four. He spent the past nine seasons coaching under Williams and owns a national championship ring from 2017.

Did accomplished head coaches, with and without UNC pedigree, covet the job? Absolutely.

Did Tar Heels athletic director Bubba Cunningham interview some of them? Certainly.

And history tells us that path would have been safest.

This was the 52nd ACC basketball search since 1970, only the seventh to land on a candidate without Division I or NBA head-coaching experience. The others — Duke’s Neill McGeachy in 1974, Maryland’s Bob Wade in 1986, Virginia’s Jeff Jones in 1990, North Carolina’s Bill Guthridge in 1997, Miami’s Frank Haith in 2004 and Virginia Tech’s James Johnson in 2012 — produced, to be generous, mixed results.

Guthridge coached under Smith for three decades, and when Smith abruptly retired in October 1997, UNC had little choice but to elevate Smith’s trusted lieutenant. But Guthridge was 60 and unlikely to be an enduring fix, and after three seasons, two of which ended at the Final Four, he, too, retired.

Davis is 50, a graduate of Lake Braddock High in Fairfax County, and if the Tar Heels win on his watch, this is his destination gig.

“I love this university,” he said in a news release. “I played here, I earned my degree here, I fell in love with my wife here, I got married here, I moved here after I retired from the NBA and I have raised my family here.”

A 6-foot-5 guard, Davis chose North Carolina over UVA in 1988, earned second-team All-ACC honors as a senior and is the program’s career leader in 3-point shooting percentage at 43.5. The 20th selection of the 1992 NBA draft, he played 12 seasons in the league, and his career 3-point accuracy of 44.1% ranks second only to Steve Kerr’s 45.4.

In short, Davis had game and is the only ACC coach remotely capable of challenging UVA’s Tony Bennett (NCAA record 49.7% from deep in four seasons at Green Bay) in H-O-R-S-E.

An ESPN analyst before joining Williams’ staff, Davis isn’t among Carolina basketball’s legions of All-Americans, but the esteem in which he is held by Tar Heels, and at least one Blue Devil, is unmistakable.

“He directly connects our storied past with our exciting future,” UNC chancellor Kevin Guskiewicz said in Monday’s release.

“I had the honor to work alongside Hubert for many years at ESPN,” former Duke player Jay Bilas tweeted, “and I simply don’t know a better person. Don’t let the smile and laugh fool you. Hubert is a cutthroat competitor with an uncommon understanding of the game. And he bleeds Carolina blue. Hubert is the real deal.”

Current and former Tar Heels such as Armando Bacot (Trinity Episcopal), Kenny Williams (L.C. Bird) and Kennedy Meeks also tweeted their applause of Davis’ hiring, and you can bank that Roy Williams yearned for the job to remain in the family. But family doesn’t assure success, as Carolina learned post-Guthridge with Matt Doherty.

Staff is paramount for any head coach and will be more so for Davis given his inexperience. Indeed, a primary reason Virginia won 105 games in Jones’ first five years was top-shelf assistants such as Dennis Wolff.

Turbulent times in college athletics — a pandemic, burgeoning transfer portal and impending athlete compensation for name, image and likeness — await Davis, but so do six national championship banners and a deep understanding of what it takes to hang them.

UNC’s Hubert Davis celebrated on the court after the Tar Heels defeated Temple 75-72 in the Elite Eight in 1991. Davis, who was just promoted to head coach at UNC, and his teammates went on to lose in the Final Four against Kansas, coached by his predecessor, Roy Williams.