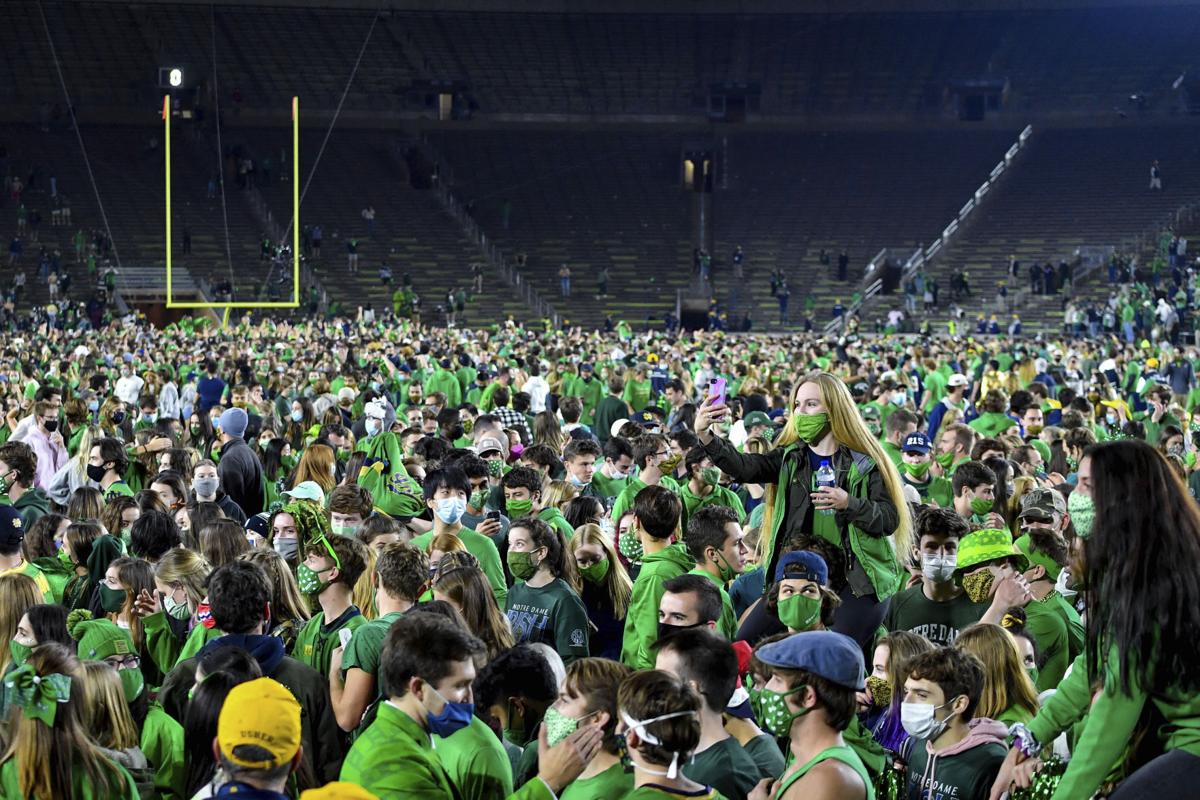 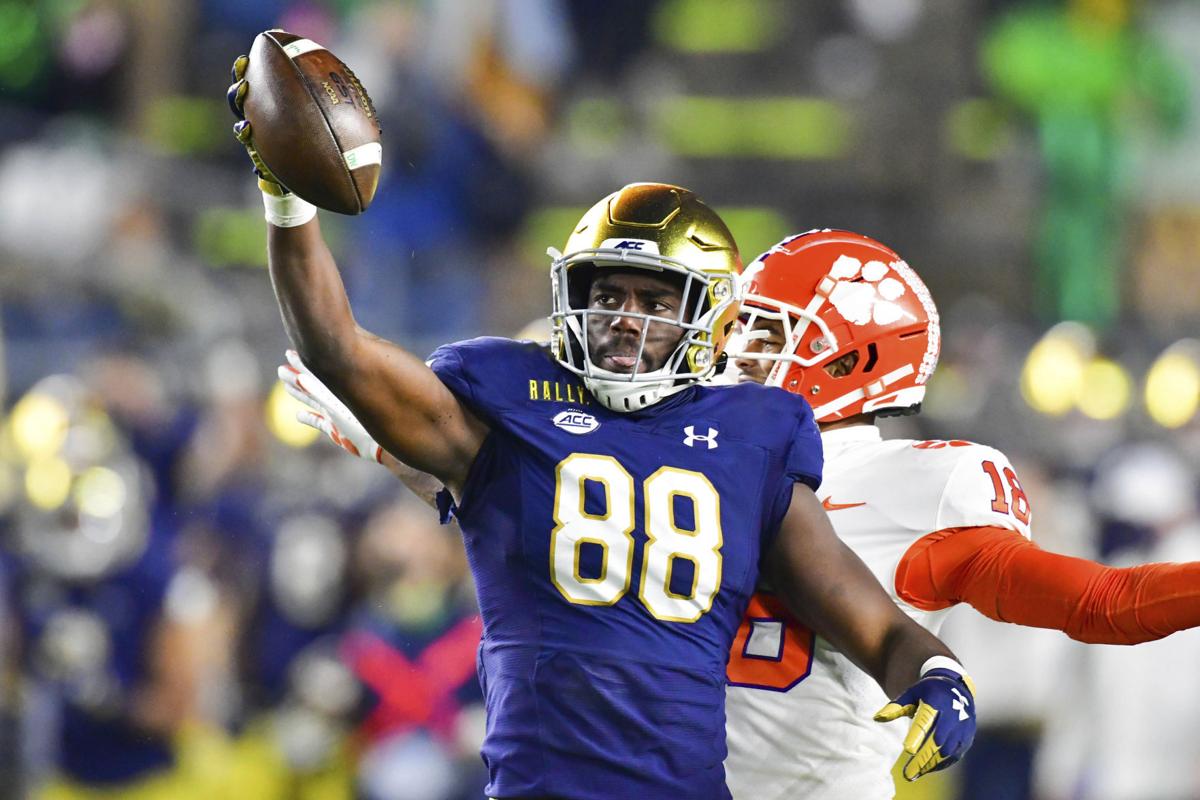 WR Javon McKinley and Notre Dame topped Clemson 47-40 in an OT epic on Nov. 7 last year. The matchup of the nation’s No. 2 and No. 4 teams was the top TV draw of the regular season.

“Just being able to join the ACC is all we could ask for,” he says. “We wanted to play football bad, and the fact they let us in, we were fortunate for that. And now we’re the only [Notre Dame football] team to join the ACC, and it might not ever happen again. So it’s pretty cool, pretty cool to say that.”

Yep. Their original 2020 schedule torched by the pandemic, the Irish found safe harbor in the ACC, their conference home for other sports.

But the moment its season ended, with a College Football Playoff semifinal loss to eventual champion Alabama, Notre Dame returned to its treasured independence, content to play, as contracted, an average of five ACC opponents annually.

Few expect that stance to change anytime soon, if ever — unless CFP expansion seriously compromised the Irish’s access to the national championship tournament.

Should that day arise, this much is certain: The Irish would bring to the ACC untold intrigue, truckloads of cash and intriguing schedule options.

More on those options in a moment. First, playoff expansion, the sport’s annual spring/summer obsession.

“It’s been a tremendous event, but is there a better model?” ACC commissioner Jim Phillips said Thursday as the league closed its annual spring meetings. “… We owe it to ourselves [and] the fans to look at that.”

An expanded playoff’s impact on player safety, the regular season and academic calendar, and a bowl system that Phillips believes “is worth saving” all must be examined.

“I think we’ll get to the right place,” Phillips said. “But to me, that’s not gonna happen in the few months or the next six months. I think that’s gonna take some time. We need to do a thorough assessment before making any major decisions.”

With no such automatic bids, the current four-team format puts Notre Dame on level footing with the 64 programs that compete in the Power Five conferences. Indeed, since the CFP’s 2013 debut, the selection committee has chosen the Irish both times they survived the regular season with fewer than two defeats — in 2018 as independents and last season as an ACC member.

But what if the playoff expands to eight teams with automatic bids to each Power Five champion and the highest-ranked Group of Five champion? That would leave Notre Dame scrambling for one of two at-large spots.

Less likely but not beyond the realm: What if the CFP went to six teams with automatics to each Power Five title-game winner? Then the Irish would be competing for the lone at-large bid.

Notre Dame’s calculation then would become: If entree to a national championship is paramount, do we have better odds of earning the ACC’s automatic bid or an at-large?

An expanded playoff of 12 or 16 teams would create additional at-large slots and erase this potential incentive for the Irish to forgo independence.

Now about those scheduling models. Both of the following keep the ACC at eight league games to give Notre Dame as much nonconference flexibility as possible. And both eliminate divisions.

The latter would require the NCAA, as it did for 2020, rescinding the antiquated rule mandating that leagues with championship games either play a round-robin schedule or have divisions. Not even the NCAA is dim enough to deny such a request.

The Irish’s entry would give the ACC 15 full-time members and wouldn’t necessarily require adding another to make it an even 16. With 15 teams, each could be assigned two annual rivals and play the remaining 12 every other season, six one year and six the next.

Growing football membership to 16 would afford each team one annual rival, facing the remaining 14 every other season, seven one year and seven the next. To make ACC membership even more appealing to Notre Dame, would the league consider adding Navy for football only?

The Irish and Midshipmen played every season from 1927-2019 before the pandemic interrupted their streak, but having Navy as an annual ACC rival would give Notre Dame even more nonconference scheduling flexibility.

Adding the Irish would address each of Phillips’ stated priorities: upgrading football, the ACC Network and conference revenue. Phillips is a former Notre Dame administrator, and he’s been asked about the Irish in virtually every interview since.

“I think last year really gave, talking about the 2020 season, gave everybody an opportunity to see what Notre Dame would look like as a full-time member,” Phillips told me in March.

“But those are discussions that I just think will come with time.”

The Irish looked darn good in the ACC. Their double-overtime home conquest of then-No. 1 Clemson was the regular season’s most-watched and compelling contest. Brian Kelly was ACC coach of the year, Jeremiah Owusu-Koramoah the defensive player of the year, and 12 Notre Dame athletes made the three All-ACC football teams.

But the good vibes were limited.

“If they come and ask my opinion, I would say that the ACC has been a great relationship for Notre Dame,” Kelly said prior to the Clemson-Notre Dame rematch in the conference title game, “but independence has been something that is part of who we are in our DNA.”

WR Javon McKinley and Notre Dame topped Clemson 47-40 in an OT epic on Nov. 7 last year. The matchup of the nation’s No. 2 and No. 4 teams was the top TV draw of the regular season.