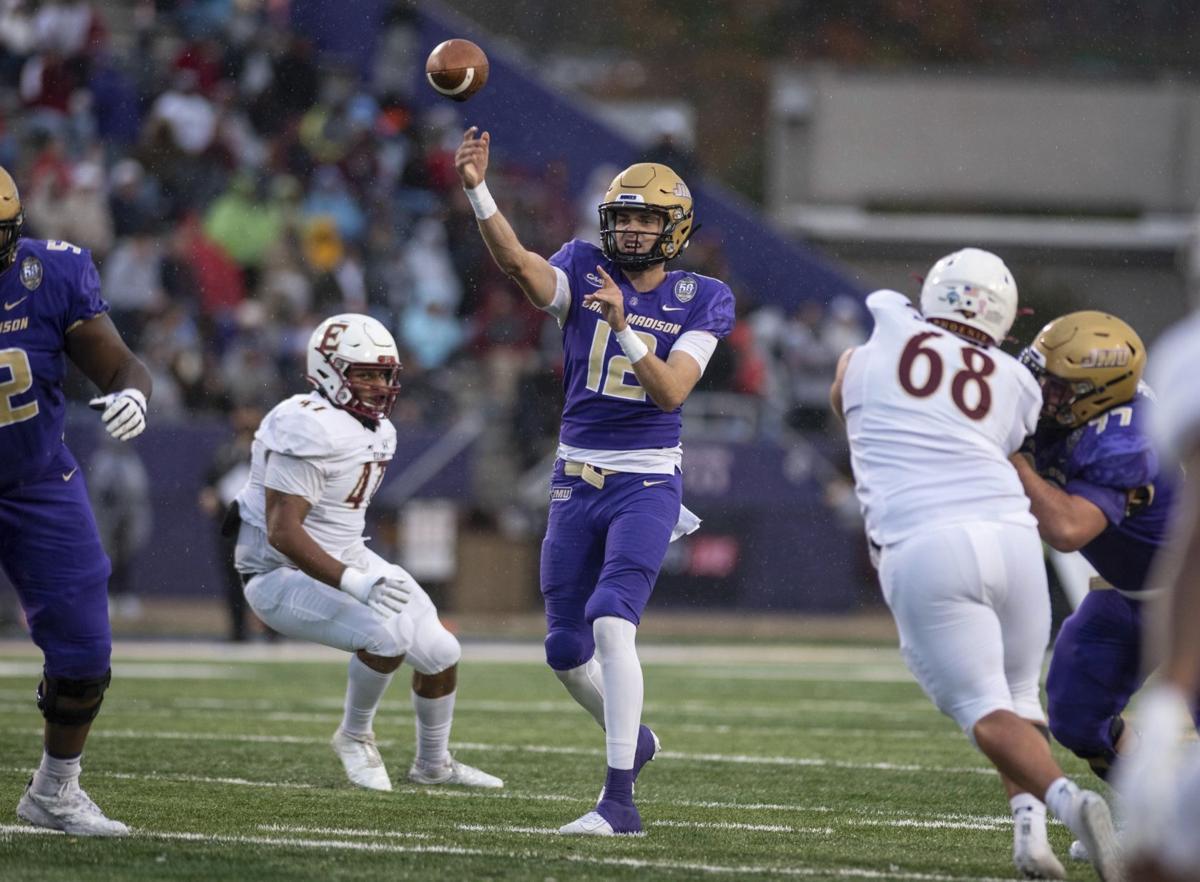 James Madison quarterback Cole Johnson fires a pass during the first half. Johnson completed 22 of 25 for 307 yards and six touchdowns in the Dukes’ victory. 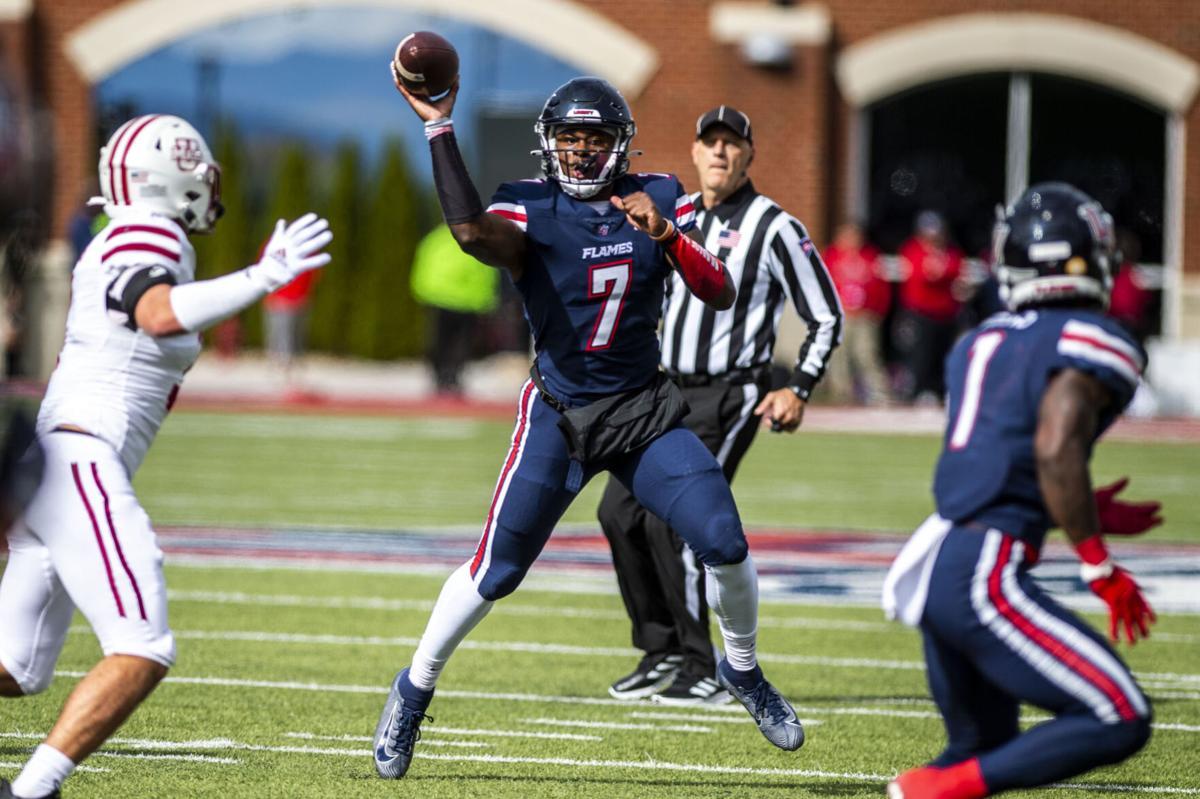 If there has ever been a more remarkable, insane and riveting day of Division I college football in Virginia, consider me unaware.

What began at noon Saturday in Atlanta, Lynchburg and suburban Pittsburgh, ended at 1:59 a.m., Sunday in the Utah Valley, 14 hours of sheer madness in five states that gave defensive coordinators the hives and reminded legions that virtually no lead is safe.

All 10 of the state’s Division I teams played. Eight won, two lost, and the pair that stumbled combined to score 84 points.

And time is the only rational way to remotely grasp Saturday’s results. So let’s review the games in the chronological order in which they ended, often with everyone in the stadium or monitoring from afar breathless.

Atlanta, 3:15 p.m.: Virginia Tech was among five Bowl Subdivision teams that entered Saturday without a scrimmage play of at least 50 yards this season. Turner erased that distinction with receptions of 69 and 61 yards in the first half of a 26-17 victory at Georgia Tech. His 187 receiving yards were the most by a Hokie since Cam Phillips’ 189 at East Carolina in 2017.

Lynchburg, 3:35 p.m.: Willis was typically exceptional, throwing for 307 yards and four touchdowns in Liberty’s predictable 62-17 thrashing of hapless Massachusetts. The Flames are 25-8 in two-plus seasons under Hugh Freeze and now prepare for their most challenging game of the season: Saturday at Ole Miss.

Durham, N.H., 4:01 p.m.: Dressler’s 15 tackles headlined a Richmond defense that limited New Hampshire to 243 yards, 3.4 per snap, in a 35-17 win at New Hampshire. The Spiders outscored the Wildcats 18-0 in the fourth quarter, and Joe Mancuso, the right index finger he broke in September at Virginia Tech clearly on the mend, threw for 291 yards and three scores as Richmond snapped a five-game losing streak.

Villanova, Pa., 4:09 p.m.: W&M announced itself as a Championship Subdivision contender with all the subtlety of a Metallica concert, dominating fourth-ranked Villanova 31-18, the program’s most consequential road victory since defeating No. 1 Southern Illinois in the 2009 playoffs. Bronson Yoder’s 106 yards led a ground attack that outrushed the Wildcats 258-39, and if you think the Tribe (6-2 and assured of their first winning season in six years) were stingy against the run, how ’bout those four picks?

Lexington, 5:02 p.m.: Speaking of the FCS playoffs, VMI’s first-ever appearance last spring wasn’t a fluke. The Keydets remained players in the Southern Conference race, scoring the game’s final 19 points to rally past Samford 46-45. Morgan set a school record for total offense (516 yards), while Michael Jackson accounted for nearly half of Morgan’s 463 passing yards, accumulating 10 receptions for 211 yards and a touchdown.

Harrisonburg, 5:09 p.m.: JMU eliminated VMI from the spring playoffs, and the Dukes appear headed to their eighth consecutive postseason. Johnson’s program-record six touchdown passes, five in the first half, led JMU past Elon 45-21.

Norfolk, 7:11 p.m.: Saturday’s 23-20 victory over Louisiana Tech was ODU’s first versus an FBS opponent in nearly three years. The Monarchs lost their final FBS game in 2018, all 11 in ’19, skipped last season because of the pandemic and were 0-6 versus FBS teams this year before Rice’s clutch kick. Was quite a way for ODU to celebrate Thursday’s confirmation that its teams are leaving Conference USA for the Sun Belt, which expects to add JMU in the coming days.

Provo, Utah, 1:59 a.m.: Confession time. With the DVR working at home and an early flight to catch out of Atlanta, I intended to check out early on UVA-BYU. When the Cougars bolted to a 21-0 lead, that plan was feasible — until Armstrong warmed up.

College football can only hope that the fourth-quarter rib injury that sidelined Armstrong isn’t serious, because given the chance, he could finish the season with stats worthy of a Heisman Trophy finalist. Fast, slippery and unflappable, Armstrong engineered six consecutive first-half touchdown drives to give Virginia the lead, but the defense had no sacks or takeaways and yielded a staggering 734 yards and 36 first downs in a 66-49 setback.

James Madison quarterback Cole Johnson fires a pass during the first half. Johnson completed 22 of 25 for 307 yards and six touchdowns in the Dukes’ victory.