Affirmation came for Roy Williams — where else? — on the golf course. Augusta National, no less.

Williams shot 88 on Tuesday and 87 on Wednesday, closing the second round with five pars on the last six holes. And it was there, at the home of the Masters, among the Georgia azaleas and the echoes of Bobby Jones, Jack Nicklaus and Tiger Woods, that Williams found peace with his impending retirement as North Carolina’s basketball coach.

So there he was late Thursday afternoon, on Roy Williams Court inside the Dean E. Smith Center, closing his extraordinary career with an even more extraordinary news conference dripping with raw emotion, corny humor and painful self-doubt.

As incurably transparent as he is Southern, Williams wasted little time explaining his departure.

“The biggest reason we’re having this meeting,” he said, “is I just don’t feel that I’m the right man [for the job] any longer.”

Such awareness, whether or not accurate, is uncommon. More uncommon still is sharing and detailing that awareness publicly.

North Carolina went 14-19 last season, Williams’ only losing record in 33 years as a college head coach, 15 at Kansas and 18 at UNC. The Tar Heels progressed this season, but their 18-11 campaign ended with a 23-point, first-round NCAA tournament loss to Wisconsin.

Instead, he blamed himself.

“I just didn’t get it done,” Williams said, lamenting his late-game strategy last year against Clemson and Duke, and this season against Texas.

For 10 years, Williams apprenticed at UNC under Smith, among the best end-game strategists the game has known. Losing the types of games that Smith so frequently won troubled him more than three-putting.

The 85-62 punishment from Wisconsin, the only first-round NCAA defeat of his career, confirmed Williams’ worst fears.

Williams surpassed Smith in career victories (903-879) and national championships (3-2). He joined Smith in the Basketball Hall of Fame in 2007 and won a national title just four years ago. He said he’s “scared to death” of life’s next chapter.

“Ol’ Roy’s gonna feel pretty good about what we accomplished,” he said, the third-person reference perfectly homespun. “Ol’ Roy’s gonna be proud. But the problem is, Ol’ Roy’s selfish. He wanted more, and I didn’t think I could cheat my school or my kids.”

A 1972 North Carolina graduate, Williams never cheated his school or his kids. Not at Owen High in Black Mountain, N.C., where he coached not only basketball but also his second passion: golf. And not at Kansas or Carolina.

Indeed, while at Kansas in 2000, he turned down the job at his alma mater because he had promised then-freshman Nick Collison that he would remain with the Jayhawks throughout his four-year career. Williams never made that vow again, and three years later, the Tar Heels reeling from the first consecutive losing ACC seasons in their history, he returned home.

Williams coached Kansas to four Final Fours and two national title games but never hoisted a trophy. Since he took over at Carolina in 2003, no coach has won more national championships.

“Your ability to run an incredible program and be so down to earth — to students, to fans and to players — is truly remarkable,” UNC athletics director Bubba Cunningham said to Williams during Thursday’s announcement.

Williams’ aw-shucks, self-effacing manner connected him to folks of every ilk. He delighted in acting silly at “Late Night with Roy,” the Tar Heels’ annual open first practice, and in locker room dancing after big wins.

He stewed after every setback and, as he did Thursday, cried at seasons’ ends, never attempting to mask his hurt.

Raised in Asheville, N.C., he caught the coaching bug in ninth grade from his high school coach, Buddy Baldwin. He learned at Carolina from Smith and a staff that included Bill Guthridge and Eddie Fogler, working at first for $2,700 a year and driving film of Smith’s weekly coach’s show to television stations around the state.

Success made him wealthy beyond his imagination, and he and his wife, Wanda, also a UNC graduate, donate faithfully to the school, most recently a $3 million gift last month for scholarships targeting students in financial need.

“You have led this department through servant leadership and [with] and example that is second to none,” Cunningham said.

Williams thanked legions by name Thursday, including 15 assistant coaches, eight administrative assistants and too many players to count. He said one of his favorite photos is from the end of Carolina’s 2019 Sweet 16 loss to Auburn, when he kissed senior guard Kenny Williams (L.C. Bird) on top of the head.

He praised coaching friends such as Tubby Smith, Tom Izzo, Mike Krzyzewski, Bob Huggins, Mark Few and the late John Thompson. And this about his colleague at Virginia:

“Oh my gosh, what a coach Tony Bennett is,” Williams said.

But naturally, his most touching praise was for Smith, who died in 2015 and whose gravesite Williams often visits. Williams did multiple impressions of Smith’s nasally voice Thursday, his love and reverence for his mentor evident as always.

“I could never come close to matching what Coach Smith did,” Williams said, “but every day I tried to make him proud. … I was coaching great youngsters, winning a few games and loving it with my heart and my soul.”

North Carolina Head Basketball Coach Roy Williams and his wife Wanda leave the court after news conference, Thursday, April 1, 2021, in Chapel Hill, N.C. Williams is retiring after 33 seasons and 903 wins as a college basketball head coach. The Hall of Fame coach led the University of North Carolina to three NCAA championships in 18 seasons as head coach of the Tar Heels. (AP Photo/Gerry Broome) 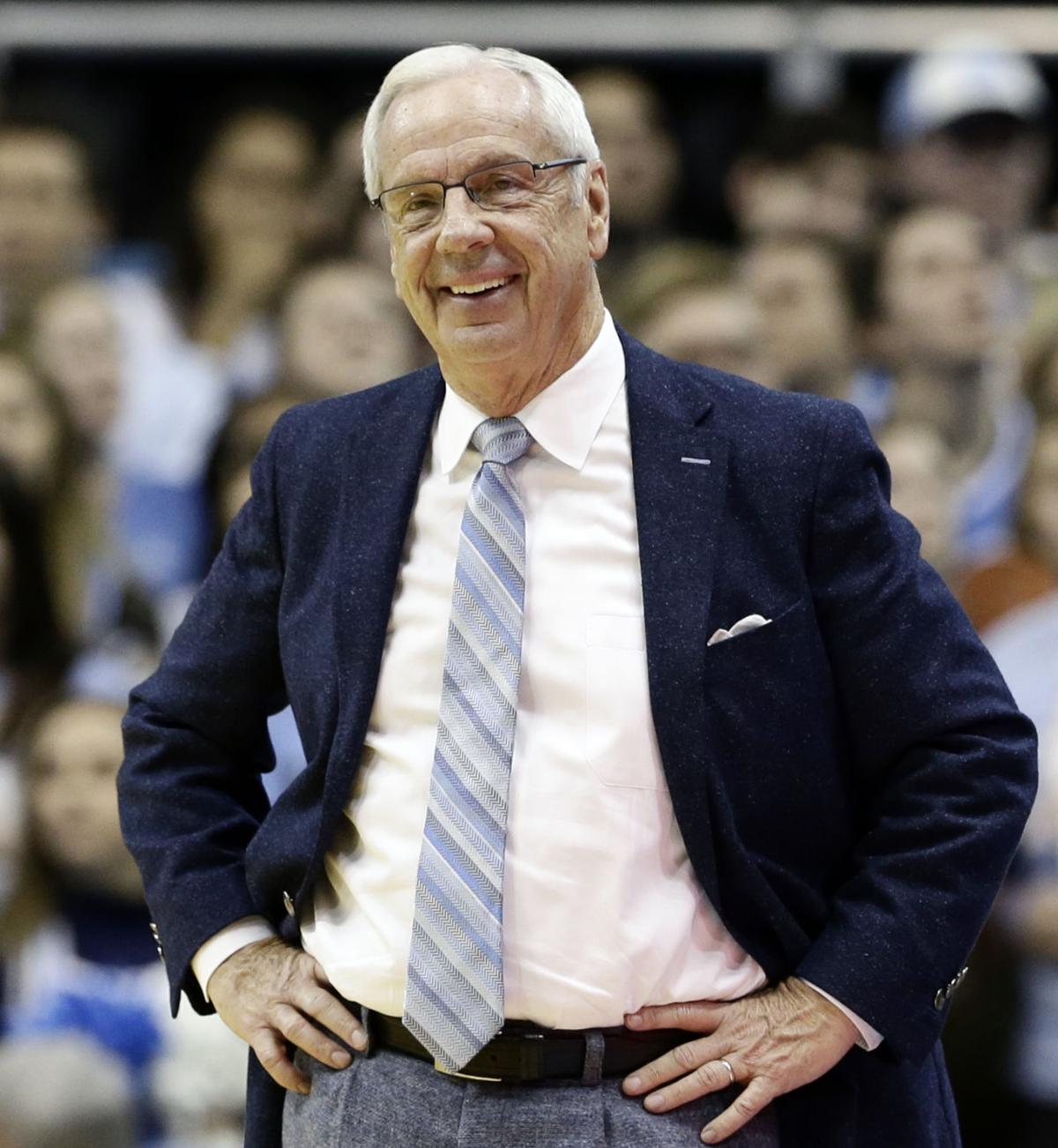 Roy Williams said he retired at UNC because he believed he was no longer the right man for the job.