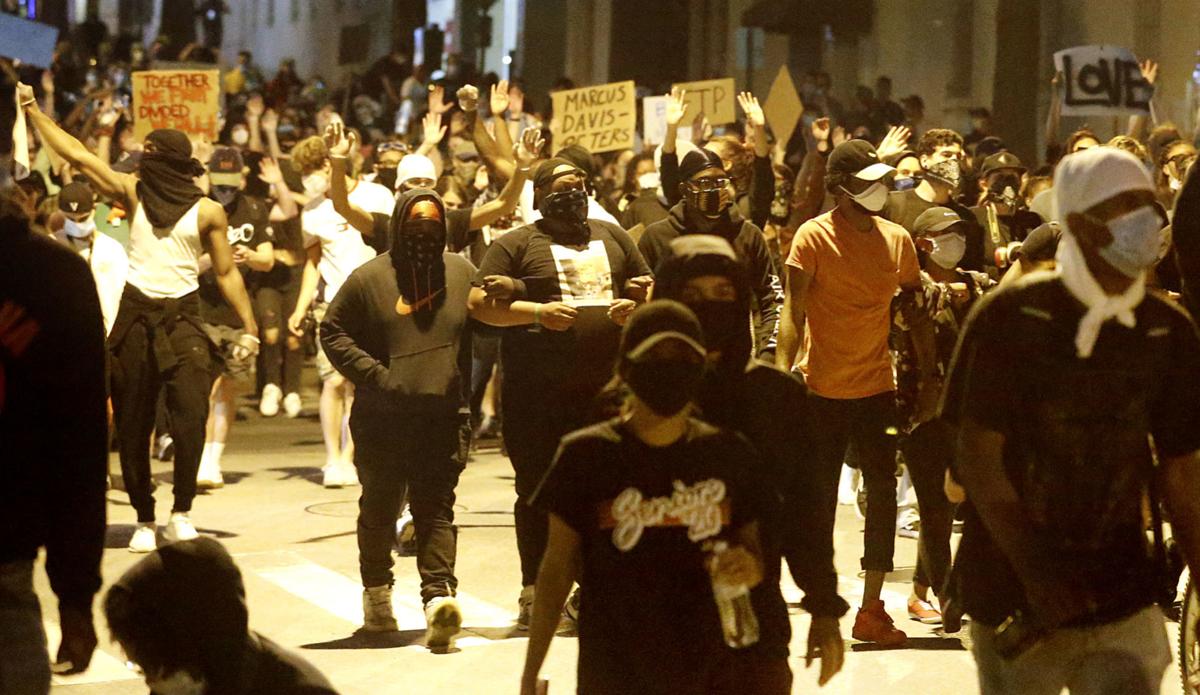 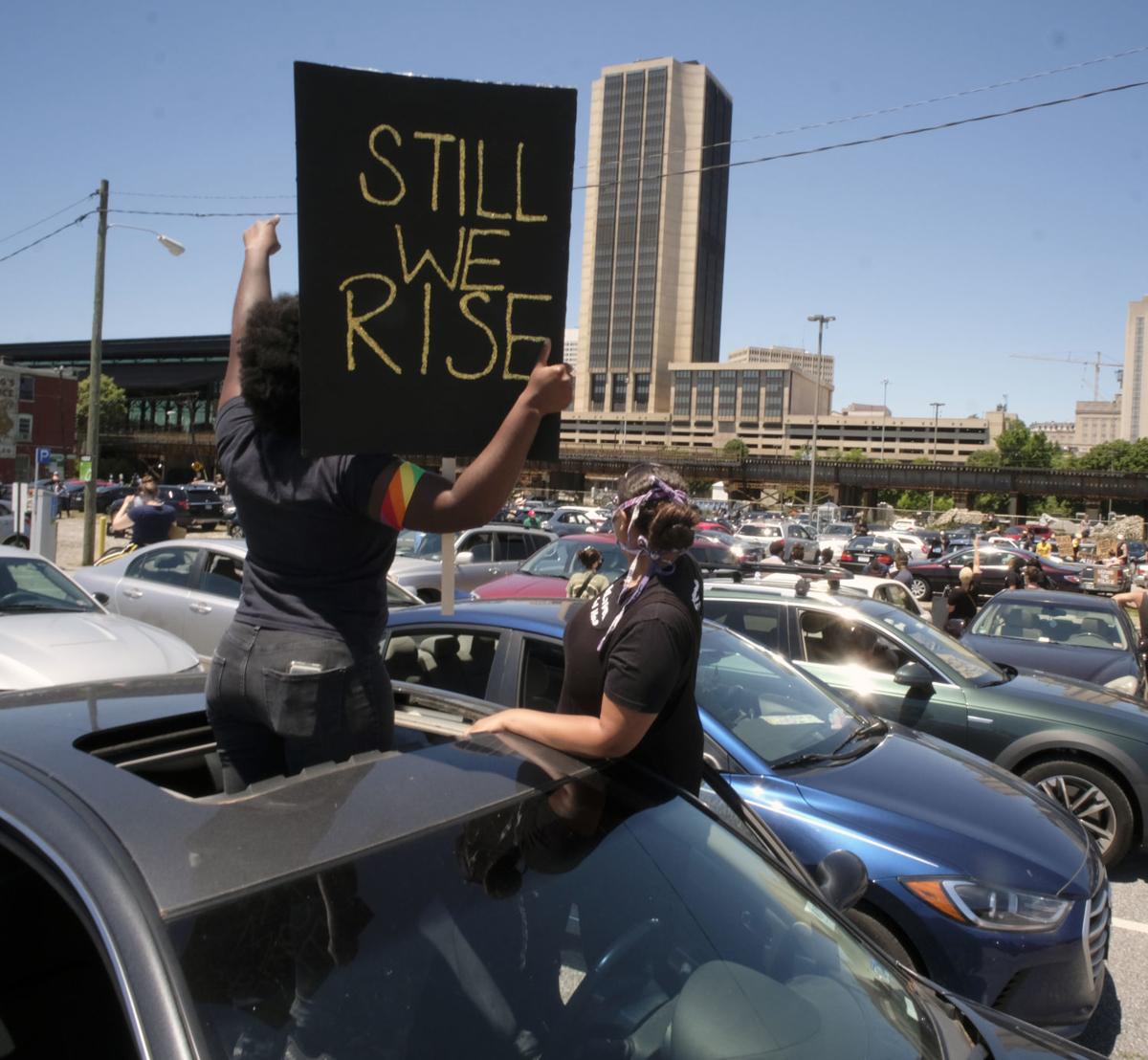 A protester holds up a sign at the Justice for Black Lives car rally in the Shockoe Bottom section of Richmond on Sunday.

Heaven knows sports aren’t perfect. They can be corrupt, criminal and shallow, much like humanity at large.

Still, competition offers many blessings, and diversity is among them, particularly at the team level. Locker rooms aren’t necessarily beacons of racial tolerance, and minorities remain underrepresented in coaching and administration, but sports unify more often than they divide.

So the collective outrage of athletes, coaches and administrators over the police brutality that killed George Floyd in Minneapolis, their pain at the subsequent violence in the streets, and their acknowledgement of our ageless stain, is not surprising.

Stick to sports? Spare me.

Stadiums and arenas and locker rooms need to be life classrooms, now more than ever.

George Floyd. Breonna Taylor. Ahmaud Arbery. Remember their names. Ponder their senseless deaths. If you can stomach them, watch the videos. The sheer volume of horror is overwhelming.

With pockets of our nation erupting, including Richmond, scores have been eloquent — with words and deeds.

Rapper Killer Mike spoke from the heart in Atlanta, and Houston Police Chief Art Acevedo wrote a thoughtful op-ed in the Washington Post. Chris Swanson, a county sheriff in Michigan, removed his helmet, dropped his baton and walked alongside peaceful protesters.

Just plain folks, of all races and ages, demonstrated calmly, restocked food pantries and cleaned up rubble left by looters and outside provocateurs. Pastors nationwide urged selflessness and prayed for harmony.

Our pastor quoted slain civil rights leader Martin Luther King Jr.: “Returning hate for hate multiplies hate, adding deeper darkness to a night already devoid of stars. Darkness cannot drive out darkness; only light can do that. Hate cannot drive out hate; only love can do that.”

The sports community, near and far, was quick to join the chorus.

“I have no way of fully understanding the fear, pain and anger members of the black community at UVA and all over the world are feeling right now,” Mendenhall said on Twitter. “But that doesn’t absolve me, or anyone else, from our responsibility to be honest about the world around us and to use our influence to drive positive change.”

In a Twitter thread Thursday afternoon, Moton revealed for the first time, in painful detail, a harrowing experience he had with police in 2005. Among those who commented was former Virginia basketball athlete Junior Burrough, who relayed a similar encounter.

No one has the wisdom market cornered, mind you. What’s essential is that people are thinking and speaking.

As a child of the ‘60s, I think back to 1967, when our family vacation to Detroit was canceled by race riots. One year later, assassins took King and Sen. Robert F. Kennedy, and protests outside the Democratic National Convention in Chicago turned violent.

Former NBA player Devean George is a Minneapolis native and businessman, and his reaction to Floyd’s death was hauntingly stark.

“It’s a shock to some people,” George said Monday on ESPN Radio’s Golic and Wingo. “To me, it’s not.”

It’s ugly and depressing, and no amount of words will salve the wounds. Only relentless action from each of us will foster our healing.

Sports need to be a model, and here’s one example.

VCU last year partnered with Game Changer, a California-based nonprofit that aims to bring law enforcement and communities together through sports. In February, police from VCU, Richmond and Henrico County met with citizens, including five Rams athletes, and afterward the group attended VCU’s basketball game versus Dayton.

The program reminded me of a 2012 conversation I had with former Virginia Tech football player Nathaniel Adibi when he joined the police force in his native Hampton. Adibi has since became a Bureau of Alcohol, Tobacco, Firearms and Explosives special agent in Texas, but his sentiment resonates.

“There is this gap I’d like to bridge between the police department and the young,” Adibi said.

Kareem Abdul-Jabbar is the NBA’s career scoring leader, and at age 73, he grasps the struggle more than most. Framed by experience and intellect, his words are a fitting close.

“I don’t want to see stores looted or even buildings burn,” Abdul-Jabbar wrote in the Los Angeles Times. “But African-Americans have been living in a burning building for many years, choking on the smoke as the flames burn closer and closer.

“Racism in America is like dust in the air. It seems invisible — even if you’re choking on it — until you let the sun in. Then you see it’s everywhere. As long as we keep shining that light, we have a chance of cleaning it wherever it lands. But we have to stay vigilant, because it’s always still in the air.”

Jerry Lindquist's Sports Memories: Remembering the sports that were at William & Mary

UVA opens season with another victory over Duke

Virginia’s defense forced six turnovers as the Cavaliers opened the 2020 college football season with a 38-20 win over Duke, their sixth straight defeat of the Blue Devils.

W&M will take a step back, engage in deeper discussions about sports cuts, 'core conflict'

William & Mary during the next month will step back and engage in discussions about the soul of its athletic program.

The University of Richmond’s Chris Mooney is a Philadelphia native who has often recruited that area through 16 years as Spiders’ basketball coach.

CHARLOTTESVILLE – Season openers in college football can often set a tone for the entire year. Virginia would be just fine with that.

The sports reduction felt at William & Mary is also impacting an A-10 school, La Salle.

Back at UR, where he started, impact of revered football assistant Jeff Hanson continues

As a University of Richmond freshman football player in 1993, Shawn Barber nearly failed out. A UR defensive assistant, Jeff Hanson, brought B…

It’s fair to assume that Justin Hamilton hasn’t gotten much sleep over the past week.

A protester holds up a sign at the Justice for Black Lives car rally in the Shockoe Bottom section of Richmond on Sunday.