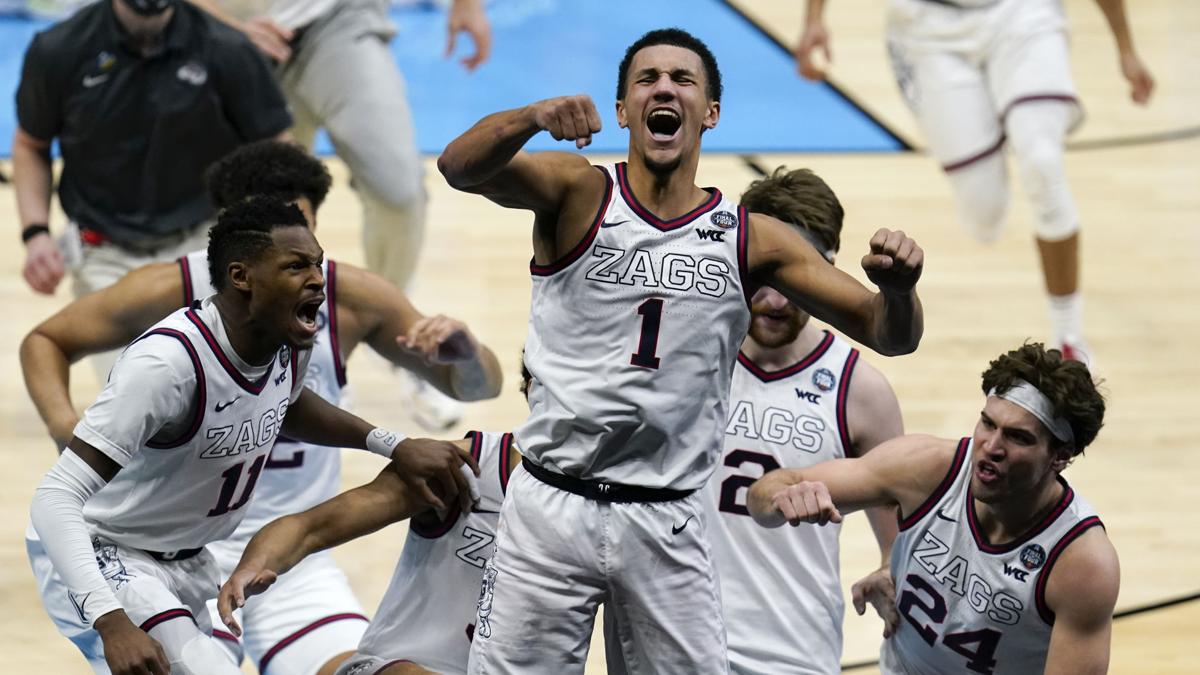 Gonzaga guard Jalen Suggs made what was immediately hailed as one of the greatest shots in the history of the NCAA tournament, drawing comparisons to Christian Laettner’s basket against Kentucky in the 1992 regional final, and Mamadi Diakite’s buzzer-beater against Purdue in the 2019 Elite Eight. 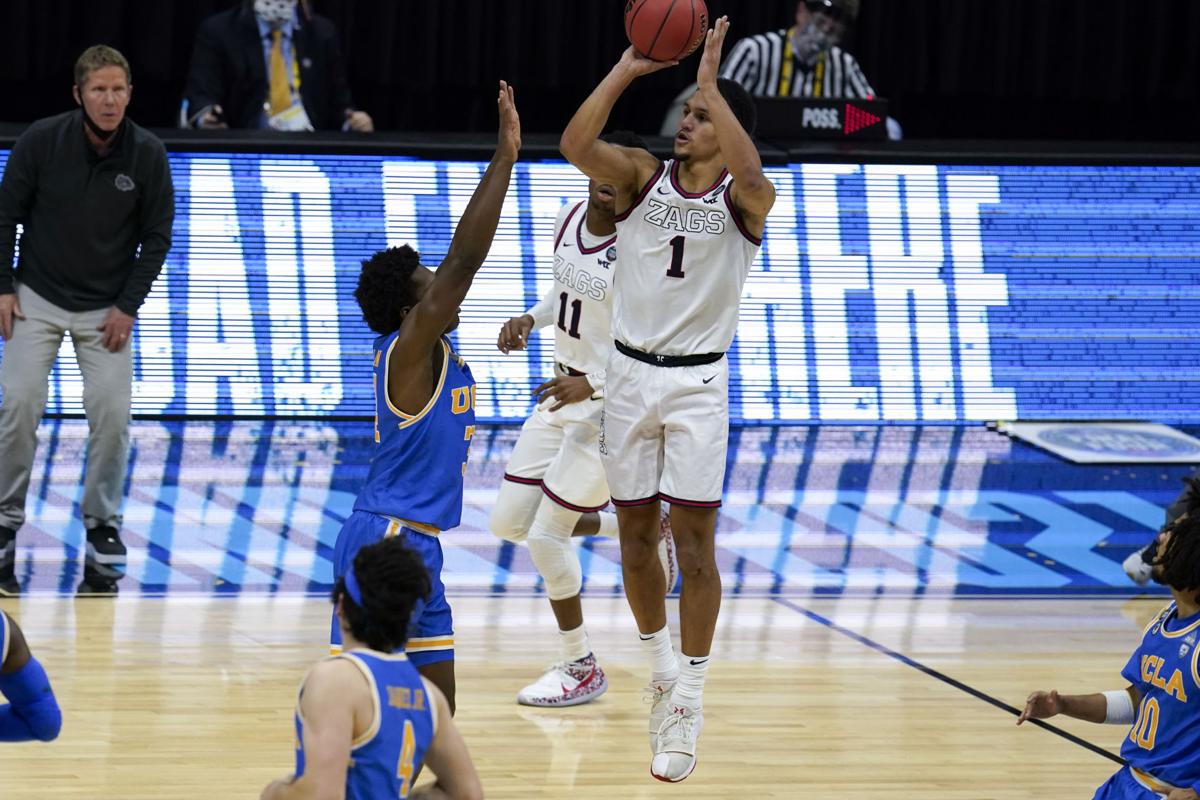 Gonzaga guard Jalen Suggs shoots over UCLA guard David Singleton, just seconds after the Bruins made a shot that tied the game at the end of the overtime period. 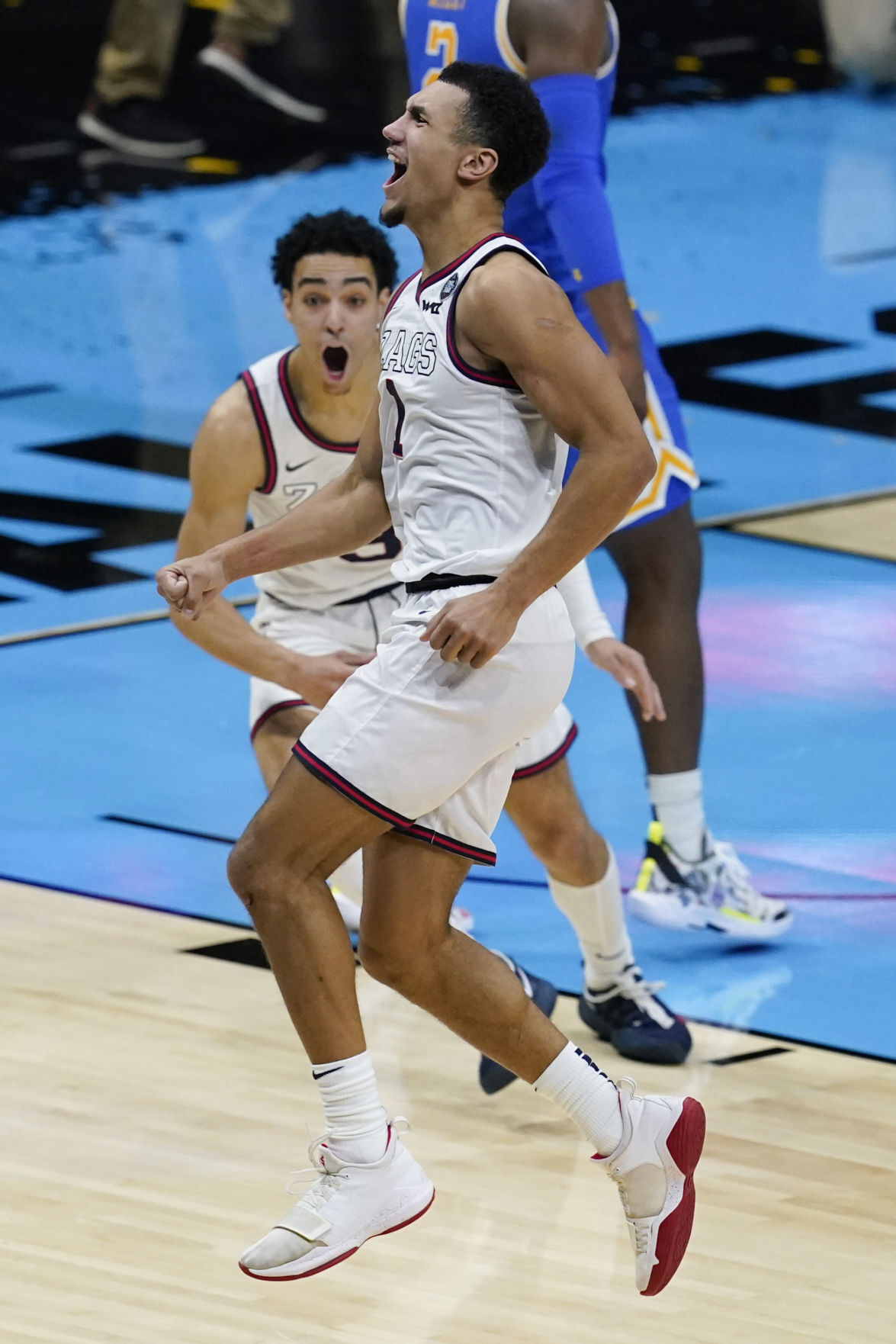 Both games went to overtime. Both were settled in the frantic final seconds.

Given the high stakes, sublime quality and exhausting drama, Duke’s 104-103 conquest of Kentucky in the 1992 Elite Eight is widely regarded as college basketball’s greatest game.

The Bulldogs and Bruins traded the lead 19 times and shot a combined 58.2% from the field, the highest accuracy at the Final Four since Villanova and Georgetown (63%) in the 1985 title contest.

UCLA owns a record 11 tournament championships, but this marked the Bruins’ first Final Four in 13 years, their second-longest drought since John Wooden’s dynasty of the 1960s and ‘70s. Such pedigree made them compelling foils for Gonzaga, seeking to become the first undefeated national champion since Indiana in 1976.

Flash back to ’92. Duke and Kentucky shot a combined 60.2%, the Blue Devils chasing college basketball’s first repeat title since UCLA in 1973, the Wildcats back on center stage after missing three consecutive NCAA tournaments, in part because of sanctions, for the first time in half a century.

Sean Woods’ contested bank shot in the lane gave Kentucky a 103-102 lead with 2.1 seconds remaining in overtime. But Laettner’s turnaround 16-footer at the horn, off a long inbounds pass from Grant Hill, traumatized the Bluegrass, sent the game into sporting lore and propelled Duke to its fifth straight Final Four and second consecutive championship.

‘Twas arguably the tournament’s most indelible buzzer-beater, recounted and replayed more than Lorenzo Charles’ dunk that lifted N.C. State over Houston in the 1983 title clash.

Several last-second shots since have rescued or elevated eventual champions.

UCLA’s Tyus Edney went coast to coast against Missouri in 1995’s second round, and Kansas’ Mario Chalmers forced OT against Memphis in the 2008 final with a 3-pointer. Villanova’s Kris Jenkins slayed North Carolina at the horn of the 2016 final, also with a 3, and Luke Maye sent the Tar Heels back to the Final Four a year later with a short jumper to topple Kentucky.

Suggs joined that company Saturday with a 40-foot jumper off glass as overtime expired, the shot more implausible and difficult than any of the aforementioned. Like Tiger Woods chasing a clutch putt, Suggs raced toward the target, confident his dagger was true.

A freshman point guard from Minnesota, Suggs was the state’s Mr. Basketball and Mr. Football, and before this, he considered a sectional football championship in high school his greatest sports moment.

Saturday “skyrockets above that,” Suggs said during his postgame Zoom. “I mean, it was nuts. And I still can’t speak. I have so many things going on in my head. I just can’t believe that happened.”

Gonzaga (31-0) was the first team since Connecticut in 2004 to win each of its first four NCAA tournament games by at least 15 points. Moreover, the Bulldogs had played only one contest all season decided by single digits, that back on Dec. 2 against West Virginia, also in Indianapolis.

“We haven’t had many games like this,” Gonzaga coach Mark Few said, “but we worked on it a lot. We worked probably work on more end-game situations this year than I ever have just because I knew we needed that. And [Suggs] makes shots — he’s got that magical aura. He makes them in practice all the time.

“It’s been crazy this year how many he’s made in practice — last-second shots. I felt pretty good. I was staring right at it. And I said, ‘It’s in.’ And it was.”

Like millions of us watching on television, Few also marveled at an equally outrageous sequence the 6-foot-4 Suggs authored late in regulation. He blocked an attempted dunk by 6-9 Cody Riley, grabbed the rebound, raced up the floor and threaded a long bounce pass to Drew Timme for a dunk.

“The beauty of Jalen is he does make plays like that, and has made plays like that defensively, where he comes down and blocks bigs because he’s so athletic and he’s so tough and he’s not afraid,” Few said. “He’s not afraid to try. And that’s absolutely what he brings to our team, is just this fearless attacking, very confident player with a great feel for the game.”

“I knew Coach was maybe a little [irritated] that I made the pass,” Suggs said, “but it got through. Drew made a great catch, finished it off. That was a huge play.”

Suggs, Timme and Joel Ayayi were exceptional, and they needed to be against Johnny Juzang, Tyger Campbell and Riley. Just like Laettner, Thomas Hill and Grant Hill (a member of CBS’ broadcast team Saturday) needed to be against Sean Woods, Jamal Mashburn and Dale Brown.

Gonzaga is the first undefeated team to reach an NCAA final since Larry Bird and Indiana State in 1979, and Monday’s title clash against 27-2 Baylor — the teams’ regular-season encounter in Indianapolis was scrubbed by COVID-19 — matches the record for fewest combined losses between tournament finalists.

So did Gonzaga-UCLA surpass Duke-Kentucky? I lean no: If Suggs misses, the game extends to double-overtime; if Laettner misses, Duke loses.

Regardless, a season and tournament unsettled by a global pandemic found sheer brilliance late Saturday night.

“When dreams start to become realities, and you’re able to experience those things, it’s special,” Suggs said. “And those are things you’ve got to cherish.”

Gonzaga guard Jalen Suggs made what was immediately hailed as one of the greatest shots in the history of the NCAA tournament, drawing comparisons to Christian Laettner’s basket against Kentucky in the 1992 regional final, and Mamadi Diakite’s buzzer-beater against Purdue in the 2019 Elite Eight.

Gonzaga guard Jalen Suggs shoots over UCLA guard David Singleton, just seconds after the Bruins made a shot that tied the game at the end of the overtime period.