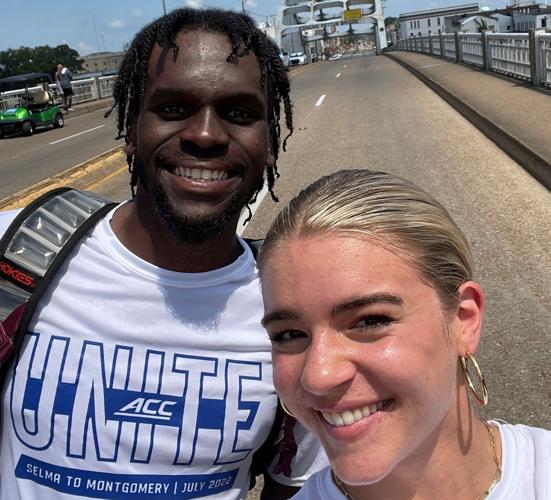 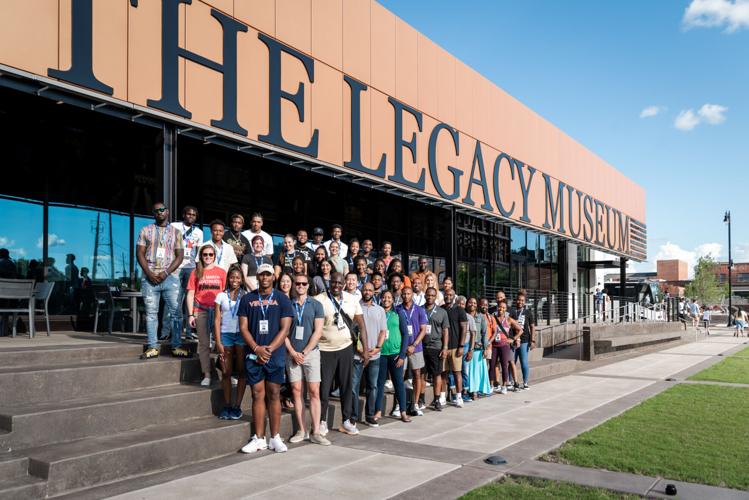 ACC athletes and administrators toured The Legacy Museum in Montgomery, Ala. 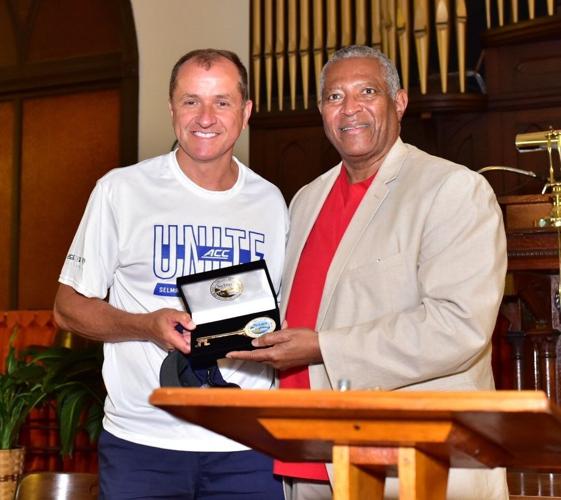 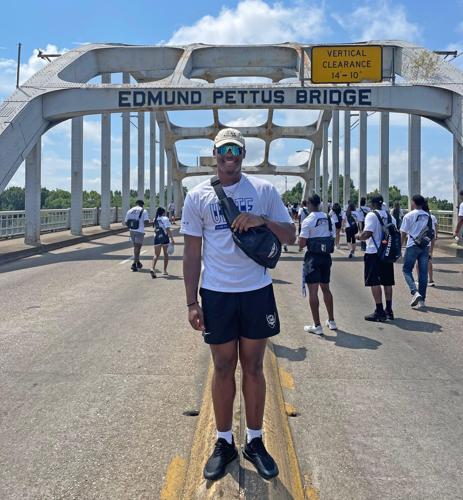 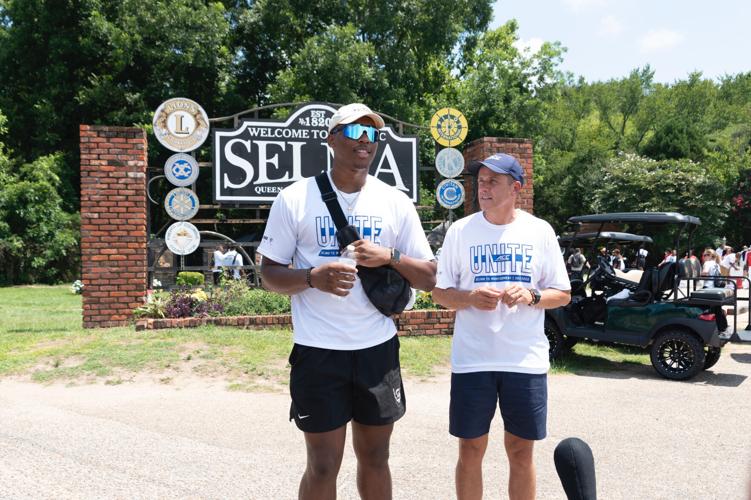 We interrupt another summer of realignment angst and NIL confusion with a stirring reminder of the inherent good in college sports.

This has nothing to do with athletes training, competing and excelling. No, this is far better and more important.

This is about a group of athletes, already among the brightest and most engaged students on their respective campuses, gathering last month in Alabama to explore and absorb the history of our nation’s civil rights movement.

“Going into college, I always thought of the ACC, Pac-12 and Big Ten as sporting associations, sporting conferences,” Virginia football player Josh Rawlings said. “For them to do something like this ... means the world to the athletes. ... This is going to benefit us for the rest of our lives.”

“We’re still kind of fighting this battle,” Virginia Tech middle-distance runner Dave Whitfield said. “It looked a lot different back [in the ’60s], and we’ve made progress, but it’s still not enough.”

“You can hear all these stories ... and watch all these movies that recreate these events,” Pittsburgh track athlete Daishon Spann said, “but it’s so much more powerful to go on-site and hear first-hand from [the principals]. It really opened my eyes. ...

“It brings more humanity to the situation and more emotion. A lot of times, especially how news is portrayed nowadays, they kind of force-feed it to you and you become desensitized. We don’t want that, especially when we’re fighting for so many different communities to be represented equally in America.”

Spann, Whitfield, Rawlings and UVA women’s basketball player Carole Miller were among 50-plus ACC athletes and administrators who, along with peers from the Big Ten and Pac-12, traveled to Montgomery and Selma, Ala., cities central to Black Americans’ peaceful quest for voting equality in 1965.

The groups sat in Selma’s First Baptist Church, where Martin Luther King Jr., Ralph Abernathy and other icons once preached. They walked across Selma’s Edmund Pettus Bridge, site of the infamous Bloody Sunday attacks that outraged the world.

In Montgomery, they toured the Civil Rights Memorial Center, the Legacy Museum and Alabama State University’s Interpretive Center, landmarks that honor the legions who throughout our history have marched and/or died in pursuit of basic human rights.

Most powerful and inspiring, the athletes and administrators heard from author/activists Lynda Blackmon Lowery and Sheyann Webb-Christburg.

Lynda Blackmon, then 15 years old, was among those who on March 7, 1965, aka Bloody Sunday, began to walk from Selma to the state capital of Montgomery. But at the Pettus Bridge, named for a U.S. Senator and leader of Alabama’s Ku Klux Klan, the marchers encountered violent resistance from sheriffs and state police — Blackmon needed 35 stitches to close her head wounds.

Sheyann Webb, then 9, is believed to have been the day’s youngest participant, and Dr. King called her “the smallest freedom fighter.” She is featured in the 1987 PBS documentary “Eyes on the Prize.”

“Watching the documentary the night before and then marching [to Pettus Bridge], it was amazing,” said Rawlings, who visited Selma in 2017 with family. “I’m actually able to appreciate [now] what that bridge means, not only to Alabama but for our country.”

The visiting athletes, many of them African American, had a police escort as they walked from First Baptist Church to the bridge, rich irony not lost in the moment.

“I was just walking around trying to soak it all in,” Whitfield said. “And just the sirens — I tried to separate the vision from the sound. Like, how would those marchers have felt [hearing] sirens in their time?”

But regardless of career path, each said the Alabama trip heightened their civic ambitions and reminded them that young people’s voices are essential to America’s growth.

These personal meditations, plus the opportunities to connect with peers from across the country, were invaluable.

“There were so many things I was able to take in and absorb, and I’m so appreciative,” Rawlings said. “... The experience they gave us, the level of understanding we [now] have, that’s what I wish to give to other people. Because it’s so much more than just Martin Luther King and ‘I Have a Dream.’

“I’m almost 21, and I don’t know if I would have had the gumption or had the integrity to go do what they did. ... Weeks, months, years, they were at it relentlessly. They didn’t stop until change actually came.”

Indeed, eight days after Bloody Sunday, President Lyndon Johnson spoke on national television in support of the marchers, and on March 21, approximately 2,000 people began an unimpeded, four-day trek from Selma to Montgomery.

On Aug. 6, Johnson signed the Voting Rights Act, outlawing the discriminatory voting practices that were especially prevalent in the South.

ACC commissioner Jim Phillips shared in the weekend, received a key to the city from Selma Mayor James Perkins and, most rewarding to him, interacted with the athletes.

“That was the most comforting thing, to be around all the kids and to see how respectful they were about what they were experiencing,” Phillips said. “It was emotional, it was powerful, it was inspiring and educational. It was all of that.”

“Hearing [administrators] talk about how this experience really opened up their eyes and moved them — that was really important for me,” she said. “This happened less than 100 years ago, and they really didn’t know the extent of everything that went down. I’m very happy that [they] are able to spread that knowledge and also start making a difference now in the positions they have.”

The difference freedom fighters made during the 1960s endures in ways they never could have imagined.

“I wouldn’t be here, at the University of Virginia, getting this great education and playing this level of football without the events that happened in Selma, Alabama, in 1965,” Rawlings said. “If you take that away, I don’t know what today would look like.”

Kick off the month of August with a moonlit bike ride, two stand-up comedians, a beer festival, and punk rock at the James River.

A Times-Dispatch analysis of state crime data shows the number of murders and non-negligent manslaughter killings soared in 2020 to the highest level since 1994.

What's next for Manchester high-rise plan that may block skyline views?

A Richmond councilwoman said more neighborhood feedback is being sought about a proposed Manchester high-rise that some nearby property owners say is out of place and will harm their skyline views.

ACC athletes and administrators toured The Legacy Museum in Montgomery, Ala.