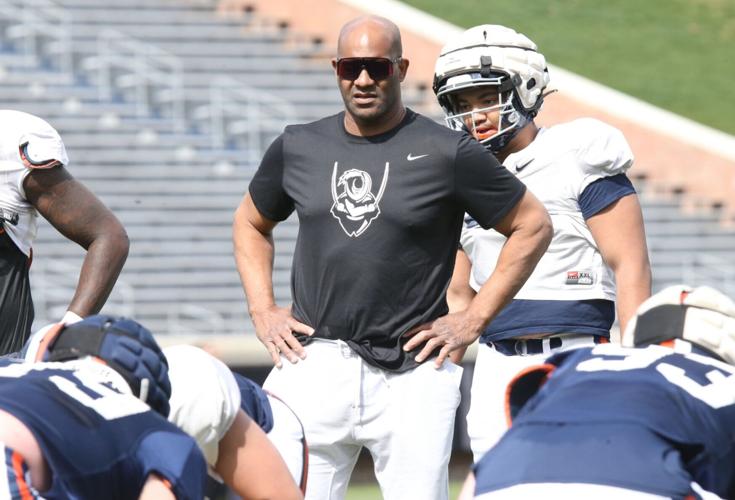 Former UVA All-American Chris Slade is in his first season as the defensive ends coach at his alma mater. 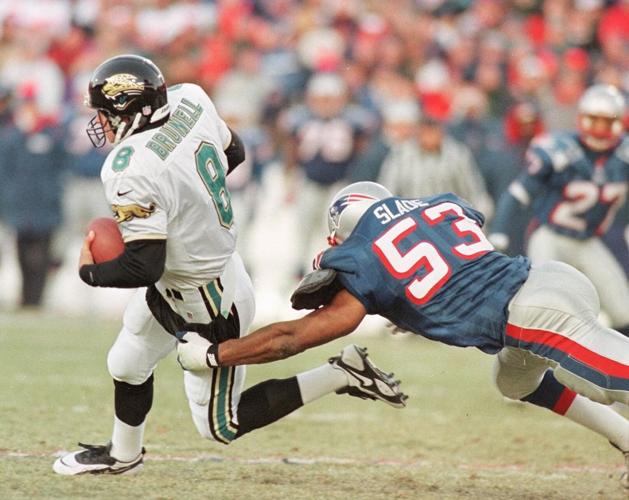 New England’s Chris Slade dove after Jacksonville quarterback Mark Brunell during the AFC championship game in January 1997. Despite being coached by figures such as Bill Belichick, Slade says he turns to Al Groh for his most pressing football questions. 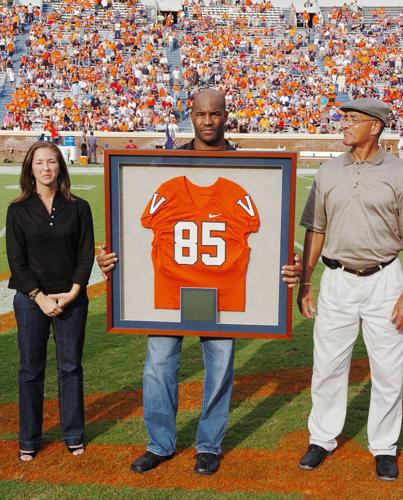 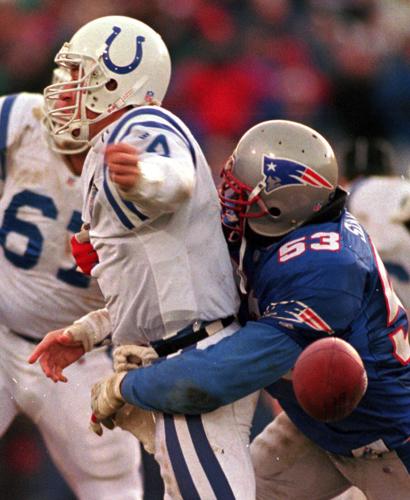 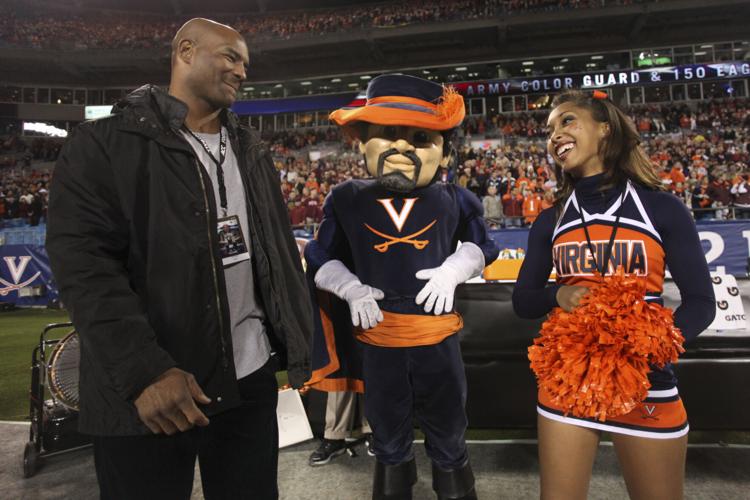 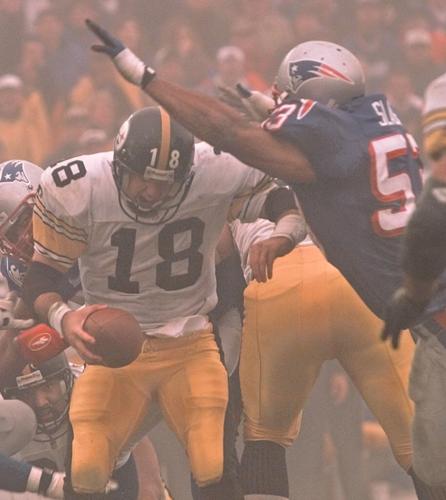 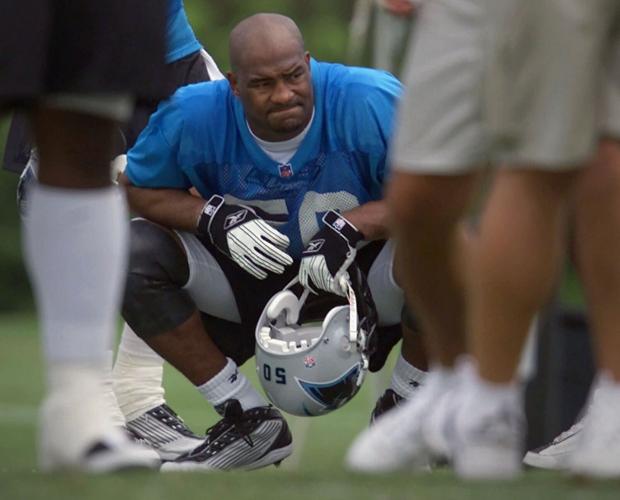 As an All-American at Virginia and a Pro Bowler with the New England Patriots, Chris Slade played for revered coaches such as George Welsh, Bill Parcells, Pete Carroll and Bill Belichick. But Slade, UVA’s rookie defensive ends coach, patterns his teaching after another mentor.

“That’s easy,” Slade said of his coaching role model. “Groh. Al Groh. And I’ve had the good fortune to play for Parcells and Belichick, Pete Carroll and of course the legend here, Coach Welsh, but I mean Al Groh was my guy. I learned — that guy, he has a wealth of football knowledge. ...

“Whenever it’s a football question that comes up, I’d always call him, even when I was coaching high school ball. Just try to get his suggestions, pick his brains. I think that’s the only guy I can ask about any phase of football, and he has an answer, and a good answer, and a reason why.”

Similarly, few if any are more enthused than Groh about Slade’s Cavaliers homecoming. Indeed, the pride in Groh’s voice as we discussed Slade last week was more parental than professional.

And make no mistake, Groh, a UVA graduate and former head coach at Wake Forest, the New York Jets and Virginia, is a football dad.

His son Mike, a former Cavaliers quarterback, coached the receivers on the Philadelphia Eagles’ 2017 Super Bowl champs and just joined the New York Giants in the same position. His son Matthew has worked for the Patriots since 2011, a tenure that includes three Super Bowl victories, and he was recently promoted to director of player personnel.

Slade is like another son, and Groh offered counsel as Slade considered resigning as head coach at Pace Academy in Atlanta to join Tony Elliott’s Virginia staff. Elliott is a first-time head coach, but as a Clemson assistant, he recruited several Pace players, bonding with Slade in the process.

“I didn’t come back to UVA because it’s UVA and it’s comfortable and I know everything and everybody,” Slade said. “I came back here because I felt like he’s the right guy for me to come back here and work for. It just so happens it’s UVA, so it all worked out great. I think I would have followed that guy anywhere besides Blacksburg [Virginia Tech]. That’s the only place I wouldn’t have followed him to. I wouldn’t coach there. I couldn’t sell my soul.”

Slade has long radiated such passion, for life and football, and Groh noticed that trait immediately.

Then a Cleveland Browns assistant under Belichick, Groh initially coached Slade at the 1993 Senior Bowl. Slade and Mike Groh were Virginia teammates in ’92, but the Senior Bowl was Al Groh’s first extended interaction with Slade.

Weeks later, Al Groh left the Browns to serve as the Patriots’ defensive coordinator and linebackers coach under Parcells. With the 31st overall pick of the NFL draft, New England selected Slade, then and now the ACC’s career sacks leader, with 40.

“Right from the very start he was an absolute pleasure to coach,” Groh said, “because he had, and continues to have, such a joy and energy for the game. He loved practice. He loved to lift weights. He loved to play in the games. ... When you have a few players on your team like that, they set the standard. ...

“He was a confident player, but he was also a striving player. He had a terrific combination of confidence and humility, the humility to learn, to be accountable. He took positive reinforcement and constructive criticism.”

In Slade’s second season, the Patriots made the playoffs. In his fourth, they reached the Super Bowl.

“Coach Groh had a unique way of making things simple,” Slade said, “just how he explained things. ... It was just a gift. I wasn’t the smartest guy in the room always, but even for me, I could understand the way he would teach things. It resonated, and I was able to carry it over to high school and now here in college.”

The longer Slade played, the more he leaned on Groh’s teachings, even after Groh followed Parcells to the Jets in 1997. The crux of those lessons was that speed, strength and quickness can carry an athlete only so far. What differentiates the competent from the excellent are preparation, technique, effort and toughness.

Slade carried that approach to Pace Academy, where he worked for a decade, guiding his team to the 2015 AA Georgia state championship. He knew the feeling well, having teamed with his cousin Terry Kirby at Tabb High School to win the 1987 Group AA, Division 4 Virginia state title.

Groh is so invested in Slade that when a broadcasting assignment took him to Atlanta, he attended a Pace game to watch his protégé coach.

As a Virginia native and Cavaliers icon — UVA went 33-14-1 during his playing career — Slade figures to be an effective recruiter, particularly in Hampton Roads and Georgia. But Groh most looks forward to what Slade will bring to the Cavaliers’ defensive ends.

“He now gets to unpack some things he wasn’t able to teach to high school players,” Groh said. “He now has a higher level of classroom. ... He’ll teach them how to prepare like a pro, and sometimes only a guy that’s been a pro can teach that.”

Chico Bennett, a transfer from Georgia Tech, has noticed Slade’s attention to detail and technique throughout spring practice, how he teaches hand extension, body position and leverage. He even teases that Slade’s highlight videos may be in black-and-white.

Slade laughs at the hazing.

“You know what I told Chico?” he said. “Go back and look at that black-and-white film. You might could learn a little something. If you could be half as good as that guy in black-and-white, you’d be OK.”

Joking aside, a difficult task for an accomplished player-turned-coach is summoning the patience to instruct those who aren’t as gifted.

“It can be challenging at times because everybody has their own skill set,” Slade said, “and that’s part of being a good coach. ... You can’t get mad at a player if they just can’t do it. ... You gotta figure out what they can do.

“They all can do something good, and as a coach, it’s our responsibility to figure out what they’re good at. I’ve just had to really slow down and teach these guys the fundamentals. ... And so, I’m trying to earn their trust, and vice versa.”

Just as he and Al Groh forged a mutual and enduring trust decades ago.

Teel: Hokies plan to be as aggressive as possible with academic performance payments

When Virginia Tech launched its Drive For 25 campaign in late 2016, an effort to more than double Hokie Club membership to 25,000, athletic di…

Former UVA All-American Chris Slade is in his first season as the defensive ends coach at his alma mater.

New England’s Chris Slade dove after Jacksonville quarterback Mark Brunell during the AFC championship game in January 1997. Despite being coached by figures such as Bill Belichick, Slade says he turns to Al Groh for his most pressing football questions. 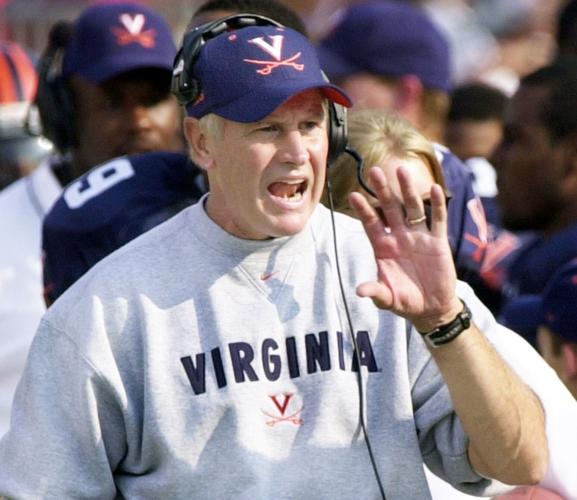