Teel: With realignment returning to college sports, how will the ACC respond?
0 Comments
Share this
1 of 2 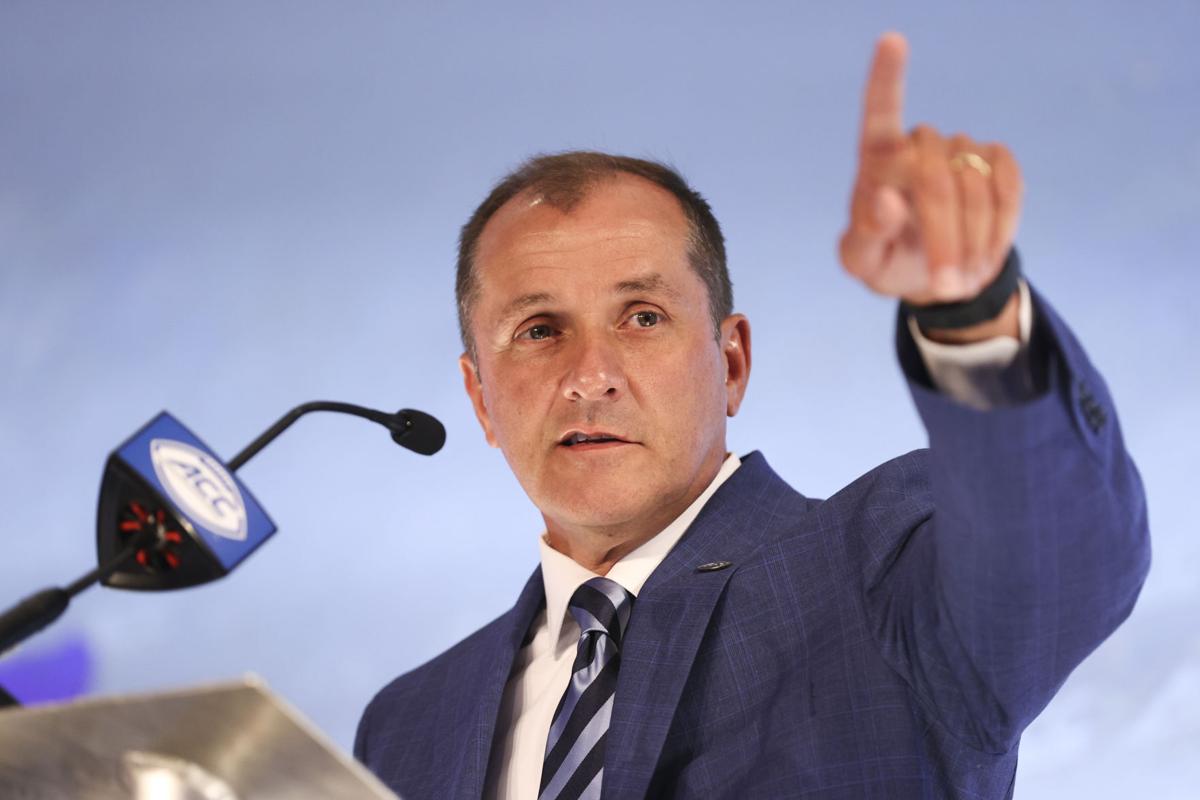 Jim Phillips took over as Atlantic Coast Conference commissioner this year, and the primary concern across the league is increasing revenue. The ACC’s average distribution ranks last among Power Five conferences. Oklahoma has been a part of the Big 12 Conference since its foundation in 1994, but that relationship appears to be coming to an end. Oklahoma and Texas are set to join the SEC, which could spur more movement elsewhere. 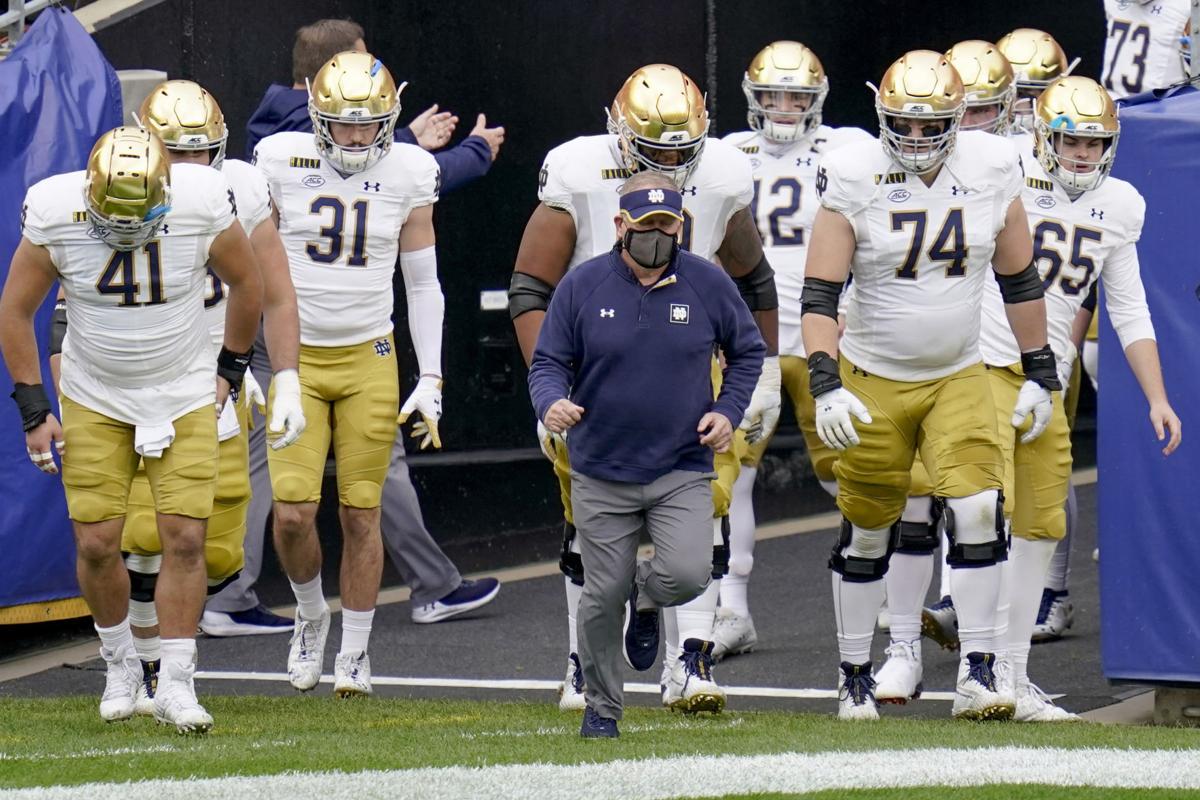 Notre Dame coach Brian Kelly (center) and the Fighting Irish had ACC football affiliation in the pandemic-affected 2020 season. If the ACC could make Notre Dame a permanent football member, it would be a financial windfall for the league.

John Swofford succeeded Corrigan in 1997. Six years later, the nine-team league voted to add Virginia Tech and Miami of the Big East, igniting an expansion wave that today finds the ACC with 14 football schools, plus Notre Dame for other sports.

Jim Phillips inherited the commissioner’s chair from Swofford on Feb. 1. His administration may not wait as long to alter the conference’s footprint.

This was the case from the jump. The ACC’s revenue lags far behind the Big Ten’s and SEC’s, the gap is widening, and the most reliable path to enhancing the bottom line is expanding into markets where enough folks will pay for your content, especially football, via streaming or old school cable subscription.

The SEC’s exclusive television contract with ESPN/ABC, set to begin in 2024, already was going to increase that disparity. Bring Texas and Oklahoma into the fold, and the SEC’s revenue potential mushrooms.

Never mind that the Sooners dominate Big 12 football and have ended the last four seasons with losses to SEC teams, allowing 217 points in the process. And never mind that the Longhorns haven’t lost fewer than three games since 2009.

This isn’t about football. This is about the wealthy and powerful — Texas, Oklahoma and the SEC — craving more wealth and power.

The timing is atrocious.

College athletics faces a torrent of front-burner issues with name, image and likeness, College Football Playoff expansion, NCAA governance, the transfer portal and COVID-19 protocols. Add realignment and folks are drinking from a fire hydrant, with all the spillage you’d expect.

How the ACC, Big 12 and Pacific 12 counter — with new television deals expected in 2023, the Big Ten is poised to cash in, as constructed or otherwise — now becomes the summer and fall’s obsession.

Before even indulging in speculation about what the ACC might do, some quick history.

Texas and the ACC flirted covertly more than a decade ago. The Longhorns were exploring several options, and university president Bill Powers, accompanied by athletics director DeLoss Dodds, flew via private jet for an early evening summit with Swofford , Duke AD Kevin White and other conference officials at the Greensboro Airport Marriott, about 15 miles from ACC headquarters. But Texas elected to go all in with the Big 12 and Longhorn Network — until now.

No one, including Phillips, knows exactly how the ACC will proceed, but there are options aplenty, some that hinge on external factors.

Phillips has said that football “eats first” and understands that adding Notre Dame football would be a financial windfall for the ACC and the Fighting Irish. As conferences scrambled to schedule last season during the pandemic, Notre Dame joined the ACC for a year, played in the league championship game, qualified for the playoff and placed five players on the first all-conference team.

Moreover, any 15th football member, particularly the Irish, would not require a 16th. All you need do is scrap divisions, assign each program two annual opponents and rotate the other 12 conference rivals every other season.

In unveiling the 12-team CFP expansion proposal last month, Notre Dame AD Jack Swarbrick said the model further entrenched the school in football independence. But is September approval of a 12-team bracket by the playoff’s board of managers a fait accompli? Would the status quo of four teams or expansion to six or eight change the Irish’s thinking?

Players and coaches at the ACC Kickoff gave the 12-team plan mixed reviews, most notably Clemson coach Dabo Swinney and Tigers guard Matt Bockhorst. Clemson has reached six consecutive CFPs, and its president, Jim Clements, is the ACC’s board of managers representative.

Mere hours before the Texas-Oklahoma news broke Wednesday afternoon, Phillips was asked about Notre Dame during his Kickoff presser. As a former assistant AD there and father of two current students, Phillips “gets” Notre Dame like few others.

“I think we all got a glimpse of what it would be like to have Notre Dame in the conference this past fall,” he said. “That was a really beautiful and beneficial relationship to both Notre Dame and the ACC. They had a chance to play a fantastic schedule. They had a chance to vie for a national championship and compete in the CFP. We have a real-life example of what that could look like. …

Those 14 football schools, and Notre Dame, are bound by a grant of media rights that extends through the 2035-36 academic year. So absent a settlement otherwise, any institution seeking to exit the ACC would forfeit its media rights through that date, virtually precluding the SEC and/or Big Ten from poaching.

If Notre Dame remains independent, and if the ACC can’t sway Texas and Oklahoma with an 11th-hour offer, does any available school, or pair of schools, boast the revenue potential to merit an invitation? That’s a deep dive the conference and its media partners and consultants must undertake.

Keep in mind, based on the conference’s most recent average distribution of $32.4 million, any newcomer would need to generate about $50 million in additional revenue just to bump that average by a modest $1 million.

West Virginia had fierce Big East rivalries with Pitt and Virginia Tech, Clements is a former WVU president, and Mountaineers athletic director Shane Lyons is a former associate commissioner at the ACC. In fact, Lyons was among the invited guests at a Tuesday party in Charlotte for Swofford.

Cincinnati football is rolling under Luke Fickell, and campus is an easy drive from Pitt and Louisville. But do the Bearcats wield enough clout with Ohio’s substantial TV market?

What about the Interstate 4 corridor in Florida with UCF and USF, American Athletic Conference rivals with combined undergraduate enrollments of more than 90,000? Or Texas schools such as Houston, Southern Methodist, Baylor, Texas Christian and Texas Tech?

Is major college football headed for a 16-team, or larger, SEC and a 32-team mega-conference? Would a television alliance with another Power Five league make sense for the ACC?

Is there a Power Five school outside the depleted Big 12 that might be lured in tandem with Notre Dame? Can the ACC afford to remain as is?

Conversations with various administrators the past few days yielded no definitive conclusions.

Phillips is among college athletics’ most-respected leaders, and assessments of his brief tenure have been glowing. The honeymoon ended at 4 p.m., Wednesday.

'UVa is about to do a lot of winning': Tony Elliott making a strong first impression with state's high school football coaches

Jim Phillips took over as Atlantic Coast Conference commissioner this year, and the primary concern across the league is increasing revenue. The ACC’s average distribution ranks last among Power Five conferences. Oklahoma has been a part of the Big 12 Conference since its foundation in 1994, but that relationship appears to be coming to an end. Oklahoma and Texas are set to join the SEC, which could spur more movement elsewhere.

Notre Dame coach Brian Kelly (center) and the Fighting Irish had ACC football affiliation in the pandemic-affected 2020 season. If the ACC could make Notre Dame a permanent football member, it would be a financial windfall for the league.