UVA can't summon another postseason comeback, No. 4 'Hoos fall to No. 13 Ohio
0 comments
Share this
1 of 2 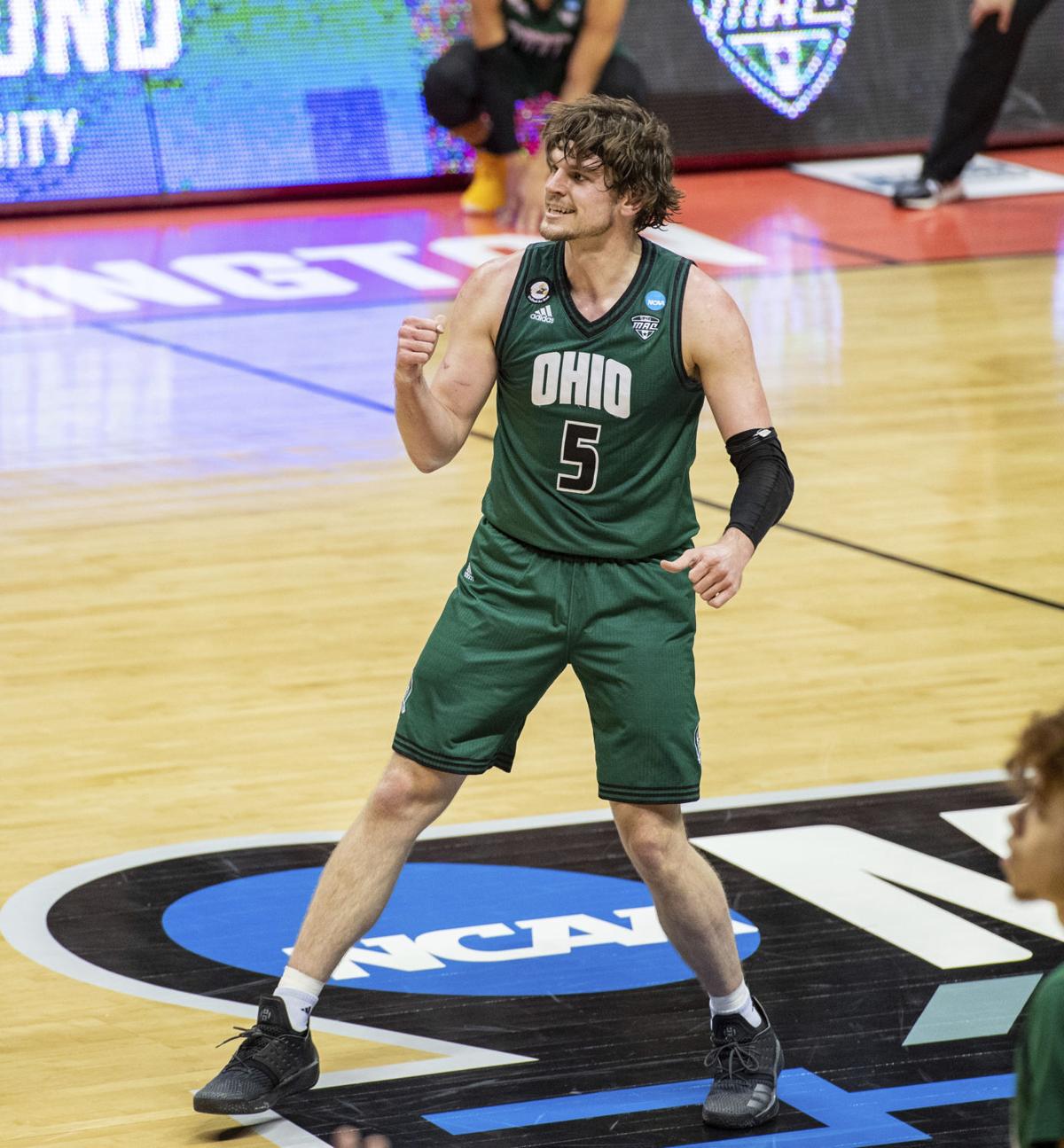 Ohio forward Ben Vander Plas (5) reacts as he scores a three-point basket as the buzzer sounds to end the first half of a first-round game against Virginia. 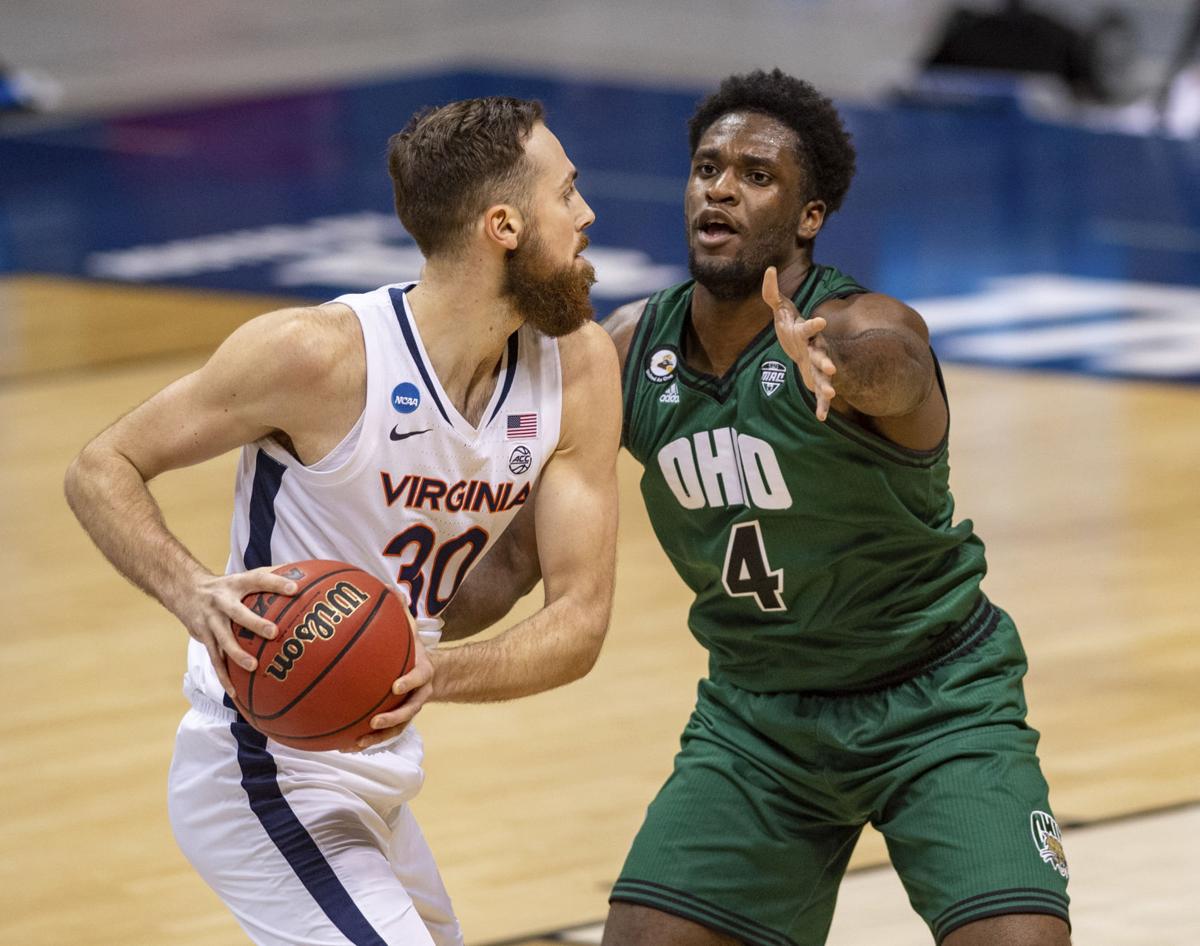 Ben Vander Plas, a junior forward, scored 17 points and helped fuel a 12-2 Bobcats run late in the second half as 13-seed Ohio upset fourth-seeded Virginia, 62-58, in the first round of the NCAA tournament at Indiana’s Assembly Hall.

“He did what his old man would do when I played with him,” said Bennett. “He made key plays. Happy for him and hurting for our guys.”

The Bobcats will face fifth-seeded Creighton on Monday, while UVA heads home.

The Cavaliers (18-7), the last team to win an NCAA championship since last year’s event was canceled due to the spread of COVID-19, almost didn’t make it to Indianapolis. After a positive test forced them out of the ACC tournament, the team had to quarantine in Charlottesville.

It couldn’t practice until Friday and couldn’t travel to Indianapolis until then, one day before it had to play.

Saturday night, it couldn’t hold off the Bobcats.

“We wanted a chance to play in this tournament and we got the chance,” said Bennett. “It just stings right now.”

Senior forward Sam Hauser, a Marquette transfer, led UVA with 15 points and nine rebounds, as the Cavaliers exited the NCAA tournament in the first round for the second time in its last three appearances.

Bennett built his Virginia basketball program on defense, believing – as his father did before him – that strong play on that end of the floor can carry a team through a plethora of other issues.

In the first half, it carried the Cavaliers to the lead, helping Virginia seemingly overcome the COVID-related absence of sophomore forward Justin McKoy, foul trouble for senior forward Jay Huff and the lack of practice time.

UVA, which has led the nation in scoring defense each of the past four seasons but came into Saturday ranked sixth in the country, held Ohio to just 27% shooting from the floor and forced five turnovers before the break.

"I thought we were sharp defensively, for the limited prep," said Bennett. "It's what we tried to do all year. I'm glad it was there. I thought we fought."

If Virginia was worried about its shooting stroke coming off a week-long COVID pause, it didn’t show in its first half shot selection. It took 15 of its first 24 shots from beyond the 3-point arc, making five of those and taking a 24-19 lead with 3:57 to play in the half.

In all, the Cavaliers shot 35.7% from the floor in the first half and finished 5 for 17 from 3-point range.

Despite the layoff, UVA didn’t show many of the signs of rust that many feared. It committed just one turnover in the first half and took a 28-27 lead to the locker room. The narrowness of that margin came courtesy of Vander Plas, who sank a 3-pointer just before the halftime horn sounded.

"He broke loose a couple times, hit a couple big ones to get his momentum going in the right direction," said Hauser, an AAU teammate of Vander Plas in high school back in Wisconsin. "He made a lot of big plays at the right time."

UVA cut Ohio’s lead to 60-58 with seven seconds to go on a 3-pointer by Trey Murphy III, but could get no closer.

The Bobcats finished the night shooting 50% in the second half.

On the court after the game, Bennett and Vander Plas spoke briefly, with the coach asking the player to show him where Vander Plas's father was seated in the stands.

"That family has meant a lot to my family over the years," said Vander Plas, who was named Ben in honor of Bennett and his father, Dick. "When we got matched up, I was really excited to play against him."

Virginia played the game without McKoy, who shared on social media Saturday night that he was the player who had tested positive for COVID-19.

The 6-foot-8, 215-pound North Carolina native McKoy is averaging 11.2 minutes per game off the bench, scoring 3.5 points and grabbing 3.3 rebounds per outing.

He had played some of his best basketball of the season of late, bringing energy off the bench for Tony Bennett’s team. McKoy averaged 17 minutes per game in the last four contests, totaling 18 points and 21 rebounds in those games.

The Cavaliers hadn’t played since beating Syracuse 72-69 on Beekman’s buzzer-beating 3-pointer on March 11 in the quarterfinals of the ACC tournament in Greensboro, N.C. After that game, a then-unnamed player tested positive for COVID-19, forcing the team to drop out of the tournament and begin quarantining to be eligible for the NCAA tournament.

Virginia had its first practice in over a week on Friday morning in Charlottesville before flying to Indianapolis. The team had to pass two rounds of COVID testing after arriving to be allowed to play Saturday night’s game.

It couldn’t get past Ohio.

Ohio forward Ben Vander Plas (5) reacts as he scores a three-point basket as the buzzer sounds to end the first half of a first-round game against Virginia.