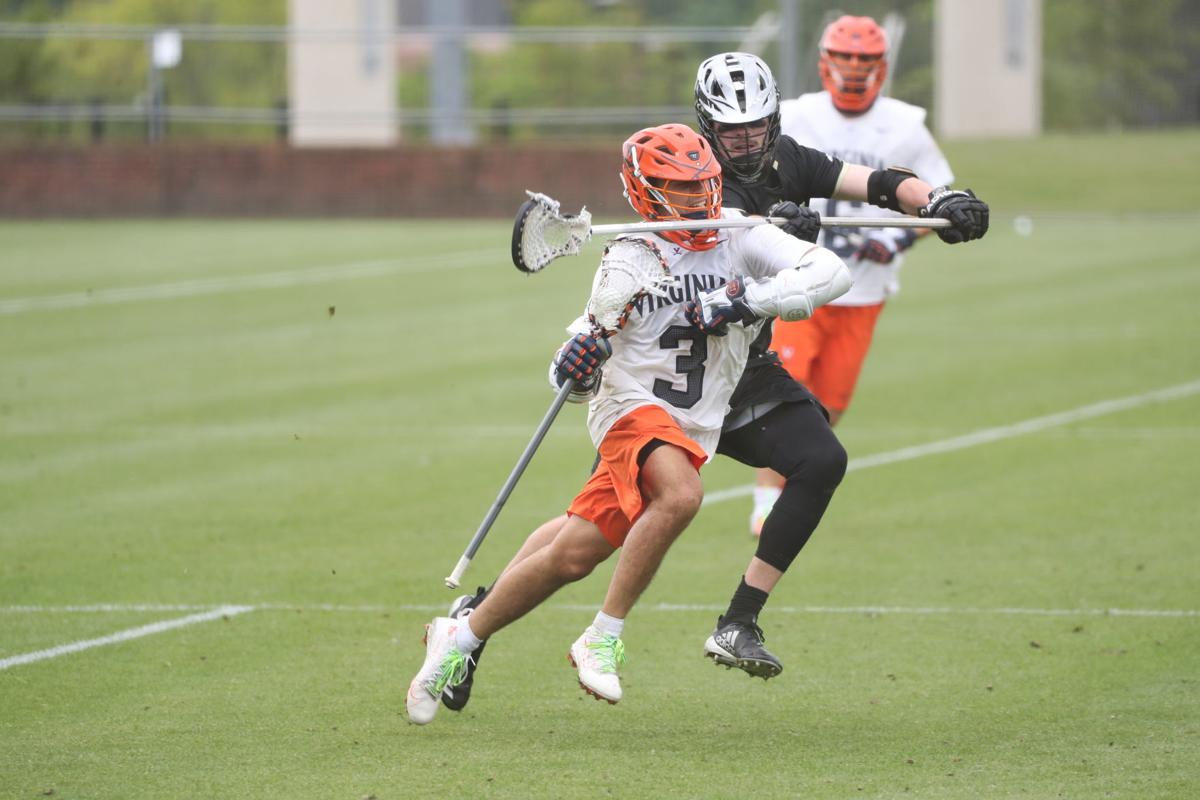 Senior Ian Laviano drives to the cage during Virginia’s first-round victory over Bryant in the NCAA men’s lacrosse tournament. Laviano scored the game-winning goal in the fourth quarter. 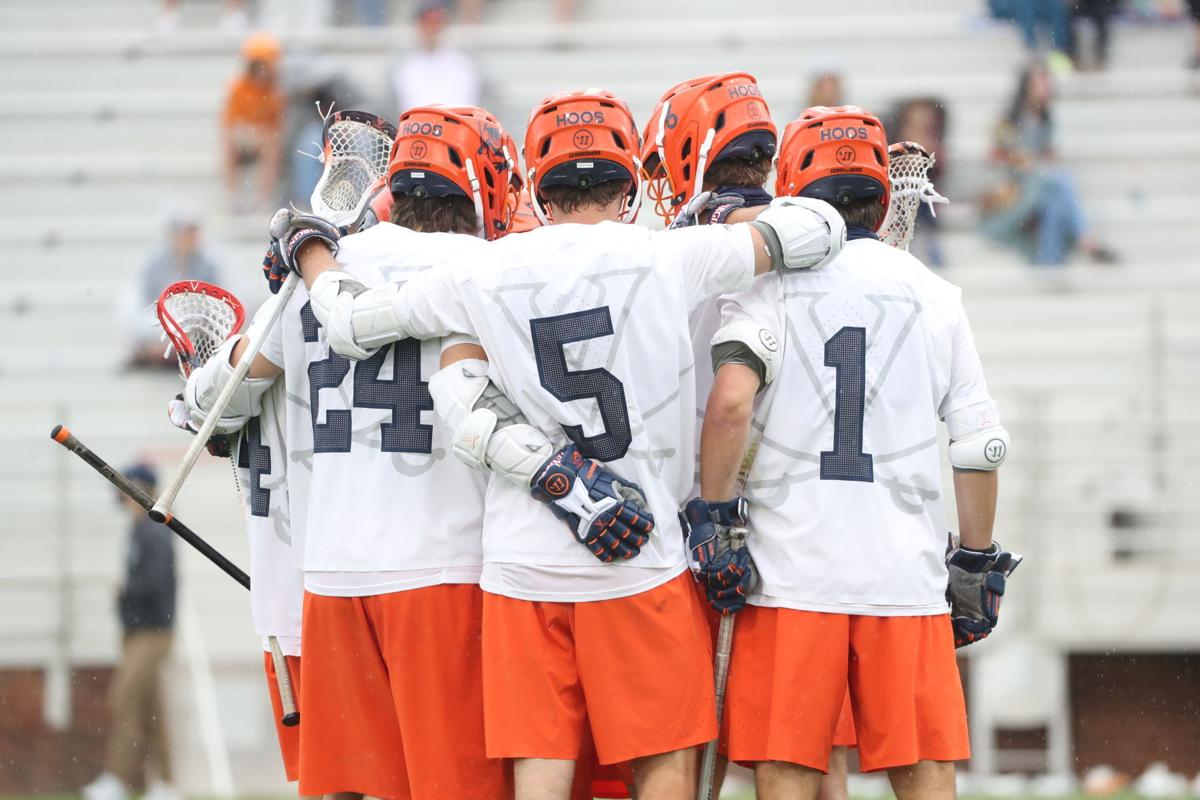 UVA lacrosse players huddled during their first-round win over Bryant. The Cavaliers, the 2019 NCAA champs, face Georgetown on Saturday. 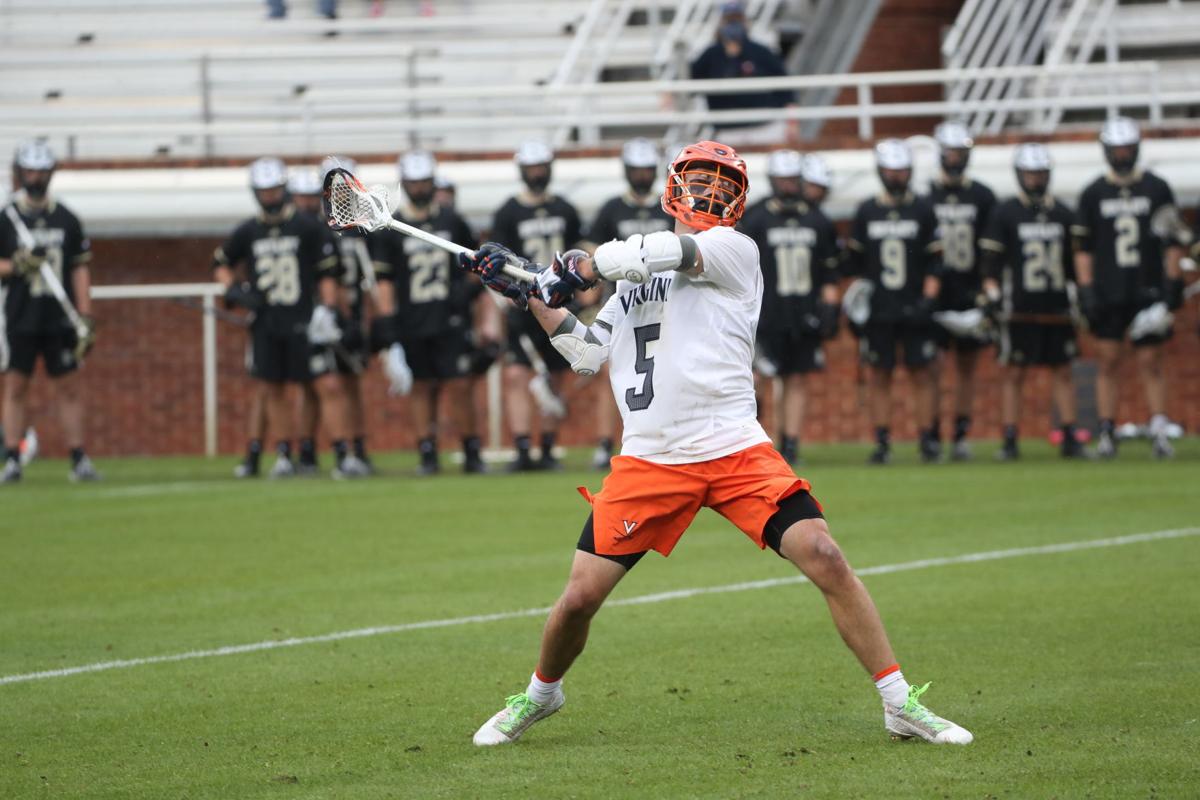 CHARLOTTESVILLE — Trailing by goal at the end of the third quarter, its promising season being threatened by unseeded Bryant, Virginia’s fourth-seeded lacrosse team gathered in a circle on the field, called together by captain John Fox.

“We kind of looked each other in the eye and not much was said,” senior attack Matt Moore said.

“John had some words of motivation, but really, other than that, we were looking at each other, guys smiling and guys just believing in each other.”

Then, the Cavaliers (11-4) played a dominant fourth quarter, rallying past Bryant for a 13-11 win in the first round of the NCAA tournament on a cold and rainy afternoon at Klockner Stadium. UVA advanced to face Georgetown on Saturday at Hofstra in Hempstead, N.Y.

Virginia turned a Bryant turnover into a Grayson Sallade goal 3:12 into the final period, tying the game 10-10, and senior Ian Laviano scored just over two minutes later to put the Cavaliers ahead for good. Laviano took a feed from sophomore Xander Dickson in traffic in front of the Bryant cage and found a way to finish, netting the game winner in his final game at Klockner.

“Ian Laviano’s game-winning goal was ludicrous,” UVA coach Lars Tiffany said. “He was under duress. There was not much of a window on that goalie’s off-stick side. He painted it in there.”

Moore and freshman Connor Shellenberger each had two goals and three assists for the Cavaliers, who also got two scores apiece from Laviano, Cormier and Garno.

Senior goaltender Alex Rode had a big day in the cage, finishing with 18 saves.

Tiffany, whose team won its fifth straight NCAA tournament game, praised Fox and the team for rallying before the final period and then executing well enough to hold off the Bulldogs (9-4).

For much of the first three quarters, the underdog Bulldogs seemed intent on seizing their opportunity.

“I thought we were the better team today for three quarters,” said Bryant coach Mike Pressler, the former Duke coach. “Give Virginia credit. That four goal burst, and we go from 10-9 us to 13-10 them and that was the one burst and it proved to be the difference. I thought we had a couple key mistakes there. To beat a great Virginia team, the reigning national champions, on their field, you have to play 60 full. And for us, we played 45. That last 15 minutes, for a lot of reasons, got away from us.”

The Bulldogs pushed the pace, especially early, and that kept the game tight, tied 3-3 late the first quarter. But that frenetic style caught the Bulldogs when a turnover in the final minute of the period led to a score by Laviano and 4-3 lead for the Cavaliers.

UVA led 6-3 midway through the second quarter, but Bryant scored three straight, tying the game 6-6 on a man-up goal with 5:10 to go before halftime.

A big outside shot by sophomore Peter Garno with 4:16 left in the half gave the Cavaliers the 7-6 edge at the break.

Bryant had a two-man advantage with 16 seconds left in the half that carried over to start the third quarter, but UVA killed it off and then pushed its edge to 8-6 on a goal by Payton Cormier.

The Bulldogs tied the game 8-8 with 8:59 left in the third quarter, then went up 9-8 just 58 seconds later when Marc O’Rourke scored unassisted. Those tallies were part of a 4-0 run for Bryant that left Virginia down 10-8.

Another big shot from Garno found the back of the cage to cut Bryant’s lead to 10-9 with 1:24 left in the third quarter.

That’s when Fox gathered the team in a circle on the field for a moment that spurred it to its fourth-quarter victory.

Virginia’s women’s lacrosse team was eager to show it could compete with Notre Dame in their second-round NCAA tournament matchup Sunday in South Bend, Ind. And, for the first 10 minutes, it did.

The Fighting Irish scored five straight goals to break open a tied game on their way to a 13-8 victory at Arlotta Stadium.

Senior Ian Laviano drives to the cage during Virginia’s first-round victory over Bryant in the NCAA men’s lacrosse tournament. Laviano scored the game-winning goal in the fourth quarter.

UVA lacrosse players huddled during their first-round win over Bryant. The Cavaliers, the 2019 NCAA champs, face Georgetown on Saturday.