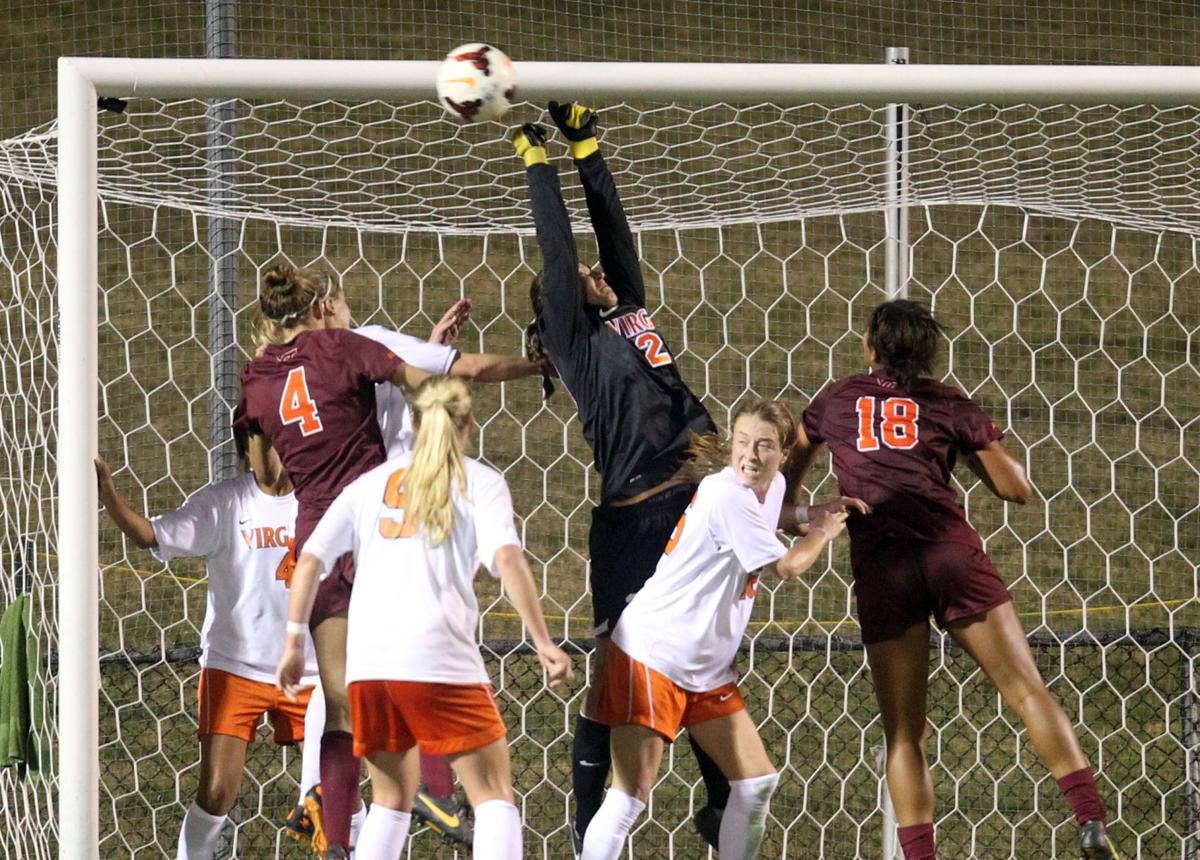 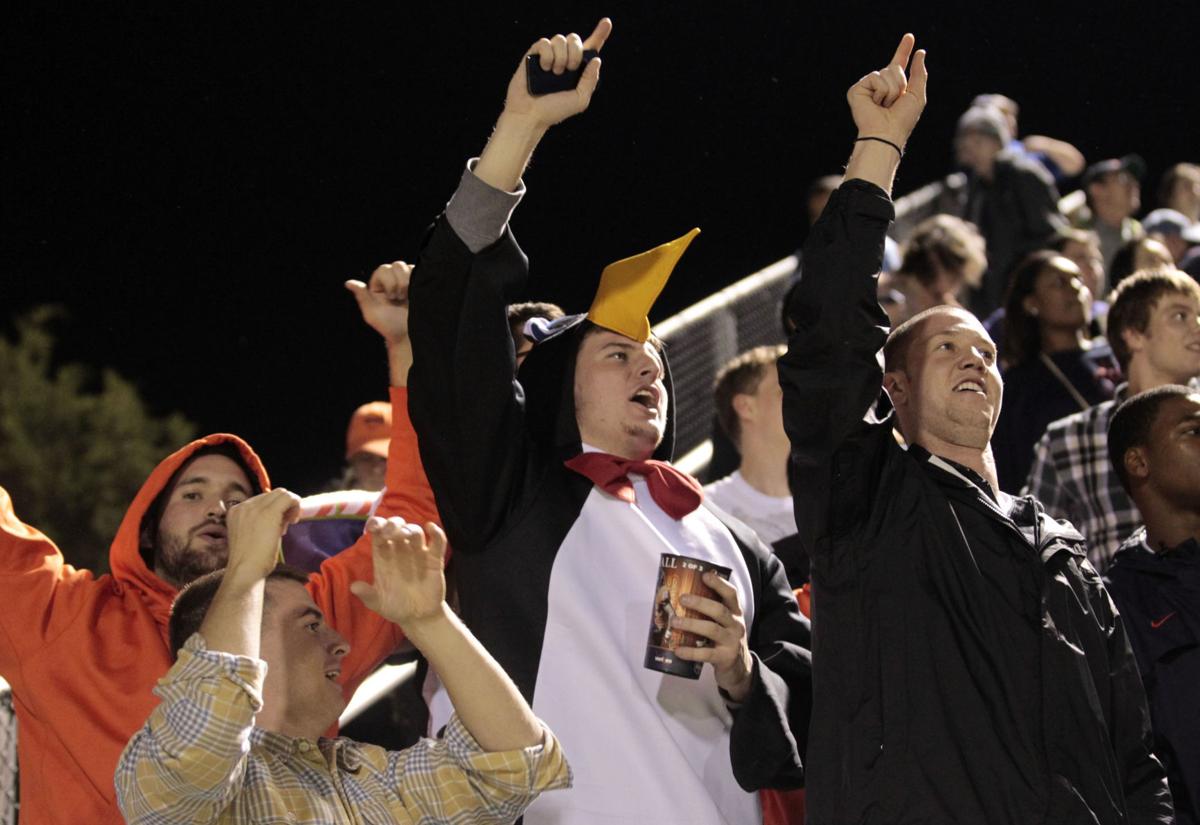 In 2016, fans packed Klockner Stadium in Charlottesville to see Virginia take down rival Virginia Tech 2-0 in a men’s soccer game. Soccer returns to Charlottesville for a women’s match on Saturday, but the crowd will be limited.

CHARLOTTESVILLE — Since the COVID-19 pandemic shut down college sports six months ago, Jesse Pritchard and his team have still worked steadily to tend to the turf at Virginia’s Klockner Stadium. The UVA grounds crew has prepared the field, mowing and watering the grass on a regular schedule, not knowing if matches would be played there this fall.

“The grass doesn’t know that we’re in a quarantine,” Pritchard said. “It keeps growing. So my staff and I have been back since April.”

And they have Klockner ready for its return to action.

Saturday, UVA will host rival Virginia Tech in a women’s soccer match that will be the first Division I sporting event in Virginia since the shutdown.

“I don’t think many of us thought we’d get to this point,” said Virginia senior forward Alissa Gorzak.

The last Division I sporting event played in the Commonwealth happened on the night of March 11, when North Carolina A&T beat Howard in a MEAC basketball tournament quarterfinal at the Scope in Norfolk. The last one involving an ACC team was the Hokies’ 5-3 baseball win over George Mason in Blacksburg earlier that same day.

This week, as the Virginia women’s soccer team prepared for Saturday’s match against Tech, said teammate Anna Sumpter, was the first time that it became a reality in her mind that the team would take the field Saturday.

“It was almost a fantasy for a while,” said the senior midfielder.

If playing a meaningful match was the fantasy, the reality was a nightmare of uncertainty. And it continues even as the ACC — along with the SEC and Big 12 — press forward with a plan to play fall sports. Thursday afternoon, UVA announced its men’s soccer exhibition against Clemson had been canceled, after the Tigers had two players test positive for the virus.

League-mandated testing and contact-tracing protocols could scrub many matches over the next few months, but the coaches preparing for Saturday’s women’s match said that’s not something they’re dwelling on.

“We’re in good spot and the kids want to play,” said Virginia Tech coach Chugger Adair. “The student-athletes want to play. They want the opportunity to get back normalcy. They’ve been training for two months and they’re eager to get out there.”

Adair’s players began returning to campus on July 6, first for small group work and then for team training. The program has had no positive COVID-19 tests since then.

Virginia athletics has tested 568 athletes over 25 programs, including the men’s and women’s soccer teams, since allowing them to return to the campus in July. Those tests revealed nine positive cases, none of which required hospitalization.

UVA women’s coach Steve Swanson likened navigating the pandemic to the game where you have to work a marble through a labyrinth.

“We’re about halfway home,” said Swanson, whose team hasn’t played an official game since an NCAA tournament loss to Washington State on Nov. 22. “There was some anxiety at the beginning when we came back about just being safe and being able to train. I think we got past that, but you’re adding elements to this all along.”

The start of the actual season brings with it new challenges.

“The travel, when we’re going to be gone on the road,” said Adair, whose team follows its game at UVA with road dates at Clemson and North Carolina. “We’re going to have to be in a bubble at the hotel and manage that. You can get stir crazy sitting at a hotel.”

When Virginia Tech and UVA met last season at Klockner, 2,415 fans showed up. This year, attendance will be limited to four family members per player and staff member. It’s just one more precaution aimed at helping the ACC get through the fall season safely.

“You just don’t know with something like this,” said Swanson. “I think it’s still a difficult situation and nobody can let their guard down.”

Not even the grounds crew.

William & Mary cited financial issues on Sept. 3 when announcing it would discontinue seven sports following the school year. That economi…

Hendon Hooker “broke it down” for his roommate, Virginia Tech football teammate Khalil Herbert. The team’s medical screenings brought on by CO…

Hopewell's Ronnie Walker cleared to play at UVA, could suit up on Saturday

Walker, a running back from Indiana, transferred to UVA, in part, to be closer to his family during the COVID-19 pandemic.

W&M aims to wrap up re-evaluation of sports cuts on or around Nov. 11, signing day

William & Mary continues to examine substantive plans to avoid the discontinuation of seven sports, and that process could wrap up on or a…

Liberty offensive line coach Sam Gregg said he wants his blockers “playing like a nickel, not five pennies.” This desired cohesion starts with…

The University of Richmond revealed plans to build the Queally Athletics Center in February of 2018. On-site work began during the spring of 2…

In 2016, fans packed Klockner Stadium in Charlottesville to see Virginia take down rival Virginia Tech 2-0 in a men’s soccer game. Soccer returns to Charlottesville for a women’s match on Saturday, but the crowd will be limited.