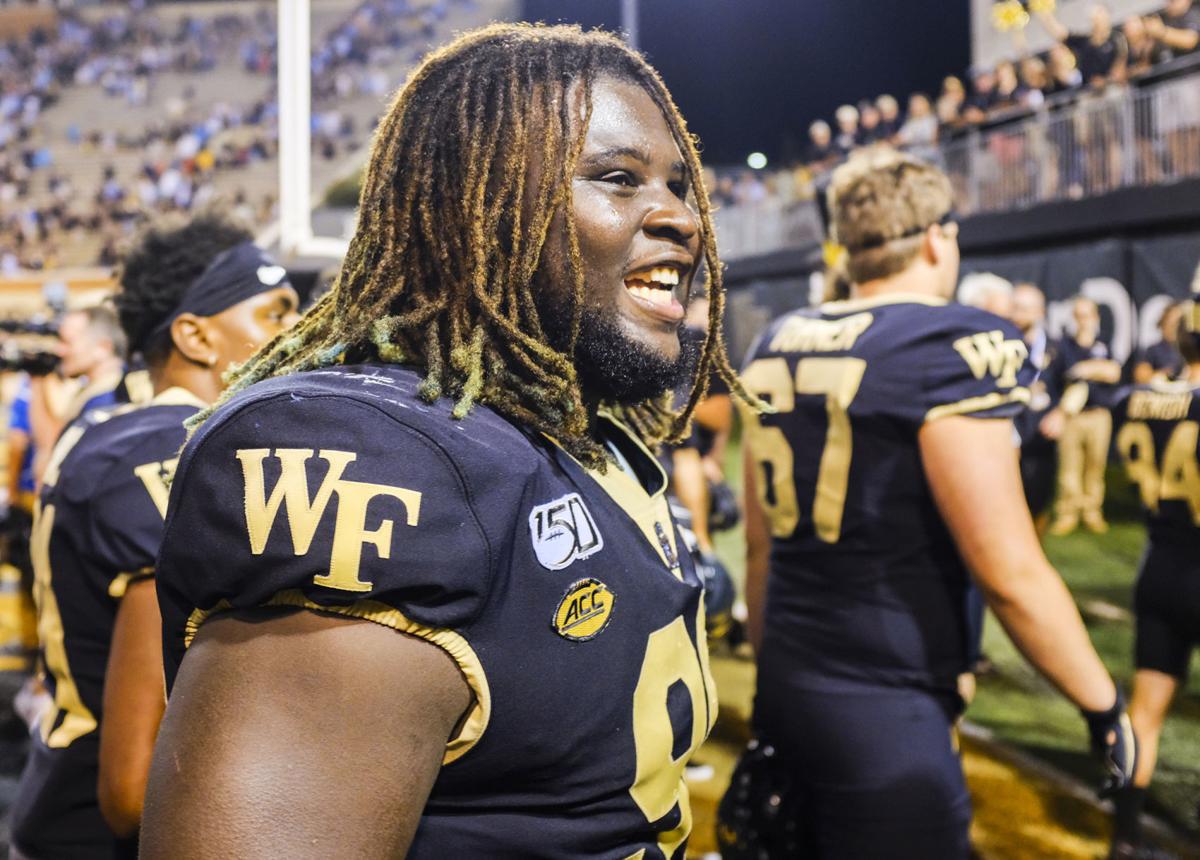 Wake Forest senior defensive tackle Sulaiman Kamara said he hasn’t visited Sierra Leone since leaving as a child, but he wants to live there again later in his life. 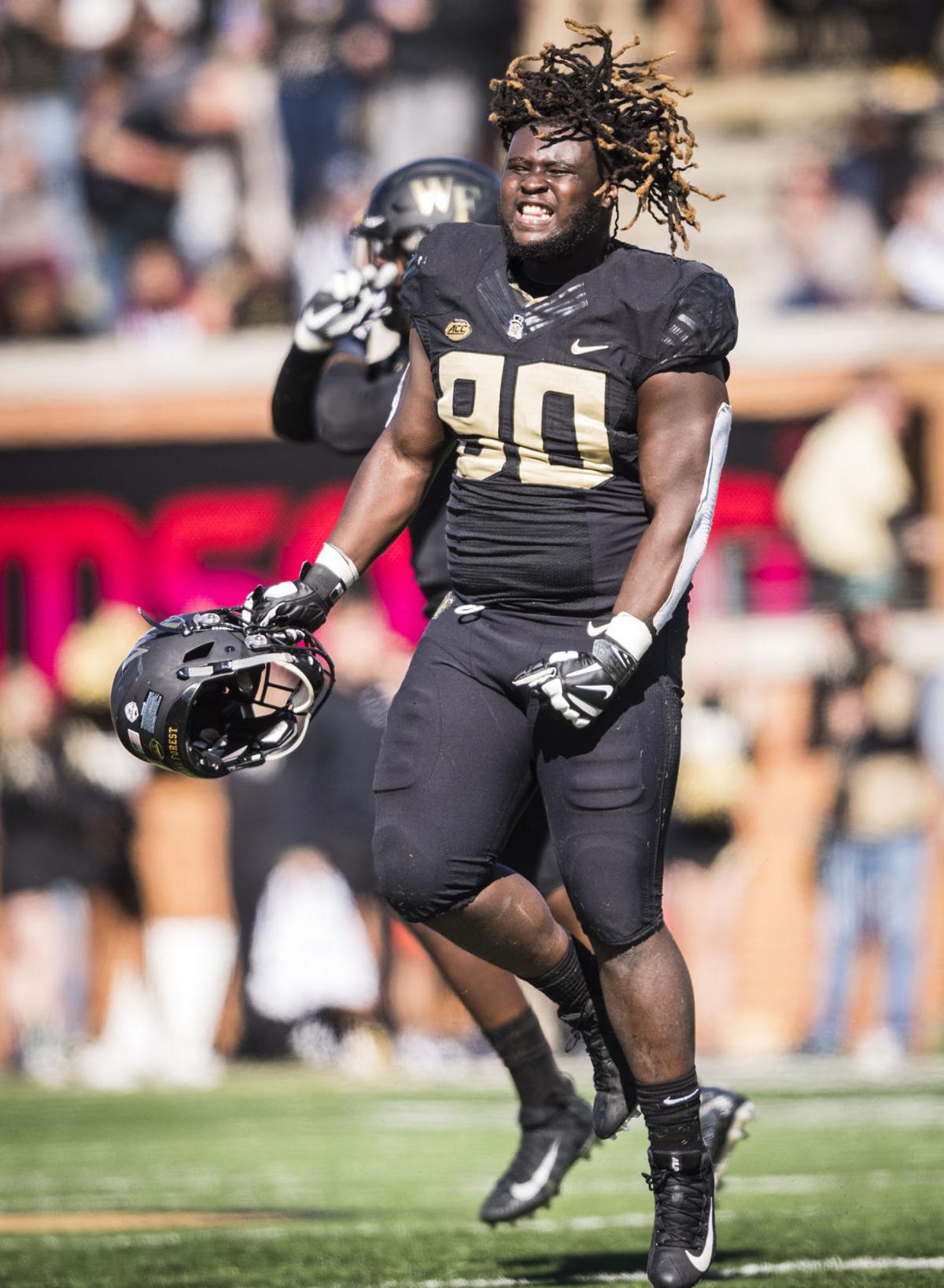 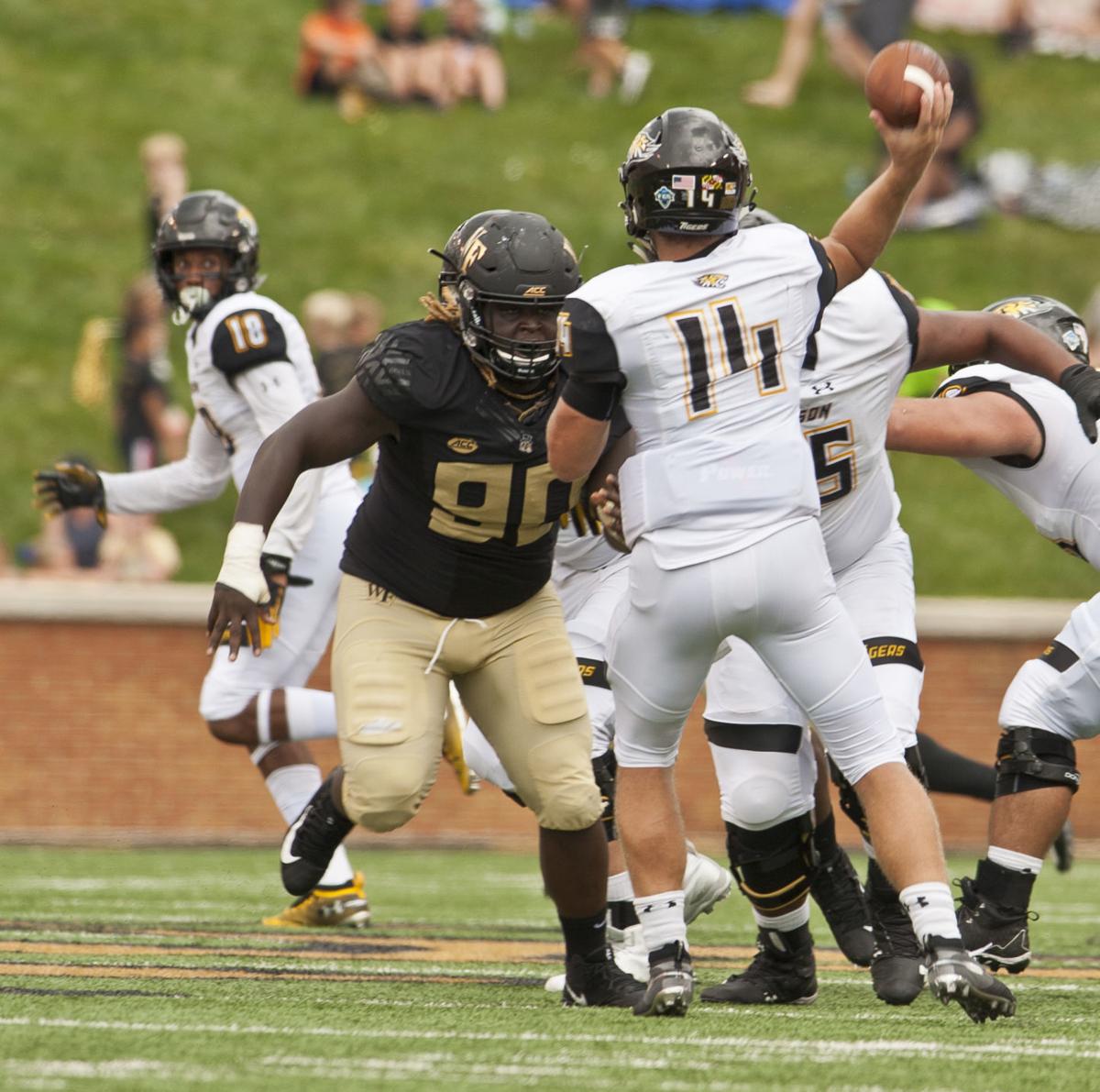 Hermitage’s Sulaiman Kamara (90) is in his senior season at Wake Forest. He was recruited by UVA and Virginia Tech, but coaching changes steered him south.

Sulaiman Kamara remembers bits and pieces of his journey from Sierra Leone to the United States. Just 3 years old at the time, the former Hermitage High School football star recalls the ferry ride to the airport, the flight across the Atlantic Ocean and meeting his father at a bus station in Maryland.

The memory that remains most vivid from his emigration from the civil war-torn country on Africa’s southwest coast is his first morning in his new home.

“I remember waking up the next morning and realizing I was in a different place,” said Kamara, now a senior defensive tackle at Wake Forest. “Coming downstairs and seeing all my siblings and my dad and grandma and everybody. That’s what I remember.”

It was a Christmas morning-like setting where the biggest present under the tree for a little boy who had spent over two years separated from his parents and siblings was having his family back together.

Sierra Leone’s civil war lasted 11 years, from 1991-2002 officially, and claimed over 50,000 lives. It sent countless families fleeing the nation, seeking safe, fresh starts. Kamara’s father was the first in the family to be able to obtain a visa and move to the U.S.

Soon after, in 1999, his mother and older siblings did the same, by way of Guinea and then Senegal. Older children were being forced to join the Revolutionary United Front army and getting them out of the country was the priority.

While Abu played defensive line and fullback and Sorie was a defensive back, Sulaiman — who the family calls “Sue” — was the biggest of the boys, a college prospect as a defensive tackle at Hermitage. He struck up a close bond with former Virginia coach Mike London, and might have become a Cavalier had London not been fired after the 2015 season.

Now, his Wake team hosts those two schools from the Commonwealth on back-to-back weekends. Virginia plays at Wake Forest this Saturday, and the Hokies come to town the following week.

“These two here are gonna be a lot more fun,” said Kamara. “Virginia, it’s where I’m from. I’m always excited to play teams from back home. I remember playing at Virginia Tech last year, that really got me going.”

Kamara turned 24 on Thursday, making him the old man of the Demon Deacons’ program, a fact his teammates make sure to rib him about often. But during his time in Winston-Salem, N.C., Kamara said he’s grown into a more complete football player, becoming a starter last season.

This year, the 6-foot-2, 300-pounder has recorded nine tackles through the first three games.

“I came here as a young kid, was probably a little too cocky, thinking things were gonna be easy, and I got humbled real quick,” he said. “My game has elevated way, way more than it was when I first came in.”

Kamara still has family back in Sierra Leone. When he’s home in Richmond, his mother will call him to the phone to say hello and stay connected.

Kamara understands the toll the civil war, and the subsequent Ebola outbreak and mudslides, took on his homeland. He knows Sierra Leone isn’t the same country his family left decades ago.

Still, his siblings have told him about the other side of life there, before the war. He hasn’t returned home, but it’s a trip he longs to take.

“Just hearing the stories they would tell me, the childhood they had when they were there, running around, picking mangos from the mango fruit trees, going to the beach, the kids in the neighborhood playing soccer,” said Sulaiman. “When a lot of people think of Africa, they think of Africa as this really poor place. My family, we didn’t have it too bad. We lived a decent life before the civil war. Even though they didn’t have much, they were happy.”

Abu Kamara was 10 when he left Sierra Leone with most of the Kamara family. He visited again in 2018.

“It was difficult, just seeing the country’s condition,” he said. “Before the war, it was very beautiful. People from all over the world came to visit the country because of our natural beaches.”

For Sulaiman Kamara, there is still much beauty in his native country and the people who still live there. So much so that he sees a return to living there in his future.

“When it’s all said and done, football, work life, I’d love to actually just retire to where I’m from,” he said. “Just have a house by the beach and enjoy the culture of where I’m from and my people.”

Virginia's defense struggling with big plays heading into game at No. 11 Miami

CHARLOTTESVILLE — As he studied video of Virginia’s defense this week, Miami offensive coordinator Rhett Lashlee decided the best look at the …

Stopping Miami QB D'Eriq King is priority No. 1 for UVa this weekend. That starts by stopping the former wide receiver and kick returner’s from running. If the Cavaliers are able to do that, it gives them a fighting chance.

On his arm and in his heart, UVA's Billy Kemp carries a memory to motivate him

Teel: Plenty to applaud about ACC football, but polls not accurate barometer

Notre Dame is a one-year rental, two of the Power Five conferences have yet to play a down, and polls have never been more irrelevant and impossible than in 2020.

UVA's Charles Snowden agrees with his coaches: He needs to do more

CHARLOTTESVILLE — For the past two weeks, Virginia football coach Bronco Mendenhall has said he’s been underwhelmed by the play of star outsid…

Struggling run game could be key for UVA at Wake Forest

Only three teams in the ACC average less than UVA’s 139 rushing yards per game.

Wake Forest senior defensive tackle Sulaiman Kamara said he hasn’t visited Sierra Leone since leaving as a child, but he wants to live there again later in his life.

Hermitage’s Sulaiman Kamara (90) is in his senior season at Wake Forest. He was recruited by UVA and Virginia Tech, but coaching changes steered him south.