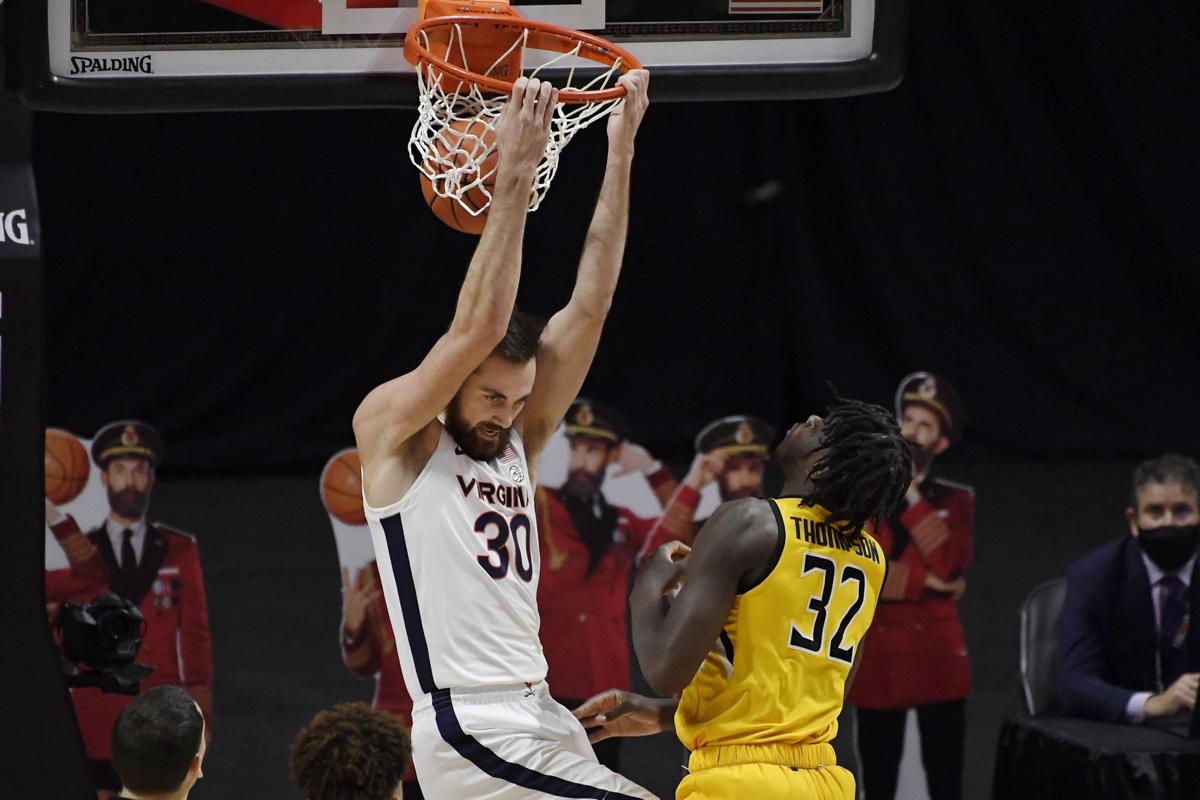 Virginia’s Jay Huff dunks as Towson’s Charles Thompson defends in the first half on Wednesday in Uncasville, Conn. 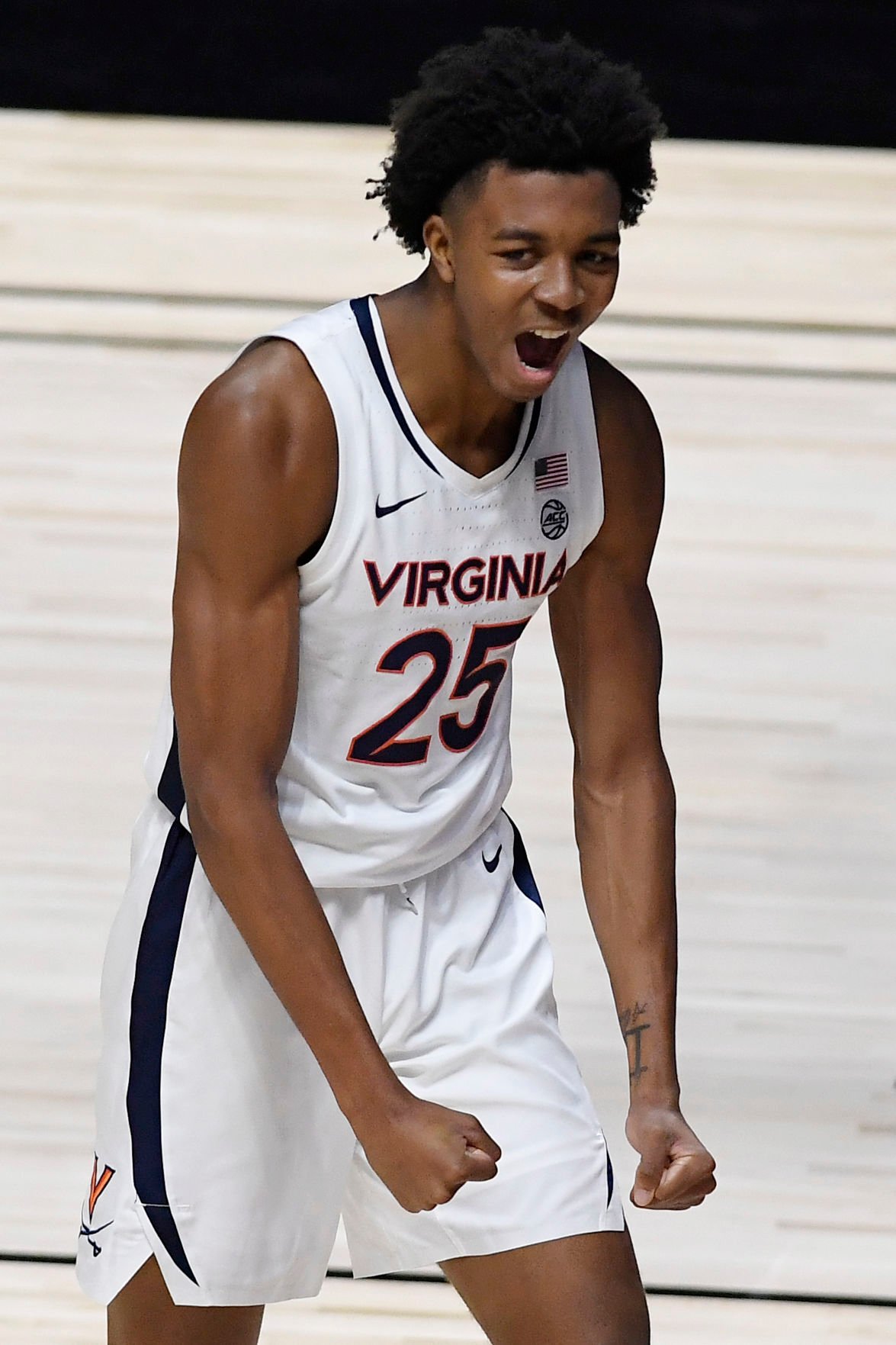 Virginia's Trey Murphy III celebrates after making a basket and being fouled in the second half of an NCAA college basketball game against Towson, Wednesday, Nov. 25, 2020, in Uncasville, Conn. (AP Photo/Jessica Hill)

A season after the Cavaliers went on outrageously long scoring droughts and ranked 234th in offensive efficiency, they showcased dramatic improvement on the offensive end in their 89-54 win over Towson on Wednesday at Mohegan Sun Arena in Uncasville, Conn.

Transfers Sam Hauser and Trey Murphy III played exceptionally well in their Virginia debuts as the Cavaliers (1-0) shot 55.6% from the field and 51.7% from 3-point range. UVA also went a perfect 4-for-4 from the free-throw line in a shooting performance to remember.

“I think it was kind of a relief knowing that we can do that type of thing,” Hauser said.

“It’s exciting to see and it doesn’t always happen like that, but today everyone was hitting it seemed like, so hopefully we can carry that over into Friday and our upcoming games. It’s fun to play when you’re making shots, but we just got to keep getting better.”

UVA started the action with a Jay Huff 3-pointer just 16 seconds into the game. The first half ended with Hauser, a transfer from Marquette, burying a 3-pointer.

In between, the Cavaliers scored an additional 36 points with Hauser and Huff leading the offensive charge.

Defensively, there were a few mishaps, but the Pack-Line defense kept Towson from generating anything consistent offensively throughout the afternoon.

Hauser’s 3-pointer with 14:16 left in the opening half put the Cavaliers up 19-5, as they raced out to a fantastic start. By that point, Huff had made a 3-pointer and slammed down a reverse dunk.

The offense slowed for a few possessions before Murphy, a transfer from Rice who was granted immediate eligibility to play this season, scored 9 consecutive Virginia points. The 6-foot-9 wing made three shots from deep to put UVA up 39-19 with 2:20 left in the half.

“It was nice to see,” Bennett said of the team’s offensive outburst. “It doesn’t always happen like that.”

Towson rallied a bit in the second half, opening the half on an 8-0 run while making its first three shots from 3-point range. Even with a quality start, the Cavaliers quickly reinstated their dominance.

Murphy remained hot, finishing the game with 21 points. He knocked down six of his eight shots from beyond the arc and added a massive dunk through contact.

He made the following free throw to complete the 3-point play.

Kihei Clark, who didn’t score in the first half, added 7 points in a quick burst.

It was a dominant offensive performance for a team that struggled to score a season ago.

It took Virginia until February last season to score 70 points in a game, and it only reached the threshold twice all season.

Virginia failed to score 80 points in a game last year.

This year, the Cavaliers rolled, nearly reaching 90 points in their season opener.

Murphy led all scorers with 21. Hauser added 19 points on nine shots, and Huff added an efficient 14 points on eight shots.

“When we have, at times, five guys on the floor that can stretch it, it opens up the court, hopefully gives us some driving opportunities,” Bennett said.

Depth showed itself throughout the game, with 11 different UVA players scoring in the blowout victory over the Tigers.

Virginia’s defense held strong, and the offense looked the part of a Final Four contender. While beating Towson isn’t the same as beating a ranked foe, the Wahoos struggled to score even against mid-major teams like Maine last season. Reaching 60 seemed like a major hurdle last year, while reaching 90 felt doable Wednesday.

“I mean, if they make shots like that all year, they’ll be incredibly difficult to beat,” Towson head coach Pat Skerry said.

This year’s group seems destined to be much improved offensively.

For a program known for suffocating defense, that’s welcome news.

Virginia’s Jay Huff dunks as Towson’s Charles Thompson defends in the first half on Wednesday in Uncasville, Conn.

Virginia's Trey Murphy III celebrates after making a basket and being fouled in the second half of an NCAA college basketball game against Towson, Wednesday, Nov. 25, 2020, in Uncasville, Conn. (AP Photo/Jessica Hill)