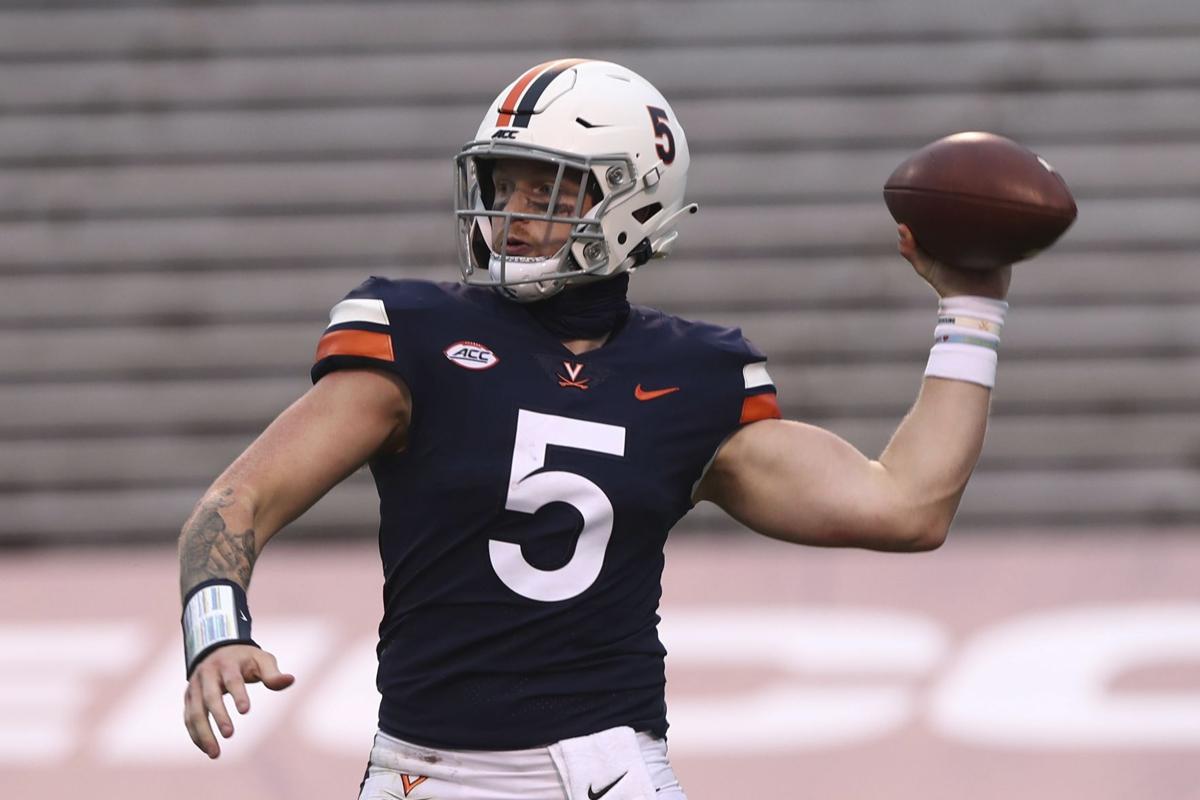 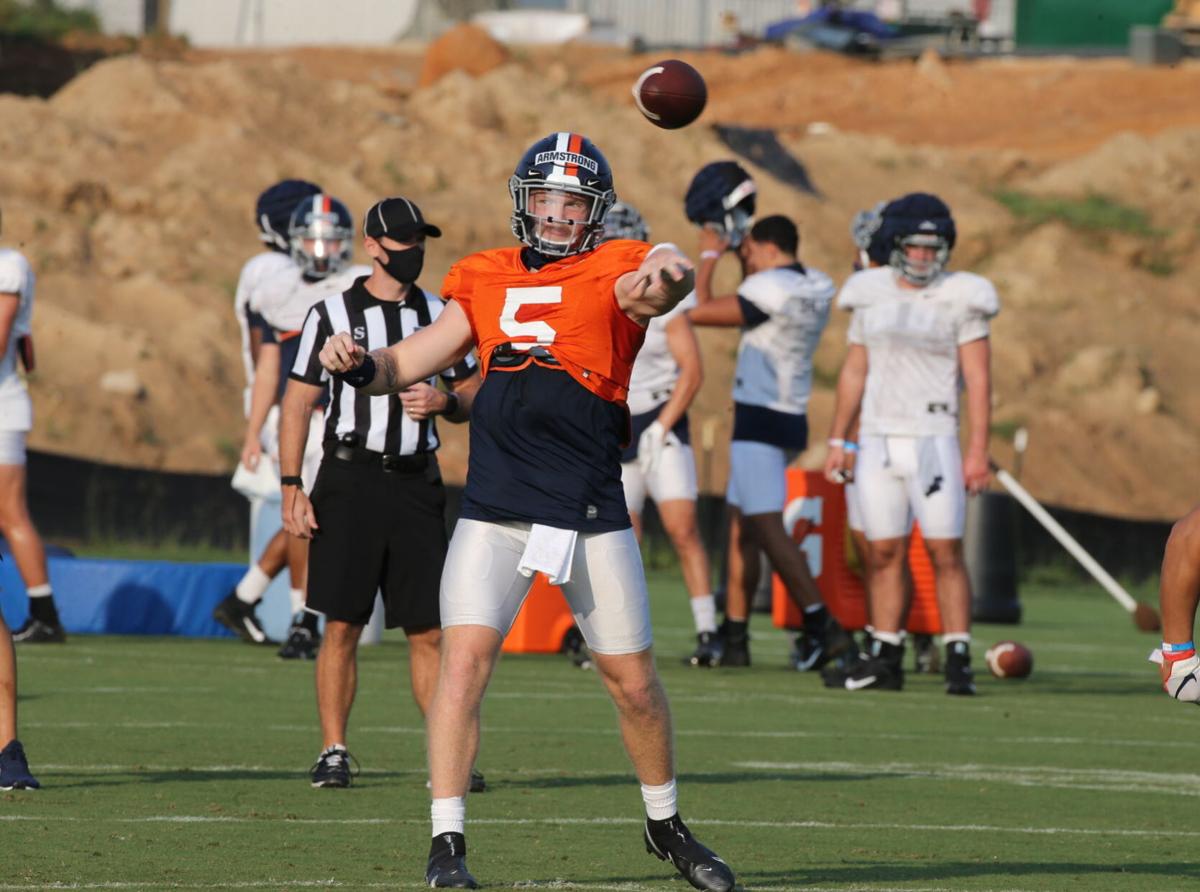 CHARLOTTESVILLE — Leading up to Virginia’s season opener, assistant Jason Beck admitted he’d be learning on the fly how to coach new starting quarterback Brennan Armstrong on game day. Would the fiery, red-headed left-hander get too excited in the heat of competition, or would he remain composed?

During the Cavaliers’ win over Duke, Armstrong and Beck often could be seen seated alone at the end of the offensive bench, going over what the rookie was seeing on the field. By the fourth quarter, when UVA had to rally, Armstrong had answered many questions.

“Heading into the game, a little nervous. Once I was running the ball a little bit, got hit a few times, I started settling in,” said Armstrong after the 38-20 win. “It’s just good to get a first win. I think I’m going to just settle down, be more consistent as each game comes.”

UVA’s offensive coaches wisely eased Armstrong into the action Saturday. He completed 11 of 25 passes in the first half, with no completion going for more than 18 yards. The Cavaliers ran the ball effectively to take some of the pressure off their first-time starter.

Virginia also went more up-tempo than it has since Mendenhall’s first season in Charlottesville five years ago. It wasn’t the breakneck pace Mendenhall talked about in 2016, when he had an assistant coach stand over the ball with a stopwatch to monitor how quickly the team could get off the next snap, but it was faster tempo — one the coaches believe suits Armstrong’s go-go personality.

“Brennan’s aggressive and he’s comfortable going fast and making decisions quickly,” Mendenhall said. “That doesn’t mean that’s all we’ll do, it doesn’t mean it’s primarily what we’ll do, but we thought it would give him his best chance in his first college start.”

Wednesday morning, offensive coordinator Robert Anae indicated UVA would likely use that up-tempo approach more throughout this season, calling it part of the team’s “new identity.”

“We are just starting this,” Anae said. “So hang on to your hats, boys. Hopefully, we go faster.”

Anae’s play-calling opened up in the second half and Armstrong had success throwing the ball downfield, especially to freshman wide receiver Lavel Davis. Jr., who finished with four catches for 101 yards and two fourth-quarter touchdowns.

Armstrong’s throws to Davis were situationally perfect, well-timed and placed to give the 6-foot-7 target the chance to come down with the ball.

In all, Armstrong went 8 for 9 passing in the final period for 144 yards and the two scores.

“The offense as a group, first time out the gate, and we had a slow start with things, but it was good to see them get in the flow of the game, battle back, show resiliency,” Anae said. “We try to mix up the play types as we go. I thought Brennan responded really good. I thought we gained confidence and as we went along with the flow of the game we got better with it.”

Armstrong’s big second half opened eyes down in Clemson, where head coach Dabo Swinney and defensive coordinator Brent Venables are game-planning against UVA this week in preparation for Saturday’s rematch of last year’s ACC championship game. Swinney even compared Armstrong to a former BYU and San Francisco 49ers star.

“He’s a challenge. He’s a problem,” Swinney said. “He’s a really good player. He looks like a young Steve Young out there. Lefty, crafty, creative, extends plays, tough runner, really good size, accurate thrower, really has no fear. Puts the ball up and trusts his guys to make competitive plays.”

Still, the Tigers’ defensive play-caller said he sees plenty of challenges defending UVA’s rookie, including preparing to face a left-hander.

“I thought Armstrong really had a lot of poise and managed the game well and played really big when they needed him to,” Venables said. “ … He’s a tough guy to emulate, just his sheer size. He’s a big athlete back there that can throw it and run it both, so a tough guy to emulate to say the least. We’ll find somebody to emulate him the best we can, but we don’t have any southpaws.”

Virginia’s performance was far from perfect, but the defense made critical plays, the offense moved the ball efficiently for most of the night and the Cavaliers added a notch to their win column.