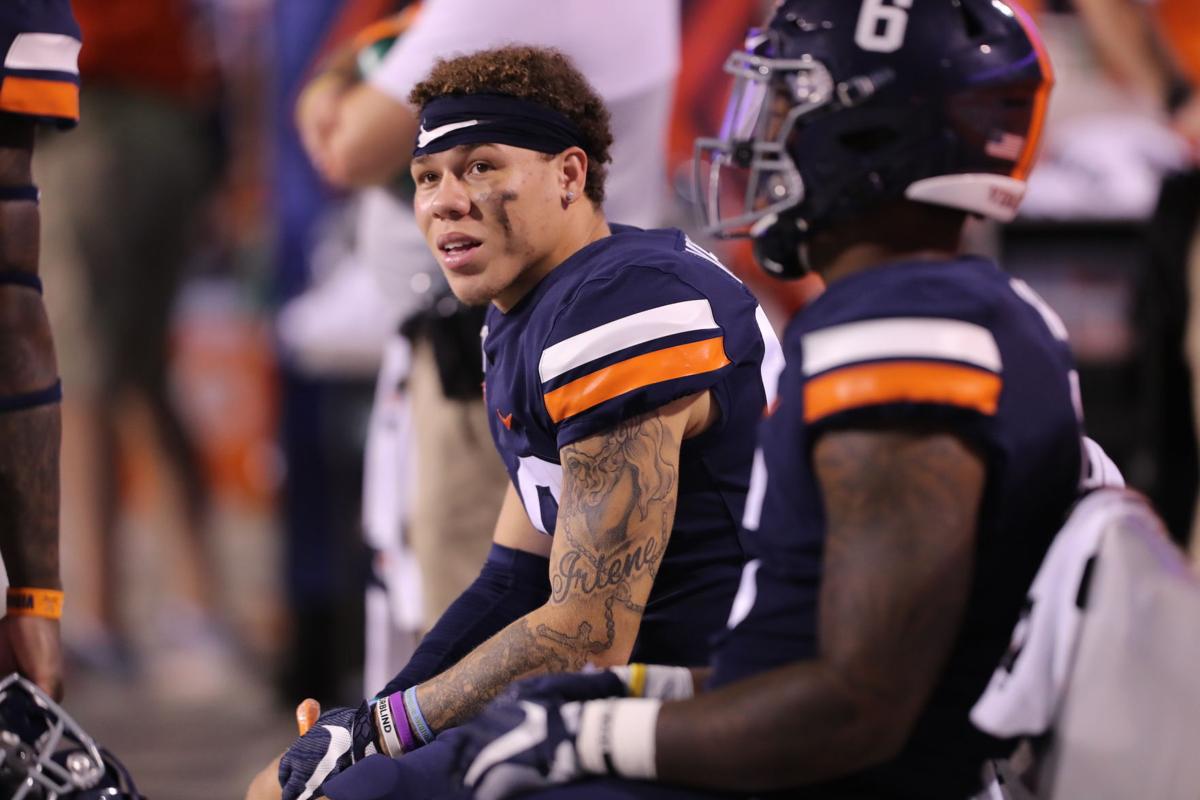 Former Highland Springs standout Billy Kemp is excelling at UVA. He does so with constant reminders of Cheryl Oliver, his friend’s mother who passed away from cancer in 2014. Among Kemp’s tattoos is her name on his forearm, along with a purple wristband also honoring her. 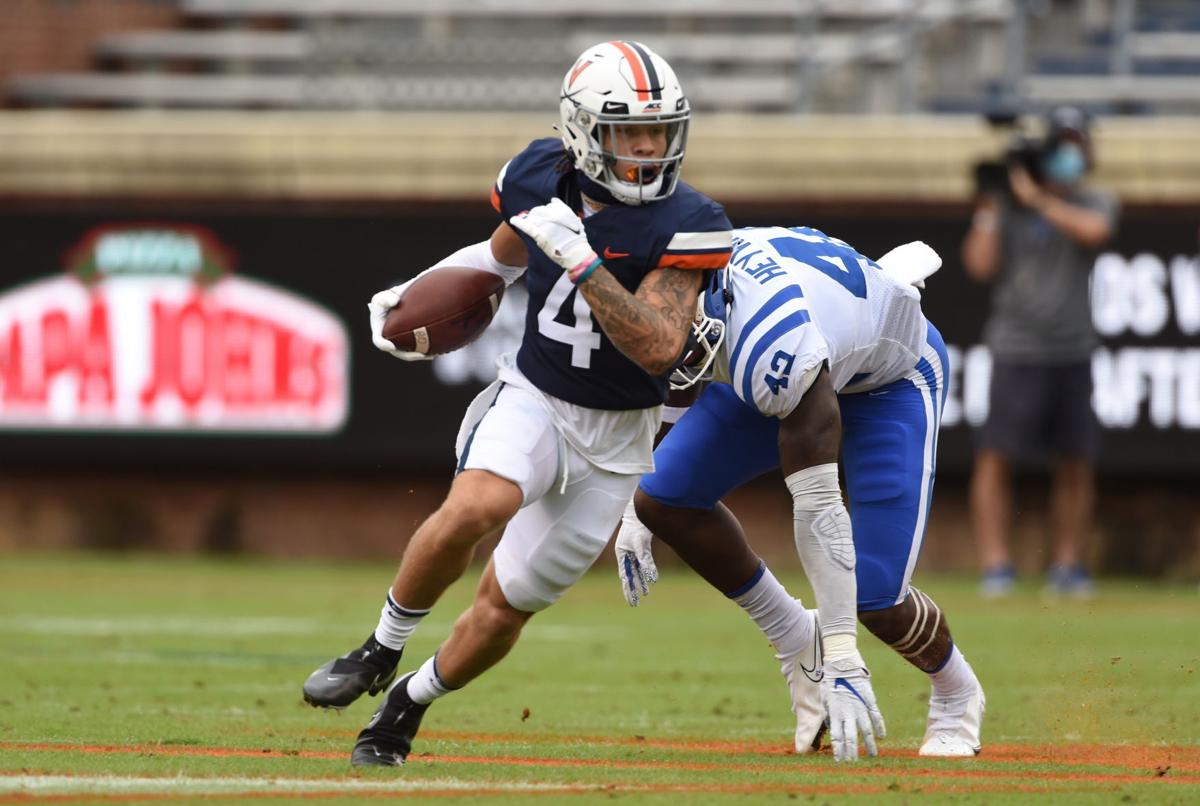 When two families forge a friendship so close that they become like one, they share everything — success, failure, joy and sorrow. So when cancer took Alex Oliver’s mother in 2014, the pain tore through Billy Kemp’s family as well. What Alex and his brother felt, Kemp felt too.

“I feel like my mom lives through all three of us,” said Oliver, a former Atlee High School football standout and now a freshman defensive back at VMI.

“She’s watching down on all three of us.”

Kemp, a receiver at Virginia and former Highland Springs star, has Cheryl Oliver’s name tattooed on his forearm.

The Cavs’ junior wears a bracelet on his wrist to remind him of her — purple, because she wore so many purple dresses.

Kemp recalls the painful time around Cheryl’s death with obvious sympathy for Alex and his brother. Oliver remembers Kemp stepping up for the two families, giving the Oliver boys support and even, against all odds, a sense of normalcy.

The Oliver brothers would spend many of their afternoons that year at the Kemps, playing outside, maybe shooting baskets.

“Whenever we went to Billy’s house, which we did a lot during that time, it was just a place that, with all the hard stuff going on, we could just take our mind off things,” said Oliver. “Do what regular kids do. He was just really good at being there for us. If we needed anything, he’d be there. But also, he helped us take our minds off a lot of things. He just acted like a big brother.”

That, Kemp says, is because he’s always felt like his family and the Olivers were one.

“During that time, though I know it hurt me, it hurt them even more, being their mother,” said Kemp. “That was a time I felt I needed to be there for them more than anything.”

It’s a bond both men say will never be broken, a testament to the love they had for Cheryl Oliver and the love she showed them.

This spring and summer, with football at both UVA and VMI on hold due to the COVID-19 pandemic, Kemp and Oliver got together to work out, to train and to drill with and against each other. Oliver spent his mornings doing physical therapy to recover from surgery to repair a torn labrum, while Kemp worked on his conditioning, taking bike rides around his Richmond neighborhood.

After that, they’d meet up to prepare for their upcoming football seasons. Looming on the schedule, a dream matchup that would have pitted Kemp against Oliver. COVID-19 ended up prompting VMI to push its season back to the spring, canceling that game and robbing the two friends of a matchup both had been eager to play.

Instead, Oliver watches Kemp play on television this fall every chance he gets.

He saw his friend, the 5-foot-9 dynamo that Virginia lines up all over its offensive formations, catch seven passes for 70 yards in its season-opening win over Duke, then follow that with a 10-catch, 96-yard performance in Saturday’s road loss at No. 1 Clemson.

Kemp leads the ACC in receptions per game heading into the team’s game against North Carolina State on Saturday.

UVA lists Kemp as an H-back, though most of his catches come after motioning out to the slot receiver position.

“He’s been the most consistent, the most competitive and the most productive player on our roster period, day in and day out,” said Cavaliers coach Bronco Mendenhall. “He has just been relentless in his preparation, and he’s playing exactly as he prepares.”

That’s an assessment that comes as no surprise to Kemp’s high school coach, former Virginia Tech player Loren Johnson. Johnson said Kemp’s experience playing behind undersized receivers, including Greg Dortch at Highland Springs, along with the tutelage he gets from UVA receivers coach Marques Hagans, a 5-10 former quarterback and receiver for the Cavaliers, has helped him develop into a productive Division I player.

In part because of his size, in part because he had to wait his turn for playing time at the powerhouse Highland Springs program, where neither talent nor numbers are in short supply, Kemp was undervalued as a recruit.

Rated a two-star prospect, most of Kemp’s scholarship offers were from FCS schools, including Richmond and James Madison. UVA took a chance on him and it paid off, almost immediately. He was one of 13 true freshmen to play for the team in 2018, and his role has expanded steadily each season.

In the Belk Bowl game his freshman year, he became the team’s punt returner. It was a job he coveted since getting to college, a role he’s held ever since. The loneliest spot in the ultimate team sport, Kemp says he embraces the solitude when a punt is in the air and he’s alone waiting yards behind his teammates to catch it.

“I feel free,” said Kemp. “You just have to trust your preparation and be fearless. Once you do those things, you’ll ultimately feel free back there.”

As the ball drops, Kemp cradles it in his arms, where it rests on the tattoo that honors Cheryl Oliver. He races upfield, carrying the ball, and her memory.

Virginia's defense struggling with big plays heading into game at No. 11 Miami

CHARLOTTESVILLE — As he studied video of Virginia’s defense this week, Miami offensive coordinator Rhett Lashlee decided the best look at the …

Stopping Miami QB D'Eriq King is priority No. 1 for UVa this weekend. That starts by stopping the former wide receiver and kick returner’s from running. If the Cavaliers are able to do that, it gives them a fighting chance.

Teel: Plenty to applaud about ACC football, but polls not accurate barometer

Notre Dame is a one-year rental, two of the Power Five conferences have yet to play a down, and polls have never been more irrelevant and impossible than in 2020.

UVA's Charles Snowden agrees with his coaches: He needs to do more

CHARLOTTESVILLE — For the past two weeks, Virginia football coach Bronco Mendenhall has said he’s been underwhelmed by the play of star outsid…

Struggling run game could be key for UVA at Wake Forest

Only three teams in the ACC average less than UVA’s 139 rushing yards per game.

Former Highland Springs standout Billy Kemp is excelling at UVA. He does so with constant reminders of Cheryl Oliver, his friend’s mother who passed away from cancer in 2014. Among Kemp’s tattoos is her name on his forearm, along with a purple wristband also honoring her.