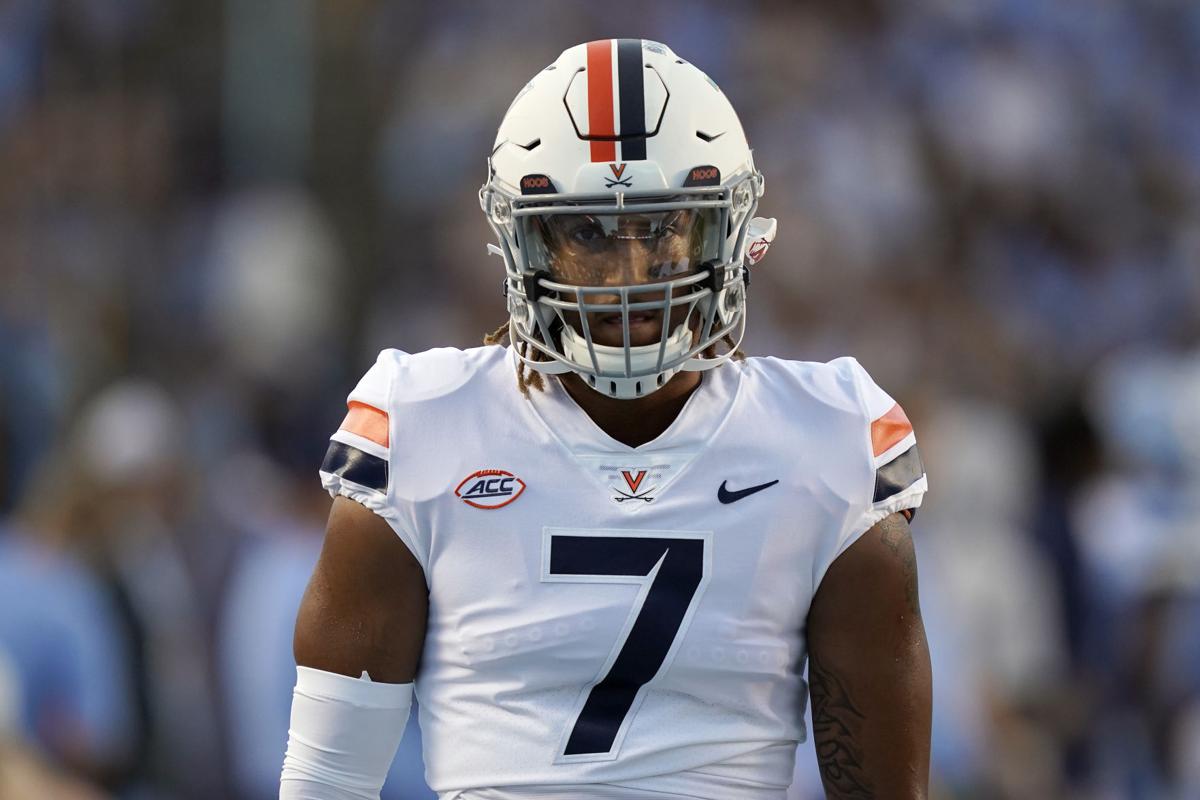 Virginia outside linebacker Noah Taylor had a team-high 12 tackles against North Carolina. 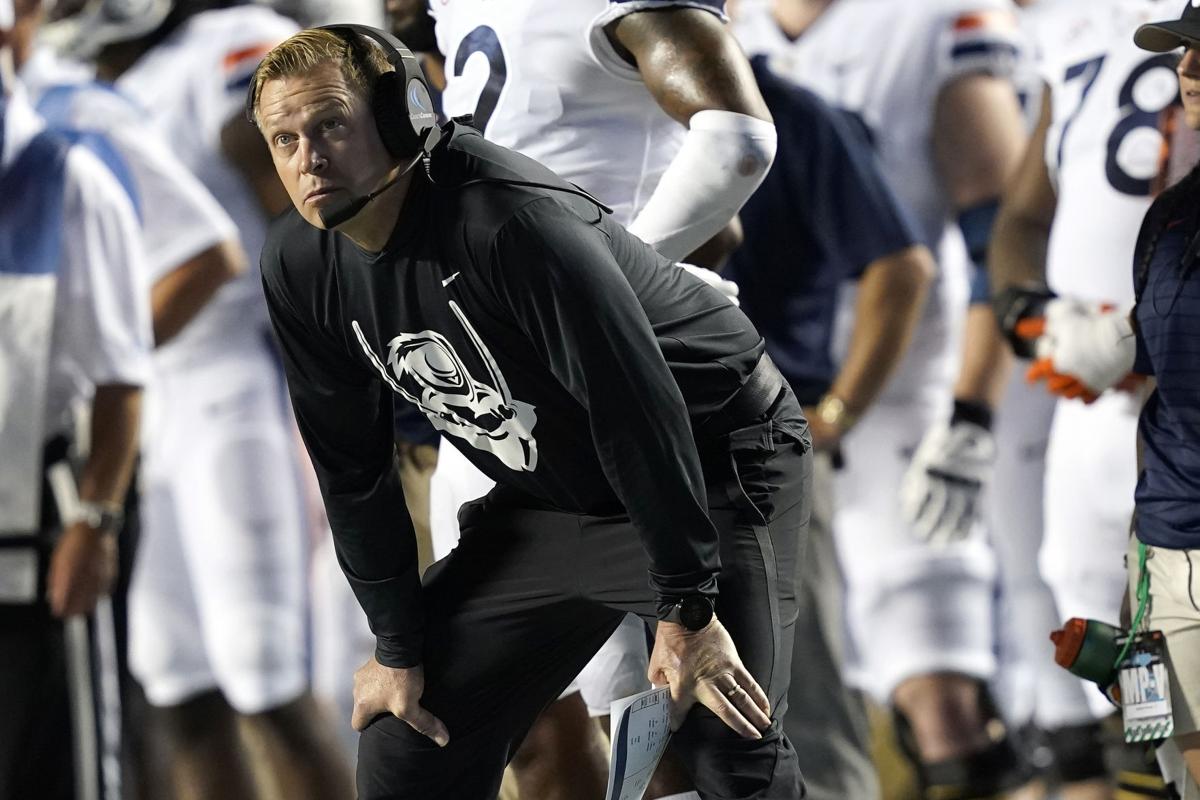 Virginia coach Bronco Mendenhall watches during the first half of the Cavaliers’ loss to North Carolina on Saturday in Chapel Hill, N.C. 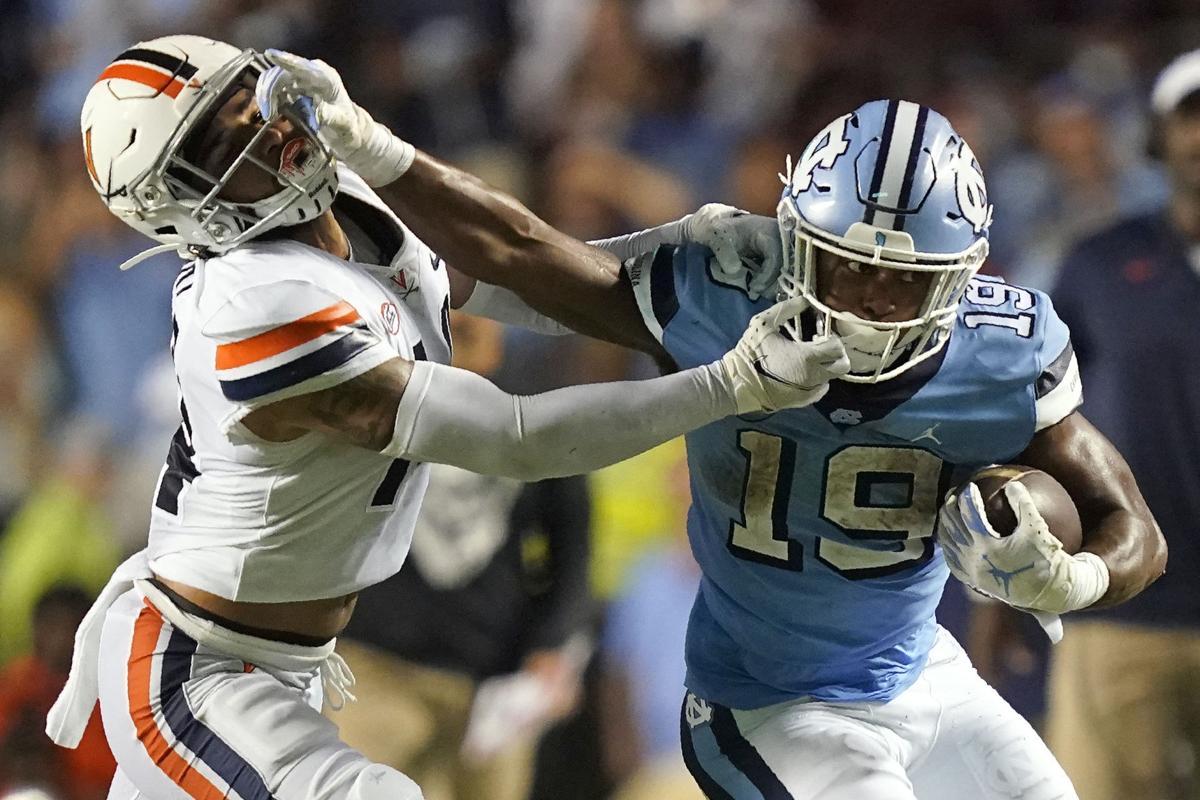 Bronco Mendenhall began this week knowing his defense needed to improve dramatically after allowing 699 yards and 59 points to North Carolina. He also knew his group had less than a week to work on its issues.

A Friday game day cuts into preparation time as UVA seeks answers to slow down the Demon Deacons, who rank fifth in the ACC in scoring offense, averaging 39.3 points. Wake Forest dropped 40 points on UVA a season ago in Winston-Salem.

“I see, and this might be counterintuitive, I see it as an advantage,” Mendenhall said Monday. “Urgency, urgency, urgency. When you have a week like that and you have weaknesses exposed or you don’t play to your potential or you’re disappointed after some hard setback, man, I like kind of being under the gun to go.”

Mendenhall briefly addressed the media again Wednesday, and while he’s seen an increased sense of urgency with a short week of preparation, he’s looking for more to close out the week.

“Not to the extent that I think makes me completely comfortable,” Mendenhall said. “The older players, the more mature players, they grasp it. Players are resilient, but a lot of times if you haven’t gone through a loss to a Friday, sometimes you’ll get stung again before you learn that lesson.”

That’s what UVA hopes to avoid.

Virginia believes better play is on the horizon, but the Cavaliers need advances this week. Starting 0-2 in league play with a road trip to Miami coming next, on another short week, would be borderline disastrous.

Mendenhall shared that he’s “really confident” the team is placing correct emphasis on the areas in need of defensive improvement. The question is whether the improvements show up in time for Friday night.

Defensive back Fentrell Cypress II recorded an interception against North Carolina, perhaps the lone defensive bright spot in the loss. He feels the defense handled the days after the poor showing well, saying the Cavaliers hope to turn it into a learning experience.

The defensive coaches harped on fundamentals and players doing their individual jobs this week during practice. That’s an area Mendenhall found concerning after watching the tape, feeling as if players competed outside their designated roles.

“Technique, doing your assignment, everybody gotta do their 1/11th, and that’s how we’re gonna win games,” Cypress II said.

On the bright side for Virginia, the team can lean on its offense.

UVA’s worst scoring output this season is a 39-point showing at UNC. Virginia eclipsed 40 points in wins over William & Mary and Illinois. In the team’s 34 possessions since the start of the second quarter against William & Mary, 19 have either ended with a touchdown or the drive being cut short by the end of a half.

The Cavaliers average an ACC-best 559.3 yards.

Wake Forest head coach Dave Clawson’s head has been spinning this week as his team prepares for the various formations UVA uses offensively. Clawson says most opponents use two or three different personnel groups. He’s counted nine from the Cavaliers through three games.

“I don’t know how they practice all this stuff, but they’re very good at it,” Clawson said.

When Virginia won the Coastal in 2019, a banged-up defense allowed at least 28 points in its final three regular-season conference games, but the offense carried the way to three wins. UVA doesn’t need to have the best defense in the conference to win games.

“We’re a team,” offensive lineman Ryan Nelson said. “If one of us succeeds, we all succeed. If one of us fails, we all fail. That’s the way life works. You don’t just leave behind one group or another.”

Virginia outside linebacker Noah Taylor had a team-high 12 tackles against North Carolina.

Virginia coach Bronco Mendenhall watches during the first half of the Cavaliers’ loss to North Carolina on Saturday in Chapel Hill, N.C.