UVA's Bennett: 'We are exhausting all options to participate in the NCAA tournament' after team member tests positive for COVID
16 comments
Share this
1 of 2 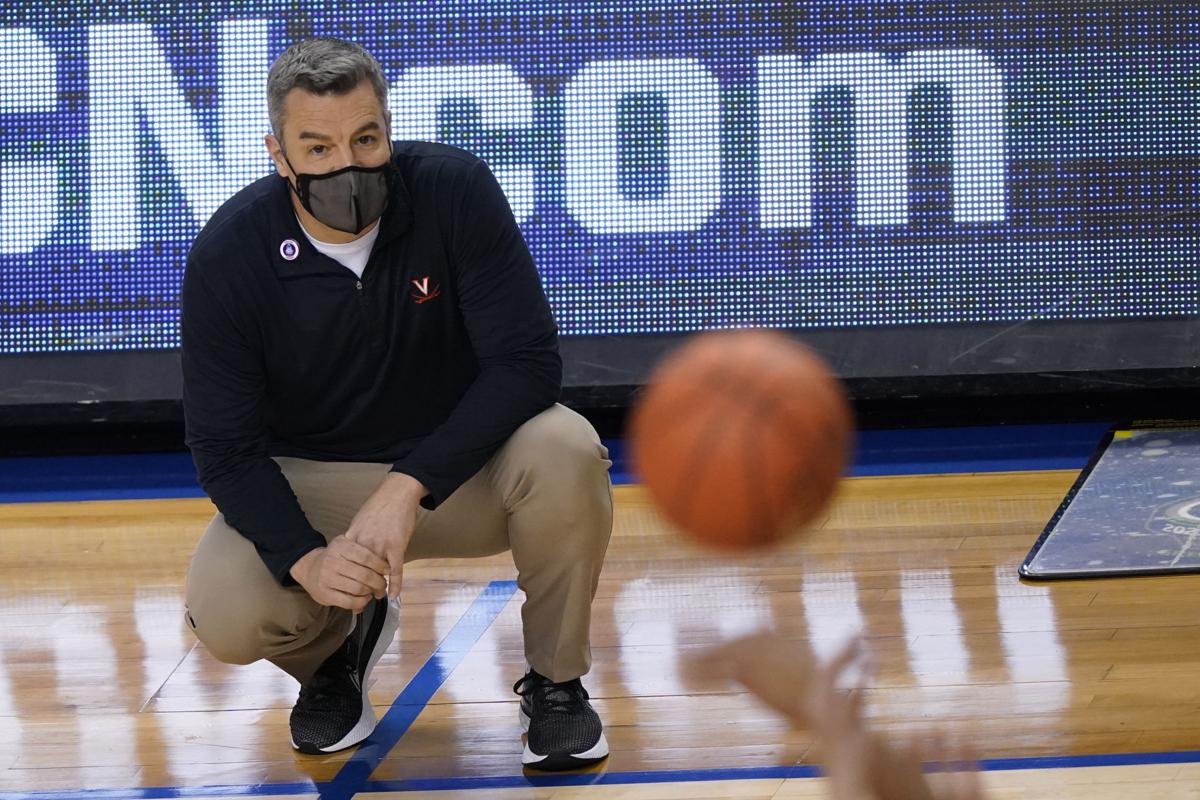 Tony Bennett, UVA’s head coach, watched the Cavaliers play during the first half of Thursday’s game. He expressed disappointment about the cancellation of Friday’s game. 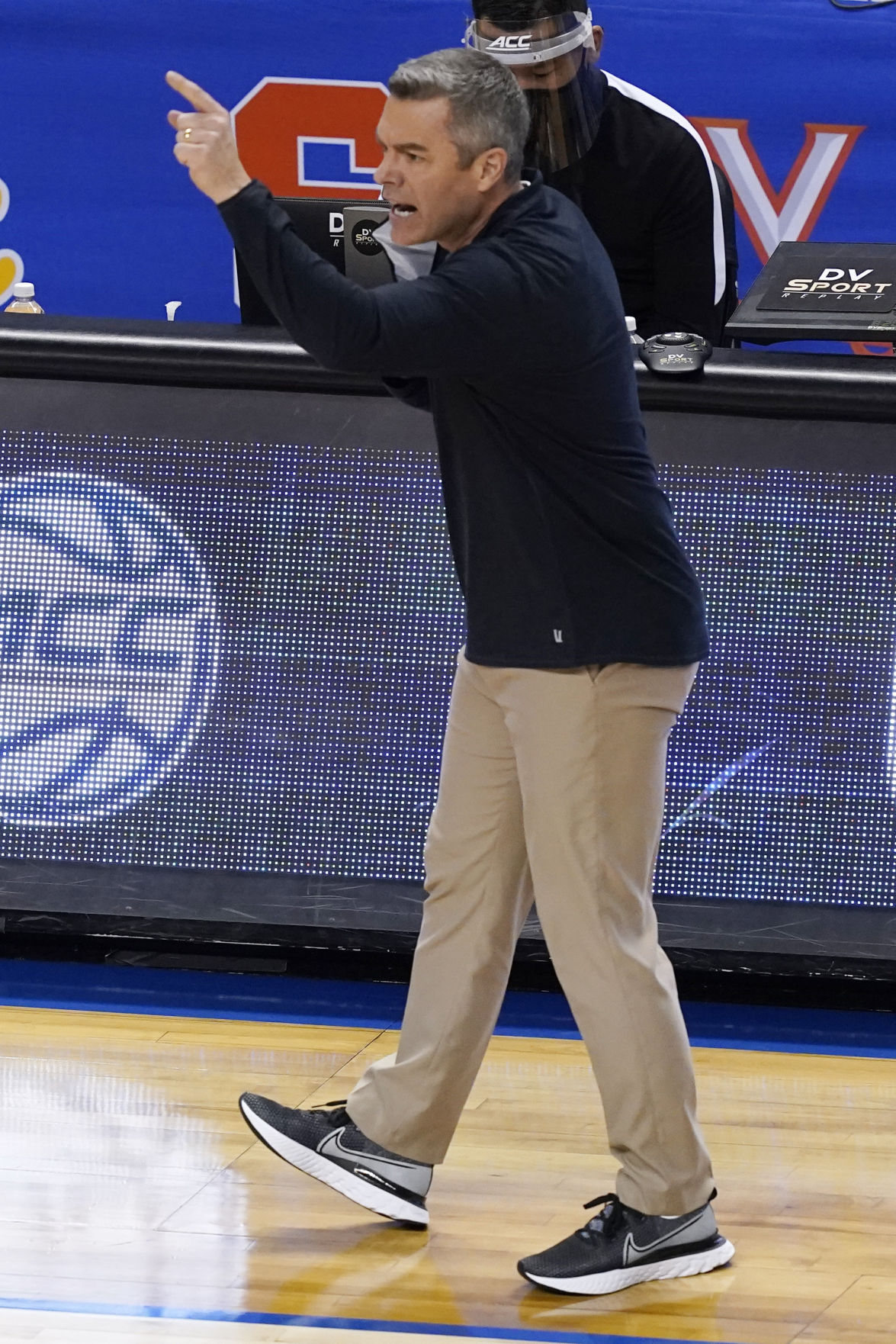 Virginia head coach Tony Bennett directs his team during the second half of an NCAA college basketball game against Syracuse in the quarterfinal round of the Atlantic Coast Conference tournament in Greensboro, N.C., Thursday, March 11, 2021. (AP Photo/Gerry Broome)

GREENSBORO, N.C. — A positive COVID-19 test within the Virginia basketball program forced the ACC to cancel Friday’s semifinal between top-seeded UVA and Georgia Tech, and could endanger the Cavaliers’ NCAA tournament future.

“We went from an exhilarating game-winning shot to beat Syracuse to a gut punch regarding the positive COVID-19 test within our program,” UVA coach Tony Bennett said in a statement. “I told our young men they have every reason to be disappointed, but it is still very important how they choose to respond.

“We are exhausting all options to participate in the NCAA Tournament.”

Similar situations were playing out across the country, raising doubts about the NCAA’s signature event exactly one year after it became the first major sports cancellation caused by the pandemic.

Perennial powers Kansas and Duke also withdrew from conference tournaments this week because of positive tests, but it impacted smaller schools as well. North Carolina A&T, which was on track for a tourney berth, had to shutter its season early.

NCAA protocols state that each member of a team’s travel party must have seven consecutive negative tests to make the trip to Indianapolis for the NCAA tournament.

Dan Gavitt, the NCAA’s senior vice president for basketball, said teams only need five players to be eligible for the tournament, so it is possible UVA could quarantine those players who have tested negative and still play in the event.

“The committee talked about this weeks ago, wrestled with contingencies, and thought it was fairest for a team that had a great season, earned their way to play in this tournament, that even if they were to be compromised in some way, if they have those five players, they still should have the opportunity to compete rather than be replaced,” Gavitt said. “If they fall below the threshold of five, of course they would not be able to play by playing rules, nor by tournament protocols.”

The game is the second the ACC had to cancel this week, after Duke bowed out on Wednesday.

On Friday, the league announced that the fourth-seeded Yellow Jackets would automatically advance to the title game. The ACC did not cancel Friday’s other semifinal, between North Carolina and Florida State, as of Friday evening.

New ACC commissioner Jim Phillips was not available to the media on Friday, but did put out a statement. It did not address the conference’s apparent decision to move forward with the remaining games, or clarify UVA’s NCAA tournament situation.

Phillips wrote: “I’m heartbroken for our student-athletes, coaches and support staff at both Duke and Virginia. Our teams have worked incredibly hard and sacrificed so much throughout this season. ... Our student-athletes and schools have been remarkable this entire season while enduring incredibly challenging circumstances.”

As the regular-season champion, Virginia had a double-bye into the ACC tournament quarterfinals. It topped Syracuse 72-69 on a buzzer-beating 3-pointer by freshman Reece Beekman.

After Thursday’s win, UVA’s Bennett spoke about Duke being knocked out of the ACC tournament due to a positive COVID-19 test, not knowing 24 hours later, his program would be in the same situation.

“It was here, almost probably 365 days, it might have been where it got called. You’re getting ready to play on the day of your game and the tournament got canceled and then shortly after the NCAA Tournament,” said Bennett, recalling last year’s abrupt end to the season. “So just to get out here and to play in a game, and then to have it end like this … I was so discouraged for those young men and Coach K.”

Virginia won the 2019 national championship. Last year’s tournament was canceled due to the spread of COVID-19.

Tony Bennett, UVA’s head coach, watched the Cavaliers play during the first half of Thursday’s game. He expressed disappointment about the cancellation of Friday’s game.

Virginia head coach Tony Bennett directs his team during the second half of an NCAA college basketball game against Syracuse in the quarterfinal round of the Atlantic Coast Conference tournament in Greensboro, N.C., Thursday, March 11, 2021. (AP Photo/Gerry Broome)