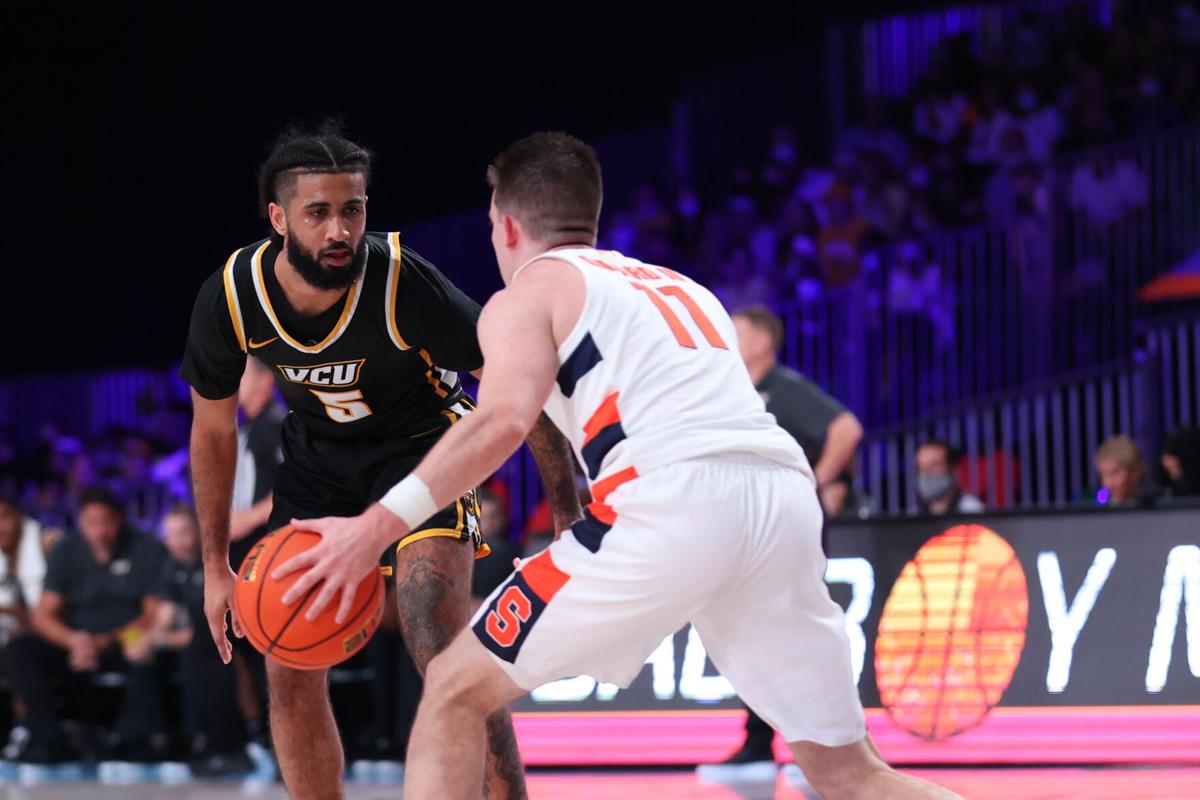 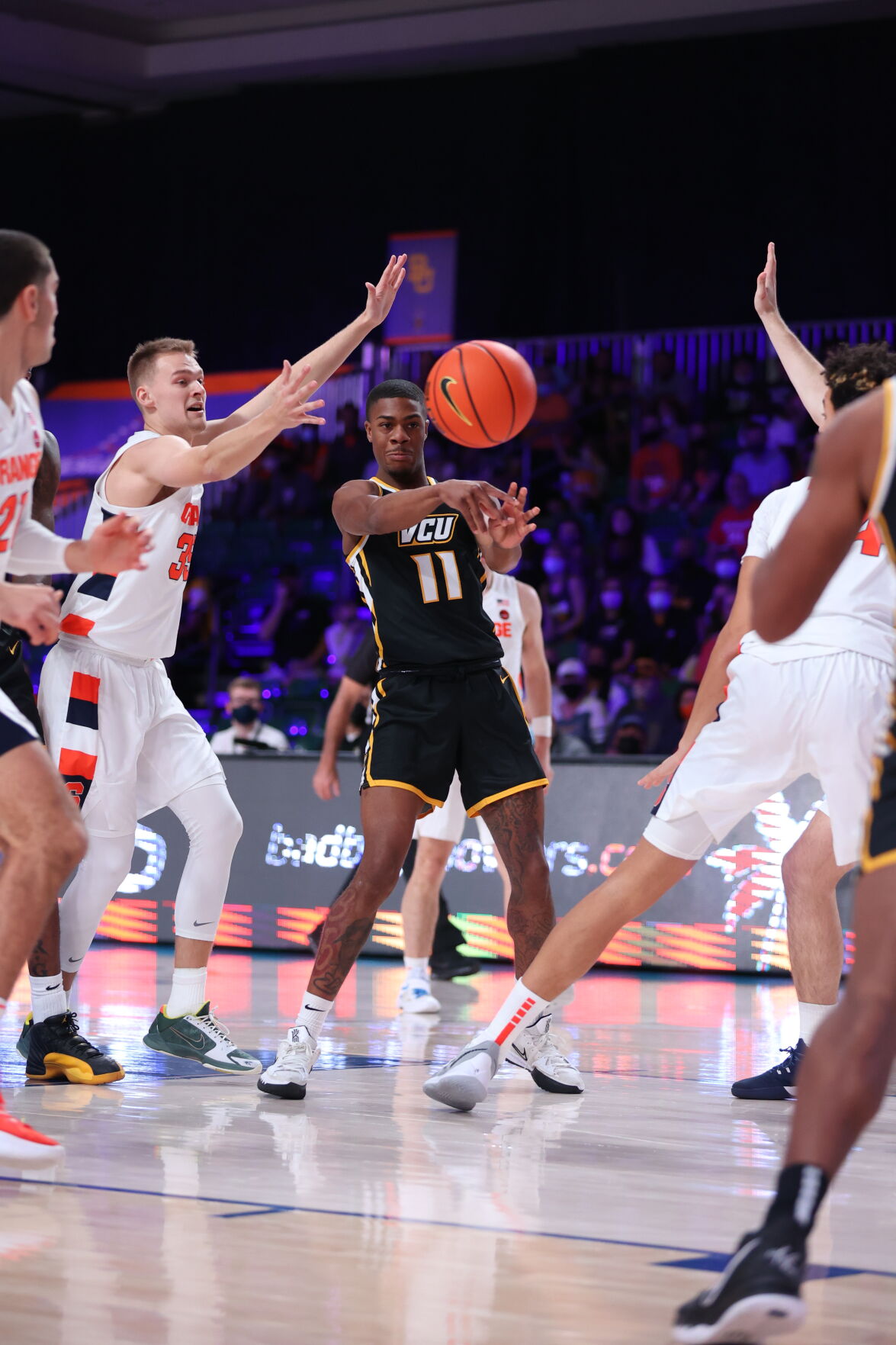 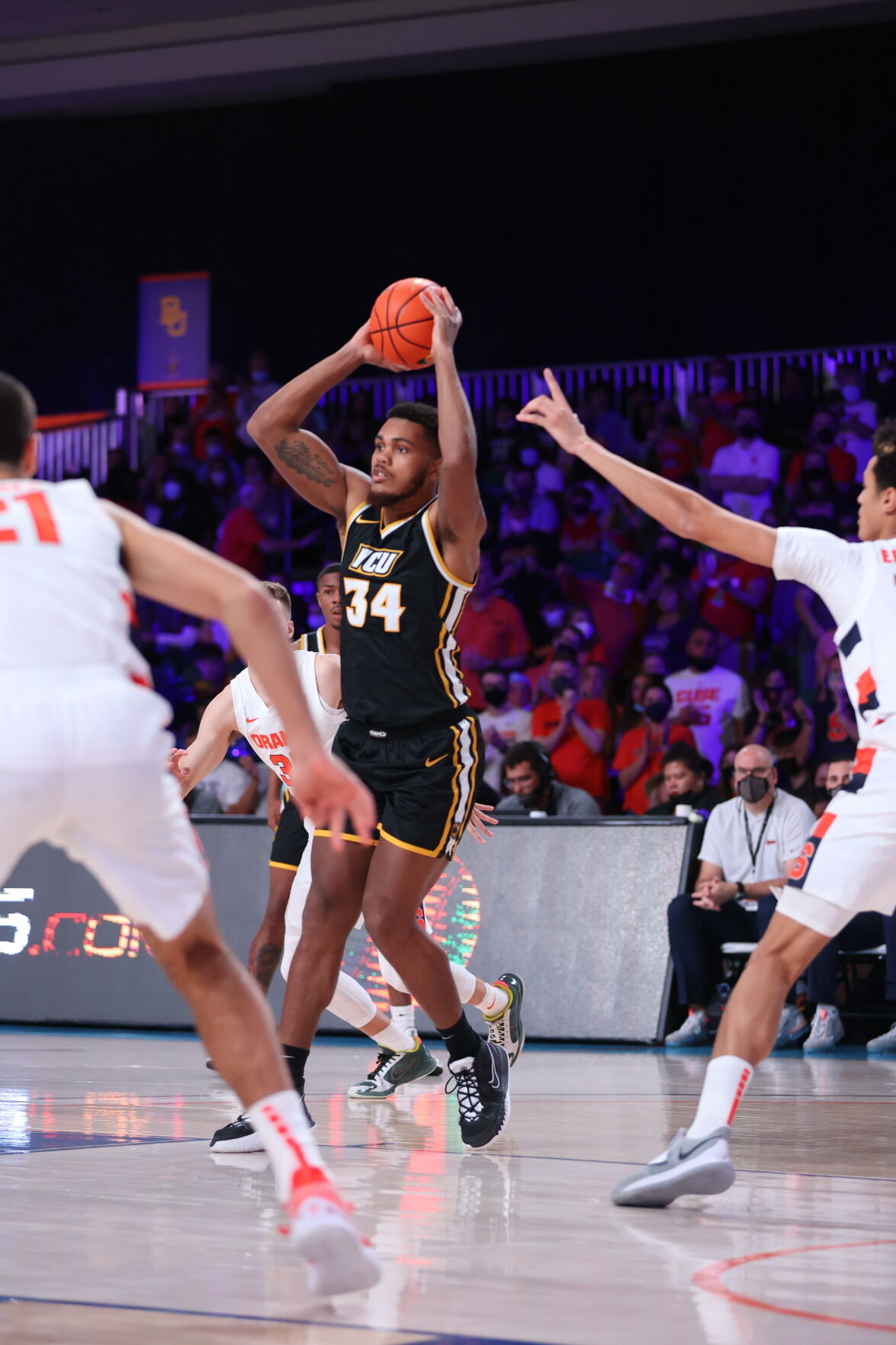 VCU, in its Wednesday night Battle 4 Atlantis opener against Syracuse, executed a textbook possession against the Orange’s signature 2-3 zone defense with about 13 and a half minutes to go.

Vince Williams, from the left wing, fed the ball to Levi Stockard III in the middle of the defense. Then Stockard found Hason Ward along the baseline, who finished with a strong dunk. The play gave VCU a 3-point lead at that point.

And it was part of a pivotal stretch in the game, when the Rams picked up confidence, clearly. Syracuse followed with a shot clock violation, then the team turned the ball over on a travel call.

And from there VCU began to roll, a sequence that helped propel it to a 67-55 win at Imperial Arena in Paradise Island, Bahamas — a big result for the Rams to begin its big Battle 4 Atlantis week.

“They did a phenomenal job of having two good days of practice, a great shootaround today and carried over the game plan to the tee,” coach Mike Rhoades said of his team.

VCU (3-2), against the Syracuse zone, took off offensively in the second half. The Rams’ 67 points were a season high, as was their seven 3-pointers (they finished 7 of 18).

And VCU’s defense gave the Orange (2-2) trouble for most of the night, holding them to 29% shooting.

VCU registered its first win over Syracuse in the schools’ fourth-ever meeting (first since 1992).

The Rams, after the Syracuse travel call in their big second-half sequence, got a 3 from Tsohonis. Then, after the Orange’s Jimmy Boeheim responded with a 3 of his own, Stockard answered with a 3-point play.

The Rams mostly controlled the proceedings from there. They shot 56.7% (17 of 30) overall in the second half — the best offensive half of the season so far, Rhoades said.

“I thought we did a good job of getting it inside-outside action,” Rhoades said, of VCU’s movement against the zone. “I thought our guys, when they caught the ball, we didn't panic. We talked about being calm in chaos.”

Foul trouble for Syracuse’s 6-11 center Jesse Edwards was a notable issue for the Orange. Edwards went to the bench with his fourth foul with 15:41 to play. And his time out of the game coincided with VCU’s decisive swing.

“They got it in the middle and we had trouble when Jesse went out,” Syracuse coach Jim Boeheim said. “We had to try to protect the middle a little bit more, and the basket. And they got a couple open 3s and knocked them down. That was really the difference."

VCU finished the game with a pair of dunks off Syracuse turnovers, by Stockard then Vince Williams, after which an emphatic yell could be heard, as the VCU bench erupted.

Stockard’s 15 points tied his VCU high since transferring from Kansas State last year (his career high is 17, with Kansas State in 2019). His four assists were a career high.

Williams, on Tuesday, spoke of how the Rams’ bigs would play an important role Wednesday, and Stockard answered the call.

Tsohonis’ night marked his best in a VCU uniform so far, since transferring from Washington this past offseason. He was 0 of 6 from 3-point range entering the day Wednesday, before he hit his three treys against the Orange.

And his 12 points were a season high, besting the 7 he had against Wagner. He battled a groin injury coming out of the preseason, into the beginning of the season.

"Of course it feels good,” Tsohonis said of his outing. “I know I've been struggling a little bit. Just been going through some things. So, me just going out there, just playing my game, just trusting my teammates, getting me the shots. And just playing hard. And everything was going to come.”

VCU, in the first half, took a few minutes to find its bearings against the Syracuse zone, but improved as time wore on, working the ball into the middle or shooting 3s over it.

The Orange rolled out to a 7-2 lead in the first four minutes, behind two baskets from Jimmy Boeheim and one from brother Buddy Boeheim.

However, one of the issues that has plagued VCU — turnovers, particularly of the unforced variety — reared its head down the stretch. The Rams gave the ball up on four straight possessions as one point.

And though they defended the Orange well — with three and a half minutes to go before the half, Syracuse was 0 of its last 9 from the field — the giveaways allowed for an opening.

And Syracuse went on a 9-0 run late in the half, which included a 3 from Joseph Girard III, who entered the day leading the nation in 3-point shooting percentage (81.3%, 13 of 16). Tsohonis snapped that with a jumper before the halftime buzzer, but VCU trailed 27-23 at that point.

Buddy Boeheim finished with 20 points, and Jimmy Boeheim 17. The primary point in the Rams’ defensive game plan Wednesday was to limit 3s, and they held Syracuse to 5 of 23 overall in that category, 2 of 10 in the second half. That was a season worst for the Orange.

Rhoades, afterward VCU's game, expressed his excitement for his team. For a group that has endured some adversity, and that was coming off a loss at home, Wednesday could provide a valuable jolt into the rest of the Battle 4 Atlantis and the rest of the nonconference schedule overall.

“I'm just so proud of our team,” Rhoades said, “maybe the proudest I've ever been.”