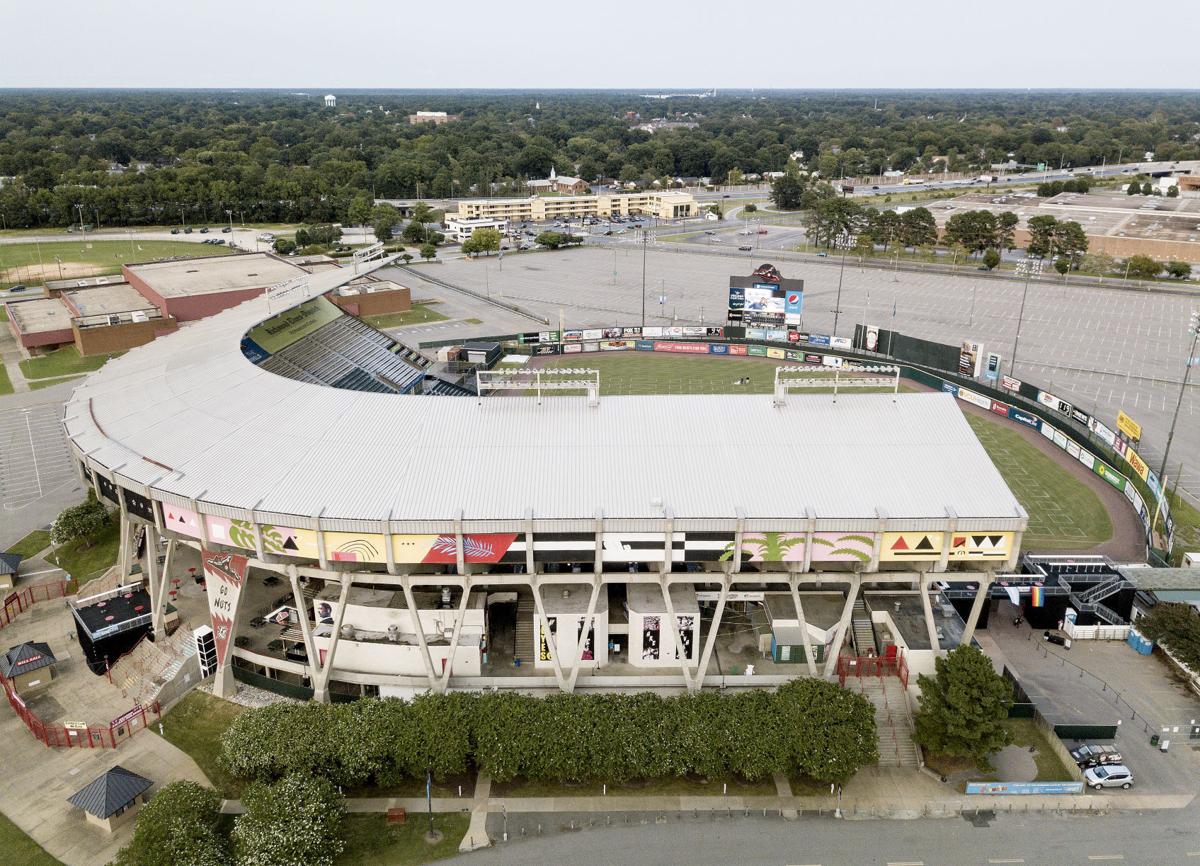 The Diamond has been home to professional baseball in Richmond since 1985. 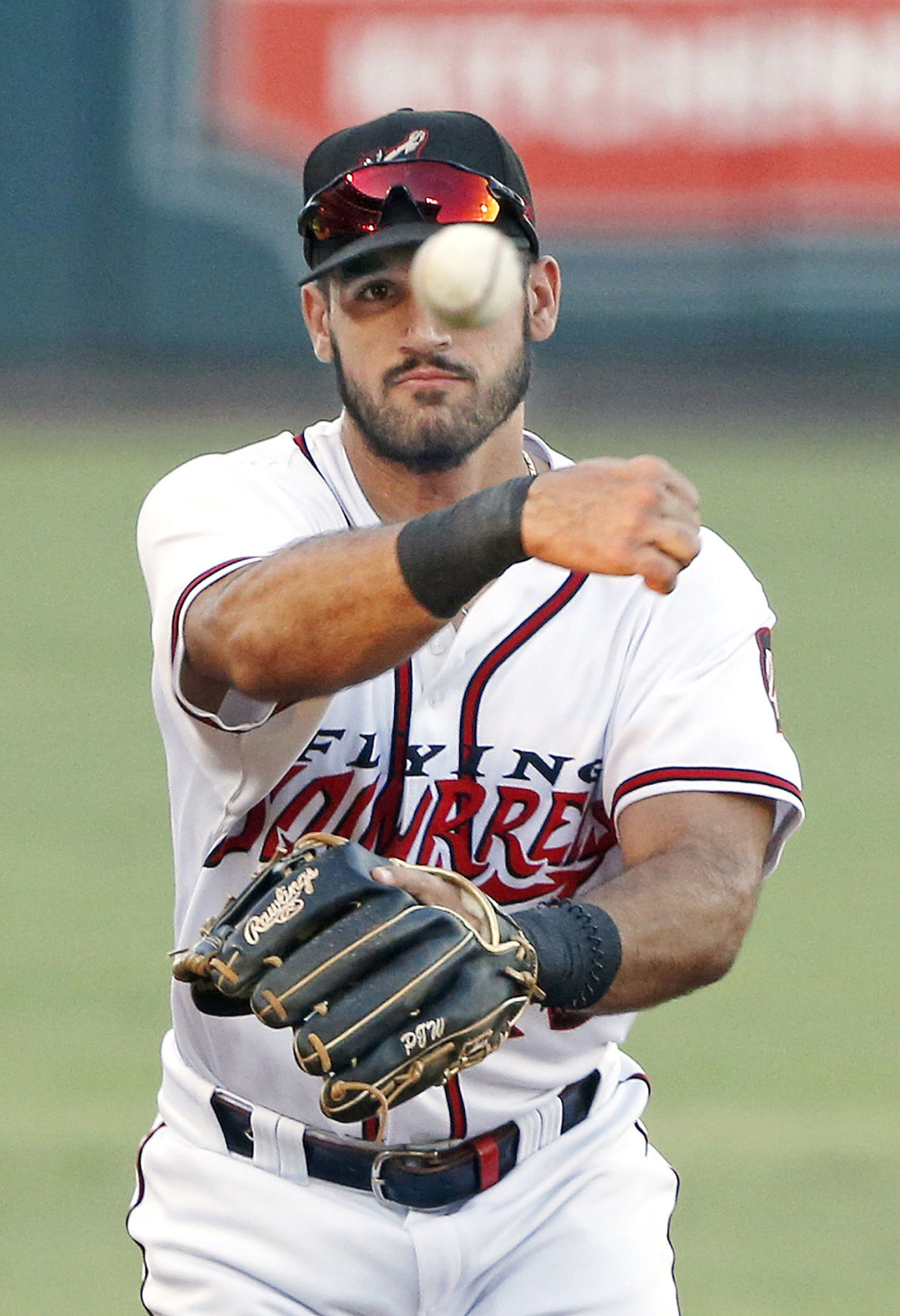 David Villar of the Flying Squirrels throws to first base for an out in the second inning Thursday against Akron at The Diamond. 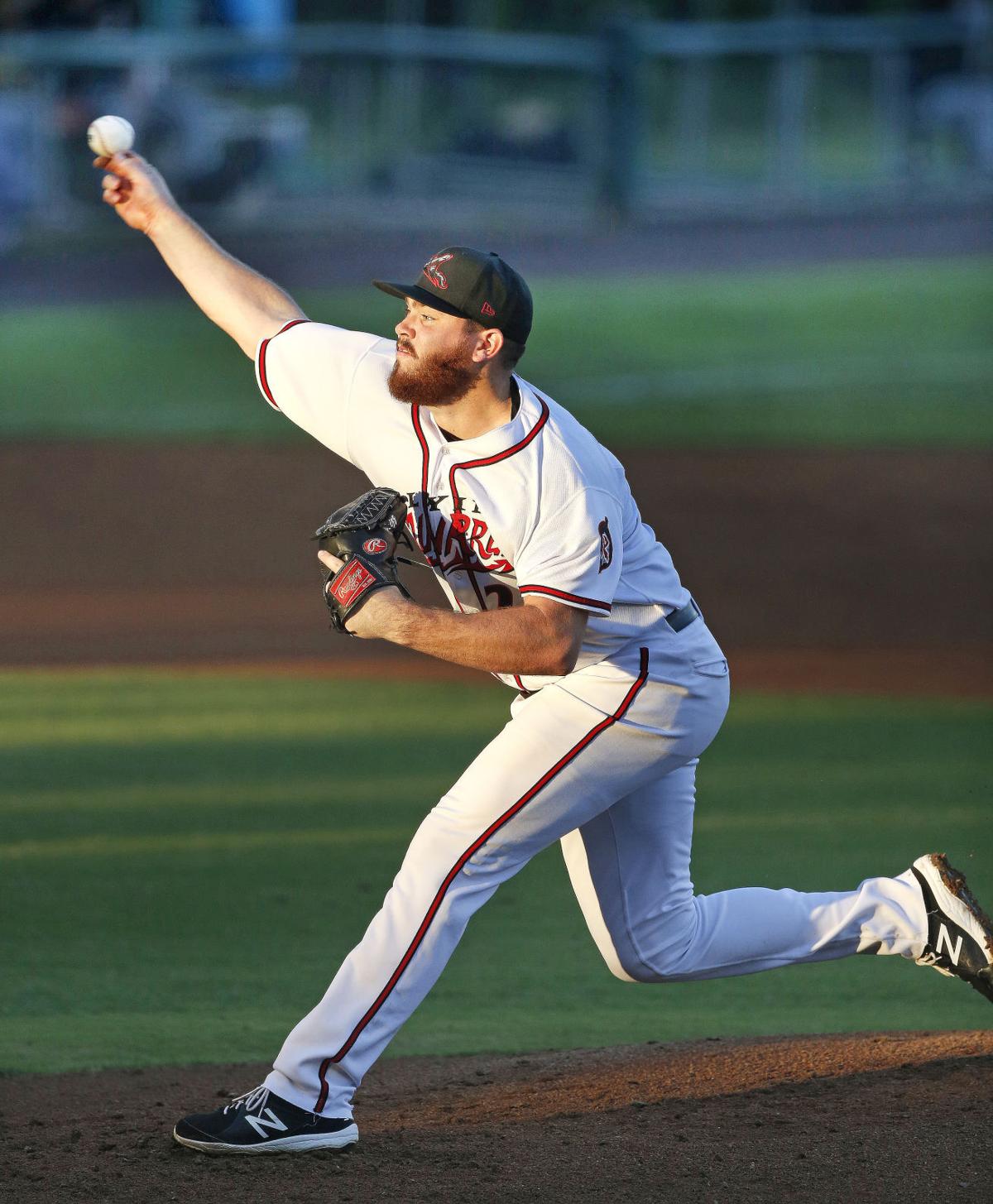 Squirrels' Matt Frisbee pitches to the Rubberducks at the Diamond Thursday, September 9, 2021. 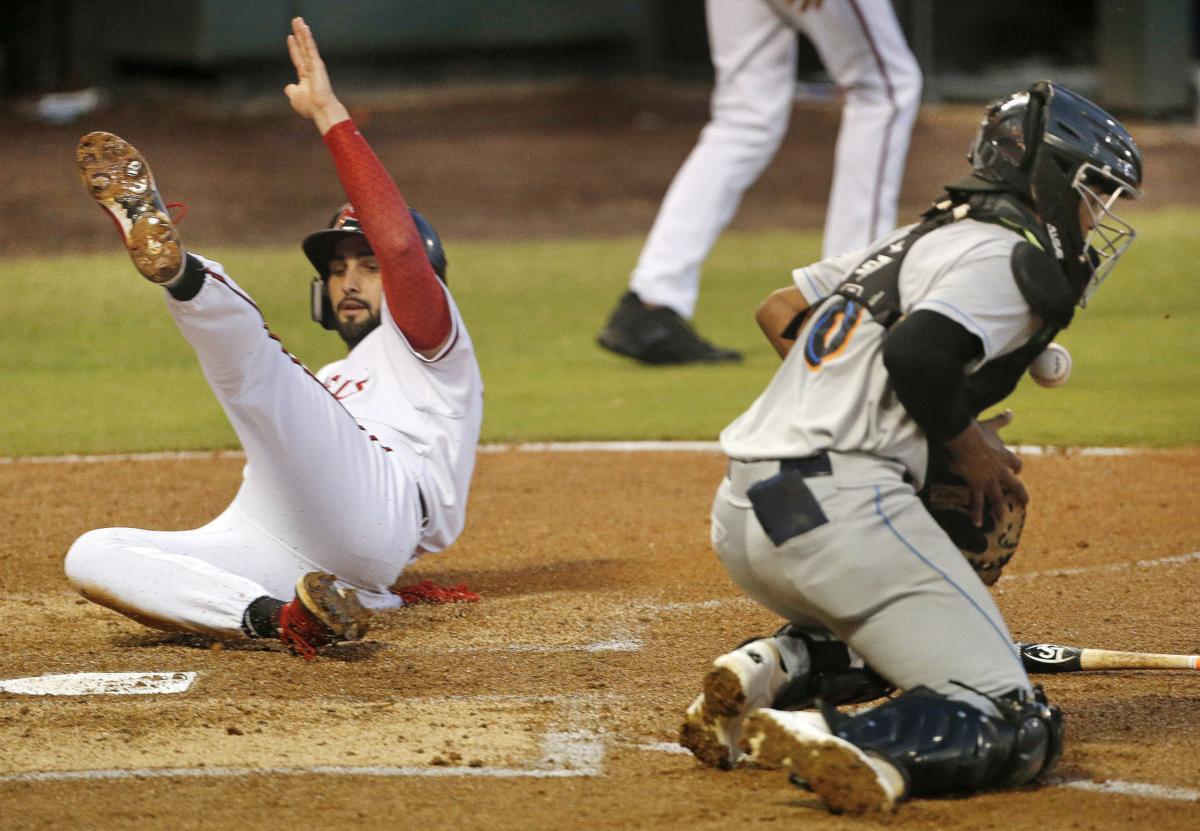 Squirrels' Frankie Tostado makes it safely home past Rubberducks' Eric Rodriguez in the third inning at the Diamond Wednesday, September 8, 2021. 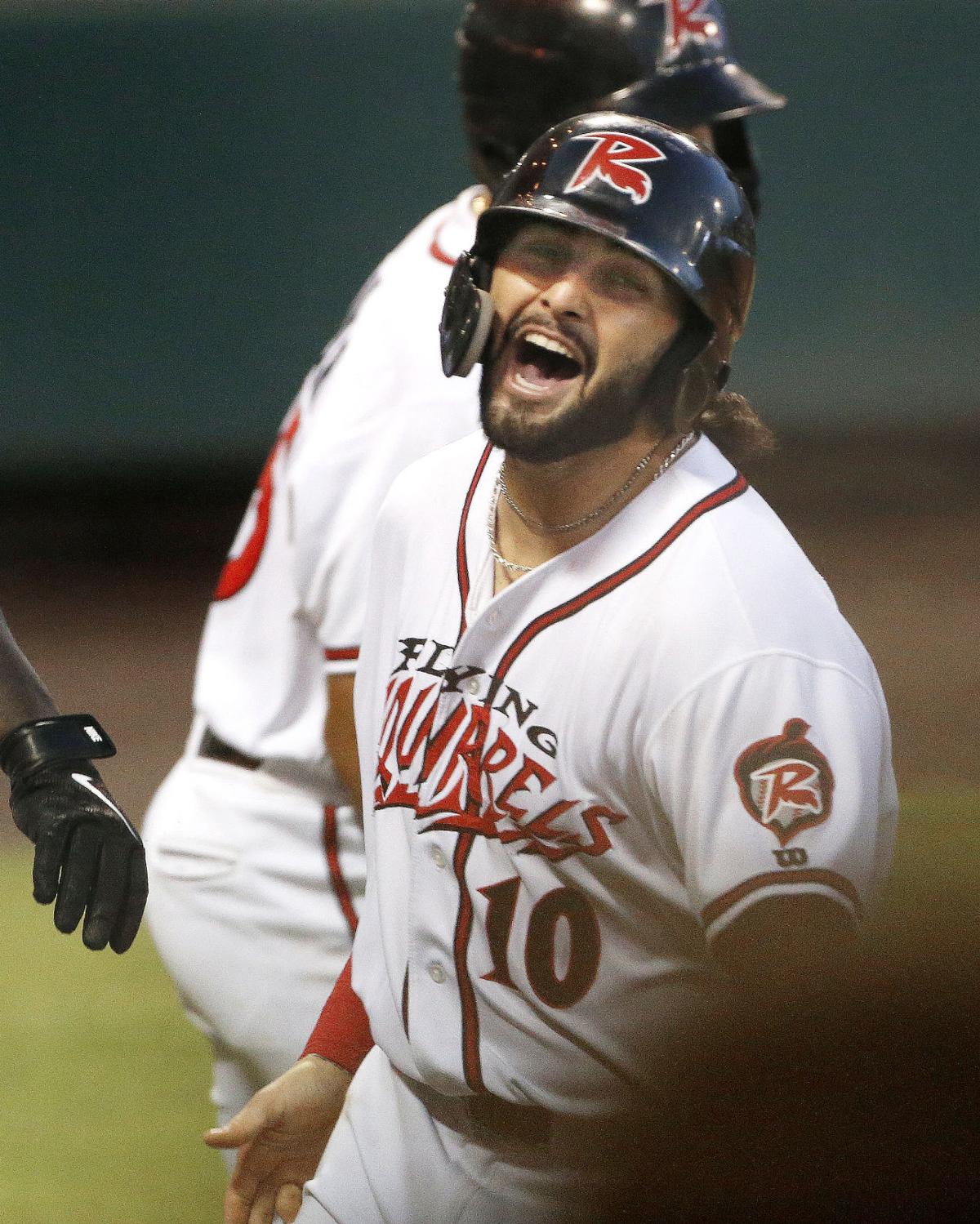 The Richmond Flying Squirrels’ 2021 home schedule closes Sunday and it appears the Double-A franchise that was largely drawn to the city by the 2009 pledge of a new ballpark may complete another season without a firm plan for The Diamond’s successor. The Flying Squirrels season ends on the road, at Erie, on Sept. 19.

Richmond could be closing in on a stadium strategy embedded in a massive mixed-use development project around Arthur Ashe Boulevard. A ballpark shared by the Flying Squirrels and VCU’s baseball program is expected to be the centerpiece of the university’s Athletics Village along the Hermitage Road corridor. A formal announcement from the city may come this fall, or soon thereafter.

“We have consistently stated that our goal is to issue a request for offers for the redevelopment of the 60-acre site off North Arthur Ashe Boulevard before the end of the year, and that has not changed,” Jim Nolan, press secretary for Richmond Mayor Levar Stoney, wrote Wednesday in an email response to an inquiry from The Times-Dispatch.

Requests for proposals announce a project, solicit bids from contractors, and typically provide a timeline and financing details. Ed McLaughlin, VCU’s vice president and director of athletics, and Flying Squirrels CEO Todd Parnell on Sept. 15 will discuss developments at the invitation of the Greater Scott’s Addition Association.

As the long runway to Richmond’s future ballpark extends …

The Diamond, which opened in 1985, does not meet the standards of Major League Baseball, which controls the minor leagues, mostly in stadium spots with which fans are unfamiliar. The Diamond lacks spacious clubhouses, coaches’ rooms, a lounge, a kitchen and dining area, modern strength-and-conditioning areas, indoor batting cages, a video room, and quarters for female staffers.

Failure to comply could eventually lead to expulsion from affiliated baseball. The Flying Squirrels president, Lou DiBella, earlier this season told The Times-Dispatch, “We need to be playing in a new stadium no later than 2025. Period … I think everybody knows the stakes, and I don’t think anybody wants us to go anywhere.”

Speaking of MLB executives involved in supervision of the minors, DiBella said, “I think they desately want a new stadium in Richmond and for baseball to be in Richmond for the foreseeable future.”

MLB representatives declined the opportunity to comment. The Flying Squirrels will be back in Richmond next season. In late August, MLB announced the team’s 2022 schedule.

In a Tuesday interview, Flying Squirrels manager Jose Alguacil praised the team’s management and fans, but acknowledged that The Diamond has issues apart from the absence of modern amenities for player development. He mentioned that often when it rains, there are buckets in the home and visitors clubhouses catching ceiling leaks, also a problem in the press box. Design flaws and age-related defects are apparent throughout The Diamond.

“The sooner the better,” Alguacil said, referring to a new ballpark. “It can be very beneficial for the city.”

The VCU Athletics Village will include a tennis complex, a track, a soccer stadium, practice fields, a field house and parking, according to Richmond 300, a city government organization that provides a guide for growth leading into Richmond’s 300th birthday in 2037. The Richmond 300 blueprint places a new ballpark on The Diamond’s side of Hermitage Road, at approximately the location of Sports Backers Stadium.

On the opposite side of Hermitage Road, a major land parcel will be vacated with the shift of all Virginia Alcoholic Beverage Control Authority warehouse operations to Hanover County, a move expected to be concluded early next year. VCU acquired land in the vicinity, adding to the ABC parcel it will purchase from the state.

What we don’t know

The Diamond was built during one offseason, for $8 million. A minimum of 18 months would probably be required to build its successor, and the price could be between $60 million and $80 million. There has been no announcement describing a funding plan. It seems VCU and the Flying Squirrels will be the project’s primary investors, with the city and surrounding counties contributing in some forms. The Flying Squirrels could lease the stadium from landlord VCU.

There also has been no announcement regarding a capacity. The Diamond, with advertising banners covering thousands of upper-deck seats, holds 9,560. A new ballpark will likely be smaller, in physical scope and capacity, maybe in the 6,500-seat range with a grass outfield berm on which fans could also sit.

When might the stadium piece of the VCU Athletics Village be completed? Almost certainly, DiBella, the Flying Squirrels president, did not pick that 2025 target date out of the air.

The Diamond has been home to professional baseball in Richmond since 1985.

David Villar of the Flying Squirrels throws to first base for an out in the second inning Thursday against Akron at The Diamond.

Squirrels' Matt Frisbee pitches to the Rubberducks at the Diamond Thursday, September 9, 2021.

Squirrels' Frankie Tostado makes it safely home past Rubberducks' Eric Rodriguez in the third inning at the Diamond Wednesday, September 8, 2021.