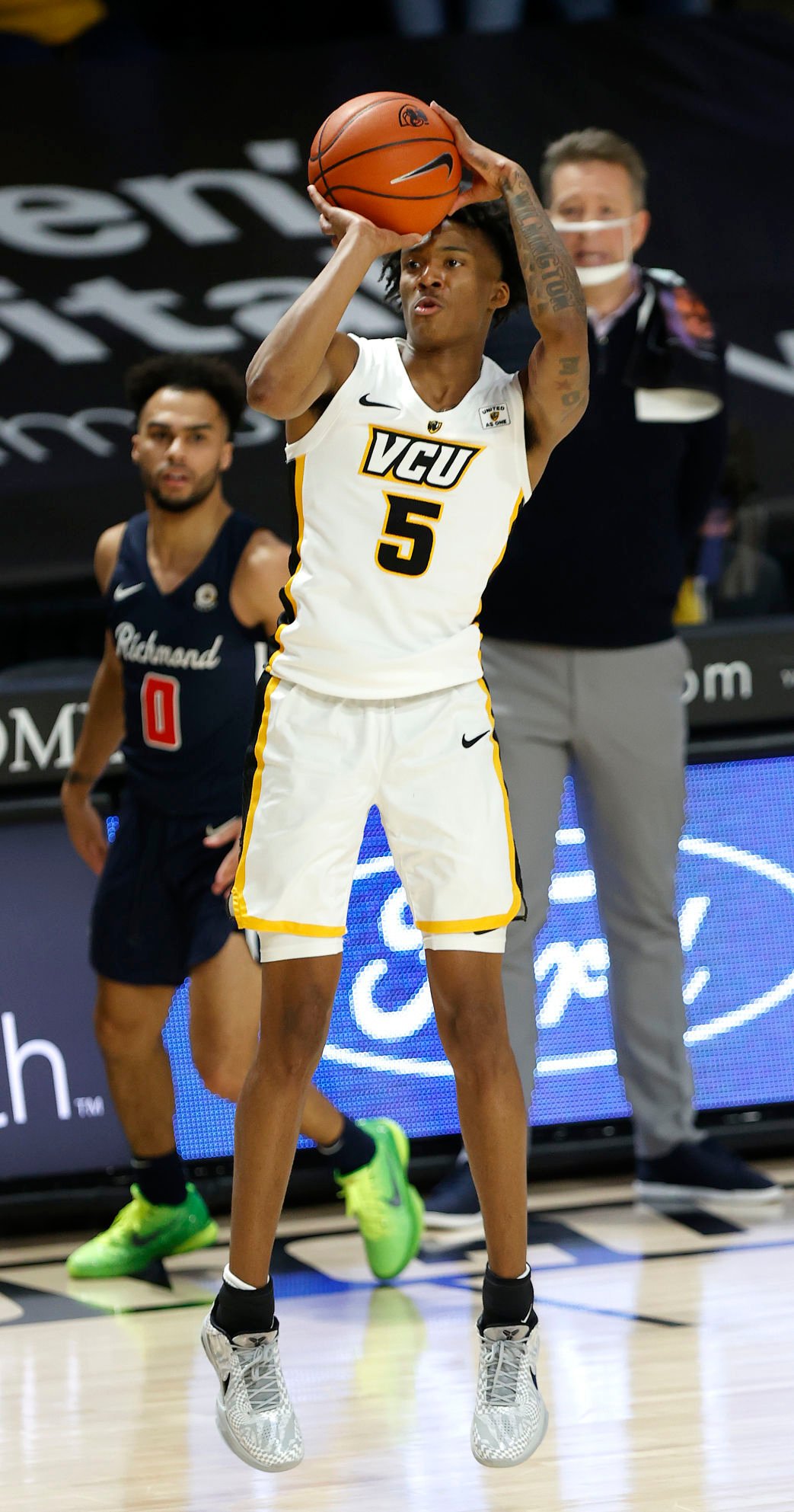 VCU sophomore guard Bones Hyland is on day-to-day status with a sprained foot. He’s averaging 19.2 points, third in the Atlantic 10. 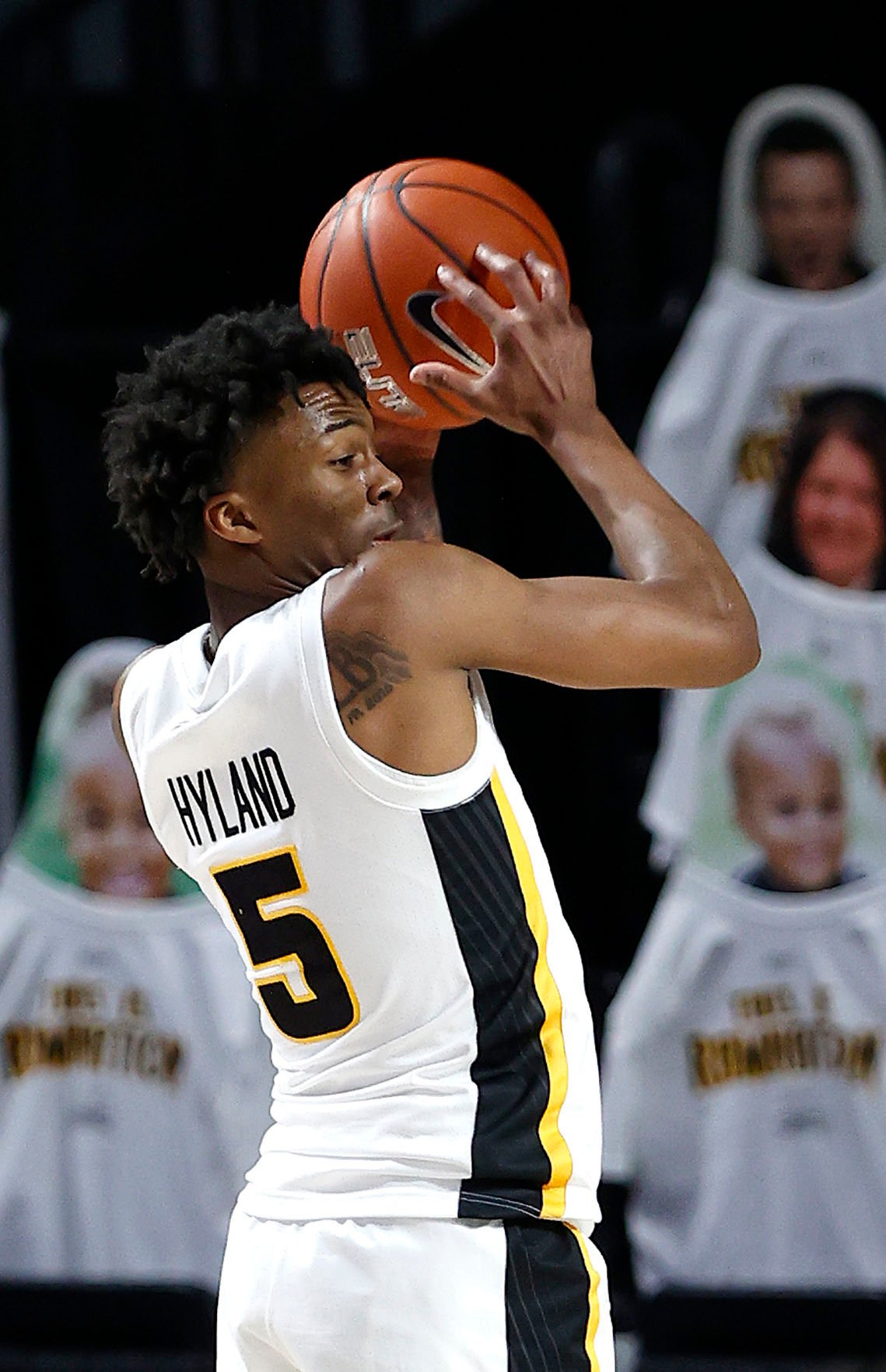 VCU’s Bones Hyland ranks second on the team in steals with 41 and third among the Rams in rebounds with a 4.4 average.

VCU received some good news over the weekend about injured star Bones Hyland, but will have to make do without him for the time being.

Coach Mike Rhoades said Monday morning that X-rays and an MRI on Hyland’s right foot, which he hurt late in regulation against George Mason on Saturday, came back negative. The diagnosis is a sprain.

Hyland’s status will be day to day, though Rhoades said the sophomore guard has “some work to do to get back on the court.” Hyland will not play in the Rams’ matchup against Saint Louis on Tuesday night at the Siegel Center, and it’s too early to tell anything beyond that game.

“He did a good job over the weekend doing what the doctors and the trainer wanted him to do,” Rhoades said. “But he’s got some work ahead of him.”

Hyland has been the Rams’ leader this season, a natural scorer who showed his ability down the stretch last season as a freshman and has blossomed more fully this year. He’s performed at an Atlantic 10 player-of-the-year level, averaging 19.2 points to rank third in the league this season. The next closest Ram is junior wing Vince Williams at 10.2 points per game.

The 6-3, 173-pound Hyland also has improved on defense this season. He’s second on the team with 41 steals. The Wilmington, Del., native is averaging 4.4 rebounds, too, third on the team.

Tuesday will mark the first game he’s missed this season.

Hyland went down with a little more than two minutes to go in regulation Saturday against the Patriots. Rhoades said he saw Hyland roll his foot. He was in pain and had to be carried to the Rams’ bench before he walked back to the locker room.

Rhoades said other players will have to step up handling the ball in Hyland’s stead. Players such as Williams and freshman wing Jamir Watkins will handle the ball more, Rhoades said.

“We got to make sure we take care of the ball, and ballhandling is a huge key moving forward without Bones,” Rhoades said.

While adjusting to Hyland’s absence, VCU also needs to do a much better job on the boards than it did against George Mason on Saturday, when it was outrebounded by a season-high margin of 16 in a 79-76 overtime loss.

Rhoades said the Rams had a “colorful” film session Sunday, reviewing things like “unacceptable box-outs, guys not pursuing the basketball, opportunities to go get a clean rebound and we don’t.”

Saint Louis is the most effective rebounding team in the A-10, with a league-high margin of plus-8.4. Within that, the Billikens average an A-10-best 12.5 offensive boards.

Saint Louis’ rebounding efforts are led by senior guard Jordan Goodwin, who is averaging 10.4 boards, plus 14.6 points. Goodwin has played point guard for the Billikens recently, when sophomore Yuri Collins missed three games because of an ankle injury. Collins returned off the bench Friday at Dayton, but left late in the game.

Heading into Tuesday, VCU is tied with St. Bonaventure (9-3) and Massachusetts at the top of the standings with a winning percentage of .750. Winning percentage is a parameter the A-10 is using for tournament seeding this year, with teams playing uneven numbers of league games.

The Rams are simply seeking to control what they can with only Tuesday, and a game at Davidson on Saturday, left to close the regular season.

At least on Tuesday, they’ll have to do it without Hyland’s myriad contributions.

“A guy here doing a couple more things, a guy here stepping up,” Rhoades said. “And together you fill that void.”

VCU sophomore guard Bones Hyland is on day-to-day status with a sprained foot. He’s averaging 19.2 points, third in the Atlantic 10.

VCU’s Bones Hyland ranks second on the team in steals with 41 and third among the Rams in rebounds with a 4.4 average.