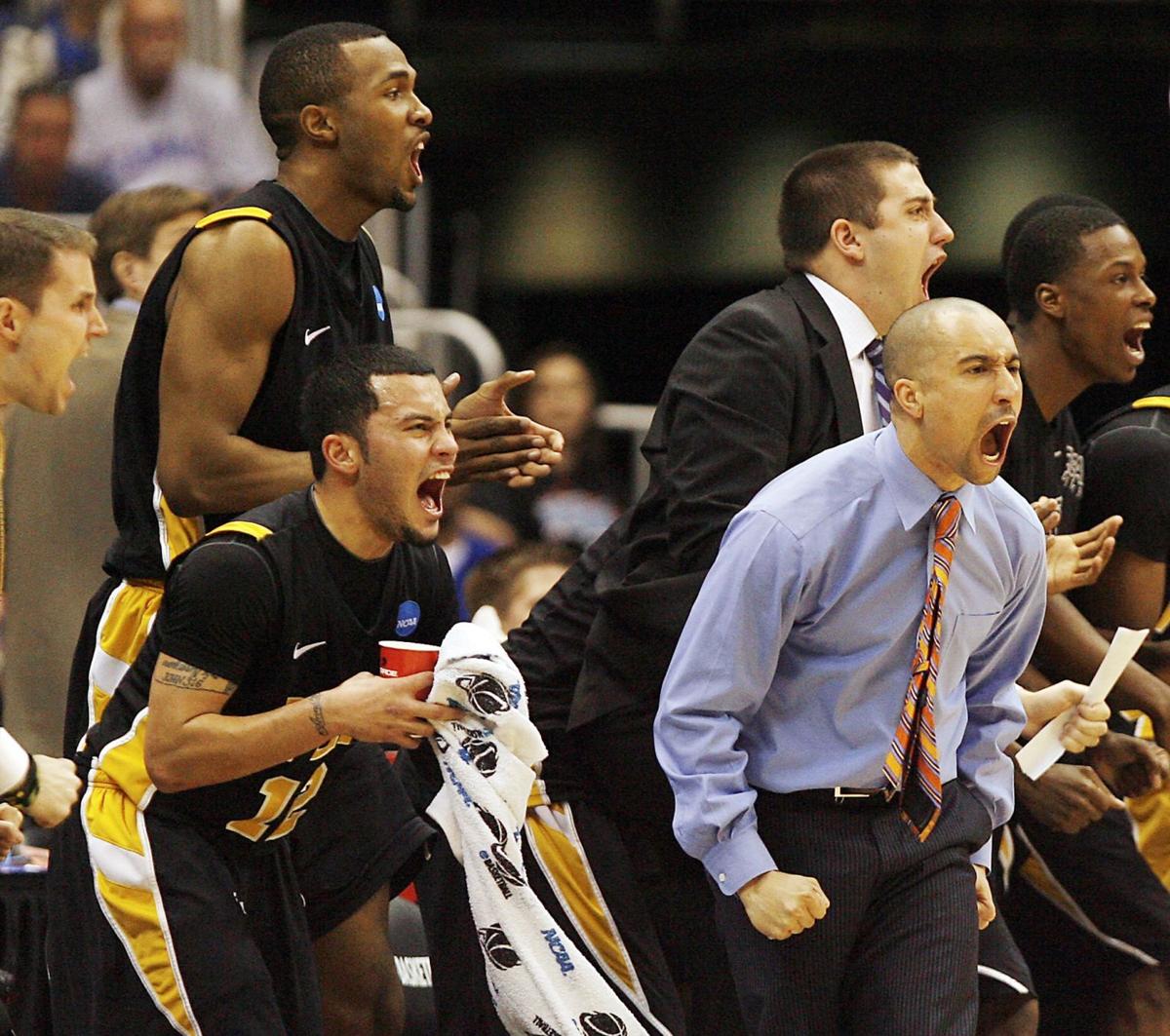 VCU’s bench got pumped during the first half against Kansas in the Southwest Regional final at the Alamodome in San Antonio. 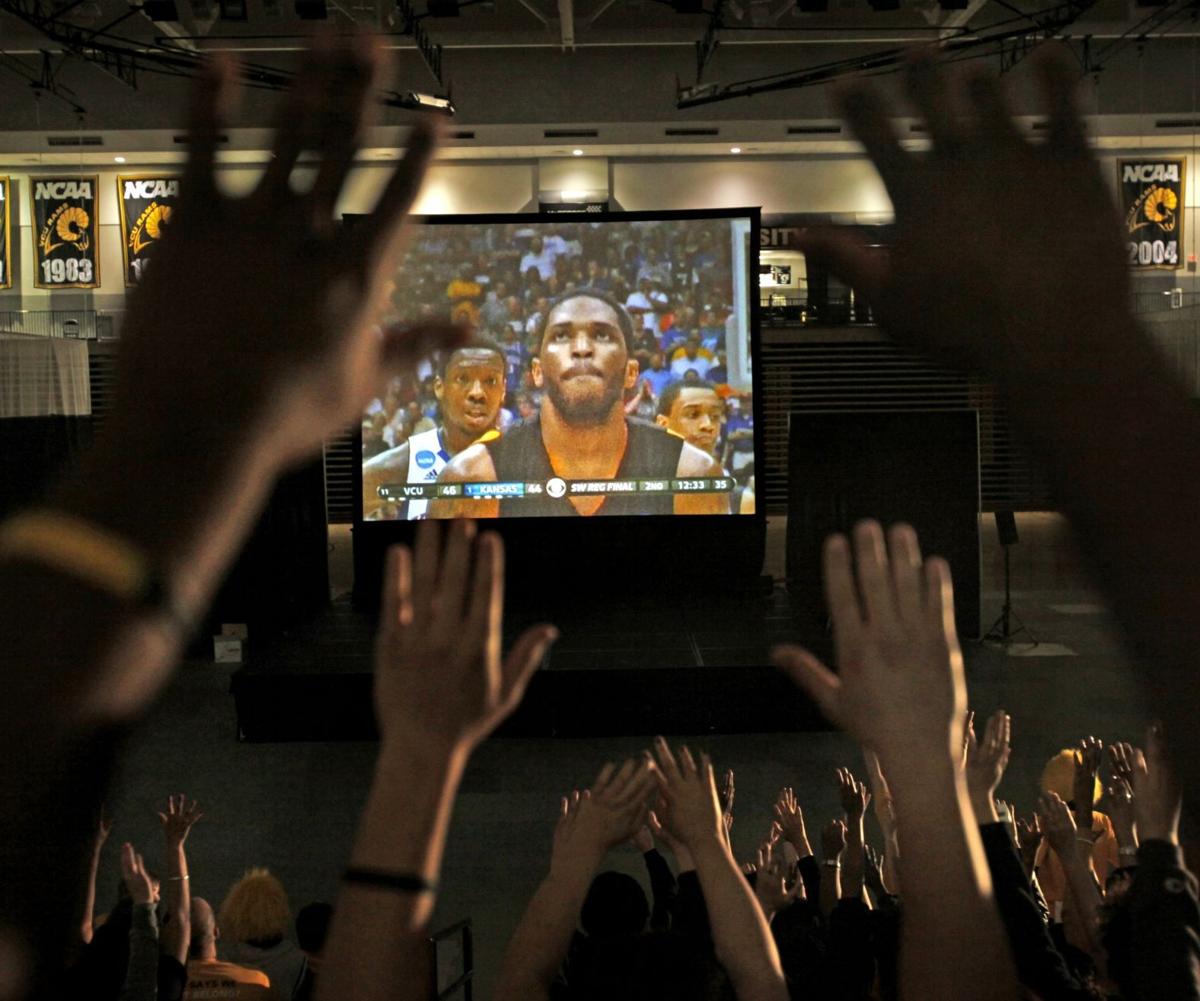 VCU fans hold up their arms in anticipation of Jamie Skeen sinking a foul shot as they watch the NCAA tournament on a big-screen TV in the Siegel Center. The Rams beat USC, Georgetown, Purdue, Florida State and Kansas before falling to Butler in the Final Four.

This story is the third in a series looking back at VCU's 2011 run to the Final Four, and the impact of it, 10 years later.

The night of the NCAA tournament selection show in 2011, after VCU made the field, coach Shaka Smart held a team meeting.

Earlier in the evening, sophomore guard Darius Theus was on the highway headed home to Portsmouth. He was driving when he found out the Rams were selected to the Big Dance but turned around and rushed back toward Broad Street to make the ensuing meeting.

Theus did make it back in time. And the meeting, he said, was like a breath of fresh air.

Uncertainty and, perhaps, doubt about VCU’s chances of making the tournament were replaced by opportunity.

As Rozzell described it, the Rams came out guns blazing against USC in the First Four, wanting to send a message that they were there and that they were going to try to make the best of the opportunity.

And their message, as they danced through the tournament to the Final Four, came through loud and clear.

“One thing about that team and one thing about the guys on that team, as well as the coaching staff — I think it still shows today with coach [Mike] Rhoades at VCU — nobody really cared who lined up across from us,” Rozzell said. “I think that’s just the way we were recruited, I think.

Against the Trojans to open, a standout defensive performance keyed VCU’s victory. The Rams held USC to a season-low 46 points, limited the team to 39.5% shooting overall and won the rebounding battle 40 to 31.

Asked if there was a point in the tournament when the Rams felt like they were rolling and could get deep into the tournament, Nixon said, with a laugh, “When we played. The first game we played.”

“We had something to prove but, at the end of the day, we were playing so loose and relaxed because we were playing with house money. We just went out there and we knew we can play and we’re going to see,” Nixon said. “If you’re that good, you’re going to have to show us.”

Eleventh-seeded VCU then moved on to play sixth-seeded Georgetown in the Round of 64 at the United Center in Chicago. Hoyas guards Austin Freeman, Chris Wright and Jason Clark were averaging 17.9, 13.1 and 12.1 points, respectively, entering that game.

Smart showed his team tape of ESPN bracketologist Joe Lunardi saying that the Rams couldn’t guard Lunardi, earlier in the day before the game. And it proved apt motivation.

And Rozzell exploded for 26 points, including six of the Rams’ season-high 12 3-pointers. That was the game the Richmond native earned his nickname as the “mayor” of Richmond — from ESPN’s Dick Vitale, Rozzell said.

The Rams’ dominance in that game had an important effect.

“Their confidence even went higher, through the roof,” said Rhoades, a Smart assistant in 2010-11.

That carried over into the Round of 32 game, back at the United Center against No. 3 seed Purdue, which was ranked 13th in The AP Top 25 and included Big Ten player of the year JaJuan Johnson. He and fellow all-Big Ten first-teamer E’Twaun Moore combined to average 38.6 points — 20.4 points per game from Johnson and 18.2 from Moore.

And though Johnson got 25 points and 14 rebounds against VCU, Nixon helped limit Moore to 10 points on 5 of 15 shooting from the field. And the Rams had six players finish with double-figure points, led by 23 points and eight rebounds from Bradford Burgess, in a 94-76 win.

Rodriguez was one of those, with 12 points and 11 assists, with no turnovers.

Skeen called Rodriguez the “head of the snake” for the Rams.

“You got to have somebody who’s like a small extension of Coach Smart on the court,” Skeen said. “And that was Joey Rodriguez.”

The victory put VCU in the Sweet 16 for the first time in school history. Up next was No. 10 seed Florida State, a matchup that yielded a thriller.

The Rams pulled out a “magic trick” in that game at the Alamodome in San Antonio, as Rodriguez said afterward. The Seminoles were stout defensively, holding opponents to a nation-best 32% shooting.

VCU, though, led most of the way, from midway through the first half on. The team tied the season high of 12 3s. But the Rams went cold down the stretch. Florida State inched back from a 7-point hole, mostly at the free-throw line.

With 45 seconds to go, the Seminole’s Chris Singleton hit a 3 to tie the game at 65. It headed to overtime.

In the extra frame, Rodriguez threaded an inbounds pass through two defenders to Burgess, who laid the ball in with 7.1 seconds to play to put VCU up by 1. On the opposite end, a last try from Singleton was blocked by Rob Brandenberg. The Rams won 72-71.

“There was a lot of times in that game where Florida State could’ve just took off and we could’ve kind’ve caved in and said, ‘Oh, we’ve done enough.’ And we didn’t do that, we kept fighting,” Rodriguez said. “And the whole ending and that whole ordeal, I’ve never been a part of something like that.”

A true David vs. Goliath game was ahead in the Elite Eight. VCU had to face the only remaining No. 1 seed in the field that year: Kansas. Right before the game, the Jayhawks added more fuel to a VCU fire that didn’t need it.

Kansas had the standout Morris twins at the time, Marcus (averages of 17.2 points, 7.6 rebounds) and Markieff (13.6 points, 8.3 rebounds). When Rodriguez and Rozzell went to the pregame meeting of the captains, one of the twins said that VCU’s run was about to end there.

When word got back to Smart, the coach began hopping around and got excited, Rodriguez said.

Then how the Rams played was a sign of their identity as a group, Rodriguez thought.

“We thought we could beat anybody,” he said.

After leading by 14 at the half, VCU withstood a Kansas comeback to start the second half, when the Jayhawks cut it to 2 at the 13:11 mark. Free throws from Skeen and a layup from Theus pushed the advantage to 6. It never dipped below 4 again in a 71-61 victory at the Alamodome. Skeen had 26 points and 10 rebounds. Rozzell had 12 points. VCU, again, made 12 3s.

The Rams were in the Final Four. And on Rozzell’s birthday, no less.

“It was surreal for me to beat a team on that level,” Rozzell said. “And of course the way it affected Richmond. Me being from Richmond, to do something like that for my city, it was a big deal.”

Back in Richmond, thousands of VCU fans flooded Broad Street to celebrate. A couple thousand more came out by the Siegel Center three days later to send the Rams off to Houston for a Final Four matchup against eighth-seeded Butler at what’s now NRG Stadium.

After running through a string of high-major programs, VCU had to meet another mid-major, albeit one that made the national championship game the year prior.

But, from Theus’ view, the Rams’ demeanor changed heading into the Butler game.

Rozzell felt like the Rams let their guard down.

“I think if we would’ve got one of the bigger teams on the other side it would’ve kept that underdog mentality for us a little stronger,” Rozzell said.

Rhoades said when he and Smart talk now they still get mad about the Butler game. It’s the same for Rodriguez.

“I wanted to win the whole thing,” Rodriguez said. “So, at this time of the year, yeah, that stuff still comes up and still bothers me.”

Despite the disappointment, VCU was welcomed back to Richmond by about 150 fans outside the Siegel Center.

And the seeds of the Final Four’s longer-term impact were just sown.

“That was one of those times where you just wish that you could press the pause button and soak it in even more,” Smart said of the Rams’ run. “So it was a ton of fun. It’s hard to believe it’s been 10 years.”

VCU’s bench got pumped during the first half against Kansas in the Southwest Regional final at the Alamodome in San Antonio.

VCU fans hold up their arms in anticipation of Jamie Skeen sinking a foul shot as they watch the NCAA tournament on a big-screen TV in the Siegel Center. The Rams beat USC, Georgetown, Purdue, Florida State and Kansas before falling to Butler in the Final Four.