Subscribe
Read Today's E-Edition
Share This
Virginia got the tough tests it sought in Las Vegas tournament, a pair of big wins
0 Comments
Share this
Presented By 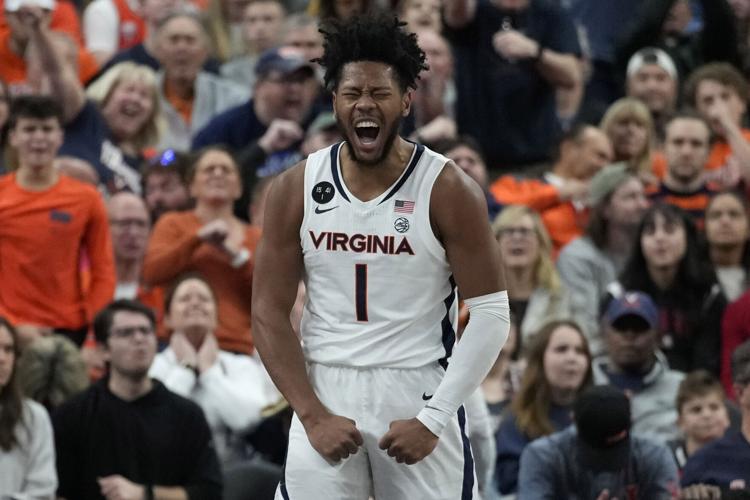 Virginia’s Jayden Gardner flexed in celebration during Sunday’s win over Illinois in Las Vegas. Gardner said the weekend wins over Illinois and Baylor, both ranked foes, were different but valuable for the Cavaliers. 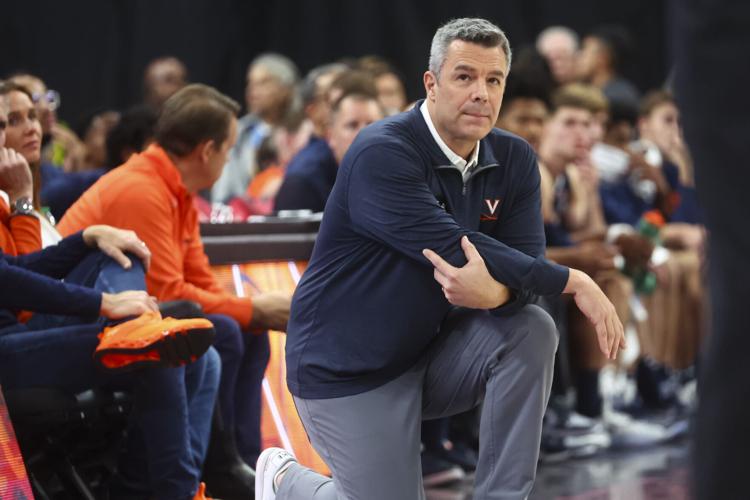 Tony Bennett’s Cavaliers are third in the ACC in scoring defense, a typical level of defensive strength for UVa, but the offense has shown significant improvement.

After his team’s championship game victory over Illinois on Sunday in the Continental Tire Main Event in Las Vegas, Virginia basketball coach Tony Bennett talked about the value of the weekend’s experience.

“I remember some people traveled a long way to convince us to come,” said Bennett, looking at a cluster of tournament officials in the back of the room at T-Mobile Arena. “We just said, ‘Boy this field is a good one.’ You want to put yourself in those spots because you learn a lot. These games in this setting create a unique environment that is something you want to get to as the season goes on.”

With a veteran roster that includes his top six starters all back from last year’s team, Bennett put together a schedule for the 2022-23 season designed to challenge the Cavaliers, to have them tested and ready for an expected return to the NCAA tournament.

Most encouragingly, UVa was good on both sides of the ball during dominant stretches that led to both wins. Against Baylor, the Cavaliers used a 30-5 run to start the second half to grab control of the game, hitting 7 3-pointers in less than 10 minutes and stifling Baylor on the defensive end.

Against Illinois, Virginia turned up its defense in the final 3:38, forcing six missed shots and three Illini turnovers and outscoring its opponent 14-3 in that stretch.

“Baylor was a different game. We blew them out and then they came back,” said forward Jayden Gardner after the Illinois win. “This game, we were neck and neck the whole time. So, different games and good experiences.”

Said junior guard Reece Beekman: “Just adversity. We’re going to need that for later in the season and farther into the tournament run for us. Just having these good games under our belt in this type of environment is really going to help us to succeed at a high level.”

So far, UVa (4-0) ranks third in the ACC in scoring defense, no surprise there, allowing 60.8 points per game. The Cavaliers have been equally impressive, though, on the other end of the floor, where they’re fourth in scoring (79.5 ppg.). That’s up 17.1 points per game from last season.

Virginia’s challenging nonconference schedule isn’t complete. After hosting Maryland Eastern Shore on Friday night, it plays at Michigan on Nov. 29 in the ACC/Big Ten Challenge, and hosts Houston — which moved up to No. 2 in the nation this week — on Dec. 17.

The Cavaliers also have a non-conference home game against James Madison, which beat UVa in Harrisonburg last season, on Dec. 6. In between Michigan and JMU, Virginia hosts Florida State in its ACC opener on Dec. 3.

“We’ve been really good but I know there’s another gear we can reach,” said Gardner. “We’ve still got two big tests ahead.”

Gardner said, off the court, having five days in Las Vegas as a team was a good bonding opportunity to enhance team chemistry. And the results on the floor could have a big impact, he noted, on Selection Sunday.

“You get great seeding in March by getting these high level, quality wins. Quad 1 wins,” said Gardner.

Teel: A Sun Belt East title for JMU would be unofficial but stone-cold remarkable

Virginia’s Jayden Gardner flexed in celebration during Sunday’s win over Illinois in Las Vegas. Gardner said the weekend wins over Illinois and Baylor, both ranked foes, were different but valuable for the Cavaliers.

Tony Bennett’s Cavaliers are third in the ACC in scoring defense, a typical level of defensive strength for UVa, but the offense has shown significant improvement.