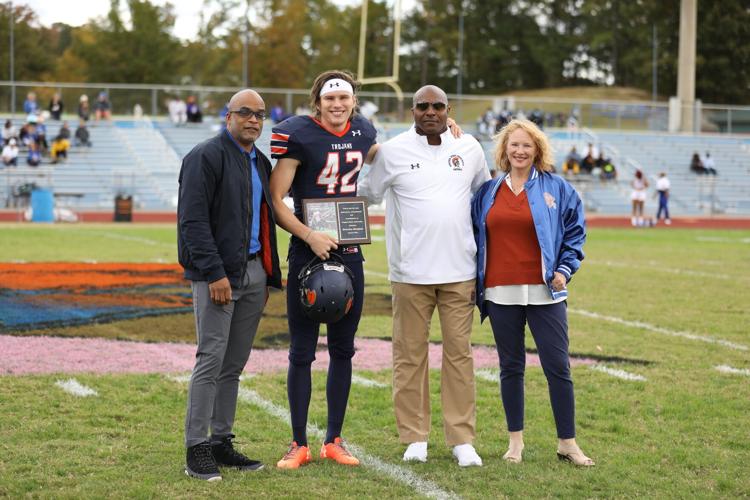 Trojans male student athlete of the year Nick Woolfolk made seven of nine field goal attempts this past fall. He was honored on the field this past fall alongside (left to right) VSU president Makola Abdullah; former football coach Reggie Barlow; and mother Cynthia Creasy Woolfolk. 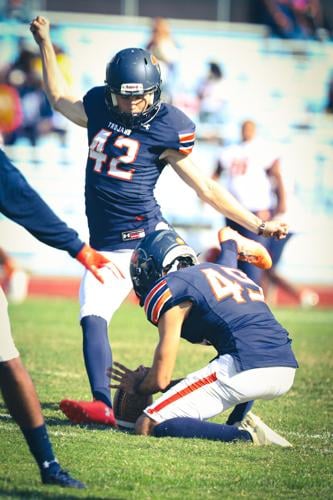 Trojans male student athlete of the year Nick Woolfolk made seven of nine field goal attempts this past fall. 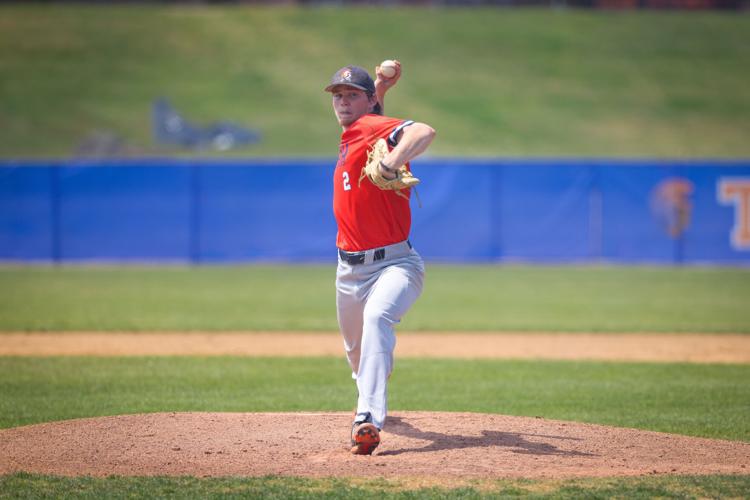 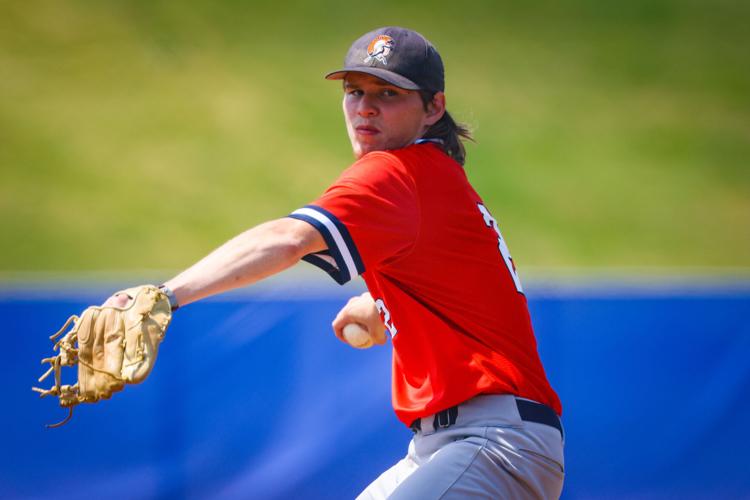 Nick Woolfolk played volleyball, football, soccer, basketball and baseball at Thomas Jefferson. He was VSU’s MVP in baseball after compiling a 3.04 ERA as a pitcher and hitting .297. 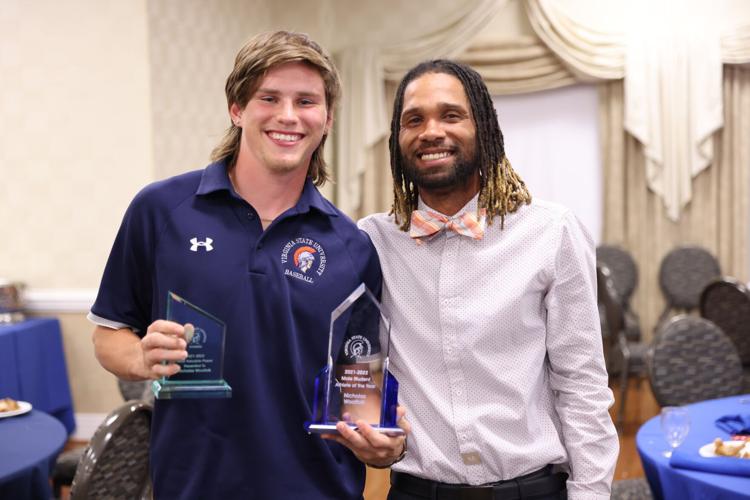 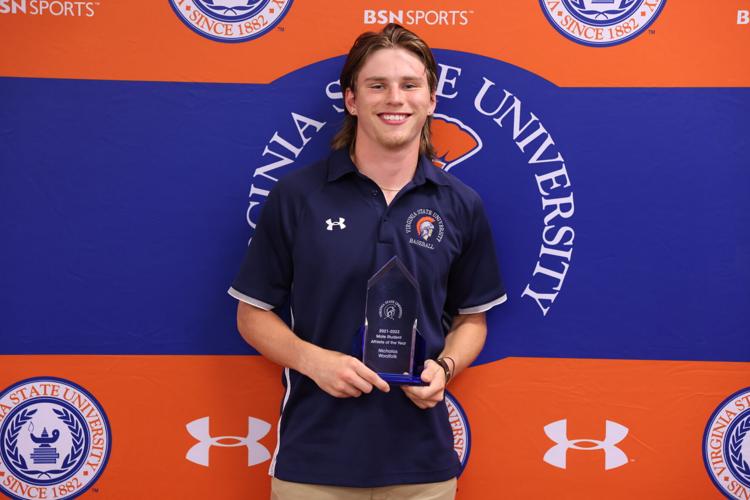 Growing up right behind The Diamond, Nick Woolfolk, a former five-sport athlete at Thomas Jefferson High, was inspired by Richmond-area athletics from a young age.

The 2021-22 Virginia State male student-athlete of the year and MVP of the Trojans baseball team went to plenty of Richmond Braves and Flying Squirrels games in his youth.

And that early connection with his local ballclub proved a foundation for a lifelong love of multiple sports which culminated this school year in standout showings on both the gridiron and the diamond.

“It was a great achievement. I couldn’t have done it without my teammates and coaches who’ve supported me,” said Woolfolk, who ended last semester with a 3.8 GPA and regularly does homework in the dugout between doubleheaders.

“We grew up playing sports every day after school. Growing up in Richmond was amazing for me — the athletic competition, the drive to be better was just always there with everybody.”

“I suited up, [Hornik] was a great coach, had a lot of faith in me and I really appreciate that, being a soccer kid coming to play football,” said Woolfolk, who has one year of eligibility remaining for both football and baseball and plans to kick for a Division I program this fall.

“I was a little nervous at first, but I settled into the role and I really appreciate [Hornik] for coming up to me because here I am now getting ready to pursue a D-I grad degree with football.”

Woolfolk originally attended Christopher Newport for football. But after unsuccessful attempts to secure a meeting with the basketball and baseball coaches there, he found a new home at VSU.

Woolfolk also tried out for the Trojans basketball team and was one of the last cuts at tryouts in back-to-back years, he said.

This past football season, he made 7 of 9 field goal attempts (misses from 59 and 36 yards), averaged 60 yards on kickoffs and had a 53-yard average on seven punts. His career long at VSU was a 42-yard field goal in his junior season.

On the baseball field, Woolfolk is a pitcher and corner infielder. The Trojans’ ace this year, he posted a 3.04 ERA with 58 strikeouts in 68 innings pitched. He hit .297 and played ample innings in the field.

“Shoutout to Coach [Harold] Henry for really teaching me a love for the game at Teejay,” Woolfolk said, adding that baseball was the first sport he played at 5 years old.

“The coaches here at VSU have been great, very accepting and understanding of my time, being able to go back and forth between each sport.”

Former Trojans football coach Reggie Barlow, who earlier this year took a job to coach in the XFL, played baseball growing up in Alabama, Woolfolk said.

“So [Barlow] loves him some baseball. He didn’t have any issues with me stepping up on the mound and helping VSU out in any way I could,” Woolfolk said.

“I can never thank him enough for being such a role model.”

Woolfolk graduated from VSU last fall and has been working on his first semester of grad school studying sports management. He plans on athletics being an integral part of his adult life, too, and sees himself as an athletic director or working for a college conference as a media contact or schedule planner.

He has a couple offers on the table to kick for Division I football programs and is weighing his options with his recruitment still open. He hopes to play baseball as well wherever he ends up, though he’s being recruited as a kicker.

“As far as VSU last year, it was a great season to be a senior, help lead my team and have guys look up to me and really just be that role model to show them if you put in the time and dedication, stay true to yourself, have love for the game and get in the playbook, the world is yours and the opportunities are endless,” Woolfolk said.

“So I just want to be a beacon of hope for these guys that nothing’s impossible.”

Maryland denies UVA lacrosse revenge, and a shot at a three-peat, in NCAA blowout

COLUMBUS, Ohio — Virginia lacrosse had two months to stew over an 11-goal regular-season loss to Maryland back in March. This one, they’re stu…

BLACKSBURG — The Virginia Tech softball team was two outs away from beating Kentucky and advancing to the NCAA regional finals.

McFarling: At Virginia Tech, spring is now a thing

The Hokies clinched the ACC regular-season baseball title on Saturday afternoon, while the softball team competed in the NCAA tournament.

Trojans male student athlete of the year Nick Woolfolk made seven of nine field goal attempts this past fall. He was honored on the field this past fall alongside (left to right) VSU president Makola Abdullah; former football coach Reggie Barlow; and mother Cynthia Creasy Woolfolk.

Trojans male student athlete of the year Nick Woolfolk made seven of nine field goal attempts this past fall.

Nick Woolfolk played volleyball, football, soccer, basketball and baseball at Thomas Jefferson. He was VSU’s MVP in baseball after compiling a 3.04 ERA as a pitcher and hitting .297. 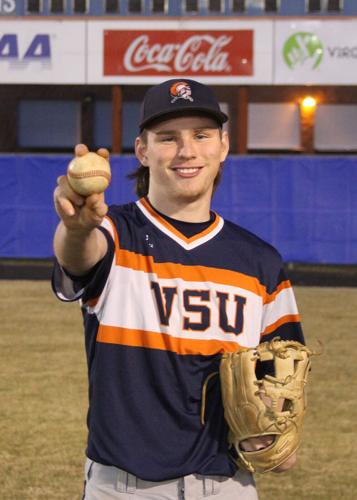