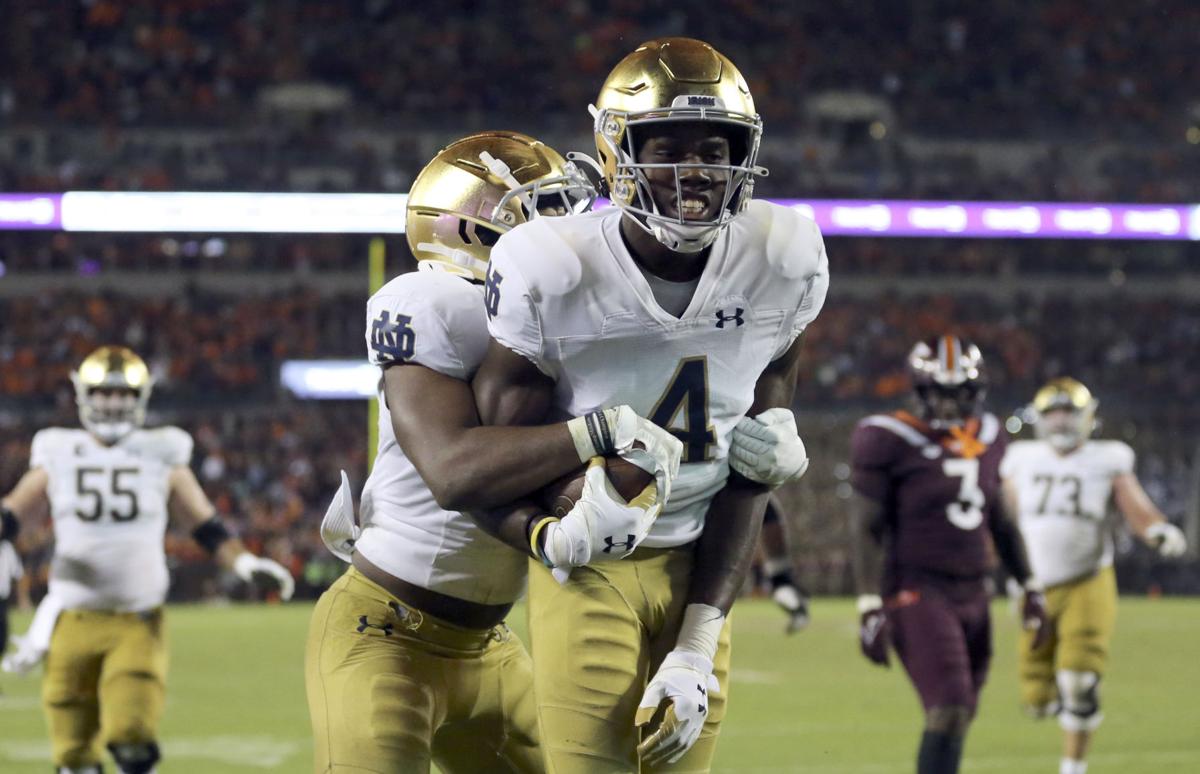 Notre Dame’s Kevin Austin Jr. celebrated catching a 2-point conversion pass to tie the game at 29-29 late in the fourth quarter of the Fighting Irish’s road win over Virginia Tech on Saturday. 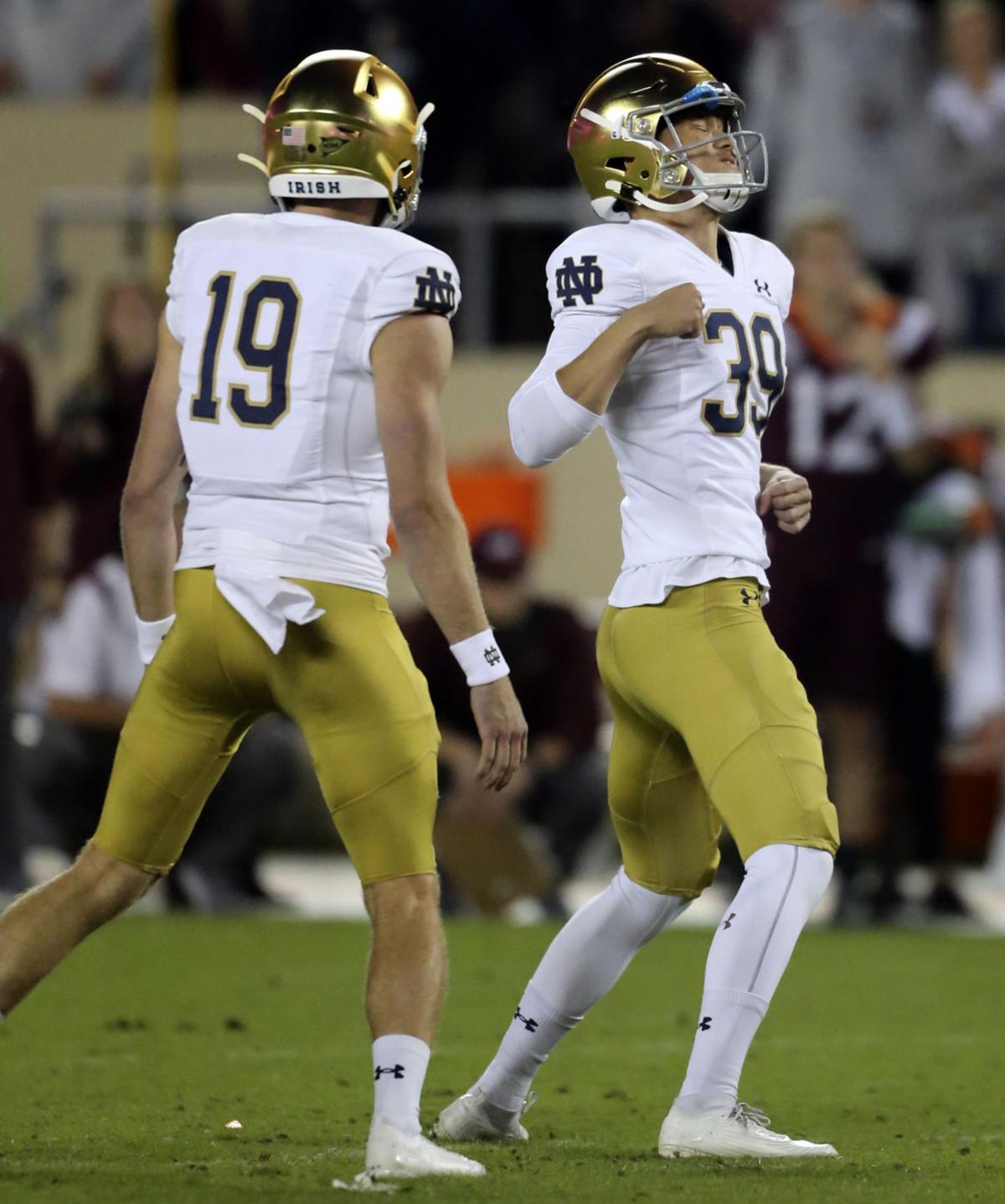 BLACKSBURG — As Kyren Williams picked and plowed his way through the Virginia Tech defense for a 10-yard touchdown run late in the third quarter, a terrifying truth became evident for the Hokies. Their defense, which had positioned them to upset 14th-ranked Notre Dame on Saturday night, was fading fast.

It was the beginning of the end for a Hokies’ defense that started the night in dominant fashion, but walked off the field with a 32-29 loss, unable to stop the Irish in the fourth quarter.

“We just didn’t execute as we were executing in the first half or the first three quarters,” senior defensive end TyJuan Garbutt said.

Starting with Williams’ scoring run, Notre Dame ran for 85 yards on its final 16 carries, picking up 5.3 yards per rush. Things only got worse when Hollifield, the unit’s interior leader, was ejected on the Irish’s third drive of the fourth quarter after a targeting call.

After that, Notre Dame (5-1) found success throwing the ball as well. Jack Coan, who came back into the game on the play on which Hollifield was ejected, went 6 for 8 for 88 yards from that point, including a 4-yard touchdown pass to Avery Davis with 2:26 to play.

Coan added a successful 2-point conversion pass to Kevin Austin to tie the game at 29-29. On Notre Dame’s final possession, Coan threw completions of 20 and 15 yards to set up the game-winning field goal.

“I felt like those last couple drives were the big ones,” Tech coach Justin Fuente said. “I don’t know if we ran out of gas, but it was drop-back pass every snap. They went back to the other kid who can obviously throw the ball and we didn’t play as well those last couple of drives.”

In all, the Irish racked up 156 of their 401 total yards during the fourth quarter.

The 48-yard kick by Jonathan Doerer, which sailed through the uprights with 17 seconds to go, ended up a game that started with such promise for the Hokies (3-2).

Virginia Tech went into the night ranked second in the ACC in scoring defense and fourth in total defense.

The defense set the tone early as Tech built a 10-0 lead early in the second quarter. The crowd was loud and lively and everything felt right in Hokie Land, everything felt as it did the night of the opener, when the home team rode its defense to a 17-10 win over North Carolina.

Defensive end Amare Barno recorded his first sack since the opener when he dropped Coan for an 8-yard loss on third down to force Notre Dame to punt on its first drive. Tech gave up just 27 yards to the Irish in the first quarter.

Cornerback Jermaine Waller had the team’s first interception return for a touchdown since Caleb Farley’s pick-6 against Georgia Tech in 2018. Waller’s 26-yard runback with 50 seconds left in the third quarter put the Hokies up 22-21.

But, as is so often the case, it was the plays they didn’t make that loomed the largest when the game ended — Armani Chatman’s dropped interception, the missed tackles on Williams’ scoring run, and there was the 2-point conversion.

A broken play, Coan scrambled to his right, chased by defensive tackles Norell Pollard and Mario Kendricks. Coan appeared to be lofting a prayer of a throw toward the back of the end zone, where 6-foot-6 tight end Georga Takacs was stationed near the back line.

Then, Austin streaked in front of him, a step ahead of Peoples, and made a leaping catch to tie the game.

Doerer’s kick ended things 2:09 later. Still, Garbutt said the defense remains confident as the team prepares to jump back into ACC play and pursue a division title, a road that starts next weekend when it hosts Pittsburgh and star quarterback Kenny Pickett in a game Hollifield will have to sit out the first half following his ejection Saturday night.

“We feel like, as long as we play together, and do what we’re supposed to do, everybody doing their job, we feel like we can be one of the top defenses,” Garbutt said.

When last seen in Virginia, the Sun Belt Conference was a tidy, eight-team basketball league that included VCU and Old Dominion. Thirty years …

CHARLOTTESVILLE – Brennan Armstrong is back to being a complete quarterback, and Virginia’s offense looks completely dominant.

Notre Dame’s Kevin Austin Jr. celebrated catching a 2-point conversion pass to tie the game at 29-29 late in the fourth quarter of the Fighting Irish’s road win over Virginia Tech on Saturday.