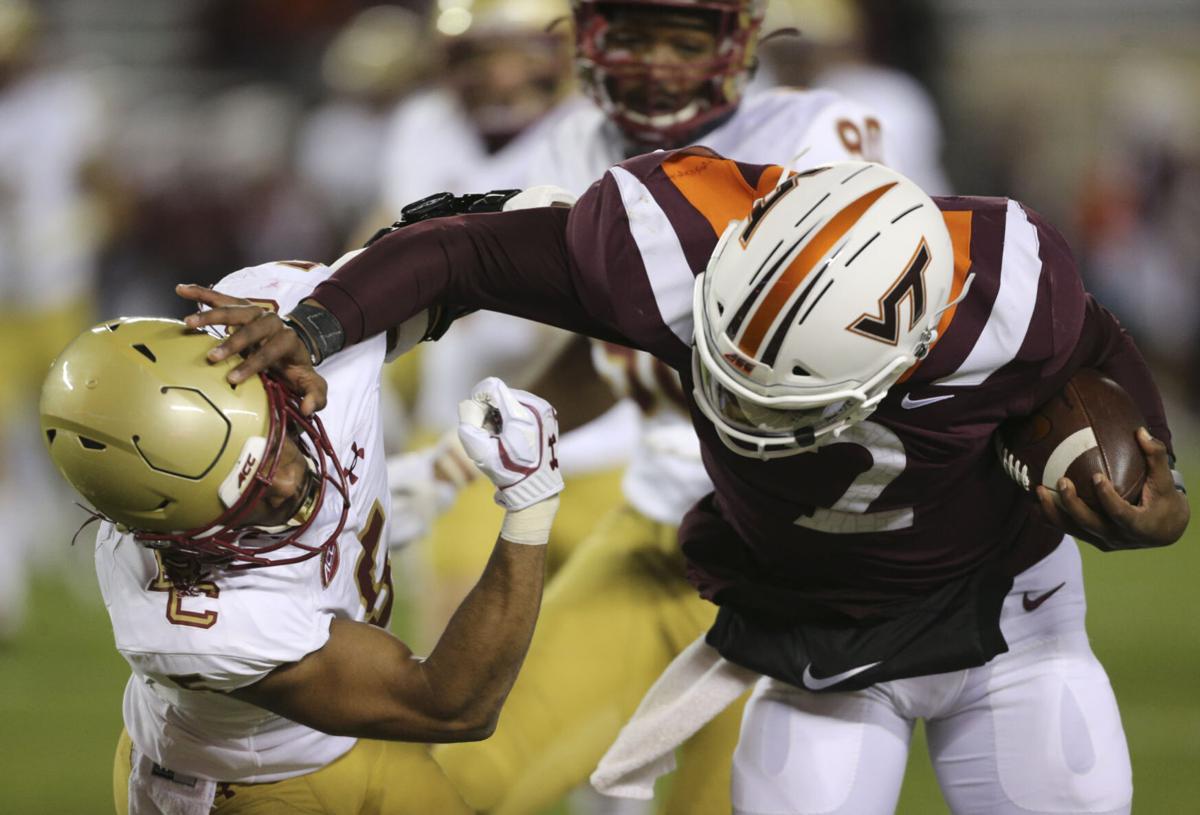 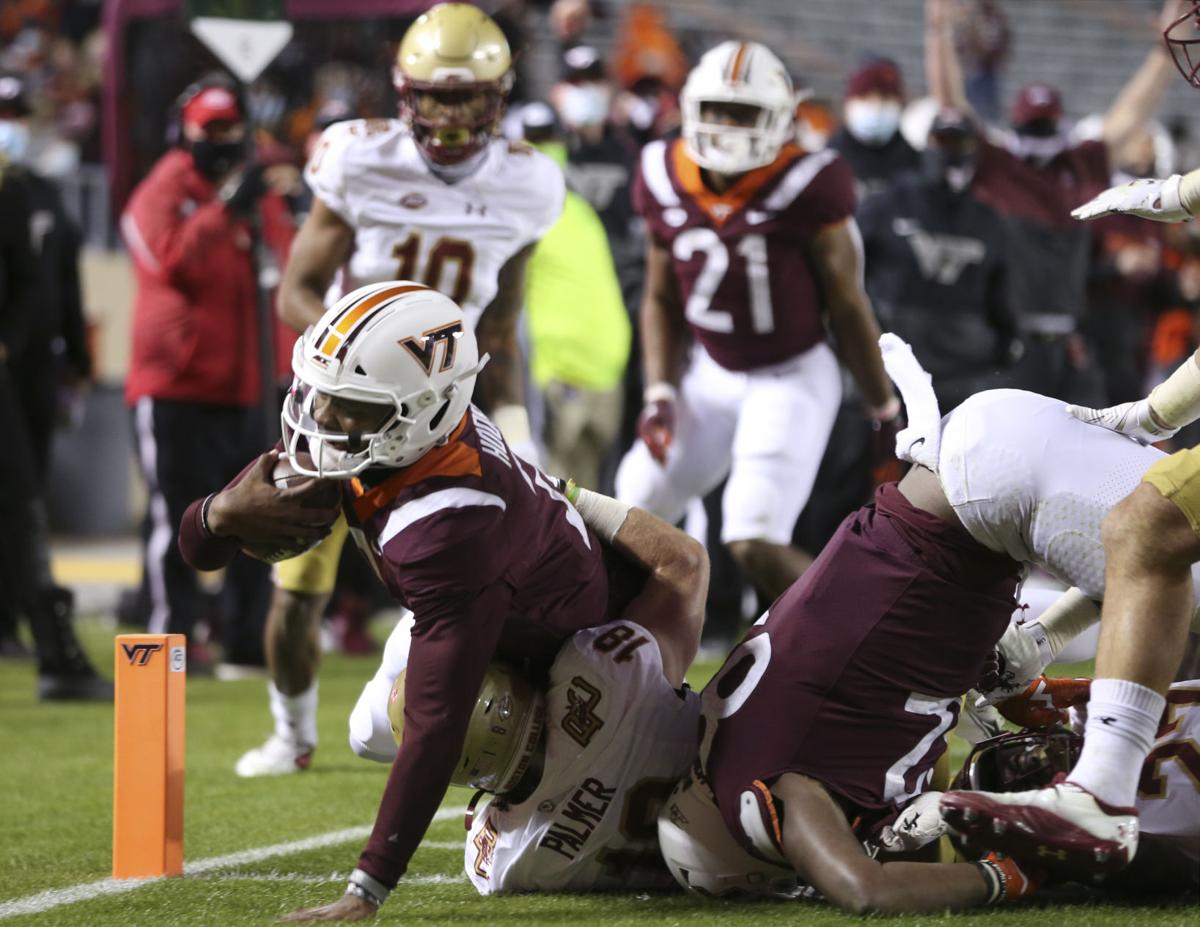 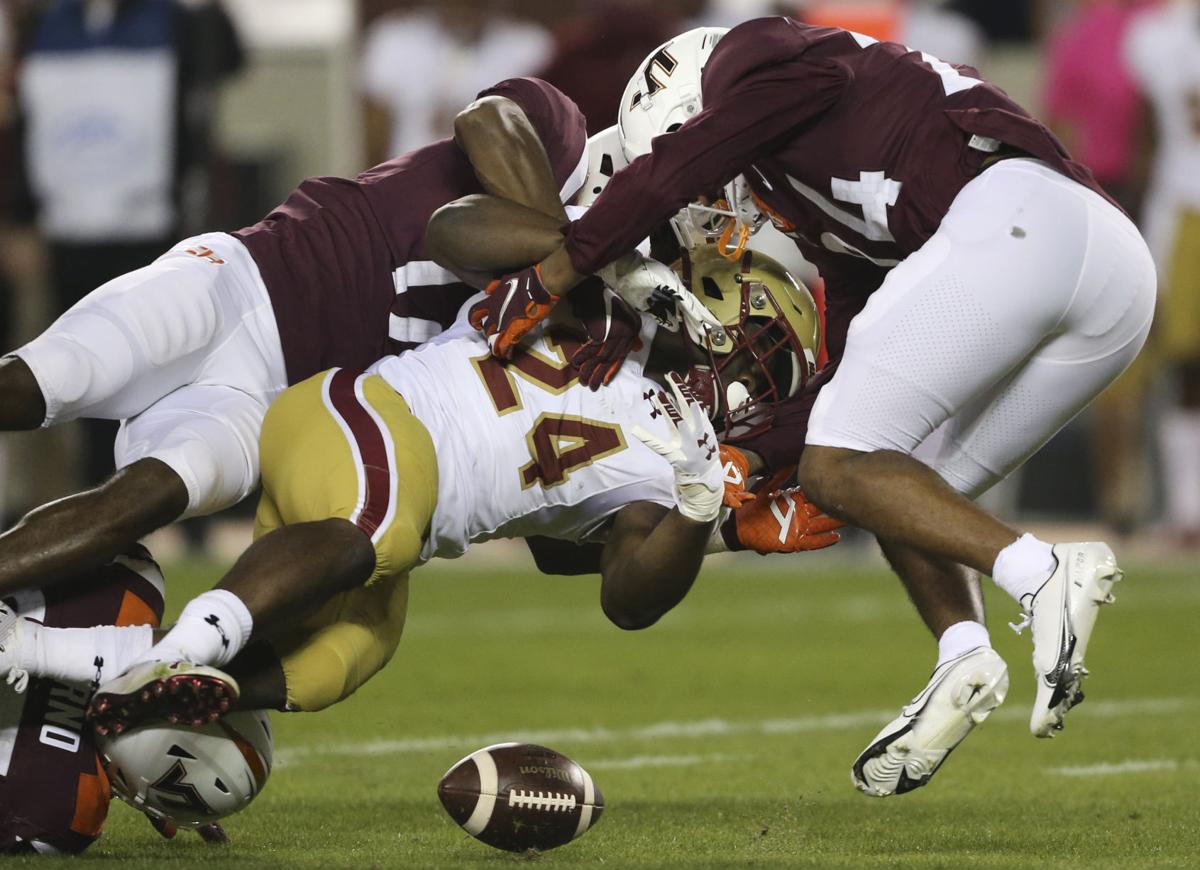 Boston College running back Pat Garwo III (24) fumbled the ball while being tackled by Virginia Tech defenders Divine Deablo (left) and Devin Taylor in the first half of the Hokies’ ACC victory on Saturday in Blacksburg.

In the six quarters that Hendon Hooker has steered the offense this season, Virginia Tech has scored 71 points, gained 766 yards on 94 snaps, aver- aged 8.15 yards per play and committed nary a turnover.

The Hokies can’t sustain this flirtation with perfection, but their approach for the remainder of the season became abundantly clear in Saturday’s 40-14 trampling of Boston College at Lane Stadium: Run relentlessly, throw efficiently and cobble defensively.

These Hokies don’t merely exhaust opponents with 5-yard gain after 5-yard gain. They stun defenses with chunk plays that flip the field and heist momentum.

“We have such a special offense,” Hooker said. “You never know when that one play is just going to break open for a huge gain or a touchdown.”

That knack is rooted in running back Khalil Herbert and Hooker.

A graduate transfer from Kansas, Herbert entered Saturday as the nation’s leading rusher, and he added 143 yards against BC. Herbert has surpassed 100 yards in each of Tech’s first four games, the program’s longest such streak since David Wilson’s seven straight in 2011.

The incumbent quarterback who missed 2020’s first two games after a medical scare, Hooker took over for Braxton Burmeister at halftime of last week’s 56-45 setback at North Carolina. The offense immediately shifted into overdrive.

Hooker ran for 164 yards and three touchdowns Saturday and completed 11 of 15 passes for 111 yards and another score. The last Tech quarterback to rush for more yards was Michael Vick — 210 at Boston College in 2000.

“I’ve been impressed with him, you bet,” coach Justin Fuente said of Hooker. “There’s still some things we need to clean up, that we can do better. … Obviously as things go on, we’ll have to be more … productive throwing the ball.”

Tre Turner, the team’s most accomplished receiver, missed much of Saturday’s game after an undisclosed first-half injury, placing a greater burden on Herbert and Hooker — the first pair of Hokies to rush for 100-plus yards in a game since Darren Evans and Tyrod Taylor in 2010.

In concert with an offensive line anchored by center Brock Hoffman and tackle Christian Darrisaw, they crushed the challenge.

And they’re doing it with style. Case in point how the Hokies countered BC’s two touchdowns.

Tech trailed 7-3 early in the second quarter and was fortunate it wasn’t 21-3. Quarterback Phil Jurkovec and the Eagles were driving at will, their first two series doomed by sloppy fumbles that Amare Barno and Alan Tisdale recovered for the Hokies.

After Keshawn King’s 29-yard return of an odd pooch kickoff gave Tech possession at BC’s 49, Hooker sold a play fake to Herbert and scooted 31 yards. Three plays later, he raced around right end on a designed quarterback sweep for 7 yards and the go-ahead touchdown.

Tech responded similarly after Boston College (3-2, 2-2) drew to 17-14 in the third quarter. On the second play of the ensuing possession, Herbert, as is his wont, patiently waited for a gap to emerge and raced 57 yards down the left sideline.

“Momentum is a very real thing,” Fuente said, “and recapturing it sometimes can be difficult. … Having the mental discipline to strain and focus in and try to respond to that, to regain that momentum, is an important part of football.”

And lest folks sleep on Rutgers transfer Raheem Blackshear, he scored Tech’s penultimate touchdown on a 28-yard run that ended any doubt.

While there’s no doubt about the offense, Tech’s defense remains a weekly riddle, in large measure due to COVID-19 and injuries. Saturday, the Hokies switched Divine Deablo from free safety to rover, and cornerback Devin Taylor to free safety, and while Jurkovec threw for 345 yards and two scores, the Eagles committed five turnovers, with Taylor and cornerback Brion Murray intercepting Jurkovec.

If the defense approaches full strength, and the offense continues its path, Tech will be formidable.

“I’m definitely pleased with how we’re running and blocking on offense,” Hoffman said. “Definitely getting close to 300 yards rushing the ball … every game is pretty good.”

Boston College running back Pat Garwo III (24) fumbled the ball while being tackled by Virginia Tech defenders Divine Deablo (left) and Devin Taylor in the first half of the Hokies’ ACC victory on Saturday in Blacksburg.