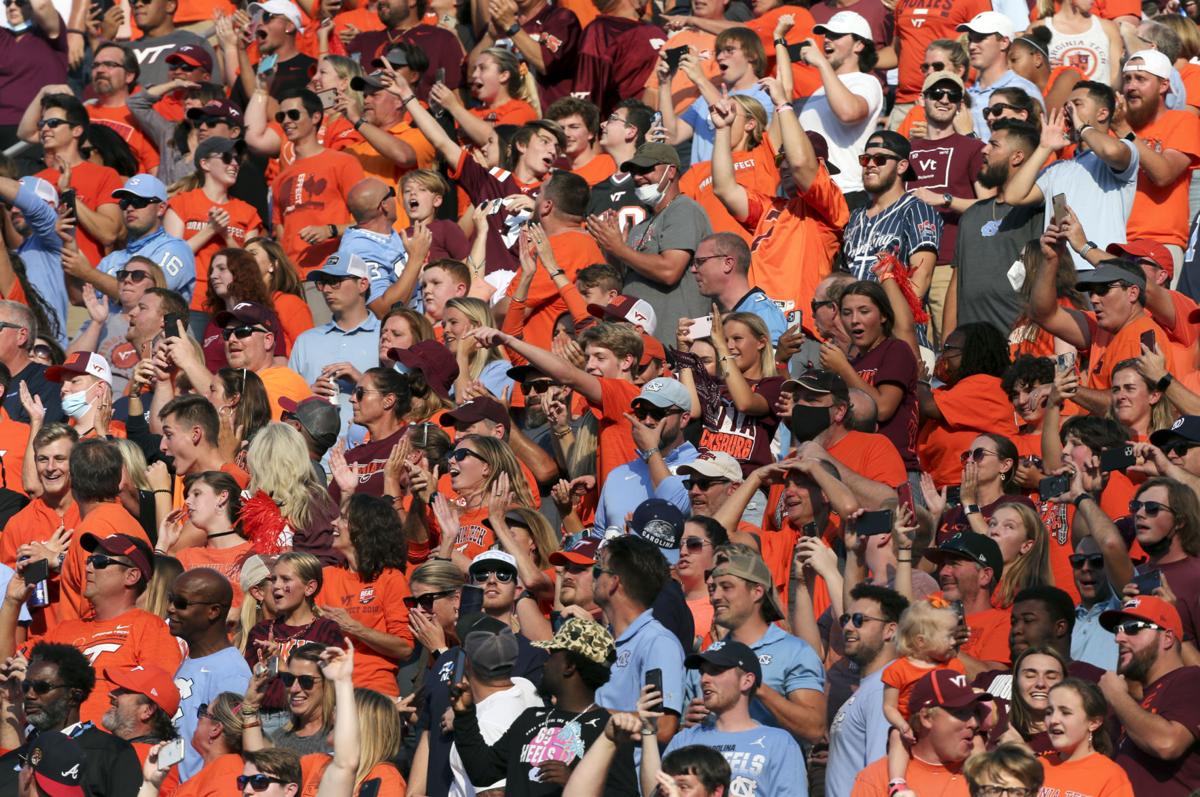 Football fans watch the start of Virginia Tech’s win over North Carolina last Friday night. Fans had to deal with long lines to enter the stadium, as well as long lines at concession stands. 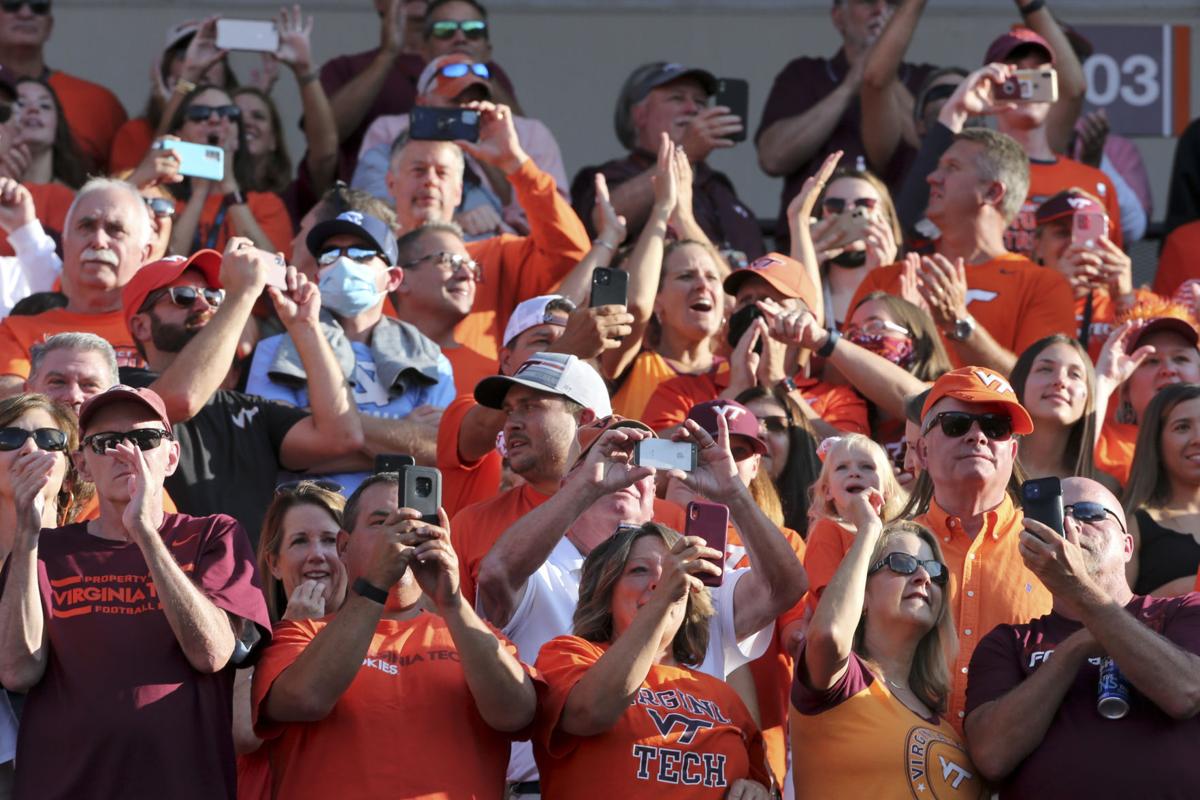 Football fans in the south end-zone stands of Lane Stadium watch the start of Virginia Tech's win over North Carolina last Friday night. Fans had to deal with long lines to enter the stadium, as well as long lines at concession stands.

By MARK BERMAN The Roanoke Times

Virginia Tech football fans were excited about what happened on the field in last week’s season opener.

They were less pleased with what happened elsewhere at Lane Stadium.

Some fans endured long lines to get into the stadium before last Friday night’s win over North Carolina.

“It was a little harrowing at the beginning,” Chuck Boyer of Leesburg said this week in a phone interview. “Leading into the game was unsafe.

“Trying to get through the ticket gate, there was a large amount of people.”

Once fans finally got to their seats, some found Tech students sitting in sections that were reserved for the general public. Fans also had to deal with long lines at the concession stands. Bottle-throwing spectators also were an issue at the opener.

But Virginia Tech did apologize to fans in written statements Tuesday afternoon and Wednesday night.

With Saturday’s home game against Middle Tennessee State looming, Virginia Tech’s statement Wednesday also presented the athletic department’s solutions to some of last week’s woes, including: adding beverage-only concession stands; reducing the number of menu items; spelling out to Tech students where they must sit; and imploring fans to download their tickets to their phones before they get to the stadium.

The season opener, which drew a sellout crowd, marked the first time since the 2019 season that most Hokies fans could attend a Tech game at the stadium. And with the opener being a nationally televised game against then-10th ranked North Carolina, the game was sure to draw a packed house.

But this is the first school year that Tech fans can no longer enter games with paper tickets; they must use mobile tickets.

Joel Gillespie of Waynesboro said it took him 45 minutes to get into the stadium.

“All they had was a stand that had a scanner on it and you would put your phone underneath it, … so that slowed things up a lot,” he said.

With Lane Stadium lacking a great wireless signal, some fans trying to enter the stadium found it hard to access their tickets on their phones.

Virginia Tech wants fans to add their tickets to Apple Wallet or Google Pay before they get to the stadium. Once they do that, the internet will not be needed to access their mobile tickets at Lane. But if fans keep their tickets in the Hokiesports app, they will need Wi-Fi or a cellular signal to get to their tickets.

Dallas Spencer of Richmond waited 30 to 40 minutes in line.

“There was not enough people scanning tickets,” he said.

Spencer bought his ticket outside the stadium — well, a photo of a ticket that was sent to his phone. But that was problematic.

“There was a lot of fake tickets sold outside the gate,” he said. “I saw one guy just sending … a screenshot of the same ticket to a bunch of different people.

“I got scammed. … Somebody had already come inside with the same ticket. … It didn’t go green and it didn’t make the click and the girl [at the gate] just said, ‘Whatever, go on in.’”

Some fans discovered Tech students sitting in seats reserved for the general public.

“We were in the east stands. There were some students there who were convinced that they were supposed to be there because I think their tickets said ‘General admission,’ so they took that to mean the whole stadium,” Gary Reinhardt of Midlothian said.

Boyer said when he and his family got to their seats, students were sitting there.

With Tech students not allowed at the games last fall, both current freshmen and current sophomores were attending a game at Lane for the first time last Friday.

In Wednesday’s statement, Tech specified to students that they have general admission seats only within certain areas (the north end zone; sections 1 and 3 above the portals; sections 21, 23 and 25; and part of section 27).

Tech also has switched this season to cashless purchases at the concession stands; fans must use credit cards, debit cards or gift cards.

The changes — and staffing issues — made for long lines at concession stands last week.

The lines were not the only issue.

For Saturday’s game, Tech will reduce some of the menu options and focus on basic items in hopes of cutting down the wait time.

Tech also will add 15 beverage-only concession stands so people who want only water, beer or soda can opt for one of those lines.

“[They were] coming directly over the top of my head,” he said.

Boyer, who was sitting halfway up the stands, said a member of his family was hit with an empty water bottle.

Gillespie, who was also sitting halfway up the stands, said he saw both water bottles and beer bottles being thrown.

“That’s a lot worse than I’ve seen it before,” he said.

Football fans watch the start of Virginia Tech’s win over North Carolina last Friday night. Fans had to deal with long lines to enter the stadium, as well as long lines at concession stands.

Football fans in the south end-zone stands of Lane Stadium watch the start of Virginia Tech's win over North Carolina last Friday night. Fans had to deal with long lines to enter the stadium, as well as long lines at concession stands.