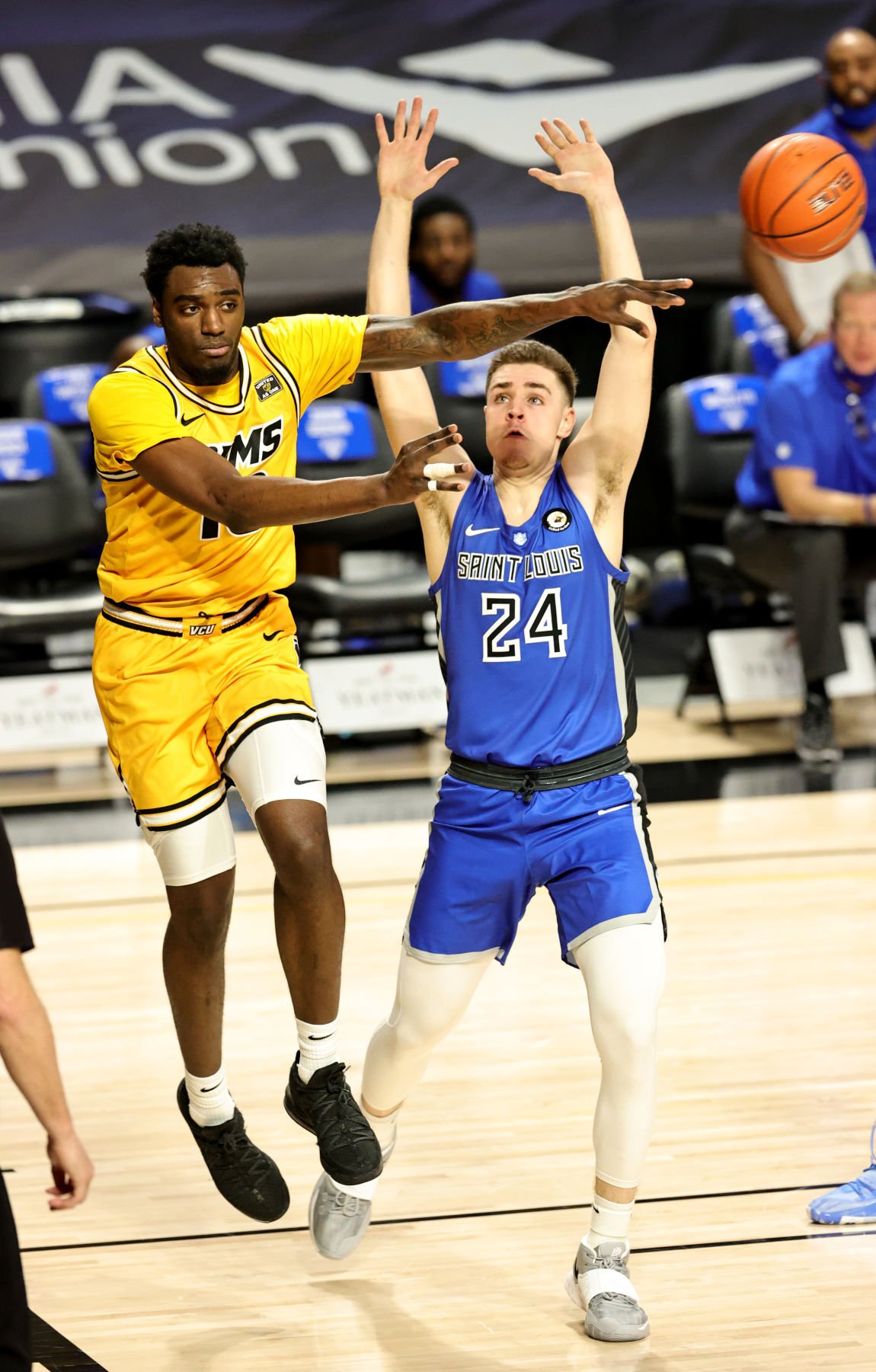 VCU’s Vince Williams Jr. passes the ball against Saint Louis’ Gibson Jimerson (St. Christopher’s) in the first half of the Rams’ win. Williams led the Rams with 16 points. 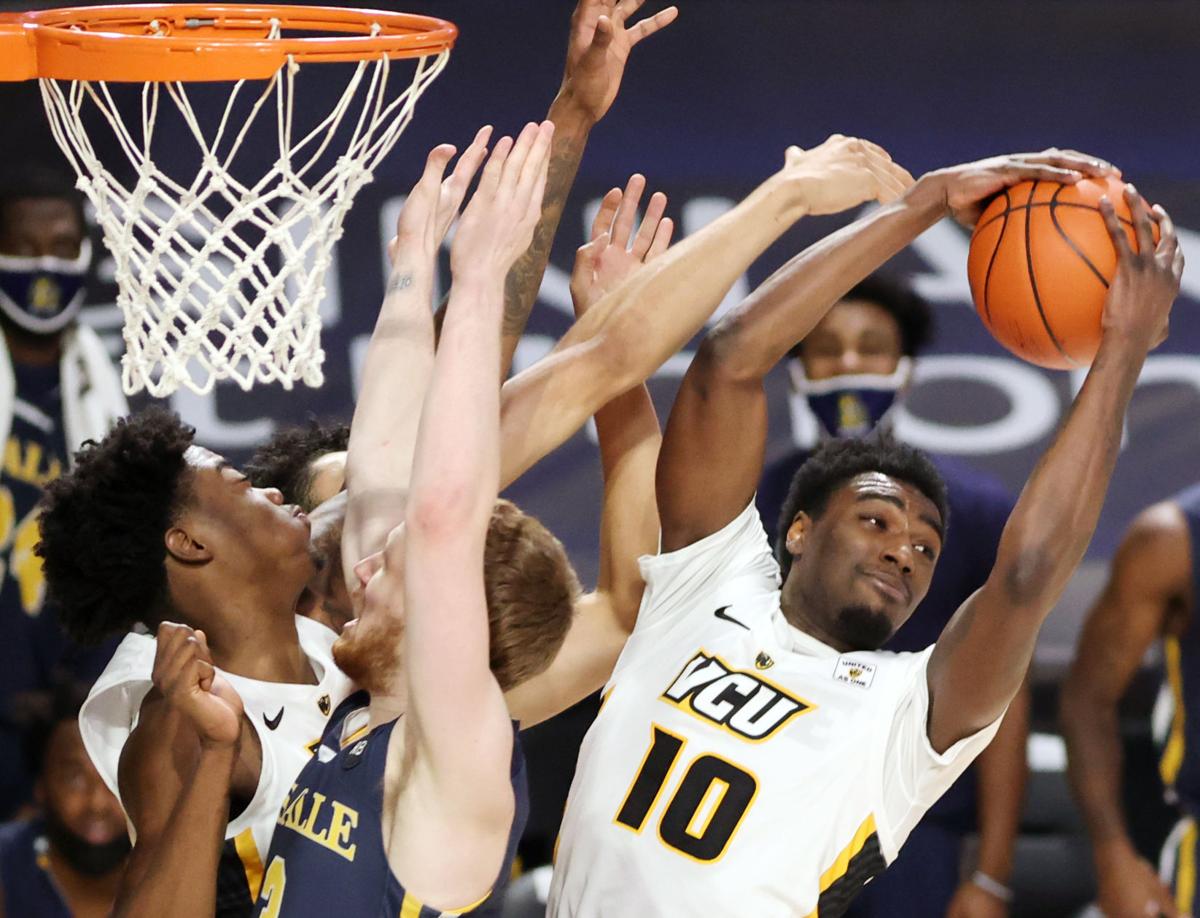 Ed Heintschel can remember a game during Vince Williams’ high school days at St. John’s Jesuit when Williams kept getting beat up. But without the foul calls to match.

“And the official came over and actually said to me, ‘Hey, he’s a big kid Coach, he can handle it,’” Heintschel said. “And I said, ‘That’s not the point.’”

Another time, Williams’ junior year, he was mugged throughout the game in SJJ’s first matchup against rival St. Francis de Sales. He struggled, and was frustrated. Heintschel didn’t say anything to him afterward because he knew Williams was upset.

But in the rematch later in the season, Williams responded with his play. He had 11 points in the first quarter and 30 total in a win.

“He had a different role from what he has at VCU,” said Heintschel, who retired in 2019 after 40 years and 725 victories at SJJ. “But he’s a tough kid — and mentally, and physically.”

Williams’ toughness was cultivated back in high school in Toledo, Ohio — whether it was playing through contact because he was bigger than other players then, or whether it was the mental fortitude to come back with a big performance after taking a beating the first time around against St. Francis de Sales.

The toughness has come out in slightly different ways at the collegiate level, but it’s a quality Williams has shown since his freshman year.

The junior wing isn’t shy about getting on the floor for a positive play, and taking charges has become somewhat of a signature for him at VCU. And he’s also fought through numerous injuries and subsequent rehab processes, since his senior year of high school.

Rams coach Mike Rhoades said that the way he was raised in the game of basketball is to see a player giving up his body for his team as the ultimate team sacrifice. And Williams, Rhoades said, does that at a high level.

“He takes charges, he throws his body around,” Rhoades said. “Especially in there sometimes being an undersized big man. He did that stuff in high school.”

Williams’ willingness to do that led up to one of the most memorable plays of VCU’s A-10 tournament to this point. In the quarterfinals against Dayton Friday, the 6-6, 220-pounder heeded a directive from the sideline to take a charge against the Flyers’ 6-11, 278-pound center Jordy Tshimanga early in the second half.

Williams made the play successfully, but the hit knocked him out of the game with back spasms. He returned to start the next day against Davidson in the semifinals, though, and helped the Rams (19-6) to Sunday’s final against St. Bonaventure (15-4).

Though he endured physicality while playing high school ball at his size in what Heintschel described as a guard-oriented area, Williams said Wednesday that he didn’t start taking charges in particular until he got to VCU.

That’s when he began encountering players bigger than him, and it became a useful tactic.

“Just going out there, playing hard,” he said.

Williams said Wednesday that he’s felt all right in recent practices coming off the shot he took Friday. He also, the previous week, suffered a sprained left ankle that kept him out of about the final 10 minutes of the Rams’ regular-season finale at Davidson.

Williams has enjoyed the best season of his career to this point. He’s averaging career highs of 10.6 points and 5.1 rebounds, and shooting a career-high, and team-high, 41.8% from deep. That’s an increase of 6.4 per game, 2.3 per game and 21.8% in the respective categories. He’s VCU’s second-leading scorer and second-leading rebounder.

As a junior at SJJ, Heintschel told Williams to play like a Draymond Green, of the Golden State Warriors — like a point forward. And that versatile style has carried over to VCU.

“Get the ball and go,’” Heintschel said, recalling his message to Williams then. “Because in the open court he is deadly and he’s a great passer. He’s unselfish. And that kind of just elevated his career, which was already on a pretty good arc there. But he can do everything. I mean, he is an on-the-ball defender, off-the-ball defender. He’s got great anticipation.”

And he also doesn’t mind playing physically, like he showed in the play against Tshimanga and numerous other times in his career.

On Wednesday, Williams was asked to give his definition of a true champion. He said simply, “a warrior.”

And that also seems an apt description of Williams’ playing style.

“If the right play is to take a charge on Jordy from Dayton, to help his team win, [Williams is] going to do it. And we all saw that,” Rhoades said. “And that’s a warrior, it really is. And we talk about that all the time, if you can give up your body for the good of the team, you’re going to get closer to victory.”

Note: The status of junior guard KeShawn Curry for Sunday’s game is to be determined. Curry returned home to Florida after the passing of his brother on Feb. 20, and has not played in VCU’s last four games.

Curry is back in Richmond now, but is in quarantine and has to clear COVID-19 protocol.

Will Aaron Rodgers be the starting QB for the Packers week 1?

Could there be a hole in one at the US open?

Could there be a hole in one at the US open?

VCU’s Vince Williams Jr. passes the ball against Saint Louis’ Gibson Jimerson (St. Christopher’s) in the first half of the Rams’ win. Williams led the Rams with 16 points.