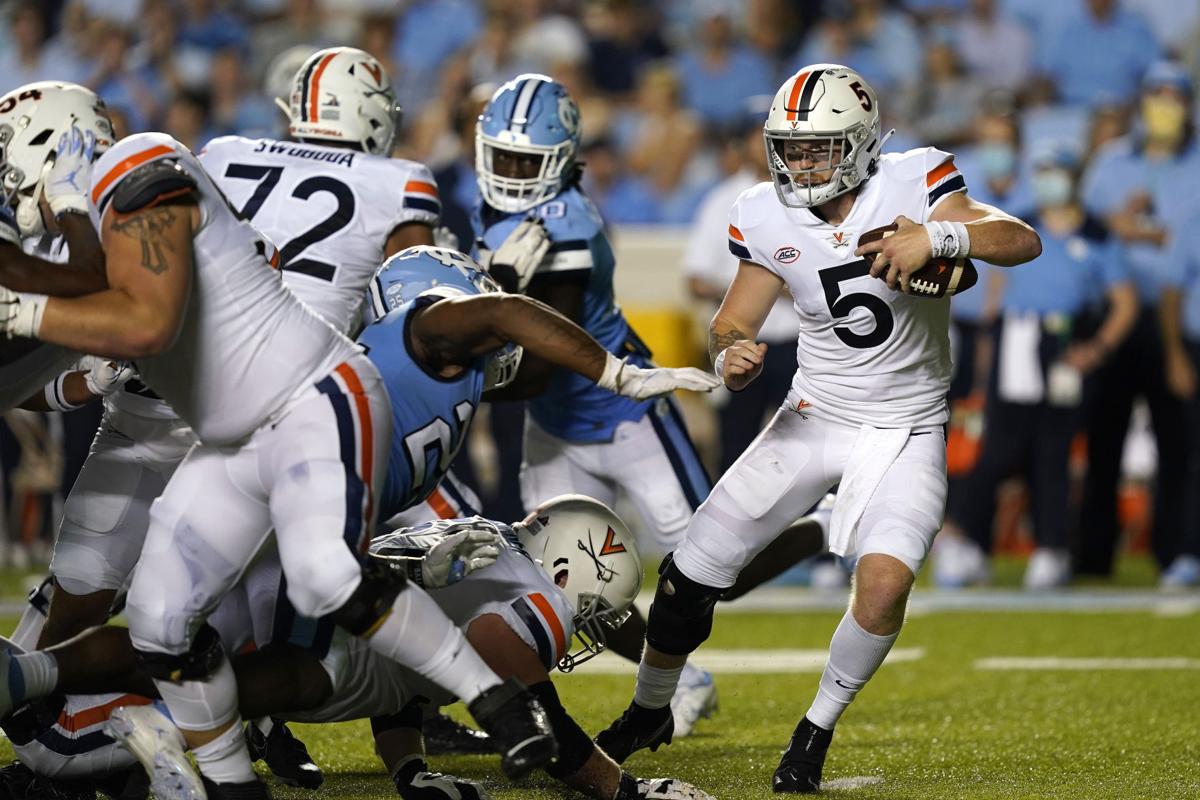 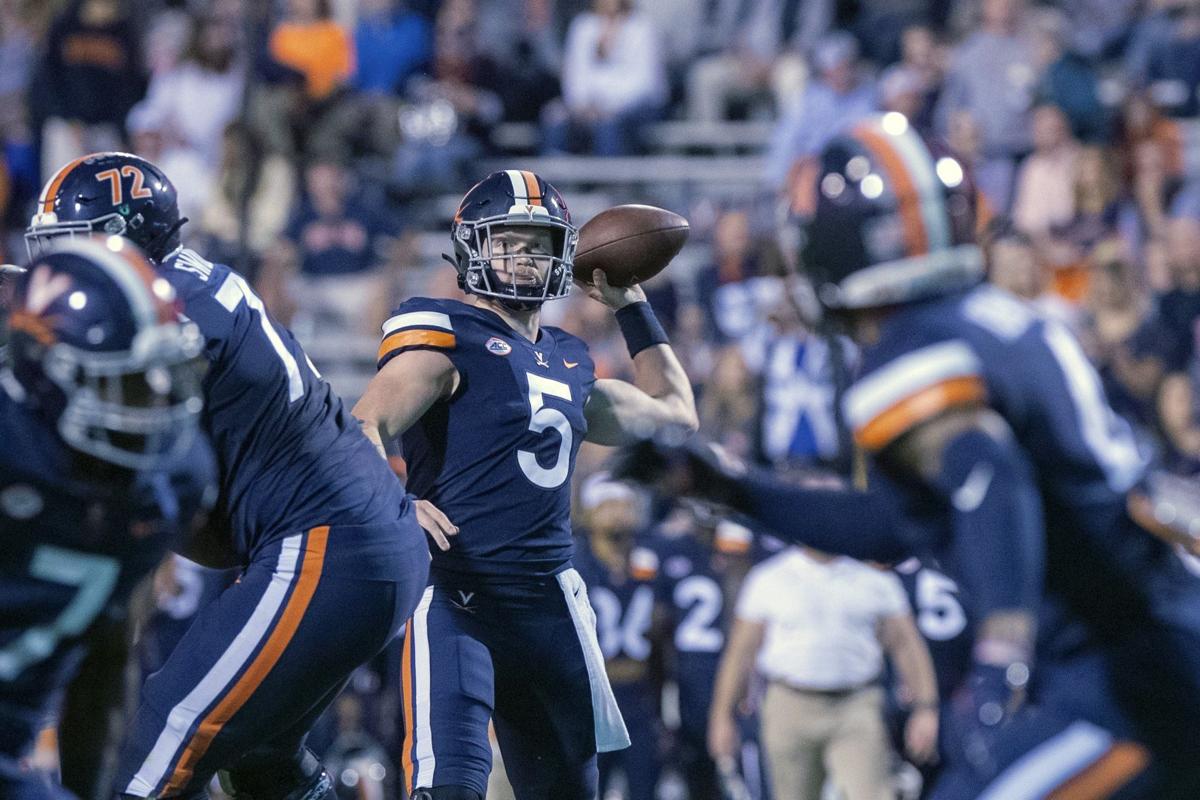 Virginia quarterback Brennan Armstrong leads the ACC and ranks second in the nation with 1,705 passing yards. The Cavaliers have the nation’s top-ranked passing offense with 430.5 yards per game. 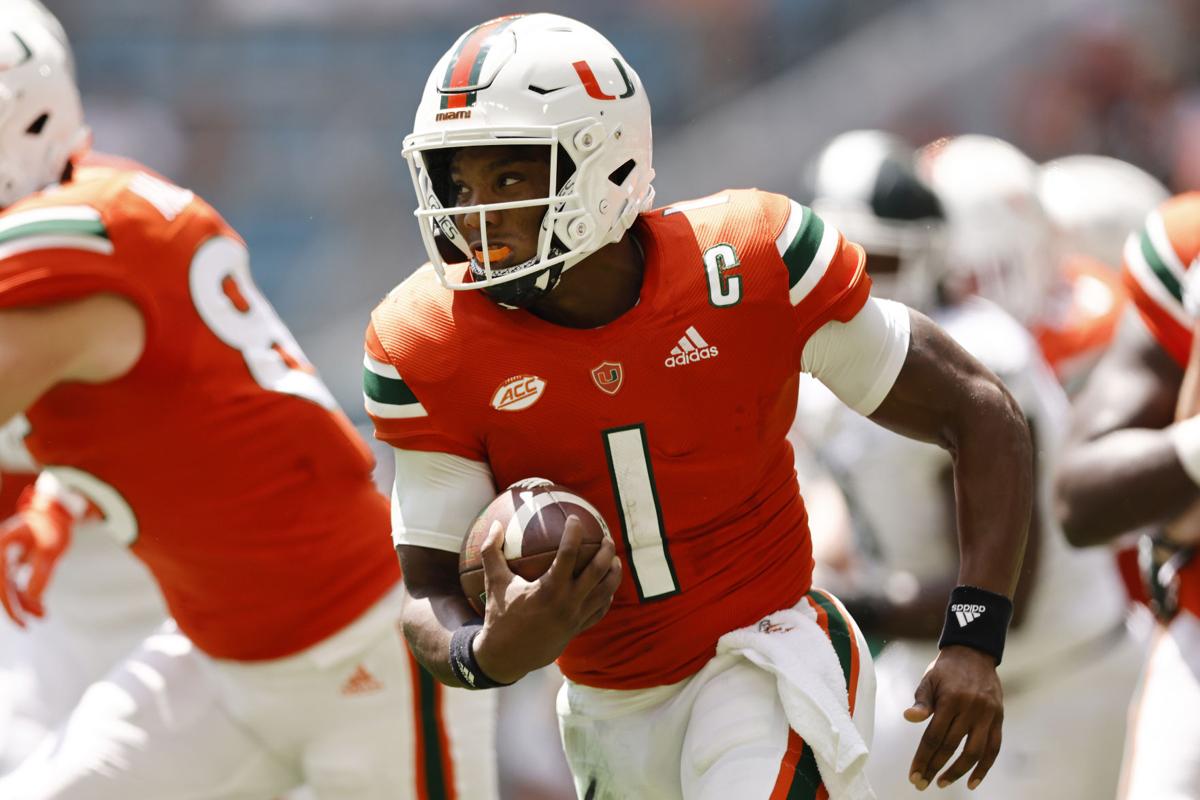 The status of Miami quarterback D’Eriq King is unclear for Thursday night’s game against Virginia. King missed the team’s last game with a shoulder injury. 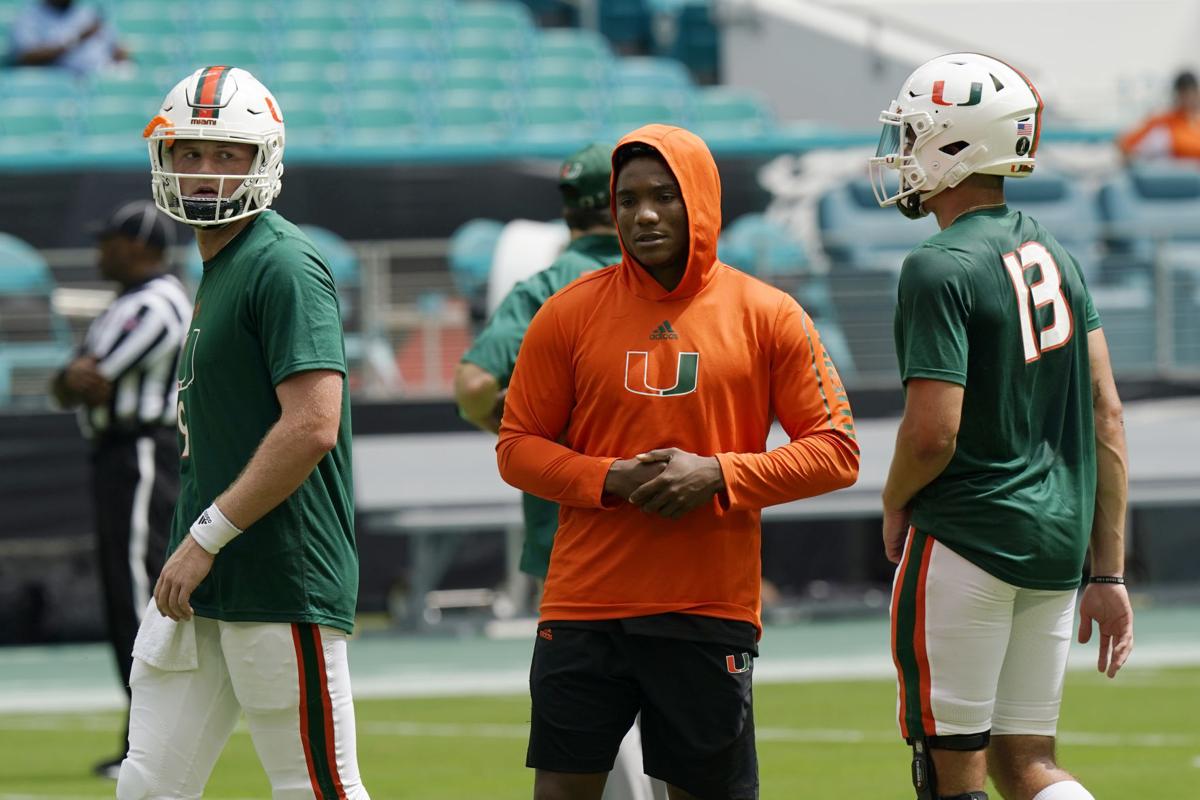 CHARLOTTESVILLE — As he began to study Virginia’s offense in preparation for Thursday night’s game, Miami football coach Manny Diaz said he was struck by Brennan Armstrong’s accurate throws. At one point, Diaz noticed a wide receiver’s head snapping back as Armstrong put a pass right on him as he came out of a curl route.

“He’s hitting people in the face mask,” Diaz said Monday. “His accuracy jumps off the film.”

Diaz and Miami defensive analyst Bob Shoop, the former William & Mary defensive coordinator, spoke glowingly about Armstrong and the UVA passing attack of this week’s matchup. Armstrong leads the ACC and ranks second in the nation with 1,705 passing yards this season.

The Cavaliers have the nation’s top passing offense, putting up 430.5 yards per game through the air.

With Armstrong at the helm, Virginia has also added big-play potential. The Cavaliers have had 31 pass plays go for 20 yards or more, the most in the nation.

“Virginia’s always had a very well-coached offense,” Diaz said. “What makes them different this year is they’re explosive in addition to efficient. They are getting chunk plays.”

Virginia (2-2, 0-2 ACC), which has lost two straight, has beaten Miami just once in the past six meetings between the schools and hasn’t won in South Florida since 2011, a string of five road losses to the Hurricanes, who haven’t played a league game this season.

The past three contests have been defensive struggles — neither team has hit 20 points in any of those games.

In fact, the series has become so points-starved that last season’s 19-14 Miami victory was the highest scoring in the past three years.

But will it be?

In addition to its offensive success, UVA’s defense goes into Thursday’s night’s game reeling after giving up 96 combined points in losses to North Carolina and Wake Forest. The schematic change to play more five-defensive back sets has resulted in the Cavaliers getting less pressure on quarterbacks while still being picked apart by the pass.

Friday night, Wake Forest scored its first touchdown on a 39-yard pass, then controlled the ball with short and intermediate passes, while racking up 203 rushing yards.

“They’re typically a really physical, really stingy bunch,” Miami offensive coordinator Rhett Lashlee said. “They really got the better of us last year. We were able to move the ball, but man, we didn’t score any points. I felt they kind of took it to us.”

Diaz said many of Virginia’s defensive issues can be attributed to the quality of opponents.

“When you’re playing North Carolina and Wake Forest back to back, those are two outstanding offenses,” he said. “The respect that we have for Virginia from playing them every year, a lot of guys that were in that game a year ago, and then the coaching staff there, we know this will be a great challenge for our offense.”

It remains unclear who will quarterback that offense on Thursday night. Starter D’Eriq King missed the team’s last game — a 69-0 shellacking of Central Connecticut State — with a shoulder injury. Freshmen Tyler Van Dyke and Jake Garcia played in his place, and, Diaz and Lashlee said, played well enough to warrant time Thursday if King can’t go for the Hurricanes (2-2, 0-0).

“We’re trying to see D’Eriq’s availability,” Diaz said. “He’s improving and feeling better every day and was able to move around a little bit today, so we’ll see where he’s at.”

The Hurricanes’ defense struggled with tackling and generating a pass rush in those games. While most of the ACC has cannibalized itself during the first four weeks of the season, Miami is among five league schools that haven’t played a conference game.

They can join Virginia Tech atop the Coastal Division standings with a win over UVA, while the Cavaliers’ hopes for a division title would essentially be finished if they open 0-3.

“After coming out with two big losses, I wouldn’t say it’s more pressure, but the focus and urgency is definitely there,” Virginia wide receiver Keytaon Thompson said.

Note: Coastal Carolina announced a three-game football series with Virginia, with the Chanticleers visiting Charlottesville on Nov. 19 next season and Aug. 30, 2025, and the Cavaliers returning the trip to Conway, S.C. on Sept. 21, 2024.

Virginia quarterback Brennan Armstrong leads the ACC and ranks second in the nation with 1,705 passing yards. The Cavaliers have the nation’s top-ranked passing offense with 430.5 yards per game.

The status of Miami quarterback D’Eriq King is unclear for Thursday night’s game against Virginia. King missed the team’s last game with a shoulder injury.