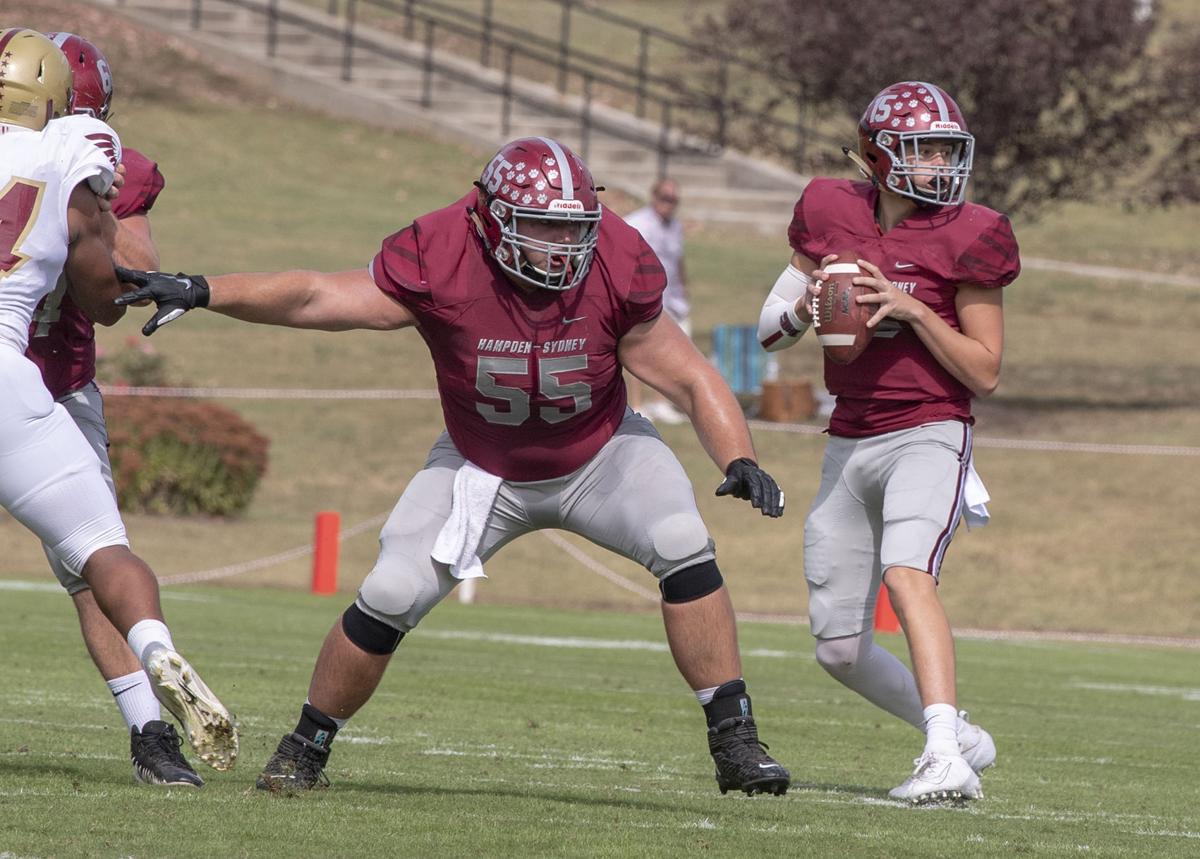 Tyler Howerton (55) is majoring in physics and minoring in mathematics at Hampden-Sydney. 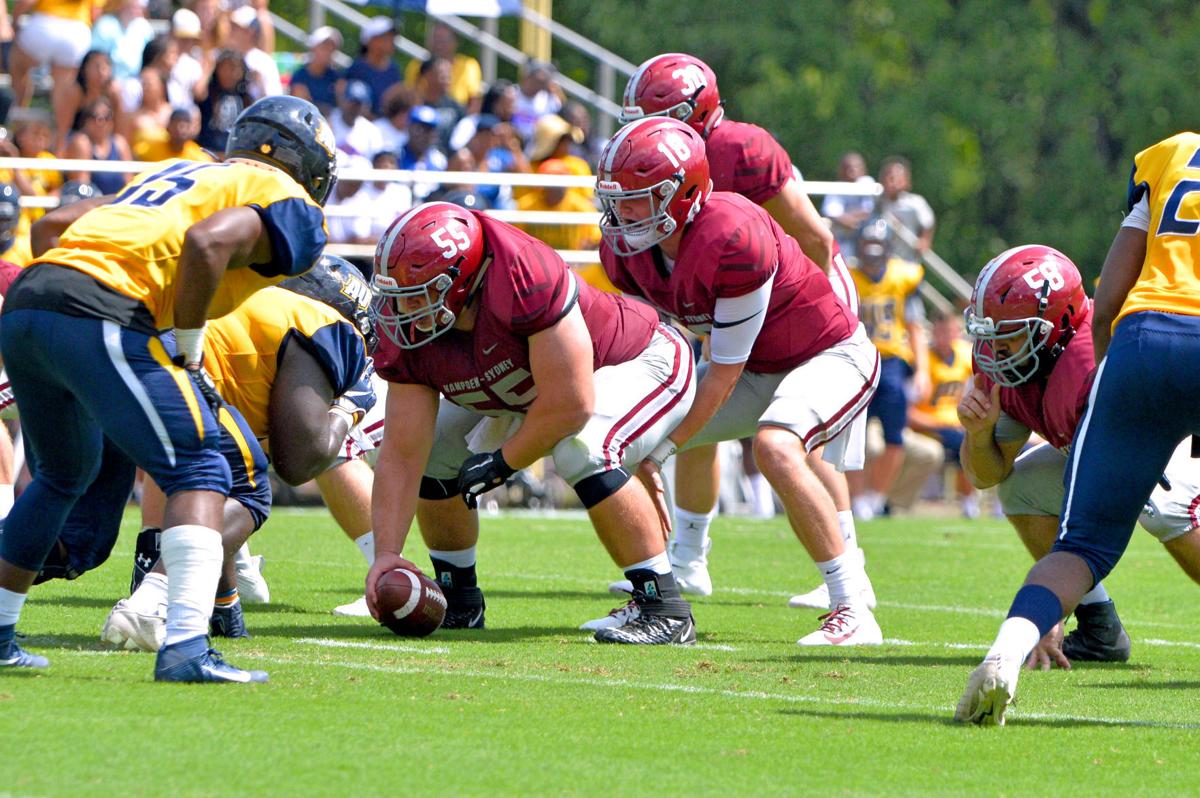 During the past three years, he’s come to recognize a common sight when passing the building: Tyler Howerton, a senior Tigers offensive lineman. Favret can’t tell how many times he’s seen Howerton coming in and out of the library, toting his backpack.

When Favret arrives home, Hampden-Sydney professors are among his neighbors. And it’s clear to him how much Howerton’s influence extends on the roughly 1,000-student, all-male campus located about 90 minutes southwest of Richmond.

“He’s essentially a legend here on our campus for not only his brilliance but just his passion academically,” Favret said of Howerton. “And there’s a lot of people really proud of him here that aren’t anything to do with the football program.”

Howerton, a native of Alexandria, has not only been a starter on Hampden-Sydney’s offensive line since he was a freshman, but he has also established himself as an academic ace.

Majoring in physics and minoring in mathematics, Howerton was a recipient of the Barry Goldwater Scholarship in the spring, a prestigious national award for students in the natural sciences, engineering and mathematics fields. He was the first-ever Hampden-Sydney physics major to win it.

He’s won Hampden-Sydney awards recognizing the sophomore, junior and senior at the school with the highest GPA. His GPA is 4.0.

Howerton has conducted intensive independent physics research projects each of the past two years, too.

His extensive football and academic résumés have put him in the running for the award nicknamed the “Academic Heisman.” Last Thursday, Howerton was named one of the 12 national finalists for the 31st William V. Campbell Trophy — the top scholar-athlete award in college football.

Howerton is the first Hampden-Sydney player to ever be a finalist, and the only finalist this year from a Division III school.

To figure out how Howerton has accomplished what he has, perhaps ride by the Bortz Library like Favret. You may catch Howerton there, too.

“I think the thing that stands out about Tyler for me is just his incredible work ethic,” Favret said. “And you see it on the football field. But you also see it, obviously, in his preparedness for classes and for projects that he works on off the field.”

As a finalist for the William V. Campbell Trophy, Howerton will get an $18,000 postgraduate scholarship. The winner of the award will be announced later this year and receive a $25,000 scholarship.

Coming out of Langley High School in McLean, Howerton first had his eye on chemistry, with a pre-med slant. But, once on campus at Hampden-Sydney, he found that he enjoyed physics more and shifted his focus to that.

“I enjoy learning how things work,” Howerton said. “Just things in the universe and why things happen the way they do. And I wanted to know more.”

On the football field, Favret found a player in Howerton who was physically ready to contribute right away. The 6-3 290-pounder has squatted a Hampden-Sydney football program-record 700 pounds and has bench-pressed 450 pounds, the second most in program history.

Howerton, who has started each of the Tigers’ 29 games the past three years, has spent the majority of his career at right guard but started four games at center last season as well. Due to the COVID-19 pandemic, the Old Dominion Athletic Conference hasn’t played this fall but intends to play in the spring semester, starting Feb. 26.

The Tigers have practiced and lifted this semester in preparation. Howerton has balanced that with a research project building a system for Mössbauer spectroscopy in zinc-67.

“My hope is that I’ll be able to look at zinc in the pancreas and, perhaps, find some kind of connection between that and diabetes,” Howerton said.

That followed a project last school year in which he used gamma-ray spectroscopy to examine what levels of radioactivity were on campus.

Howerton makes no bones about it that balancing football and his intensive coursework has been tough. Free time is scarce. There have been countless nights when he’s closed out the library to finish his work, at 1 a.m. — and countless more late nights in the lab.

But he also makes sure to mention that he “of course” has found it to be worth it. Senior right tackle Brad Gholson, a former standout at Patrick Henry in Ashland, is one of Howerton’s roommates. Though Howerton is hardly ever in his room.

“He probably, outside of football and outside of actually going to class, easily puts in six to 10 hours a day on his studies,” Gholson said.

Howerton still has squeezed in multiple extracurriculars, including volunteering at the Farmville Area Community Emergency Services Food Pantry and taking part in a Hampen-Sydney mentor program to work with a Prince Edward County Elementary School student.

He even began learning how to play the piano as part of a pair of classes as a sophomore and junior.

Howerton found out that he was a finalist for the Campbell Trophy before a Tigers practice, when Favret broke the news to the entire team. He said it was unexpected — he knew not many D-III players get to the final stage.

“I think it’s a testament to all that this school and the people here and the people in my life have given me. All the opportunities I’ve been provided,” Howerton said. “And all the people that have been there to support.”

After his senior season in the spring, Howerton will graduate in May. His goal is to earn a Ph.D. in nuclear physics. He’s eyeing schools like Duke, North Carolina, Notre Dame, Vanderbilt and UVA next.

With the doctoral degree in hand, he hopes to continue research in either industry or academia. But, before all of that, Howerton likely won’t be too hard to find. Just look toward Bortz Library.

Teel: Hokies hit their 2020 low in loss at Pitt

With his family behind him, former Hopewell star Ronnie Walker gets his shot at UVA

CHARLOTTESVILLE — There isn’t the same roar from the crowd these days at Scott Stadium. With attendance limited to just the families of player…

CHARLOTTESVILLE— Talented sophomore nose tackle Jowon Briggs has reached the coda of his Virginia football career, but not his swan song in th…

PITTSBURGH — Two years ago, Virginia Tech played at Pittsburgh and was beaten by 30 points. Recalling that bludgeoning this week, Hokies lineb…

Tyler Howerton (55) is majoring in physics and minoring in mathematics at Hampden-Sydney. 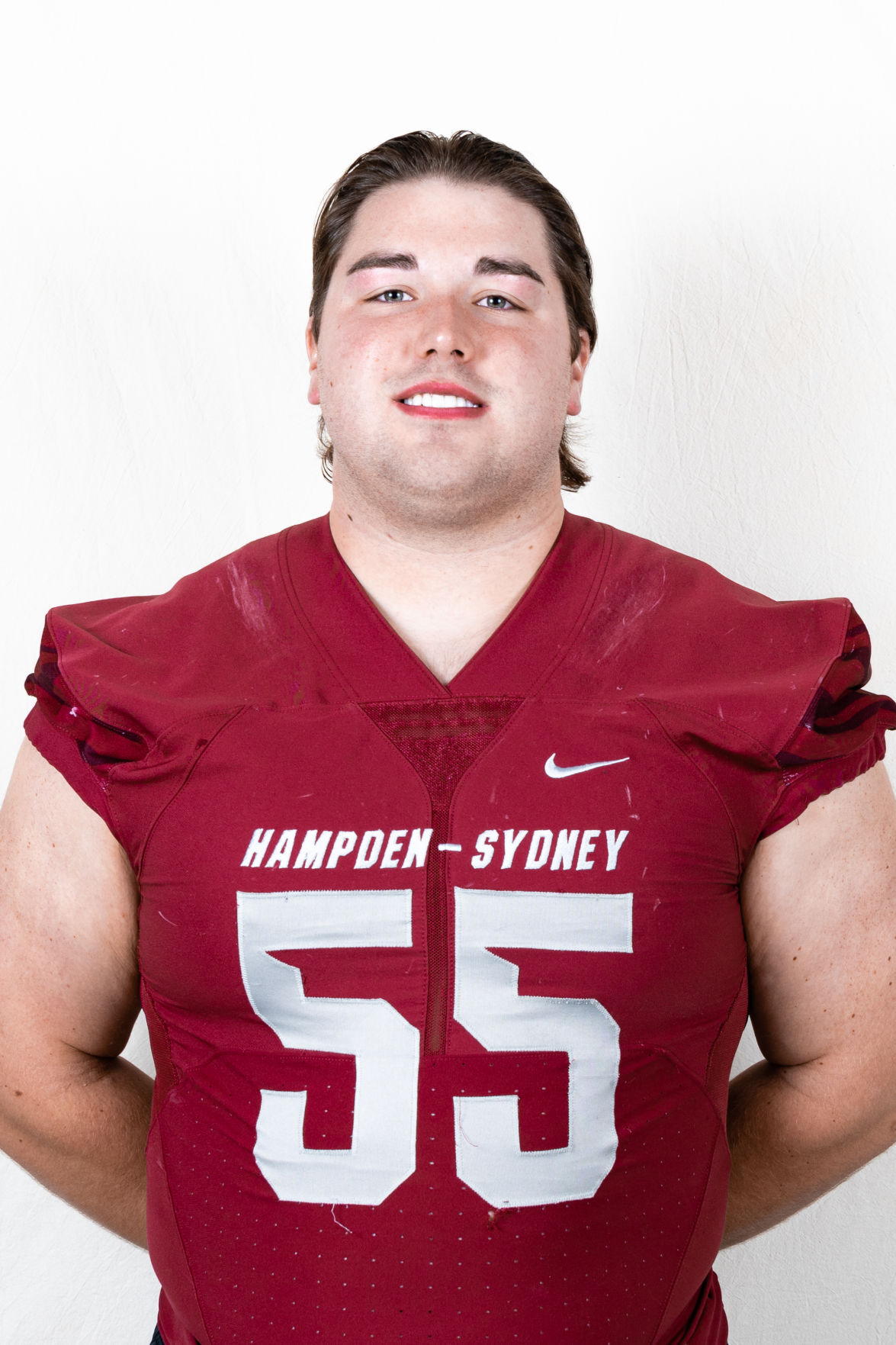