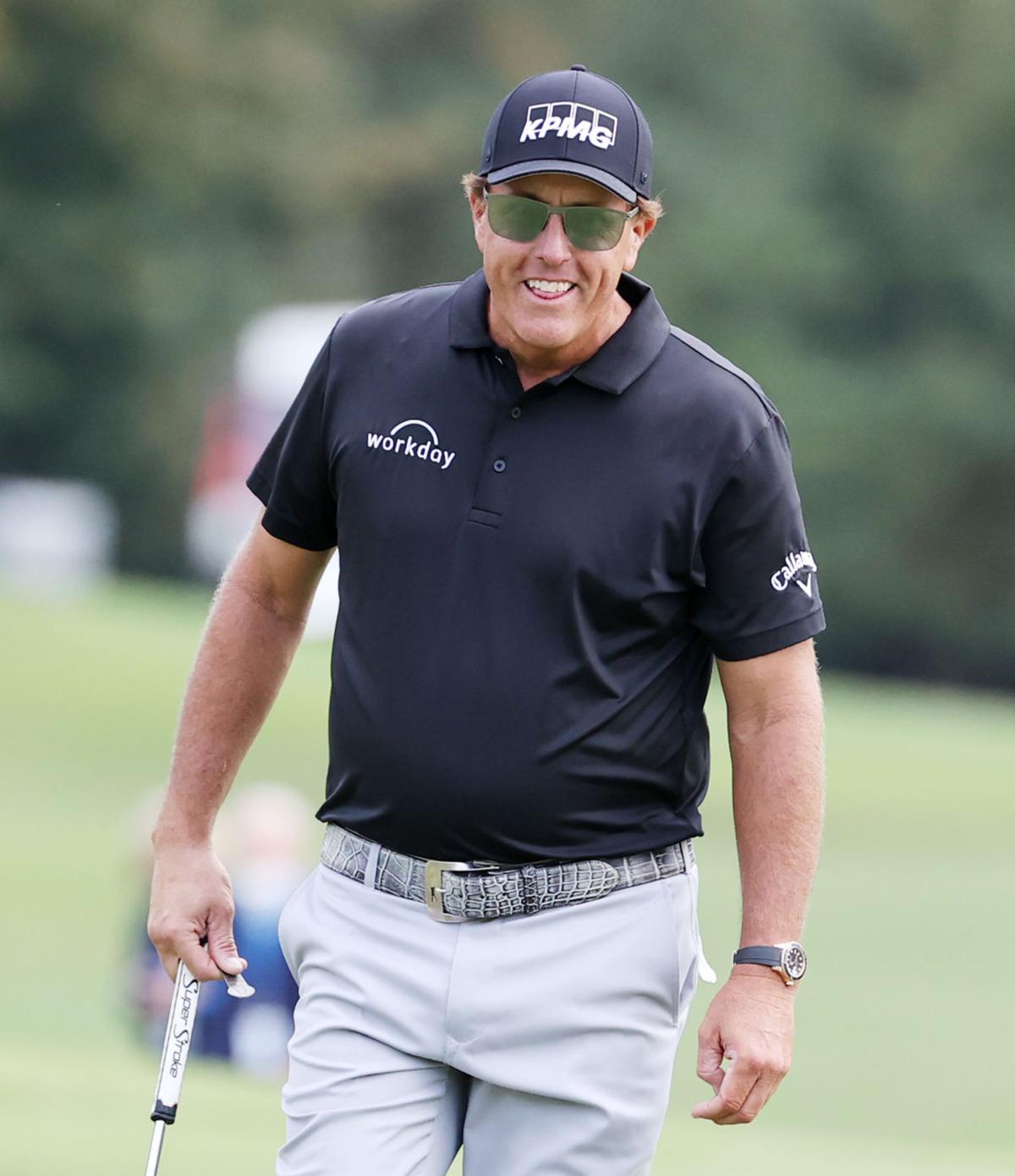 Phil Mickelson shot a final-round 7-under-par 65 to claim a three-stroke victory in the Dominion Energy Charity Classic at the Country Club of Virginia’s James River Course on Sunday. 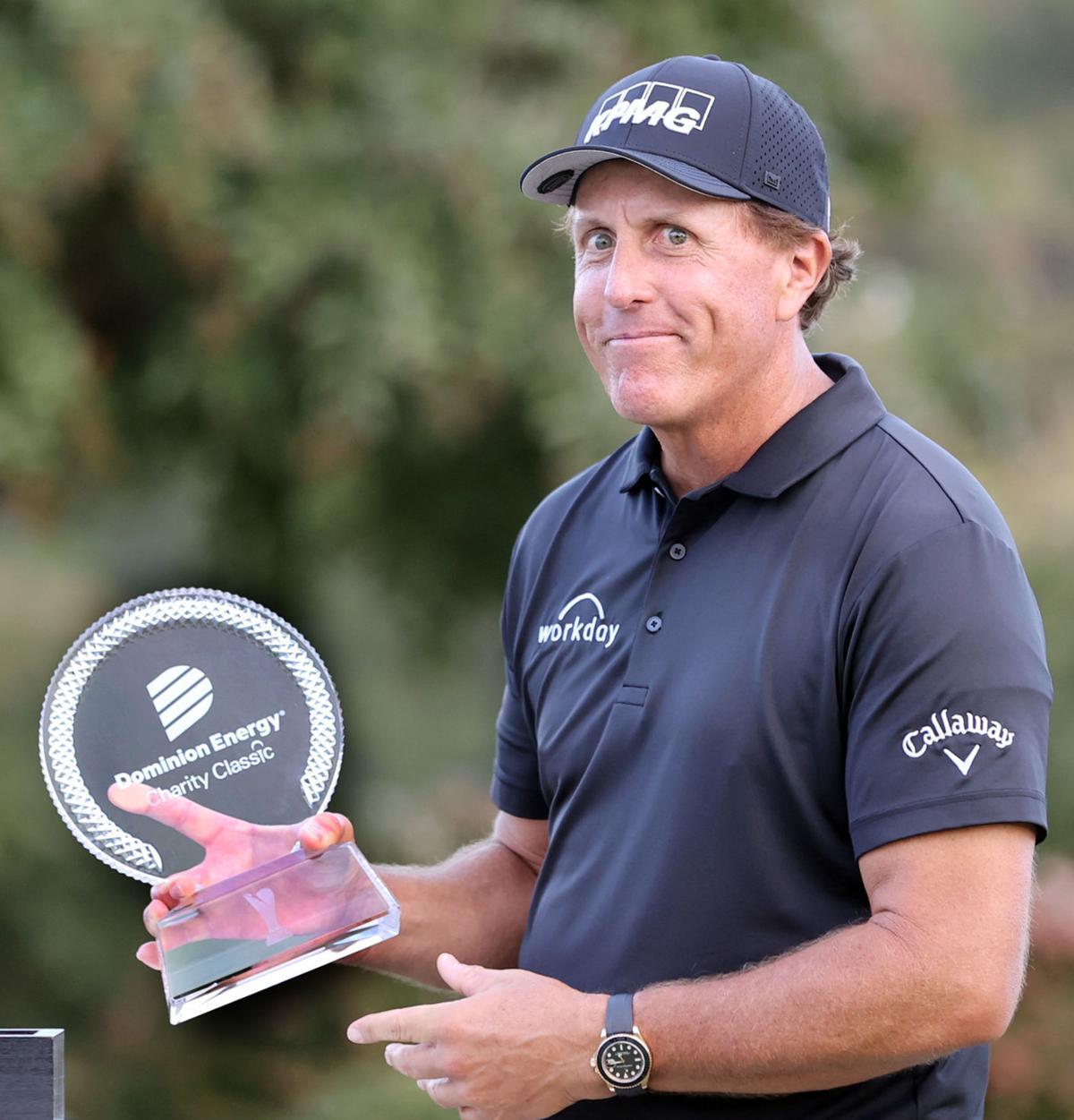 Winner Phil Mickelson picks up the trophy in the Dominion Energy Charity Classic at the Country Club of Virginia in Richmond, Virginia, on Sunday, October 18, 2020. 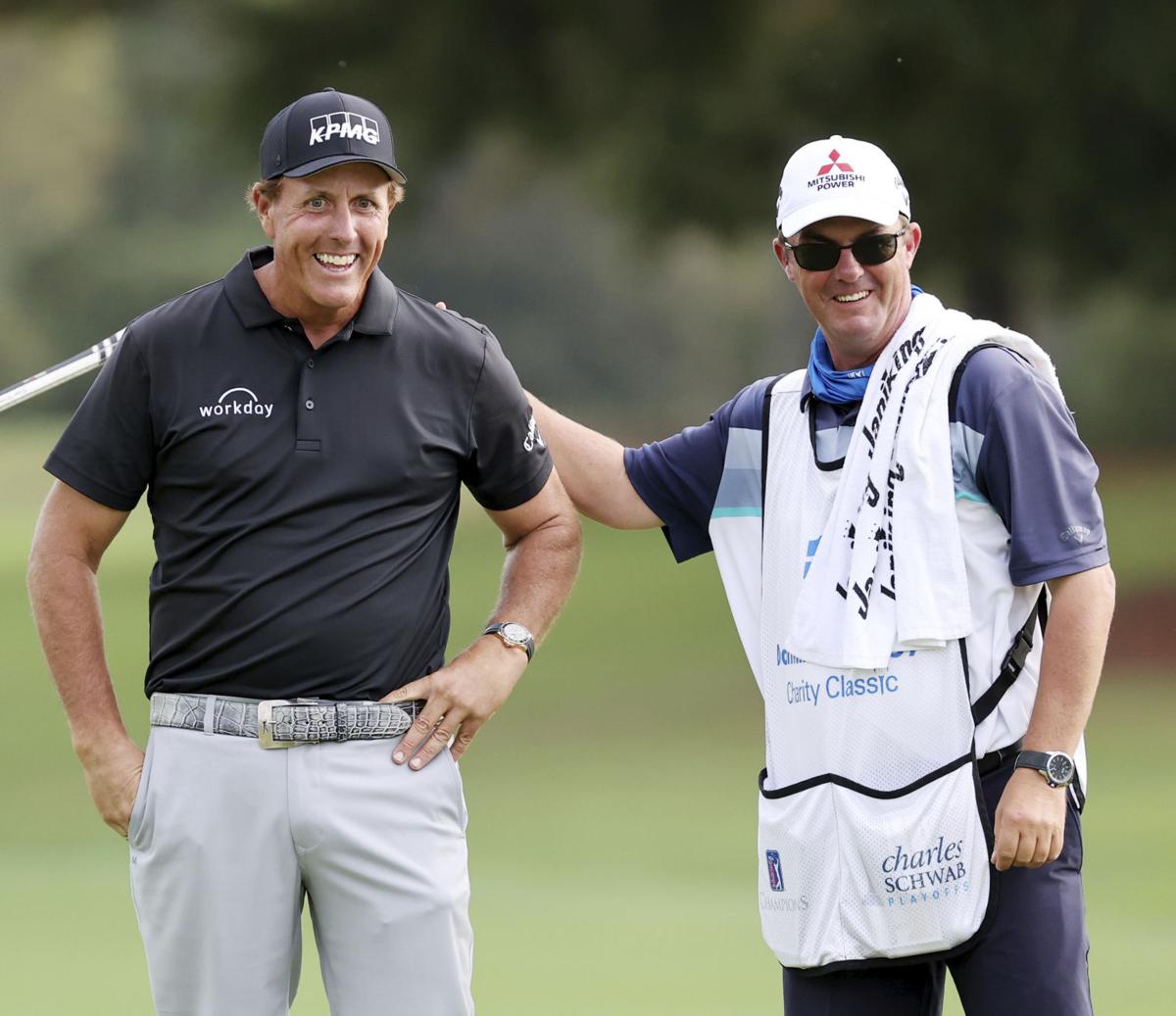 Phil Mickelson (above) gets a pat on the back from Jeff Johnson, the caddie for Retief Goosen, in the final round of the Dominion Energy Charity Classic. Mickelson (below) shows off the trophy after his second title in as many PGA Tour Champions starts.

The PGA Tour Champions record book has a new entry.

Phil Mickelson posted a 54-hole total of 17-under-par 199 to win the $2 million Dominion Energy Charity Classic on Sunday and become the third player in PGA Tour Champions history to win in his first two starts on the senior circuit.

Bruce Fleisher was the first to do it in 1999 and stood alone for 21 years before Jim Furyk and Mickelson accomplished the feat in the eight tournaments that have been played since the PGA Tour Champions resumed play in late July.

The Dominion Energy Charity Classic is usually the first tournament in the Schwab Cup playoff series. Because the Champions Tour combined the 2020 and 2021 seasons into one, there are no playoff events and there were no spectators at the Country Club of Virginia’s James River Course.

When Mickelson, a World Golf Hall of Fame member, tapped in for birdie on the 18th hole for a final-round, 7-under-par 65, the gallery consisted of tournament volunteers, various media and Golf Channel personnel.

“It’s fun for me to come out here and play well and this is a good start for me as I try to build a little bit of momentum heading to Augusta in about a month. I put a new driver into play this week, trying to get a little more pop, a little more carry. It was a little wayward at times, but it was also effective in allowing me to play this course the way I wanted to, which was aggressively,” Mickelson said. “There were some good things that came of it, and I also identified some areas I’ve got to work on. All in all, it was a really fun, successful week.”

Mickelson began Sunday’s round three strokes behind fellow left-hander and rookie Mike Weir, who, at 13-under, was the 36-hole leader. Mickelson logged four birdies in the first eight holes, then hit one of those wayward tee shots out of bounds on the par-5 ninth.

Mickelson bogeyed and Weir made birdie to draw even at the turn. Weir took the lead with a birdie on the difficult 12th hole, but Mickelson drew even with a birdie at No. 13. Playing aggressively, Mickelson hit his tee shot into the middle of the green on the short par-4 15th.

“It was the best swing of the day for me. The 3-wood there and the 4-iron on 16 [second shot on the par 5], those were the two best swings that I hit flush, right on line,” said Mickelson who two-putted both for birdies to get to 16 under.

Mickelson saved par out of the sand on No. 17 and two-putted for birdie on the par-5 18th for the win.

“I played well enough to win, I just didn’t putt good enough. Phil played great, and I knew I was going to have to shoot a good score to win and my putter was just poor,” said Weir, who closed with 71 and a 14-under total of 202.

Mickelson’s length off the tee gave him “a huge advantage when you’re carrying the ball that far…I think anytime you have length like that, we see in the way the game’s played now, it’s a big advantage,” Weir added.

Notes: Kenny Perry and Robert Karlsson shared the lowest score of the final round (64) to finish tied for sixth and tied for ninth, respectively. Karlsson’s round featured a double-eagle 2 on the par-5 18th hole.

Furyk scored back-to-back eagles at 15 and 16 to tie for 13th. Richmonder Bobby Wadkins, playing on a sponsor exemption, finished with par 72 for 222. Ernie Els, a World Golf Hall of Fame member, tied for ninth at 10-under and continues to lead the Schwab Cup standings.

There are only three more tournaments on the 2020 portion of the PGA Tour Champions schedule.

Martinsville Speedway will allow just 1,000 fans in its grandstands for its Nov. 1 NASCAR Cup Series race.

W&M's shift comes as it faces a lawsuit that points out flaws in the school's discontinuation plan.

Last Wednesday, Nick Sherod was among the University of Richmond players involved in a spirited workout at the school’s recently opened Queall…

Phil Mickelson shot a final-round 7-under-par 65 to claim a three-stroke victory in the Dominion Energy Charity Classic at the Country Club of Virginia’s James River Course on Sunday.

Winner Phil Mickelson picks up the trophy in the Dominion Energy Charity Classic at the Country Club of Virginia in Richmond, Virginia, on Sunday, October 18, 2020.

Phil Mickelson (above) gets a pat on the back from Jeff Johnson, the caddie for Retief Goosen, in the final round of the Dominion Energy Charity Classic. Mickelson (below) shows off the trophy after his second title in as many PGA Tour Champions starts.